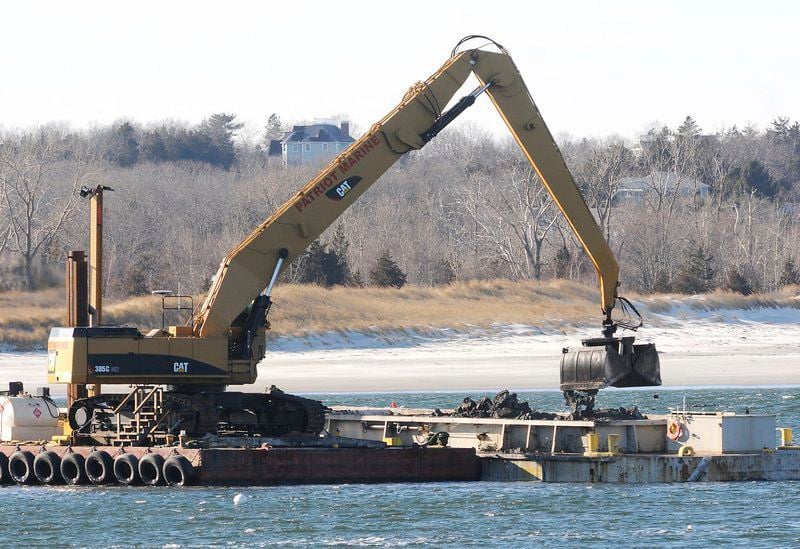 PAUL BILODEAU/Staff photo. Dredging continues in the Annisquam River. This barge is set up off of Wingaersheek Beach. 1/9/20 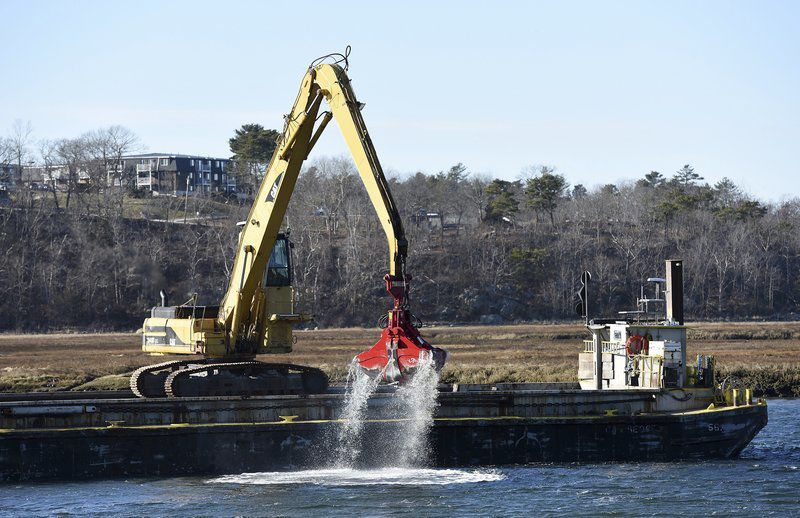 PAUL BILODEAU/Staff photoDredging continues in the Annisquam River. This barge is set up near Cape Ann’s Marina Resort off Essex Avenue.

PAUL BILODEAU/Staff photo. Dredging continues in the Annisquam River. This barge is set up off of Wingaersheek Beach. 1/9/20

PAUL BILODEAU/Staff photoDredging continues in the Annisquam River. This barge is set up near Cape Ann’s Marina Resort off Essex Avenue.

The dredging of the Annisquam River is proceeding smoothly through its first season, with about half of the targeted sand and debris already removed from shoals along the the city’s lifeblood river, according to Gloucester Harbormaster T.J. Ciarametaro.

Ciarametaro briefed Waterways Board members on Wednesday night, telling them the three-dredge, around-the-clock project being managed by the U.S. Army Corps of Engineers is done dredging areas around Thurston Point. Now, he said, the project is concentrating on areas in and around Lobster Cove, the Blynman Canal channel and Wolf Hill.

“It’s moving right along,” Ciarametaro told the board members. “We still anticipate coming back next year, but the work then probably won’t be of the magnitude of the work being done now.”

Ciarametaro said the latest update from contractors pegged the amount of material removed from the river bed at about 85,000 cubic yards, which is about half the amount targeted by the Army Corps of Engineers to help return the federal channel to a fully navigable waterway.

The harbormaster also said the $7.85 million project has received a two-week extension that will allow this season’s dredging to continue until Feb. 15. After that, he said, the Army Corps of Engineers and contractors will concentrate on demobilizing equipment and completing surveys on dredged areas to update navigation charts and buoy patterns.

He said the work in the area of the Blynman Canal, known locally as the Cut, represents the most delicate stage of the project because work is highly dependent on the tides. That has restricted the times of day the crews can dredge.

The dredging of other portions of the river channel will remain an around-the-clock operation.

The speedy pace of the work contrasts distinctly with the long-awaited project’s somewhat rocky beginning.

The city and project managers had hoped to begin the work in October, but a budget shortfall of $2.4 million forced them to delay the project while they scrambled to secure additional funding. Ultimately, the administration of Gov. Charlie Baker provided $2.4 million from a state dredging fund.

Still, the actual dredging didn’t begin until around the middle of November.

Ciarametaro also briefed the Waterways Board on the combined $1.6 million project to build out a new harbormaster office and the city’s new visiting boating center at Solomon Jacobs Park on Harbor Loop.

He said workers are concentrating on completing plumbing and electrical work before moving on to the actual construction phase of the project, which is scheduled to be completed on or before Memorial Day.

The work forced Ciarametaro and his staff to relocate the harbormaster office’s administrative functions to a small space within the city’s Veterans Service Center at 12 Emerson Ave.