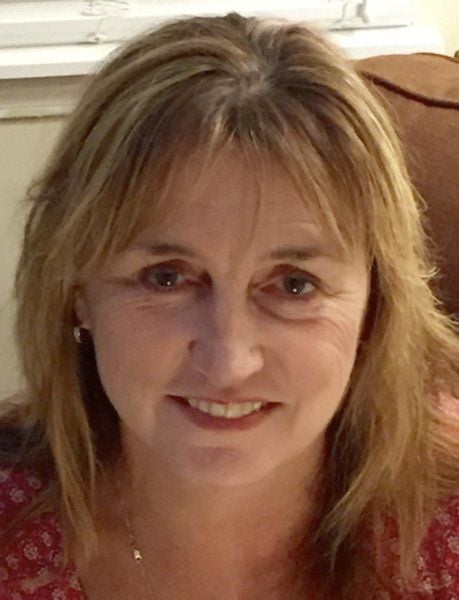 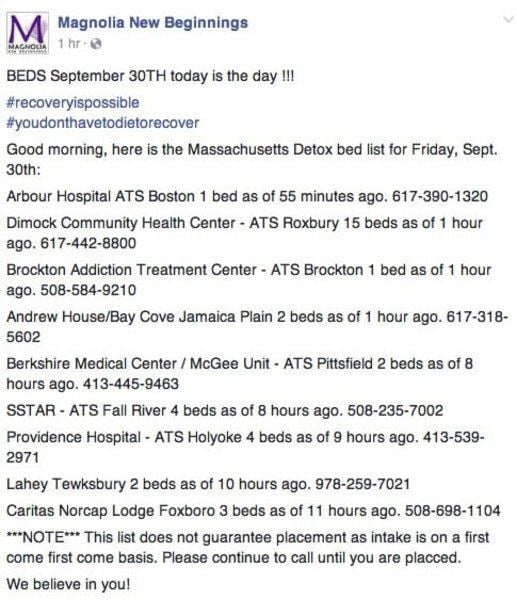 Maureen Cavanagh hasn’t watched the viral video of a local mother overdosing in a dollar store with her 2-year-old daughter in tow.

But through a 12,000-person-strong network she founded, the Marblehead mother quickly learned that Mandy McGowen, 36, of Salem, New Hampshire, needed treatment — and she needed it fast.

“I knew I could find her a bed,” said Cavanagh, who founded Magnolia New Beginnings, a North of Boston nonprofit that now, four years after its inception, has veins throughout the country.

Utilizing its website, carefully managed and maintained pages on Facebook, and a “chain reaction” network, Magnolia helps addicts and their families navigate their way through treatment, recovery and grief, Cavanagh said.

Magnolia posts the location of open treatment beds each day. While cases can be less dramatic than McGowen’s, Cavanagh said the need “goes on all day long on the pages, with people helping each other.”

“In this case, someone who knew Mandy posted on the N.H. Magnolia site,” she said.

McGowen, the mother in the video, is now in a private center that specializes in “very intensive treatment,” Cavanagh said.

The $30,000 cost is covered by a generous donor, she said, and McGowen is working hard and embracing treatment.

On Sept. 20, the Gloucester Daily Times’ sister paper, The Eagle-Tribune, first posted the story and video of McGowen and her toddler.

This provoked intense reaction, but police, firefighters and ambulance workers were not shocked.

The video underscores what they see every day in this opioid crisis.

“You hate to hear about these kinds of incidents,” said Paul Brennan, director of Lawrence General Hospital’s pre-Emergency Services.

He recalled an ambulance crew finding a little girl in pajamas as police arrested her parents on drug charges. The child was taken to the hospital to be evaluated. The ambulance crew bought her Barbie dolls and coloring books, he said.

On another occasion, a crew encountered a child whose parents had promised to get “beach pizza.” Those plans were derailed when the parents were arrested, and the child put into an ambulance.

“So our crew went to Tripoli’s and bought the beach pizza,” he said.

Already this year, Narcan, the opioid and heroin overdose reversal drug, has been used more than 350 times by Lawrence General Hospital ambulance crews.

“With overdoses, it doesn’t matter what day of the week it is. We could be out there right now on a call,” he said. “Unfortunately, it’s an everyday occurrence.”

Kayla Quigley, 21, and Michael Schneider, 26, driving a white Chevy Impala, were pulled over by detectives. Two children, ages 2 and 3, were in the back seat, according to a police report.

When questioned by a detective, Schneider said he paid $20 cash “to score heroin.”

“The children were in the Chevy while Michael purchased the illegal narcotics and were only a few feet away from where their father had two needles in the front seat of the Chevy,” wrote Detective Chad Lawlor, a member of Street Narcotics Enforcement Unit.

Quigley and Schneider both were arrested on drug and child endangerment charges.

Child endangerment is wanton or reckless conduct that creates a substantial risk of injury to a child, explained legal expert Michael Coyne, dean of the Massachusetts School of Law in Andover.

In Lawrence, drug detectives have charged individuals with child endangerment along with drug offenses 14 times this year, including Quigley and Schneider’s case.

In Massachusetts, police officers who see a child in a dangerous situation, such as being present when a parent overdoses, are required to file an immediate alert with the Department of Children and Families.

Drug detectives in Methuen have filed eight such alerts this year. North Andover police have alerted DCF about a child safety issue five times this year; three of those instances involved an arrest or overdose, police said.

After McGowen overdosed, DCF was notified and her 2-year-old daughter taken into emergency custody.

A judge in juvenile court, which is closed to the public, will determine if the girl will remain in state care or be returned to family.

Lawrence police have also said they are seeking a child endangerment charge against McGowen. A hearing in Lawrence District Court will be held in the near future.

‘We believe in you’

On Thursday there were detox beds open at a number of places, including facilities in Tewksbury, Foxboro, Jamaica Plain and Worcester.

This was posted on Magnolia’s Facebook page with words of encouragement.

“Please continue to call until you are placed. We believe in you,” it read.

Cavanagh said the Facebook pages, website and words shared by Magnolia members all echo the group’s mission: that no one should suffer alone or be unable to find help in whatever form is needed.

“We want to be able to help people who need help, who feel they have nowhere to turn, nowhere to ask,” Cavanagh explained.

Cavanagh said she knows how isolating these situations can be.

In 2012, she founded Magnolia New Beginnings after feeling alone and vulnerable dealing with her own daughter’s struggles with “a substance abuse disorder, a recurring brain disease.”

“I don’t want anyone to ever feel the way I felt,” she said.

Cavanagh does not use the word “addict.” Instead she refers to substance abuse disorders. Changing the language also is part of her mission.

She urged the public to remember McGowen, like many others, “is a mom with a disease.”

“These are people who love their children. But they are caught in the middle of a bad disease. And they still can’t stop. They need help,” she said.