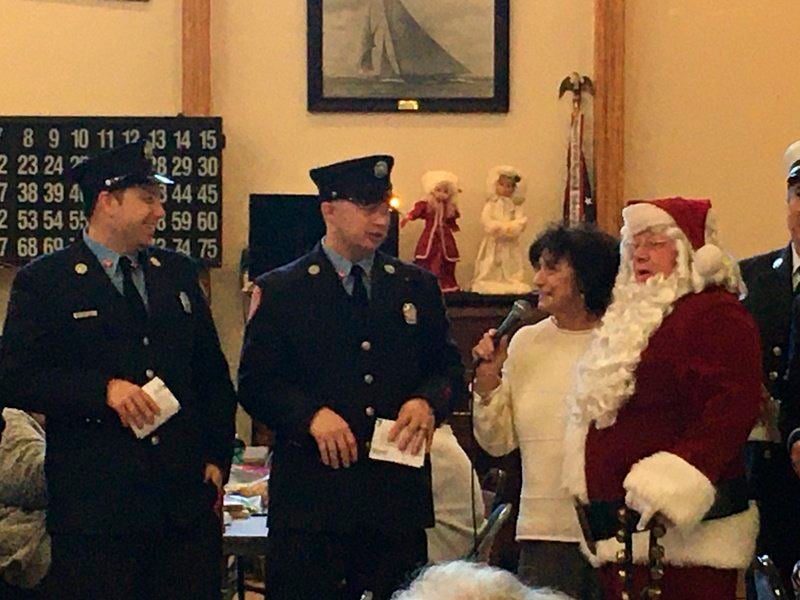 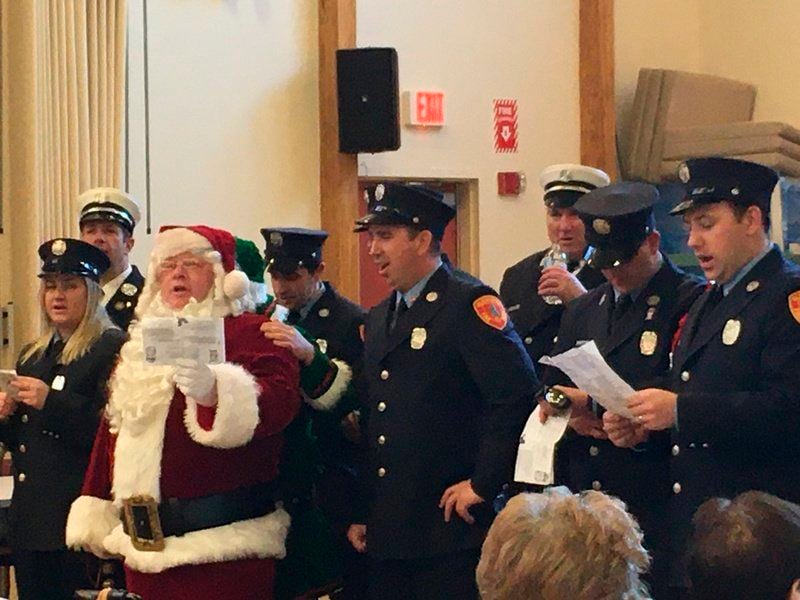 Dressed as Santa Claus, Frank LeClerc sings alongside other Gloucester firefighters at the Rose Baker Senior Center on Friday. It was LeClerc's 20th year of caroling with the firefighters. Photo by Taylor Ann Bradford

Dressed as Santa Claus, Frank LeClerc sings alongside other Gloucester firefighters at the Rose Baker Senior Center on Friday. It was LeClerc's 20th year of caroling with the firefighters. Photo by Taylor Ann Bradford

For Rockport resident Jeannette Johnson, 91, this holiday season is extra special as she spends it with her new boyfriend Kenny Aptt, 89, of Gloucester.

Having lost their significant others years ago, Johnson and Aptt began dating and the rest is history.

"We get along fine together," Johnson smiled, leaning toward Aptt. "Christmas will be a nice time."

The couple were two among many spectators at the Rose Baker Senior Center on Friday to be serenaded with holiday classics by Gloucester Firefighters Local 762.

"It raises your spirits and makes you feel very happy," Johnson said. "They give us so much of their time to do this ... and they've got good voices."

As songs like "I'll Be Home for Christmas" were sung with sincerity, other tunes such as "Jingle Bells" were boisterously exclaimed with hands in the air and a little bit of dancing by Santa Claus.

Spectators joined in at times, clapping their hands and singing along.

For more than 40 years, members of the Gloucester Fire Department have selected a day to spread Christmas cheer to the city they serve.

"We typically see people on their worst day, so for us to be able to go out to the community and see people for something positive is really special not only for us but for them as well," Firefighter Andrew Lyons said.

In years past, the firefighters have traveled to nursing homes, shut-ins, and hospitals. Lyons said the festivities are strictly run by the union and not sponsored by the city.

"It is something that the guys look forward to all year and there have actually been fights about what day it is going to be because everyone wants to be involved," Lyons joked.

While most firefighters were dressed in their traditional uniform, Anthony Dellacroce and Frank LeClerc traded in their suits and polished shoes for something a little more festive.

Dellacroce fashioned a green elf suit while LeClerc took on the role of Santa Claus.

LeClerc admit that suiting up as Santa comes with challenges.

"The beard and the wig get a little itchy by the end of the day, but it's fine," LeClerc said, explaining how he has enjoyed going around the city and spreading Christmas cheer with his colleagues for the past 20 years.

With a wave of many hands and the jingling of sleigh bells, the firefighters exited the senior center and embarked for their next musical performance of the day: City Hall.

"They do come every year and we look forward to them coming," said Lucy Sheehan, the executive director of the senior center. "It brings a lot of joy for everyone to see them coming."

"It is a highlight," she said.