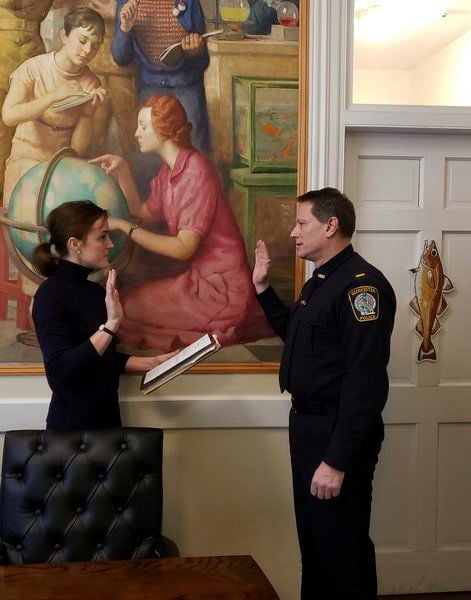 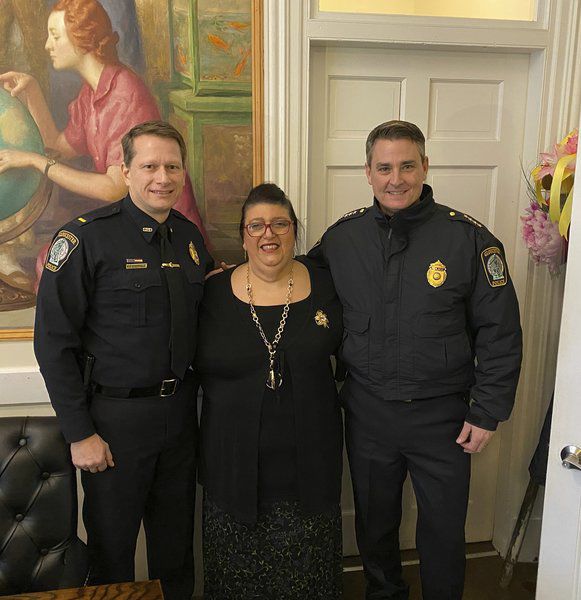 Courtesy photo/Joseph Fitzgerald, left, has been promoted to assistant chief for the Gloucester Police Department. He is pictured with Mayor Sefatia Romeo Theken and police Chief Edward Conley III.

Courtesy photo/Joseph Fitzgerald, left, has been promoted to assistant chief for the Gloucester Police Department. He is pictured with Mayor Sefatia Romeo Theken and police Chief Edward Conley III.

Fitzgerald, 52, will be responsible for "overall planning, administration and operation of the department," according to police Chief Edward Conley III. He also will supervise the department's arduous accreditation process.

Conley said Fitzgerald's promotion is the first in a series of moves in an overall reorganization of the department.

"His promotion is the first domino in our mission to make us more efficient and organized," Conley said on Monday. "I'm excited for the future and direction of the department with Joe as my assistant chief."

Fitzgerald is a 30-year law enforcement veteran who has spent the last 27 years with the Gloucester police. Previously, he served as a corrections officer for the Essex County Sheriff's Department and as a police officer in Rowley.

He is a graduate of Gloucester High School and earned a master's degree in law enforcement from Western New England University.

Fitzgerald was the department's senior lieutenant. He served as its operations lieutenant since 2018, responsible for the day-to-day operation of the department, and had been its head of detectives.

"I am grateful for this opportunity to continue the work I love in my hometown community," Fitzgerald said. "I take this responsibility very seriously and look forward to the work ahead."

Fitzgerald was sworn into his new position Monday morning by Grace E. Poirier, an assistant city clerk. He signed a three-year contract for the position that pays $140,000. The contact also can be lengthened by two separate one-year extensions.

"I have complete confidence that Assistant Chief Fitzgerald will excel in this new role," said Mayor Sefatia Romeo Theken. "He is well-known, well-respected, trusted and gives the department the internal continuity needed to keep moving in a positive direction."

Fitzgerald is the department's first assistant chief since October 2016, when then Assistant Police Chief John McCarthy was elevated to interim police chief when then-police Chief Leonard Campanello was ousted, and a budget crunch prompted the city to not fund the position in fiscal 2017 and 2018.

McCarthy later was named permanent police chief before retiring last March. He now serves as a councilor at-large on the Gloucester City Council.

A recommendation of a 2010 audit by the New Hampshire-based Municipal Resources Inc. called for the position to be filled. The city choose to wait until McCarthy retired and Conley came on board to fill the job.