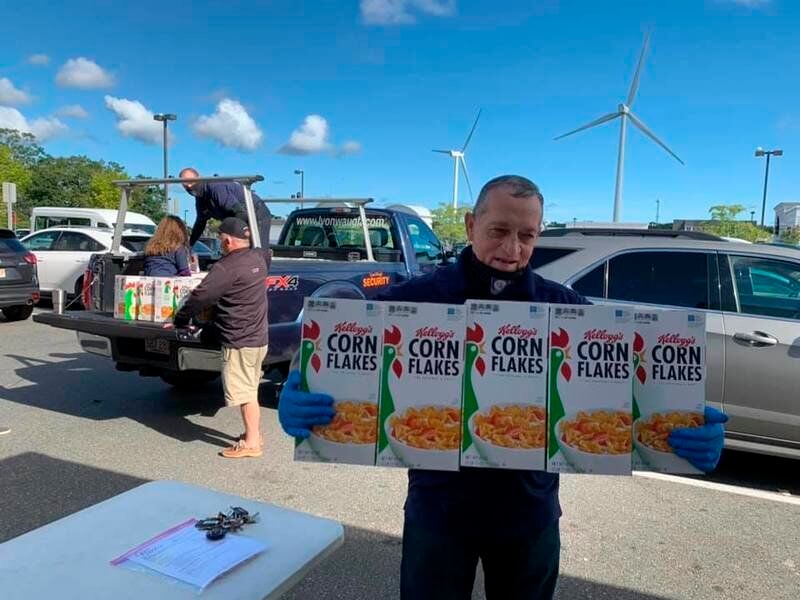 Courtesy photoTito Rodriguez, a member of the Gloucester Police Department's Community Impact Unit, carries an armful of cereal boxes donated at Saturday's food drive by Gloucester resident Warren Waugh of the Peabody-based Lyons-Waugh Auto Group. Waugh showed up outside Market Basket with a pickup truck full of corn flakes for The Open Door. 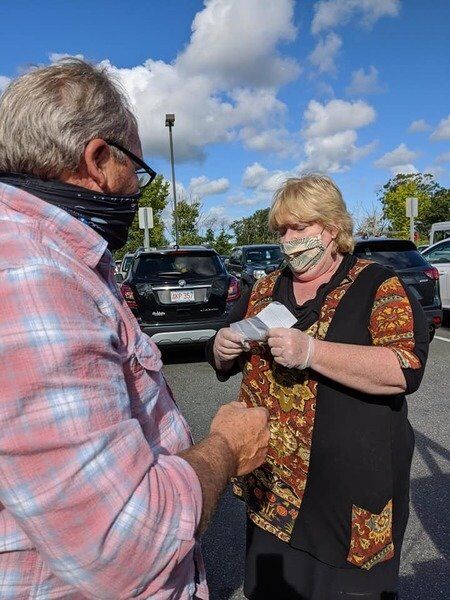 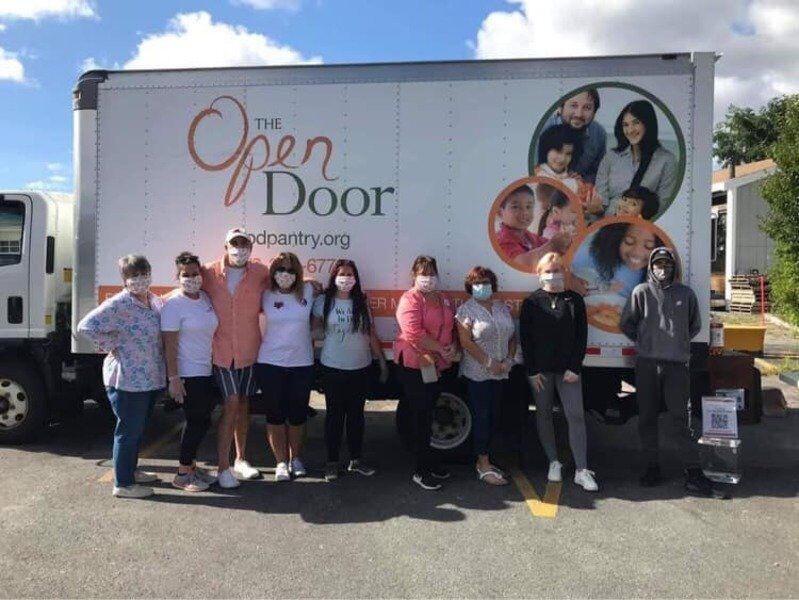 Courtesy photoThe Open Door reports that it collected more than 15,000 pounds of food at its Saturday food drive at three different locations in Gloucester and Rockport, which was run in partnership with local service groups in both communities.

Courtesy photoTito Rodriguez, a member of the Gloucester Police Department's Community Impact Unit, carries an armful of cereal boxes donated at Saturday's food drive by Gloucester resident Warren Waugh of the Peabody-based Lyons-Waugh Auto Group. Waugh showed up outside Market Basket with a pickup truck full of corn flakes for The Open Door.

Courtesy photoThe Open Door reports that it collected more than 15,000 pounds of food at its Saturday food drive at three different locations in Gloucester and Rockport, which was run in partnership with local service groups in both communities.

A food drive Saturday brought in a whopping 15,000-plus pounds of food and more than $11,000 for Cape Ann's leading anti-hunger organization.

"We didn't know what to expect," admitted Julie LaFontaine,  executive director of The Open Door, which operates food pantries in Gloucester and Ipswich in addition to other programs.

Her organization is no stranger to food drives, she noted, but in the midst of the COVID-19 pandemic and across three different locations that morning, it wasn't certain what the outcome might be. To make it as contact-free as possible, The Open Door made it a drive-through event and supplied large donation bins where the food items could be sorted later.

"It was steady business all day long," she said. "The outpouring was tremendous." She noted there was a "friendly rivalry" going on between some collection sites, but "in the end it was the community that won."

The food drive, which ran between 8 a.m. and 1 p.m. at Market Basket and the Building Center in Gloucester, and Crackerjacks in Rockport, was hosted in partnership with the Gloucester Police Department's Community Impact Unit, the We Are All in This Together Gloucester community action group, Awesome Rockport and the Rockport Exchange.

LaFontaine said September is also Hunger Action Month and the food drive was a local effort as part of that national campaign.

There was also great variety of food that was donated, she said — from the typical non-perishable items such as cereal, tuna fish, juice and peanut, to people responding to the call for coffee, cooking oil, baking mixes and other household staples that The Open Door doesn't get a lot of at the pantry.

"People are giving from their place of sufficiency, whatever it may be, whether it's $5 and a can of tuna or $5,000 and a case of tuna," LaFontaine said.

As for that friendly rivalry, Lt. Jeremiah Nicastro, who heads up the Community Impact Unit, kept the lighthearted competition going both before and during the food drive. But he also noted how closely his team works — even "hand in hand" at times — with We Are All in This Together to provide services and help to people in need.

"We are all this together," Nicastro said, noting his police unit's job is to help improve the quality of life for Gloucester's residents, and "there's no better way to do that than to collaborate and partner with other community agencies" on efforts like this.

Nicastro said his site at Market Basket — which was staffed by himself, school resource Officers Peter Sutera and Mike Scola, Officer Michal Cimoszko, Tito Rodriguez, Nicastro's daughter Milee, and mother Rosalee Nicastro — a retired food inspector — did bring in the largest haul of the day, at close to 6,900 pounds of food. That was in part thanks to "huge" donors Warren Waugh, a Gloucester resident and co-founder of the Lyon-Waugh Motor Group, and City Councilor Sean Nolan.

He also added a reminder about the stuff-a-cruiser drive for Thanksgiving: "Don't rest, because we're coming back in November."

At The Open Door, LaFontaine said the requests for food assistance have been steadily ticking upward again since August. This coincides, she said, with the end of the $600 per week federal unemployment boost.

In the early days of the pandemic this spring, she said, the organization saw "unprecedented numbers" of new clients, but then those numbers declined into the summer. She noted, however, there was a five-fold increase in the number of meals provided for The Open Door's annual summer meals program for kids.

Going forward, with a lot of uncertainty about any further comprehensive federal relief packages, LaFontaine said, The Open Door and many organizations are not sure what to expect as the pandemic rolls onward.

"We're planning for winter and a long road to economic recovery," she said.

John Castelluccio may be contacted at jcastelluccio@gloucestertimes.com