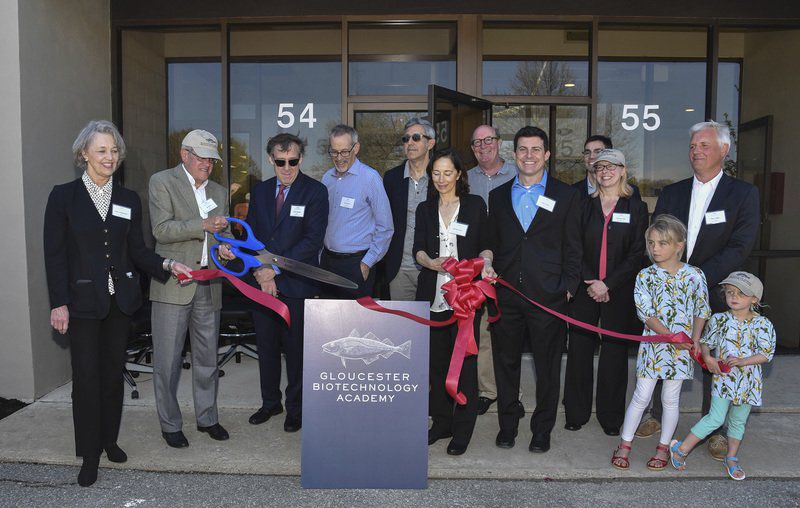 Education Advisory Council Co-Chairman Joe Rosa cuts the ribbon at the opening of Gloucester Biotechnology Academy at 55 Blackburn Center on Saturday morning. The Gloucester Marine Genomics Institute opened the academy, which is designed to produce market-grade biotechnology technicians and workers for the burgeoning industry.Desi Smith/Staff photo 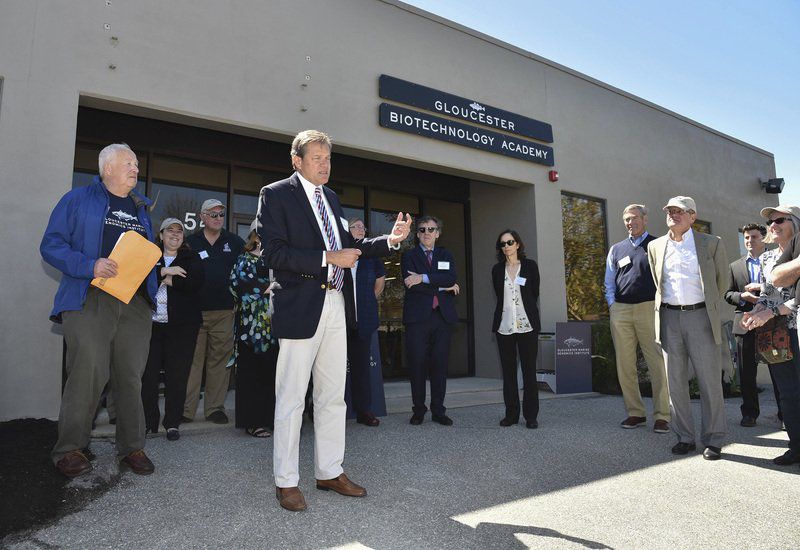 Desi Smith/Staff photoArchitect George Marsh, second from left,  of Payette, a leading architectural design firm in Boston, speaks to a group of supporters and donors during a ribbon-cutting ceremony at the openning of Gloucester Biotechnology Academy at 55 Blackburn Center on Saturday morning. The Gloucester Marine Genomics Institute opened the academy, which is designed to produce market-grade biotechnology technicians and workers for the burgeoning industry. 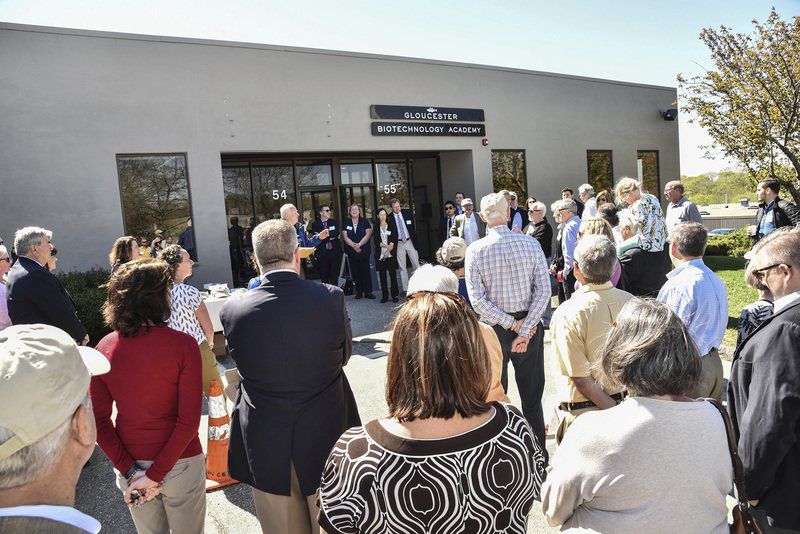 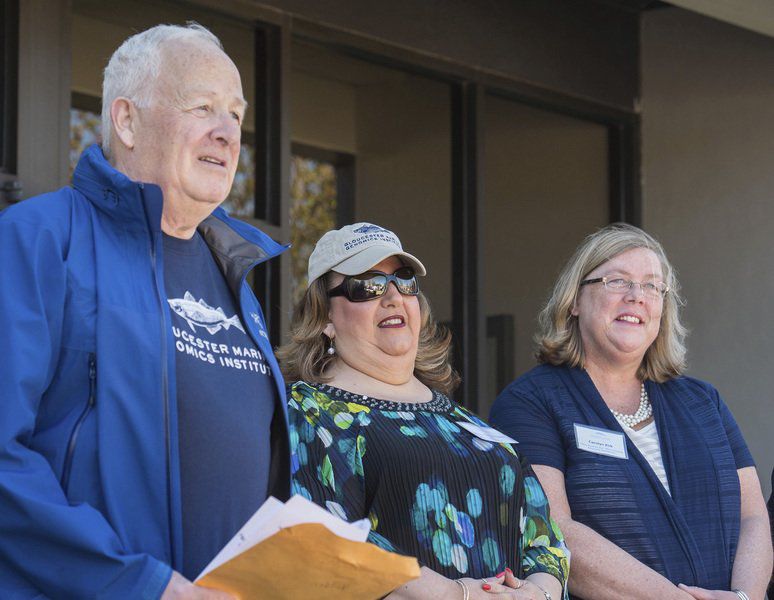 Education Advisory Council Co-Chairman Joe Rosa cuts the ribbon at the opening of Gloucester Biotechnology Academy at 55 Blackburn Center on Saturday morning. The Gloucester Marine Genomics Institute opened the academy, which is designed to produce market-grade biotechnology technicians and workers for the burgeoning industry.Desi Smith/Staff photo

Desi Smith/Staff photoArchitect George Marsh, second from left,  of Payette, a leading architectural design firm in Boston, speaks to a group of supporters and donors during a ribbon-cutting ceremony at the openning of Gloucester Biotechnology Academy at 55 Blackburn Center on Saturday morning. The Gloucester Marine Genomics Institute opened the academy, which is designed to produce market-grade biotechnology technicians and workers for the burgeoning industry.

They opened the doors to the Gloucester Biotechnology Academy on Saturday, uncovering a portal to the future for students from Gloucester, Cape Ann and beyond interested in working in the life sciences field of biotechnology.

The morning ceremony at the academy’s site in the Blackburn Industrial Park, finally and mercifully warmed by the sunshine of one of the first real days of spring, celebrated first the genesis and then the execution of the vision forged by the founders and executives of Gloucester Marine Genomics Institute (GMGI).

“It’s just an extraordinary day, an exciting day,” said Michele May, chairwoman of GMGI’s board of directors.

For GMGI, the academy is the pathway element of its stated mission of providing educational, scientific and economic benefits to Gloucester by creating a biotech hub on Cape Ann separate from established clusters in Boston and Cambridge.

The curriculum and the 3,200-square-foot facility, designed for free by noted Boston architect and Essex resident George E. Marsh Jr., are designed to produce the next cadre of biotech technicians.

On Saturday, the interior held the energy of the new, even without the impending presence of the actual lab equipment, computers and students.

Marsh said when he first encountered the space at 55 Blackburn Center, his initial thought was, “Let’s expose it.”

“Be frugal and be rugged, kind of like Gloucester is a little bit,’’ he said of the airy, open space.

In a more ethereal sense, the opening ceremony for the academy on Saturday, hosted by former Mayor John Bell, was as much about the art of community cartography as it was about the advent of a new education facility.

Scattered throughout the crowd of about 50 invited guests were many of the tributaries of support that appear on the evolving map of Gloucester’s future — folks such as Molly and John Byrnes, Beth and Linzee Coolidge, and Joe and Maggie Rosa. The McNiffs, John and Jay, were instrumental in providing the space.

They are some of the folks that, almost a decade ago, first began wrestling — a cage match to be sure — with the vision of Gloucester’s future against its fishing past.

“This idea has been circling the community for some time,” said state Senate Minority Leader Bruce Tarr, R-Gloucester. “But it was always a question of ‘What if?’ Well, ‘What if’ has become ‘What is’.”

Speaker after speaker complimented the vision of the GMGI principals — Gregory L. Verdine, Marc Vidal and David R. Walt. They also lauded the vanguard of city residents and officials who engaged in the conversation and lent their resources — sometimes financial, sometimes intellectual and oft times both — to the effort.

“We have all of these incredible people in our midst,” Verdine said. “These are people who love Gloucester for Gloucester and care about its future. They don’t want to make it into a theme park.”

The events leading to Saturday began under the Bell administration. The vision gathered momentum under the succeeding seven-year run of former Mayor Carolyn Kirk, who in her current role as state deputy secretary of housing and economic development, stood in for Gov. Charlie Baker on Saturday.

Local businesswoman Sheree Zizik, of Cruiseport Gloucester and the Beauport Hotel, joined on, and it bloomed still under current Mayor Sefatia Romeo Theken.

“I can remember talking to Marc Vidal in his living room about how we get something like this going in Gloucester,” Kirk said.

So much of it seemed to be mapped out in living rooms, an organic twist that lends itself nicely to the tongue-and-groove nature of Gloucester, before being molded and chiseled by GMGI into what state Rep. Ann-Margaret Ferrante of Gloucester called “one of those bright-spot moments.”

“Nobody came to the table and said ‘What’s in it for me’?” Ferrante said.

May said GMGI has 10 applicants for the maximum 20 spots in the inaugural class, and will be content if the incoming class size stays right there, particularly in the shake-down cruise of the first year in which students won’t have to pay a dime for tuition or fees.

Classes are set to begin the first week of September, when what started in so many living rooms so many years ago will emerge from the theoretical into the tangible — the first step of another organic trail in which GMGI seeks to create and develop its own workforce ahead of the industry curve.

“We’re going to teach them the good, practical skills they need to succeed in this field,” Verdine said. “A lot of time, people look at science and think it’s too lofty or inaccessible. That’s just nonsense. We think this gives Gloucester an advantage, even in competing against Boston and Cambridge.”