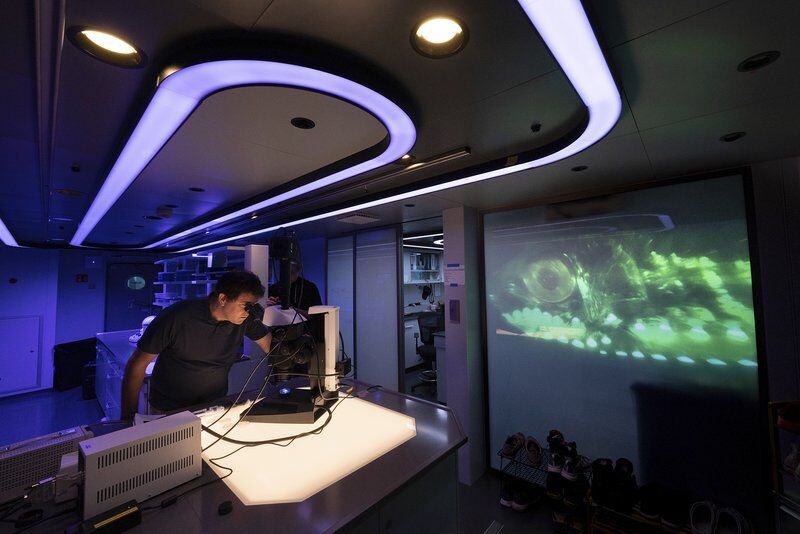 ANDY MANN/OceanX/ The Gloucester Marine Genomics Institute willl partner with OceanX on new research of the seas. Here, OceanX Vice Chairman Dr. Vincent Pieribone prepares a sample to be viewed under the microscope on the OceanXplorer, OceanX's research vessel. 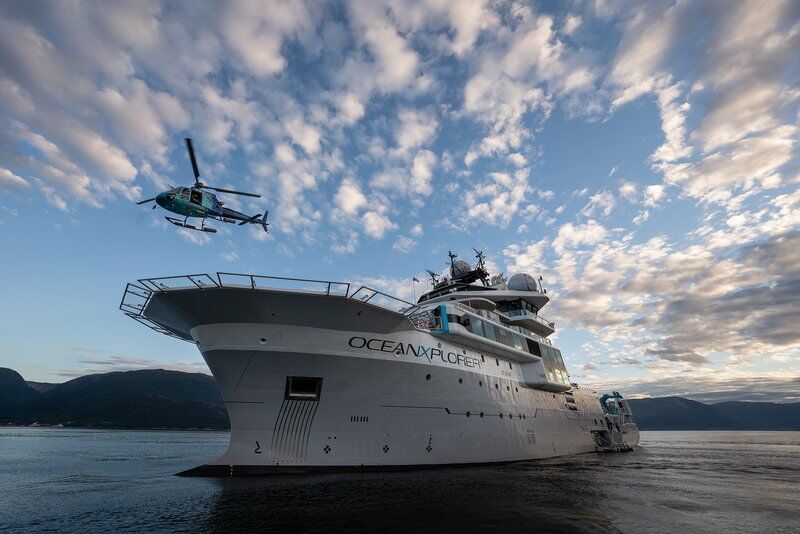 ANDY MANN/OceanX/ The Gloucester Marine Genomics Institute willl partner with OceanX on new research of the seas. This OceanX's research vessel, OceanXplorer, in the fjords of Norway.

ANDY MANN/OceanX/ The Gloucester Marine Genomics Institute willl partner with OceanX on new research of the seas. Here, OceanX Vice Chairman Dr. Vincent Pieribone prepares a sample to be viewed under the microscope on the OceanXplorer, OceanX's research vessel.

ANDY MANN/OceanX/ The Gloucester Marine Genomics Institute willl partner with OceanX on new research of the seas. This OceanX's research vessel, OceanXplorer, in the fjords of Norway.

In a move that could greatly expand its profile internationally, the Gloucester Marine Genomics Institute in 2021 will partner with marine explorer OceanX on missions of aligned research interests.

Bolzan said the partnership, which has been more than a year in the making "is really a recognition for our shared passions for these scientific and research pursuits and this type of investment."

The collaboration, she said, will draw on the complimentary strengths of GMGI and OceanX to produce groundbreaking ocean exploration and analysis that will be shared with the public through OceanX's sophisticated storytelling and media platforms.

"Hopefully, we'll be able to tell these stories in compelling ways to capture the global imagination," Bolzan said. "This should give us tremendous reach."

The two organizations have committed to partnering on several ocean research projects. Bolzan said she and GMGI Science Director Andrea Bodnar are set to meet next Monday with counterparts from OceanX to begin hammering out details of potential projects in 2021.

She said one potential area of collaboration is research into some of the longest-living species in the ocean, such as bowhead whales (which may live up to 200 years) and Greenland sharks (which may live more than 400 years) to "further understand the aging process and the evolution of extreme longevity."

In OceanX, GMGI is partnering with a heavy hitter in marine exploration.

OceanX was founded in the summer of 2018 by Ray Dalio, founder of the world's largest investment hedge fund, Bridgewater Associates, and his son Mark Dalio, who also serves as creative director for OceanX.

It is an affiliate of the family's Dalio Philanthropies and not connected with Elon Musk's SpaceX except in the spirit of natural exploration.

"I believe that ocean exploration is both more important and more exciting than space exploration and that OceanXplorer will show the world that this is true," Ray Dalio said in announcing the creation of OceanX.

OceanXplorer is the affiliate's flagship research vessel, a 286-foot former petroleum supply and survey ship that has been retrofitted to its new tasks.

It boasts four deep-sea exploration vehicles, including two manned Triton submersibles capable of diving 3,280 feet and remaining at that depth for eight hours. It also is equipped with a remotely operated underwater vehicle and an autonomous underwater vehicle that can reach almost 20,000 feet in depth.

"They have the capacity to go to places all over the world that were unreachable in the past," Bolzan said.

The ship also has a helicopter and helipad, as well as towable sonar arrays.

They are outfitted to allow researches to engage in micropsy, genetic sequencing, biofluorescent imaging and sample visualization.

"We are ecstatic to be pursuing a partnership with Gloucester Marine Genomics Institute, an organization dedicated to addressing the challenges facing our oceans, human health and the environment through groundbreaking scientific research,” said Vincent Pieribone, Vice Chairman, OceanX. “We have a shared motivation and interest in the ocean and look forward to merging the expertise of GMGI with our science, technology and media teams to produce much needed ocean science and storytelling.”