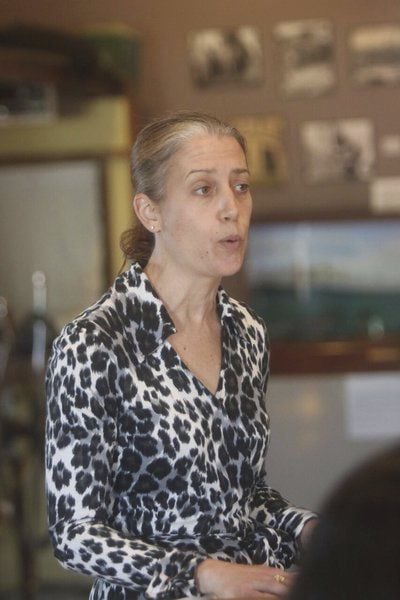 Kimberlee Cloutier-Blazzard, speaking at Maritime Gloucester Women’s forum in October, will attend the Women’s March on Washington on Jan. 21 with her family.Allegra Boverman/Courtesy photo 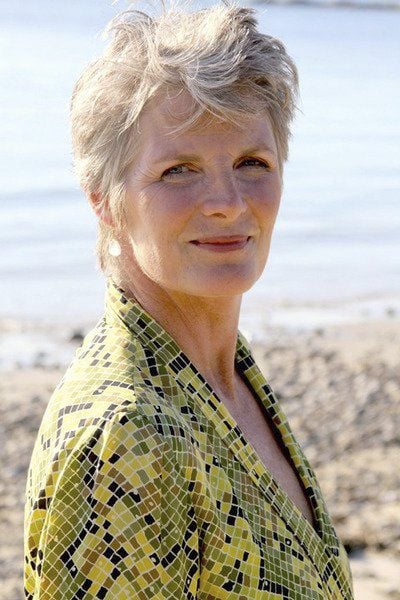 Courtesy photoGloucester’s JoeAnn Hart will be traveling by bus with her daughters and a friend to participate in the Women’s March on Washington on Jan. 21.

Kimberlee Cloutier-Blazzard, speaking at Maritime Gloucester Women’s forum in October, will attend the Women’s March on Washington on Jan. 21 with her family.Allegra Boverman/Courtesy photo

Courtesy photoGloucester’s JoeAnn Hart will be traveling by bus with her daughters and a friend to participate in the Women’s March on Washington on Jan. 21.

“What do women want?” asked Sigmund Freud famously. And the answer, at least here on Cape Ann, seems not to be Donald Trump.

That said, as Jan. 21’s Facebook-fueled post-inaugural Women’s March on Washington nears and the ranks of local demonstrators swell, in at least one Gloucester household, not all of them are women.

“I said I was going and then my husband surprised me and said he wanted to go too,” says Kimberlee Cloutier-Blazzard, whose 6-year-old son will also make the 440-mile trip to the nation’s capital, along with his two teenage sisters.

“All five of us are heading down,” says Cloutier-Blazzard, an unabashed feminista who teaches at Simmons College in Boston, serves on the board at the Sargent House Museum, grows and cans her own vegetables, and recently founded WECANN (Women’s Equality on Cape Ann), an activist group that began as a spin-off from a forum she organized Oct. 15 at Maritime Gloucester to commemorate the centennial of Gloucester’s Sargent House Museum.

The event included keynote speaker Judith McHale, former undersecretary of state for diplomacy and public affairs under Hillary Clinton. Clinton’s loss was not, says Cloutier-Blazzard — an ardent Bernie Sanders supporter until the Vermont senator dropped out of the race — what motivated her to join the Washington march. But something McHale said definitely gave her a push.

McHale, recalls Cloutier-Blazzard, related how, as the young daughter of an American diplomat living in Apartheid South Africa, she witnessed the direct effect voter apathy had on racist policies. “It was striking when she said that,” says Cloutier-Blazzard, “and it burned into my consciousness as I tried to make sense of each new day of (the transition). The costs are just too great with silence.”

Local author and community activist JoeAnn Hart puts it another way. “We are all,” wrote Hart in an email to the Times, “going to let the world know that women are watching what the new administration is doing with women’s rights, gay rights, and human rights, and we’re ready to act.”

Hart, who is traveling to D.C. on a Skedaddle bus organized by International Music’s Jody Sundquist, says that although her bus was filled long ago, “there’s another Skeddale bus leaving from Gloucester, too. Ours is full, maybe the other one is too, but I’ll bet they both take waiting lists.”

Hart said that, like the Cloutier-Blazzard household, lots of locals will be driving down. A 70-seat “Rail to the Rally” Amtrak train car, organized by U.S. Rep. Seth Moulton, D-Salem, was filled long ago, she added. And carpooling, fueled by Facebook postings, is catching on fast.

At Gloucester’s Unitarian Universalist Church, Janet Parsons and Robin Newhall are organizing attendance at the Boston Women’s March For America, one of scores of national and international “sister” events planned for the same day, this one starting at 11 a.m. on Boston Common.

Both Cloutier-Blazzard and Hart have knit Pussyhats — bright pink, knitted hats with cat ears — expected to be worn by tens of thousands of demonstrators participating in a coast-to-coast Facebook-fueled knitting-bee. “I have crocheted Pussyhats for my group on the bus,” says Hart, “including my daughters and their friends, and a friend who is flying in from Michigan to go to D.C. on our bus.”

“This is not an anti-Trump rally, but it is anti-racism, anti-classism; it’s not anti-Trump, it’s pro-America,” says Cloutier-Blazzard. “It’s about issues that are already ominously arising even before the inauguration: Obamacare, Russia, Putin, abortion, climate change.”

And it’s about another kind of climate change, she says, a new political climate that actually makes people like her afraid to exercise their American freedom of speech. “We grew up in the post-Nixon, post-Vietnam era, so we didn’t have this sort of protest, and I think a lot of people are already afraid, thinking ahead to possible retribution. But we have to take a stand. When this came up I said, ‘I’m going’. I could do no other, I could do no other.”

Cloutier-Blazzard’s husband Howard was incredulous, she says, “that I was initially shocked that he wanted to go.” In an email, Howard Blazzard wrote, “It surprises me that in the 21st century this (women’s rights are human rights) is even a question. Women’s Equality should be like air, water — a given. There is NO rational case against it, and anything that IS against it is anti-HUMAN.” The election and political climate had, he said, snapped him out of his apolitical apathy and “the myriad of concerns that occupy my mindspace.”

Joann Mackenzie may be contacted at 978-675-2707, or at jmackenzie@gloucestertimes.com.

What: The Women’s March on Washington, D.C., a massive, staged demonstration on the first full day of Trump’s presidency. Men and children are also welcome, to “send a bold message to our new administration on their first day in office, and to the world that women’s rights are human rights. We stand together, recognizing that defending the most marginalized among us is defending all of us.” Feminist icon Gloria Steinem is a co-sponsor. Others attending include Amy Schumer, Samantha Bee and Jessica Chastain; 10,000 Bay Staters expected to participate.

When: Saturday, Jan. 21, 10 a.m. to 5 p.m. Starting at the intersection of Independence Avenue and Third Street SW, near the U.S. Capitol, proceeding toward the Washington Monument (official route released at later date as security precaution). The permit issued by Washington police says participants will disperse at the southern part of the Ellipse near the White House, at Constitution Avenue between 15th and 17th streets NW.

Getting there: For information on buses bound for The Womens March on Washington, visit: www.letskedaddle.com/events/6183#

By air or rail: Flights and trains are fully booked, but you can always check for cancellations.

By car: If you are not driving yourself, post a notice on Facebook that you are looking to carpool to Washington.

To march locally: Boston Women’s March For America, one of scores of national and international sister events,  takes place on Boston Common on Jan. 21, at 11 a.m. Gloucester’s Unitarian Universalist Church is organizing participation. Contact Robin Newhall at 978-457-2331 or robin.newhall@verizon.net, Janet Parsons at rev.janetparsons@gmail.com, or the church office 978-283-3410 for information. Visit www.bostonwomensmarchforamerica.org.