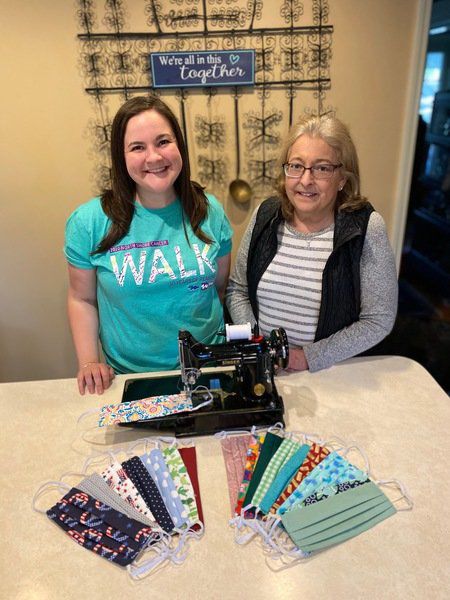 Vicki Mori, left, and her mother, Carol, with some of the masks they've made to help raise money to support Vicki in her annual North Shore Cancer Walk fundraiser. 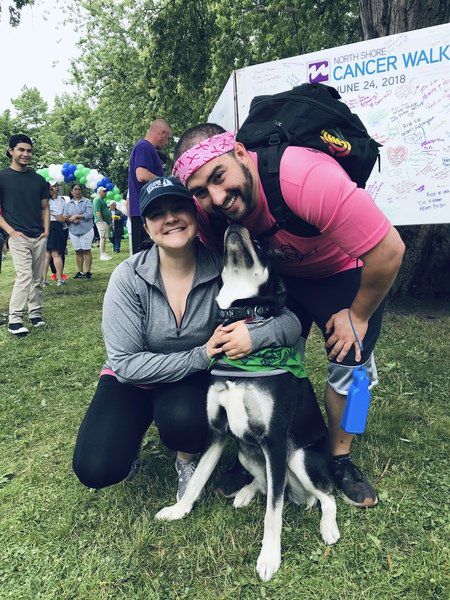 While continuing to fundraise for the rescheduled North Shore Cancer Walk in September, Vicki Mori plans on walking the course on her birthday, Aug. 15, with her boyfriend, Lucas, and their dog, Blu. 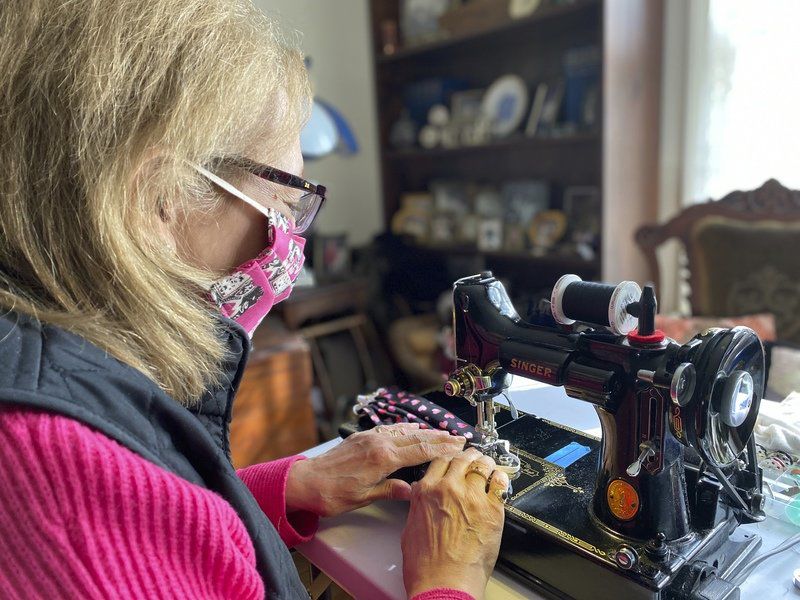 Vicki Mori, left, and her mother, Carol, with some of the masks they've made to help raise money to support Vicki in her annual North Shore Cancer Walk fundraiser.

While continuing to fundraise for the rescheduled North Shore Cancer Walk in September, Vicki Mori plans on walking the course on her birthday, Aug. 15, with her boyfriend, Lucas, and their dog, Blu.

BEVERLY — Victoria "Vicki" Mori of Beverly was hoping to raise $2,020 for her sixth year walking in the North Shore Cancer Walk in honor of her mother, Carol, who receives regular treatments at the Mass General/North Shore Cancer Center, which benefits from the proceeds of the event.

But the COVID-19 pandemic changed Vicki Mori's plans, both in terms of her efforts to raise money and her participation in the cancer walk itself, which has gone virtual in its 30th anniversary year.

Somehow, Carol's grandmother's 1941 sewing machine has been pressed into service, with mother and daughter making masks to protect people from the spread of coronavirus in exchange for a donation to the walk to fight cancer.

When the pandemic hit, Vicki had to put various fundraisers on hold as the North Shore Cancer Walk, regularly held in June, became a virtual event and was extended to Sept. 13.

Participants and teams are being asked to walk 6.2 miles sometime between now and the walk date and share that experience on social media. Teams might walk with members doing so at a safe distance, or they might walk apart but together via video chat.

The hope is to share these experiences with a video presentation and a broadcast from the cancer center in Danvers on Sept. 13.

Instead of many teams making the walk together, "this year, we all have to be one big team walking together," said Susan Lausier, senior development officer at North Shore Medical Center, and the walk's manager.

Carol Mori had been diagnosed with Stage II breast cancer in 1998 at a time when she had three young children, with Vicki being the youngest.

"It took me by surprise, but I decided I wouldn't let this stop me," said Carol, who works as the archivist for the Patton Homestead in Hamilton. She underwent treatments and chemotherapy, and with no recurrences, was discharged from the cancer center.

However, the cancer came back in 2012 and metastasized to her bones. The year after her mother's second cancer diagnosis, Vicki Mori took part in the walk for the first time. Carol Mori has lost some lung function, so she can't do the walk.

"She's my legs," Carol said of her daughter.

Vicki, a legislative aide for state Senate Minority Leader Bruce Tarr of Gloucester, was hoping to raise $2,020 as an individual donor this year. She had a number of fundraisers planned, including a spin class at Inner Cycle in Beverly.

At the start of the pandemic, a close family friend and neighbor, Meg Kelley, suggested Carol and Vicki sew masks, with non-medical face coverings coming into high demand. They were trying to figure out a way to do it virtually because they could not be together. Vicki even owns a small craft business that makes pouches, tote bags and reusable bottle sacks called Simply Good Karma.

Not long after, Kelley's husband, well-known philanthropist and community leader Don Kelley, contracted COVID-19 and died March 29 at age 61. The husband and father was a longtime member and former president of Rotary International's Beverly chapter, president of Wayside Trailers in Peabody, and a board member of Harborlight Community Partners.

This "big loss" for the community was the impetus for the mother and daughter to sew masks, Vicki Mori said. They make them with Don Kelley in their thoughts.

They came up with a mask concept that was easy to make in bulk, and so far have stitched together 850 of them.

The first 600 masks were sewn for people, by word of mouth. They asked those who wanted one to make a donation to Vicki's participation in the North Shore Cancer Walk, and so far they've raised more than $6,500 toward a goal of $10,000 (If you want to learn more, go to nsmc.rallybound.org/vickimori).

And this is where Carol's grandmother's 1941 sewing machine comes in, as 99% of the masks have been made on it. While she has a modern sewing machine, Carol prefers to sew with her vintage model.

Vicki says she's not waiting until Sept. 13 to take her walk. Instead, she plans to walk the traditional route on her birthday, Aug. 15, with her boyfriend, Lucas, and their dog, Blu.

Lausier said it's important to continue fundraising for the North Shore Cancer Walk, because the money raised stays on the North Shore for such things as clinical trials and wellness programs.

Ethan Forman may be contacted at eforman@gloucestertimes.com