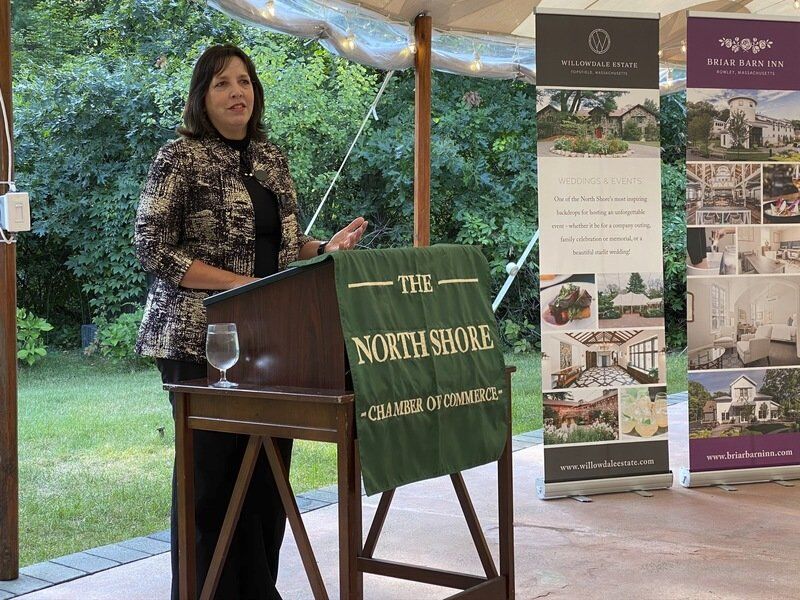 Salem Mayor Kim Driscoll speaks at the annual State of the Region Address at Willowdale Estate in Topsfield.Photo courtesy of North Shore Chamber of Commerce 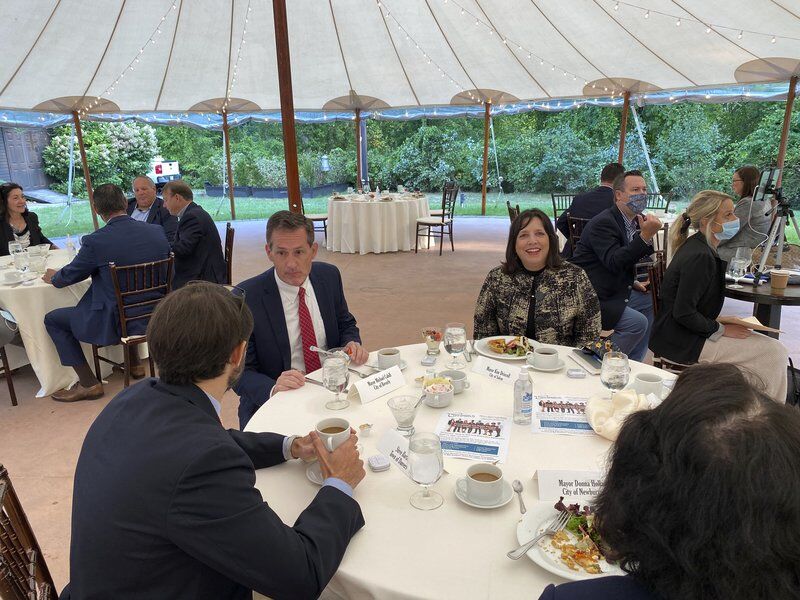 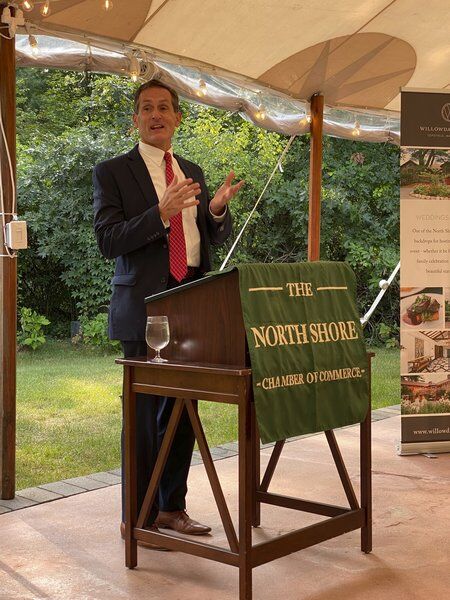 Salem Mayor Kim Driscoll speaks at the annual State of the Region Address at Willowdale Estate in Topsfield.Photo courtesy of North Shore Chamber of Commerce

TOPSFIELD — At the 2020 State of the Region Address on Wednesday, the state of the region was all too evident just by looking at the small, masked gathering sitting at spaced-out tables under an outdoor tent.

In a normal year, the annual event featuring short talks by the area's mayors would be held before a crowd of more than 350 people packed into a ballroom at the Danversport Yacht Club. This year, host North Shore Chamber of Commerce opted for an outdoor venue at Willowdale Estate in Topsfield and limited the number of people to 50, with another 150 watching on Zoom.

While the coronavirus pandemic was the unavoidable No. 1 topic, the six mayors and one town manager who spoke said they have continued to conduct everyday business while also dealing with the enormous needs created by the crisis.

"We still have to keep the lights on, pick up the trash, open the schools and make sure we're supporting our community," Danvers Town Manager Steve Bartha said.

The municipal leaders all said they have been trying to offer as much support as possible in their communities, from free lunches for senior citizens to financial assistance for small businesses. Salem Mayor Kim Driscoll said the crisis has brought people together in many ways.

"It's really renewed the social compact in all the places that we live," she said. "We're relying on each other. I wish it didn't happen this way, but it's really changed the way we've done things."

Driscoll said many changes that have been made due to the pandemic could become permanent, like showing meetings on Zoom as a way to increase public engagement.

"We'll never do without Zoom," she said.

Beverly Mayor Mike Cahill pointed to outdoor dining as another feature of the pandemic that will live on. "It's been such a hit," he said.

Cahill urged people to continue eating outdoors even as the weather turns colder.

"Let's tough it up," he said. "I've been to Copenhagen Thanksgiving week. People sit outside for dinner with their hats and their gloves and their winter jackets on and they have a blast. I'm excited to eat outdoors in December."

Driscoll said Salem is now focused on October and dealing with the unknowns surrounding what is usually a large influx of people for Halloween and the monthlong Haunted Happenings. She noted that Halloween this year falls on a Saturday, on the start of Daylight Saving Time — "and it's a full moon."

"We know folks are still coming," Driscoll said. "We've had a fairly busy summer, more local and regionally. There will be a lot of audibles this year. What are the crowds going to look like and how are we going to keep people from gathering in large groups? Our streets are built with historic nooks and crannies and don't always lend themselves to lines. We've got a whole plan for that."

Driscoll advised anyone coming to Salem to "have a plan."

"Reservations are going to be required for everything," she said.

Peabody Mayor Ted Bettencourt noted the big changes going on at the Northshore Mall, which is undergoing a $110 million expansion. The project will include a new wing similar to the outdoor MarketStreet mall in Lynnfield, and a fitness center that includes fields and pools, he said. It is scheduled to open in the spring of 2021.

"It's going to bring hundreds of more jobs to that important facility," Bettencourt said.

Newburyport Mayor Donna Holaday said she had "a little bit of anxiety" about the State of the Region event being held in person. But she said the chamber did a "beautiful job" with the setup, including limiting the seating to three or four people per table, and was glad to finally see her colleagues in person.

Bettencourt said the mayors and town managers have been talking more and relying on each other for support more than usual as they all try to cope with the pandemic.

"We have some superstar mayors and town managers in this region," Bettencourt said. "We've all become really good friends."

Staff writer Paul Leighton can be reached at 978-338-2535, by email at pleighton@salemnews.com, or on Twitter at @heardinbeverly.