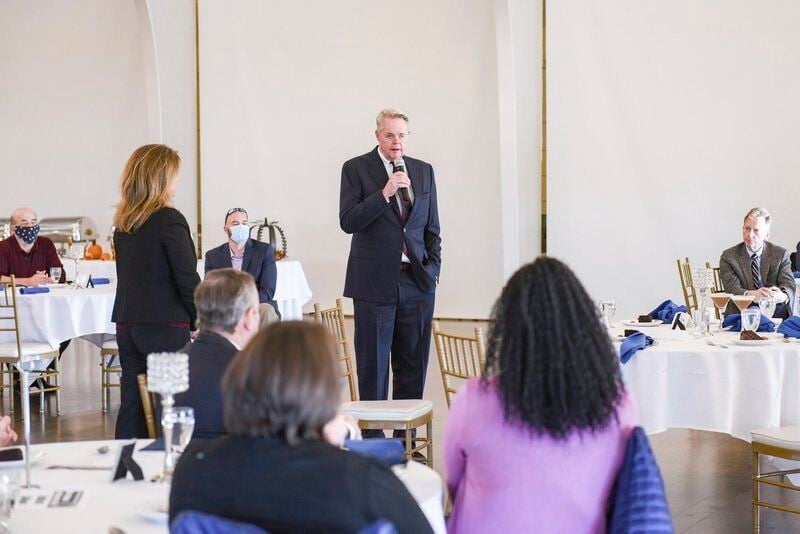 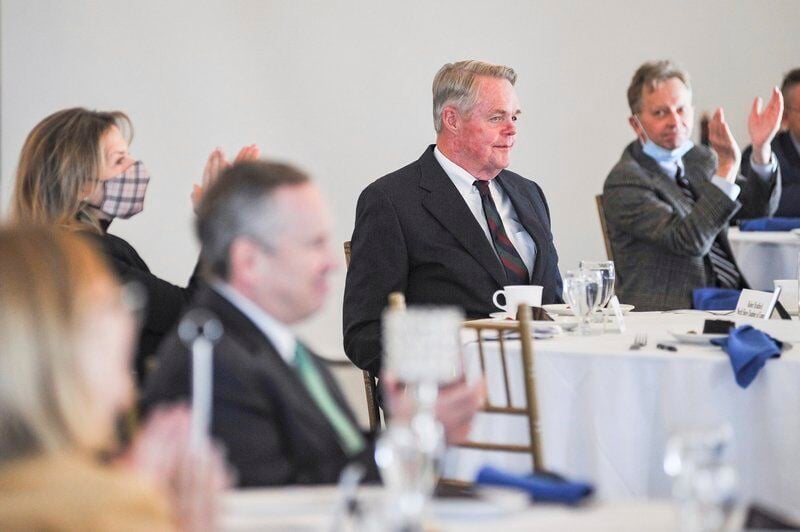 JAIME CAMPOS/Staff photoGuests give outgoing North Shore Chamber of Commerce President Robert Bradford a round of applause during the meeting. 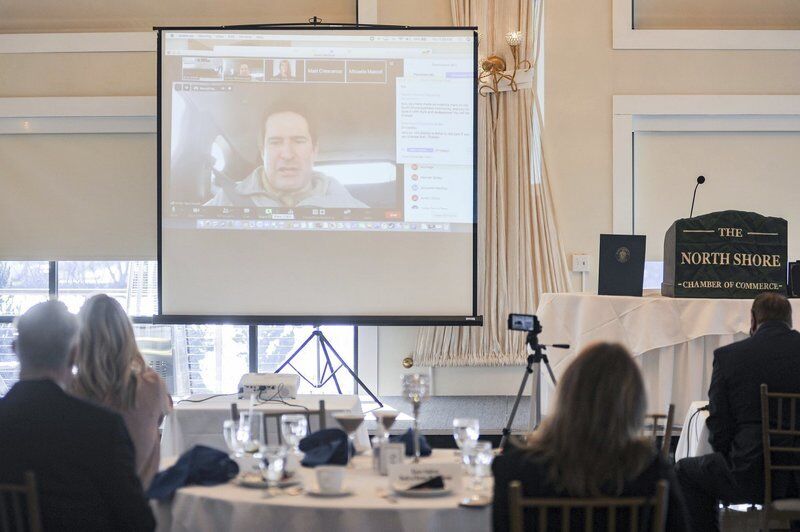 JAIME CAMPOS/Staff photoGuests give outgoing North Shore Chamber of Commerce President Robert Bradford a round of applause during the meeting.

"He's a star, but he also makes everyone around him much better," said Alexander, chairperson of the chamber's nominating committee, of Bradford. "It isn't just the staff — chamber officers, directors were all better as a result."

Bradford was the honoree Thursday during the chamber's annual meeting, which was limited to 25 guests in person at Danversport while many others attended via Zoom. The meeting also focused on the work ahead to pull the region through the COVID-19 pandemic.

Bradford was 28 when he was hired in 1980 to lead what was then the Beverly Area Chamber of Commerce. Now 68, Bradford announced his plans to retire in September. Thursday's annual meeting was Bradford's last.

Steven DiSalvo, president of Endicott College in Beverly, announced that the school has created an annual scholarship in Bradford's honor. Starting in 2021, the Robert G. Bradford Community Leadership Award will each year honor two students "like Bob" who "exhibit strong leadership skills in their roles in the North Shore community."

Congressman Seth Moulton, keynote speaker for the event, appeared on video from the back of a car after touring Marine Corps Base Quantico in Virginia, about an hour south of Washington, D.C.

"I'm sorry I can't be there in person; and look, if I was, I'd be shaking Bob Bradford's hand," Moulton said. "Thank you for all the work you've done on the North Shore."

Moulton, a Salem Democrat and Marblehead native, turned to the work ahead in Washington, including what must take place as the COVID-19 pandemic worsens.

"I had to explain to my parents, who live five minutes from me, that they can't come for Thanksgiving, can't see their granddaughter. So many of us — literally all of us — are having conversations like that with our friends and family," Moulton said. "This is a time we often get to reconnect and take a look at reality, and reality is pretty sobering."

He was critical of Republican leadership in Congress as a second coronavirus relief package has stalled.

"I'm not saying this to be partisan, it's just the fact of how things are going on in Washington right now," Moulton said. "While I thought there was a good chance we'd get some relief legislation up for a vote when we're down in Washington this week, it doesn't seem to be on the table at all."

In the meantime, Moulton said, "What I'm trying to do is find Republicans I can work with on smaller issues to get things done where we can."

"We're no longer thought of as a bedroom community here. We actually provide the jobs so people who live here can work here too," Ambler said. "A lot has changed over the years, and we need to continue to foster it, grasp it. It's the future of the economy."

Bradford echoed those sentiments during a spontaneous interview with Karen Andreas, regional publisher of North of Boston Media Group, which includes the Gloucester Daily News.

"We have to always remind ourselves that this is a very tight region, but also a very independent region," Bradford said. "We need to remind ourselves that, for this region to remain strong, we have to maintain excellent relationships with our local officials and those at the state level."

Bradford said it's been an honor to lead the North Shore Chamber during the past 40 years.

"There's a lot of memories," he said. "All the chairs over the years have been great to work with. They all cared so much about professionalism and doing things the right way, and it has just been a wonderful experience."