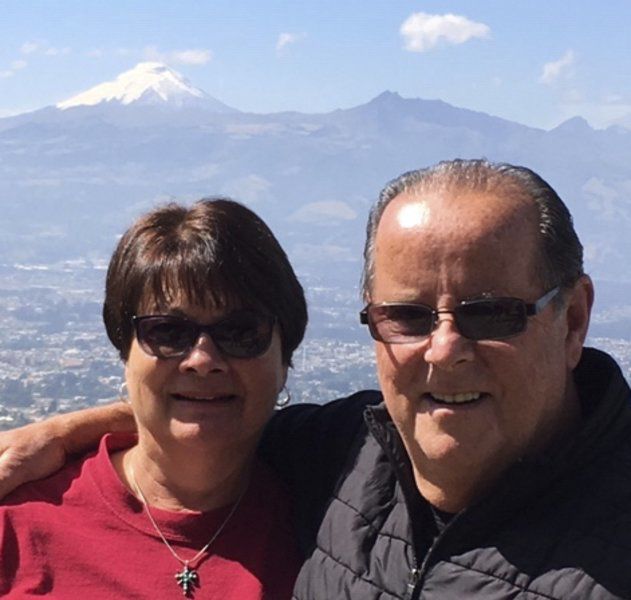 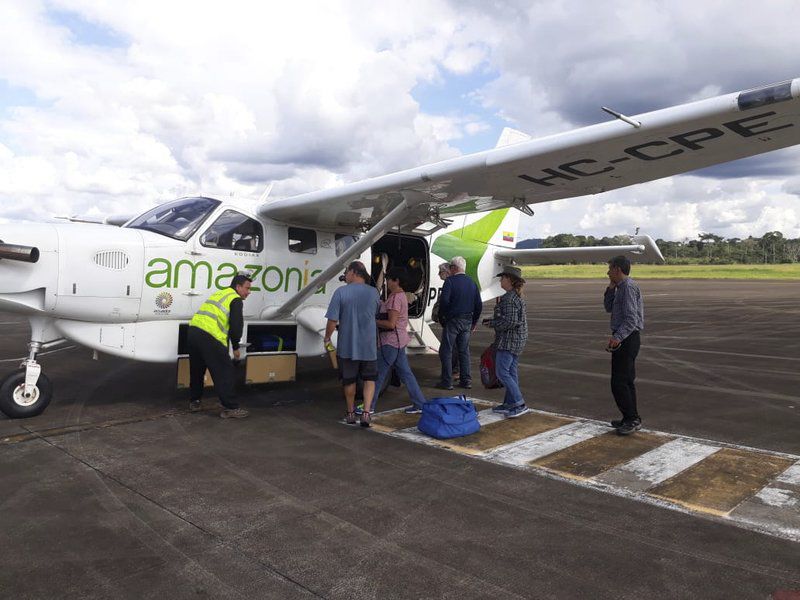 The group, including Rosemary and Kevin Stankiewicz of Peabody, board the private nine-passenger plane in the outskirts of Ecuador to fly to Quito.

The group, including Rosemary and Kevin Stankiewicz of Peabody, board the private nine-passenger plane in the outskirts of Ecuador to fly to Quito.

PEABODY — Rosemary and Kevin Stankiewicz of Peabody maneuvered through the streets of Ecuador on the back of motorcycles Wednesday, Oct. 9, to escape the string of protests erupting throughout the country and make their way home.

Protesters set fire to tires and used them and other debris to block roads and highways leading to the country’s capital of Quito, says Rosemary Stankiewicz.

“They were the only ones to get through the flames,” Stankiewicz said of the locals who offered to drive them through the blockades on their small motorcycles, with their luggage in tow.

Ecuador’s President Lenin Moreno declared a state of emergency Thursday, Oct. 3, sparking a surge of anti-government protests from the country’s indigenous population. This came as a result of the president’s earlier decision to cut fuel subsidies and implement tax and labor reforms, according to the Associated Press.

The day Stankiewicz and her husband arrived in Ecuador, along with three other retirees and their tour guide, she said they were told of the situation and advised to expect protests in the city.

“We’re in the middle of a political uprising,” said Stankiewicz, 64. The next day, she said they traveled around Quito, where she saw the burning tires in the streets. She explained how they then traveled to the Amazon rainforest, taking a canoe to reach their hotel.

Leaving for Ecuador on Oct. 2, the group intended to sightsee, travel to the Galapagos Islands and stand in Ecuador’s Middle of the World before returning home Oct. 14. But with turmoil building and roadblocks increasing, she said their tour guide advised them to be ready to leave their hotel in the Amazon rainforest in an attempt to get back to the capital and fly home. Early the following morning in the pouring rain, she said they crossed the river again and were picked up by a bus.

“We started driving,” said Stankiewicz, noting the lines of traffic and military vehicles in front of them. “We should be safe, we’re behind the military.”

But then everything stopped. She said the military turned around and started to leave, saying they have orders not to confront the protesters.

“Tires were burning like crazy; thick black smoke was everywhere,” she said of the roadways. Her husband, Kevin Stankiewicz, 67, called the situation “a nightmare.”

The six travelers then landed at the Hakuna Matata Amazon Lodge south of the capital in the town of Archidona, where they stayed for the night. As the group bonded together, she said they began brainstorming ways to get through the blockades and make it to the Quito International Airport.

With limited cell phone access, Stankiewicz said she and her husband tried to keep in touch with their three children at home. Her son, Brad Stankiewicz, who lives in Boston, was in contact with the U.S. Department of State. Jason Stankiewicz also kept trying to reach his parents at the time. “It’s like a scene out of a movie,” he said of their experience.

In Ecuador, Stankiewicz contacted the U.S. Embassy, where she said they were advised to stock up on food and water and not move between provinces.

“Nothing seemed to be slowing down,” she recalled of the frantic situation. “We need to get out of here; we kind of took matters into our own hands.”

With help from the hotel manager, Stankiewicz said their only option was to hire a private airplane to fly them the short distance to Quito.

But she said they still needed to get through the roadblocks and fires to the airport that was 10 miles away.

Employees from the hotel and other locals offered to drive them the distance on motorcycles, where Stankiewicz said they cut through back roads and maneuvered through blockades. Flames from the protesters’ burning tires were so hot she said the bottom of their sneakers started to melt.

At one point, she said a group of protesters threatened to put nails in the tires of their motorcycles if they tried to pass. They negotiated with other indigenous groups by offering money, food and water in exchange for passage.

“They’re all screaming at us,” she said, adding how they were chanting and holding makeshift spears. “It was extremely scary.”

They eventually reached the small deserted airport in the Amazon rainforest, where they boarded a nine-passenger private airplane and flew to the Quito International Airport — taking alternate flight routes to avoid the smoke and fires from burning bridges.

“We got home safe,” Stankiewicz said, as the group landed in Miami, Florida on Oct. 10.

The couple is back at their house in Fort Myers, Florida and will return home to Peabody within the week. “Be thankful for where you live,” she added. “Do not ever take for granted your liberties.”

This winter, the Peabody couple planned to visit Poland, but Stankiewicz isn’t sure if she can leave the country again so soon.

“We don’t scare easily,” said Stankiewicz, adding how she and her husband enjoy traveling and experiencing new cultures. “I’ve never been afraid before this trip.”

As of Oct. 9, Ecuador Travel Advisory posted on the U.S. Department of State website lists Ecuador as Level 2: Exercise Increased Caution. Based on her experience, Stankiewicz said it should be updated to a Level 4: Do Not Travel.

“If we hadn’t come up with this plan and had help from the locals there...we’d still be sitting in that hotel,” she said. If they stayed any longer, she said they’d inevitably run out of food, bottled water and medications, as well as face impending gasoline shortages.

Staff writer Alyse Diamantides can be reached at 978-338-2660 or adiamantides@gloucestertimes.com.