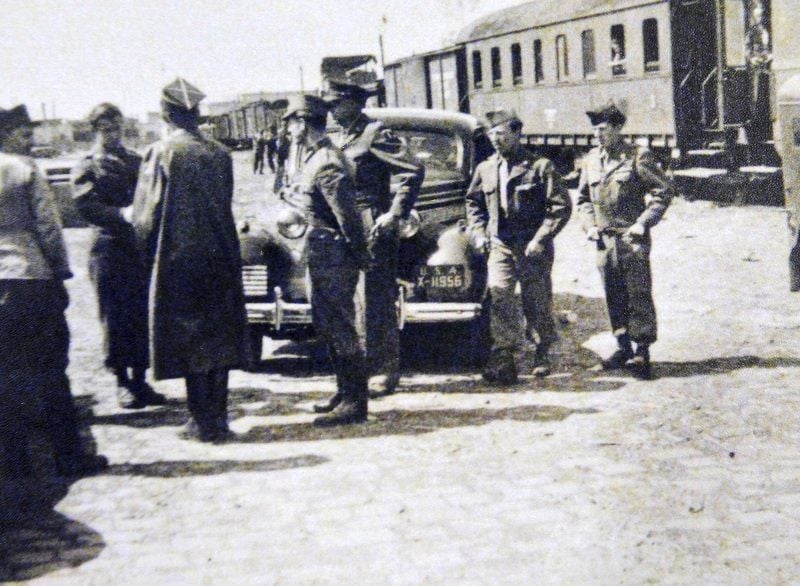 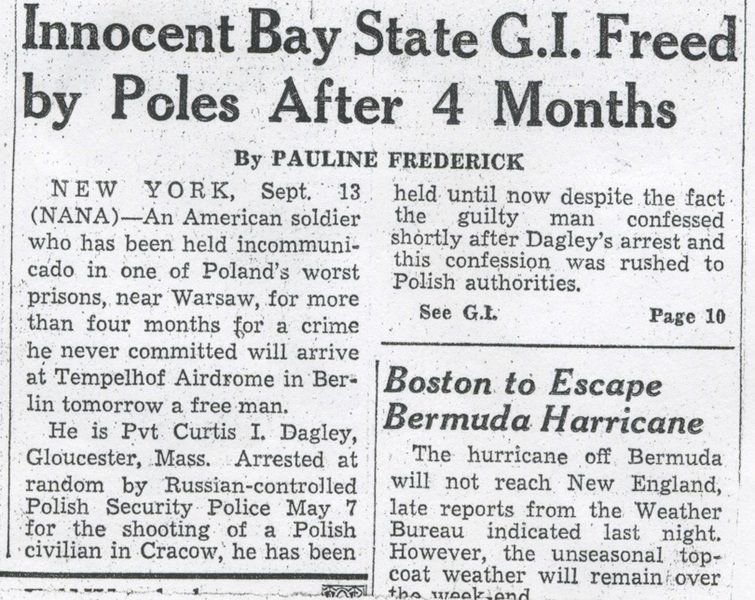 A newspaper clipping saved by the Dagley family reports why Curtis Dagley was imprisoned and details of his release. 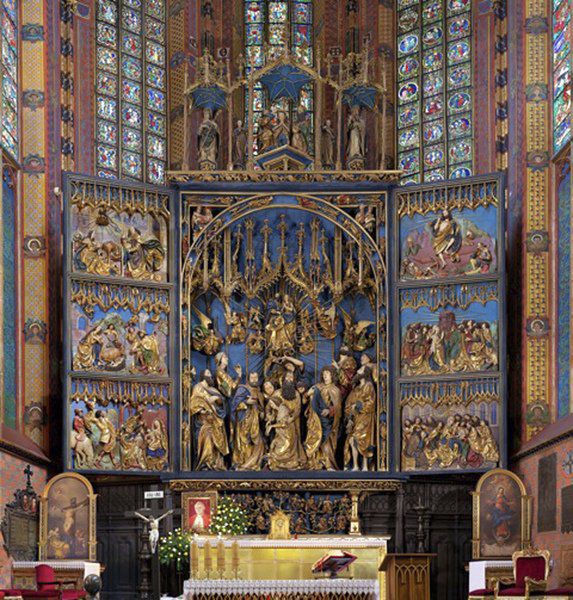 Courtesy photoThe altar in St. Mary’s Basilica Church in Krakow, Poland, was handcarved by Veit Stoss in the 15th century. 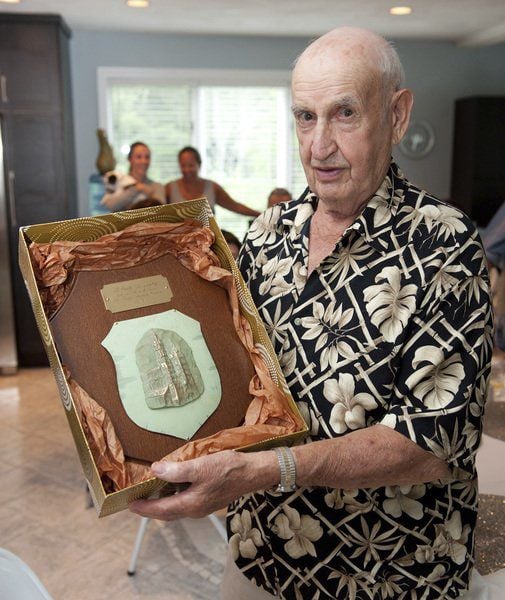 Courtesy photoCurtis Dagley holds up a plaque he received from parishioners of St. Mary's Church in Krakow, Poland, honoring him as a hero. On Thursday, The Ministry of Foreign Affairs of the Republic of Poland will award him the Bene Merito medal at Gloucester City Hall.

A newspaper clipping saved by the Dagley family reports why Curtis Dagley was imprisoned and details of his release.

Courtesy photoThe altar in St. Mary’s Basilica Church in Krakow, Poland, was handcarved by Veit Stoss in the 15th century.

Courtesy photoCurtis Dagley holds up a plaque he received from parishioners of St. Mary's Church in Krakow, Poland, honoring him as a hero. On Thursday, The Ministry of Foreign Affairs of the Republic of Poland will award him the Bene Merito medal at Gloucester City Hall.

One of Poland’s greatest and most sacred works of art might not be there if not for the actions of a Gloucester fisherman and other Americans during World War II.

Curtis Dagley on Thursday will receive the Bene Merito medal from the Ministry of Foreign Affairs of the Republic of Poland for his part in returning to Poland cultural treasures plundered by Nazi Germany. The honor also recognizes the imprisonment he suffered at the hands of the Communist authorities of Poland.

Drafted in 1945, the 18-year-old Dagley was a private when he was assigned a special mission in 1946. He was not told any details of the job.

He found himself one of 12 guards aboard a special train from Nuremberg, Germany, to Krakow, Poland, guarding artworks plundered by the Nazis in 1939, including a 15th century altarpiece hand-carved by Bavarian sculptor Veit Stoss. The works had been recovered by a special commission, known as The Monuments Men, which included Lanesville sculptor Walker Hancock, and were being returned to their owners.

The largest such Gothic piece in the world, the Voss altar measures 43 feet high (about four stories) by 36 feet wide when the two side panels are opened completely at the altar of St. Mary’s Church in Krakow. The revered altarpiece tells the story of the role of Mary in the expiation of the sins of the world by her son Jesus Christ. Some 200 incredibly realistic figures, some 12 feet tall, adorn it. It has been compared in its significance to the Polish nation to the U.S. Liberty Bell.

The return of the treasures coincided with and became a focal point of the Third of May anticommunist demonstrations in Poland in 1946.

Five days after the train’s arrival, Dagley was arrested at random by the Communist-controlled Polish security police, accused of shooting a Polish militiaman during an incident involving a woman. Another officer admitted to the shooting, but to protect artifacts still on the train, U.S. officers decided to say nothing; they told Dagley he’d be in jail a week.

A week turned into four months as a standoff between the Communists and the U.S. military delegation occurred. Dagley, although innocent, remained in the infamous St. Michael’s Prison as the two sides worked out their post-war relations. He was the only American in a cell of 17 Polish businessmen mistrusted by the Communists. He was not allowed to shower, to walk outside or to change his clothing.

The U.S. State Department and Warsaw finally agreed to a prisoner exchange. Dagley was freed and flown to Germany on his 19th birthday. He was hospitalized briefly, then discharged.

“They wanted to keep me in the Army and give me corporal stripes, but I said no,” he told Cape Ann Magazine in 2012. “I wanted to get home and forget it all.”

Soon, he was back at his old job cutting fish for Gorton Pew. He married at 21, had four children and went to sea for 42 years as a fisherman and successful captain.

His family didn’t know about his actions or the altar on the train until Dr. Agata Wolska, an art historian and St. Mary’s archivist, came to Gloucester in the summer of 2012 to thank him. She had spent more than a year tracking Dagley. She brought with her a scrapbook with a picture of his arrest and a plaque with copper taken from the church’s roof from the church’s parishioners.

Now, on Thursday, Dagley will receive the Bene Merito medal from the the Ministry of Foreign Affairs of the Republic of Poland.

“Through his generous and brave action, Pvt. Dagley insured the safety of the remaining members of his mission and averted a potentially dangerous political incident from occurring between the Government of the United States of America and that of the Peoples Republic of Poland,” according to a press release from the Honorary Consul of the Republic of Poland.

The Bene Merito distinction is conferred upon citizens of the Republic of Poland and foreign nationals in recognition of their merit in promoting Poland abroad. Bene Merito is awarded by the Minister of Foreign Affairs at the Minister’s own initiative or at the request of heads of other Polish Ministries or heads of foreign missions.

Material from the Times’ sister publication, Cape Ann Magazine, by David Rhinelander was used in this report. Andrea Holbrook may be contacted at 978-675-2713, or aholbrook@gloucestertimes.com.

What and who: The Ministry of Foreign Affairs of the Republic of Poland will present Curtis Dagley with a Bene Merito medal.

A Gloucester fisherman was honored by the Ministry of Foreign Affairs of the Republic of Poland on Thursday for actions he took during World War II.