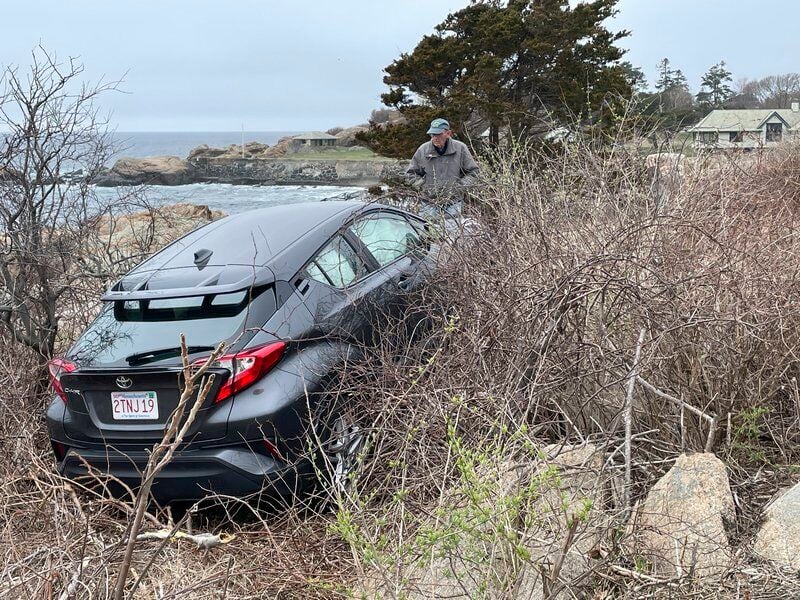 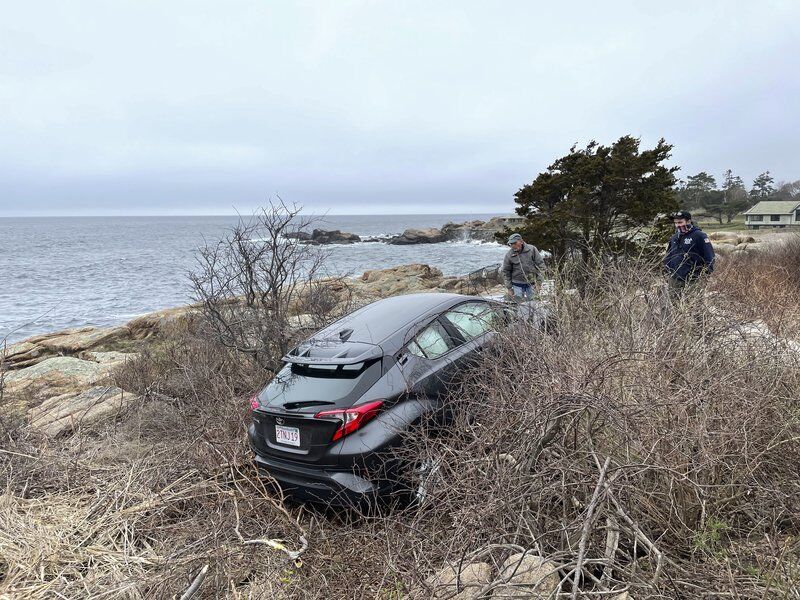 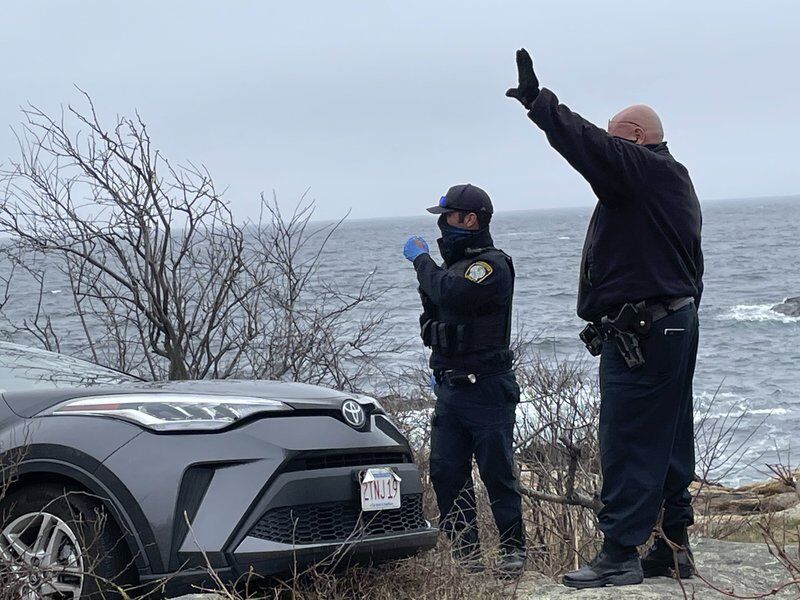 Jonathan Golding/Courtesy photo/Police work at scene on Atlantic Road, where a driver ended up on the rocks Sunday.

Jonathan Golding/Courtesy photo/Police work at scene on Atlantic Road, where a driver ended up on the rocks Sunday.

A man was transported to Addison Gilbert Hospital after driving off Atlantic Road onto the rocky shoreline Sunday.

Gloucester firefighters and police were dispatched to the intersection of Atlantic Road and Lands End Lane around 10:24 a.m. Sunday for a report of a vehicle with airbag deployment off the roadway.

They found a gray Toyota off the roadway. One of the witnesses, an off-duty Rockport firefighter, told police he was driving on Atlantic Road when the other car cut in front of him from the opposite side of the street and went off the roadway. He told police that the vehicle went directly off the road without slowing down and did not make any attempts to avoid the crash.

The off-duty firefighter said he went up to the vehicle and attempted to check on the driver, who  was unresponsive at that time. He then called 9-1-1 and stayed with the vehicle. After a few minutes passed by, the driver became responsive but stayed in his vehicle.

Gloucester firefighters were able to remove the driver, who appeared shaken up but was conscious and alert, from the vehicle and he was escorted into the ambulance for transport to Addison Gilbert. He would not respond to any questions by first responders but an officer was able to locate the man's wallet. While at the hospital, a firefighter reportedly asked the man if he drove off the road on purpose and he indicated yes by shaking his head up and down.

About 1 p.m., an officer attempted to follow up at the hospital. Hospital staff informed police that the driver was uncooperative during treatment.

Based on the information collected, police filed a criminal complaint to the court charging the driver with negligent operation of a motor vehicle, marked lanes violation, and driving a speed greater than reasonable and proper.

In other news taken from the logs of Cape Ann's police and fire departments:

5:52 p.m.: Multiple 911 calls about a woman causing a disturbance at the intersection of Mansfield and Washington streets. The woman was transported to Addison Gilbert Hospital via ambulance.

4:43 p.m.: Man said to be cutting lines of lobsters boats moored behind the Gloucester House restaurant off Rogers Street and setting them afloat. The dispatcher told the responding officer that a disturbance ensued between the subject and a boat owner, which ended when the suspicious man went in the water. The man pulled himself out, but continued to cause an issue.

Single hypodermic needles were retrieved from Eastern Point Road at 10:11 a.m., Burnham Street at 11:18 a.m., and on the rocks by the cannons at Stage Fort Park off Hough Avenue. The three were disposed of safely.

11:32 a.m.: A woman came to the station to report that her foot went through the new red textured area on one of the Main Street sidewalk handicap ramps. Message left with Public Works on-call supervisor and a cone was placed over the area.

8:17 a.m.: A 48-year-old man in the area of Intershell at 9 Blackburn Drive said he did not feel well after  cutting through the swamp and possibly swallowing some water.

4:43 a.m.: Disturbance at an apartment at the Heights of Cape Ann. Several residents informed arriving officers that there was a woman yelling and singing on the balcony on the third floor. The woman opened the door to police and said she was not on the porch but had her ear pods on and was singing with the music. P aramedics arrived and she refused medical treatment. She stated that she was fine and will keep the noise level down.

11:39 p.m.: A woman reported a larceny from a home on East Main Street that she has rented out via rental agency. Recently, a tenant who was going to be leaving by the end of April notified the owner that she would be leaving immediately. She paid partial rent for the month although the owner wanted the full amount. The owner also discovered a jewelry box containing diamond and miscellaneous jewels was missing from the bedroom. The owner's brother also stated that some pills were missing from his pill container. The caller suspects the tenant took the pills and jewelry because she had full access to the home and left abruptly.

5:56 p.m.: A hypodermic needle retrieved from the curb near leaves in front of 94 Western Ave. was disposed of safely

4:42 p.m.: Riverside Avenue residents reported their daughter missing. , saying she was wearing pajamas and was seen approximately 30 minutes ago in the backyard. She was located shortly afterward in their basement.

2:30 p.m.: A man came into the station to report that he had been pushed twice by his boss while at the State Fish Pier on Parker Street after a verbal altercation that escalated over money. He said he been doing work on his boss' boats, Reliance and the Anita Natalie, and that his boss made several threats toward him. He told police he did not want to pursue the matter but wanted his complaint on record.

2 p.m.: Patrick Wilson, 41, homeless of Gloucester was arrested on charges of driving with a suspended license and drug posession. Officers observed Wilson, who they knew to have a suspended Massachusetts driver's license, driving onto Webster Street and activated their blue lights when he pulled into a parking spot at the Gloucester Fraternity Club. When arrested on the suspended license charge, police say Wilson admitted to having a small amount of crack cocaine in his back left pocket. Officers also found a crack pipe and a small paper fold with crack cocaine residue inside Wilson's car. They also found the prescription antiseizure medication gabapentin and a piece of paper with names and amounts listed on it, which police believet be a list of customers who owe money for drugs, known on the street as a cuff list.

10 a.m.: Officers were dispatched to the area of Main and Rogers streets for a man creating a disturbance. An officer spotted man in the Gloucester House parking lot on Rogers Street. The man said his identity had been stolen and began to make conversation with the officers that did not make logical sense. The Gloucester Fire Department paramedics transported him to Addison Gilbert Hospital.

8:22 p.m.: The harbormaster was notified to assist a boat that ran aground near Thacher Island.

4:25 a.m.: A King Street resident reported his car had been side-swiped overnight. An accident report was filed.

7:29 p.m.: A driver on High Street received a citation for unlicensed operation. The car was towed.

5:10 p.m.: Medical emergency on Railroad Avenue. The person was transported by ambulance to Addison Gilbert Hospital.

12:15 p.m.: A Dean Road resident reported finding pieces of air-soft guns on his property. Officers disposed of the pieces.

6:13 p.m.: Report of a scam attempt on Evans Way. No personal information was given to the scammer.

12:55 p.m.: Report of a head-on collision between a landscaping dump truck and a box truck. The driver of the box truck was airlifted to Mass General while the dump truck driver was transported by ambulance to Addison Gilbert hospital. Both vehicles were totaled. The matter is remains under investigation by the Rockport Police Department and State Police. At presstime, no citations have been issued to either driver.

6:40 a.m.: An illegally parked car on High Street was tagged.

11:43 a.m.: Old prescriptions were deposited in the drop-box outside the station.

3:33 p.m.: Officers gave a group of children a tour of the station.

Traffic stops: Between 10 a.m. and 1:30 p.m., officers gave 12 drivers on School, Brook, Summer, Beach, Vine Pleasant and Union streets warnings — 10 written and two verbal — for hands-free driving violations. The traffic enforcement effort was part of a public safety grant issued to the department. The grant program is in the "distracted driving" phase through April 2 to 18. Officers will be on the lookout for those using their cell phones while driving.