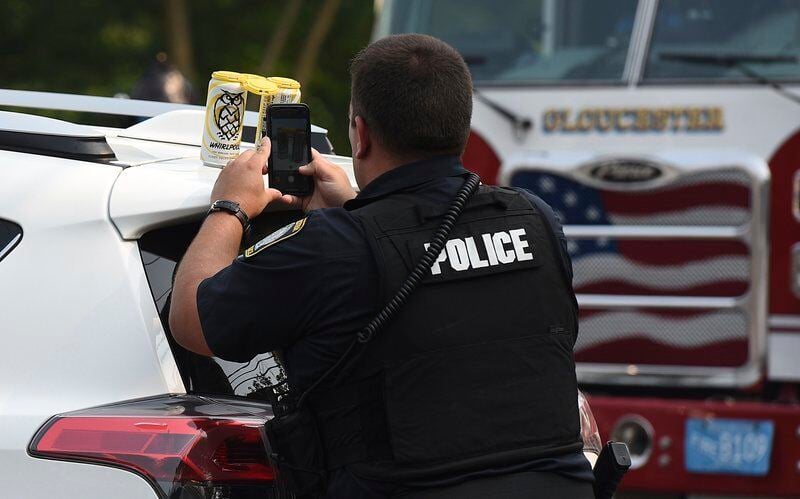 PAUL BILODEAU/Staff photo. A police officer takes a photographs of some cans of Night Shift Brewing's Whirlpool beer that he removed from a SUV that flipped on its side at the intersection of Thompson and Concord streets in Gloucester on Tuesday afternoon. 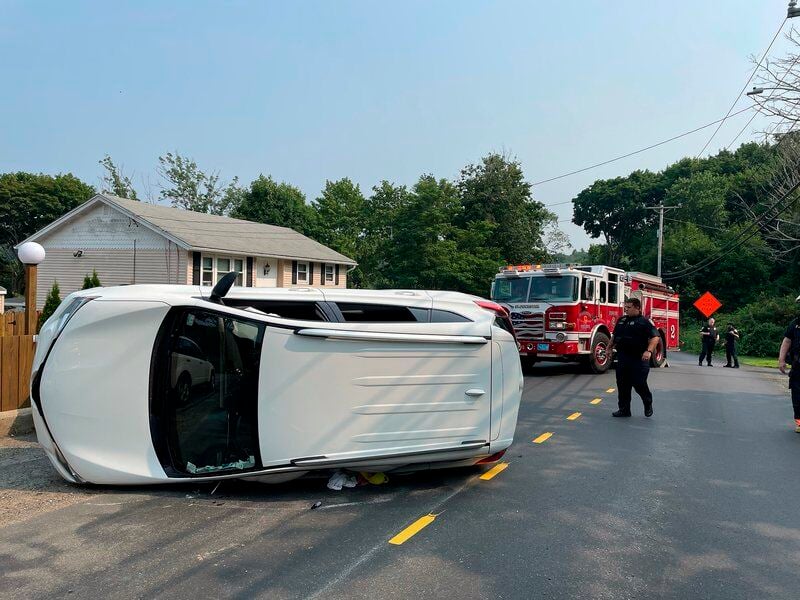 PAUL BILODEAU/Staff photo/This crash near the intersection of Concord and Thompson streets tied up Wingaersheek Beach traffic for a long period of time Tuesday afternoon until the vehicle could be towed. A Westford woman, who police say was the driver, faces a drunken driving charge.

PAUL BILODEAU/Staff photo. A police officer takes a photographs of some cans of Night Shift Brewing's Whirlpool beer that he removed from a SUV that flipped on its side at the intersection of Thompson and Concord streets in Gloucester on Tuesday afternoon.

PAUL BILODEAU/Staff photo/This crash near the intersection of Concord and Thompson streets tied up Wingaersheek Beach traffic for a long period of time Tuesday afternoon until the vehicle could be towed. A Westford woman, who police say was the driver, faces a drunken driving charge.

Gloucester police arrested a Westford woman on charges of operating under the influence of alcohol and other charges following a rollover crash Tuesday afternoon at Concord and Thompson streets.

Rachel Ann Healy, 39, of Bay Drive in Westford, also was charged with marked lane violations, speeding and negligent operation of a motor vehicle.

The crash, which occurred around 3:30 p.m., tied up Wingaersheek Beach traffic for a long period of time until the vehicle could be righted and towed.

According to the police report, Healy confirmed to responding officers that she was the driver of the rolled-over vehicle and she had been trying to "get to the ocean."

"There appeared to be a gray 2017 Kia Sportage that had also been struck which was parked and unoccupied on the side of the road," Officer Alexander Aiello stated in his report. "The parked vehicle had moderate damage to the front driver's side and appeared to have been pushed into the fence at 77 Concord St. and caused minor damage to the fence."

Aiello wrote in his report that Healy's speech was slurred and her eyes red and glassy. Aiello also stated Healy had trouble keeping her balance.

Police said they found a cooler of beer in Healy's SUV after it was righted by a Tally’s Towing crew.

Healy failed all four field sobriety tests administered, police said She was arrested and transported to the police station for booking.

'In other news taken from the logs of Cape Ann's police and fire departments:

11:49 p.m.: After receiving multiple calls from across the Annisquam River reporting a disturbance at Wingaersheek Beach, police responded and reported a search of the area was unsuccessful.

9:11 a.m.: Police said they will cite a 59-year-old Gloucester man for operating a moped after the suspension of his driver's license after a crash on Cherry Street.

The operator, who was transported to Beverly Hospital with non-life threatening injuries, told police he was traveling south on Cherry Street when he struck the curb and sidewalk and was thrown from the moped. The moped crashed into nearby shrubs.

2:26 a.m.: Medical emergency on Rowe Point. The person was transported by ambulance to Addison Gilbert Hospital in Gloucester.

12:25 a.m.: Officers dismissed a group of students partying by the southern woods on Jerden's Lane.

9:11 p.m.: A driver on South Street received a verbal warning for a marked lanes violation.

8:32 p.m.: A Mt. Pleasant Street resident reported his or her condo had been falsely put up for sale on Craigslist. Officers advised the person to contact Craigslist and report the false ad.

5:35 p.m.: Report of a broken car window on Forest Street. Officers found a rock inside the car and small point of impact on the window. No foul play is suspected at this time.

1:55 p.m.: Report of a truck backing into a car on Breakwater Avenue. No injuries were reported and the car sustained minor damage. Information was exchanged between the two drivers.

Bad bacteria: Officers dismissed a group of swimmers from Old Garden and Front beaches at 12:15 and 12:39 p.m., respectively. The Board of Health has temporarily banned swimming at the two beaches due to high levels of bacteria.

11:27 a.m.: Report of an irate customer arguing with employees at Lattof Farm Kitchen on Main Street. The customer reportedly grabbed some products, threw a handful of cash at the employees and drove off. The cash was enough to cover what the customer took. Employees gave police the customer's license plate number and requested a no-trespassing order against the individual. Officers were unable to make contact with the customer.

12:55 p.m.: Report of a car with a blown-out tire on Route 128 northbound. Officers checked the area and were unable to locate the car in question.

6:48 a.m.: A driver on Southern Avenue received a citation for speeding.

10:20 p.m.: A driver on Eastern Avenue received a verbal warning for speeding.

9:22 p.m.: Report of a carbon monoxide alarm at a John Wise Avenue home. Firefighters detected carbon monoxide coming from a stove that was accidentally left on. The home was ventilated and firefighters cleared a short while later.

Medical emergencies: The rescue squad responded at Willow Court at 12:15 p.m. and on Gregory Island Road at 12:39 p.m. Both were transported by ambulance to a hospital.