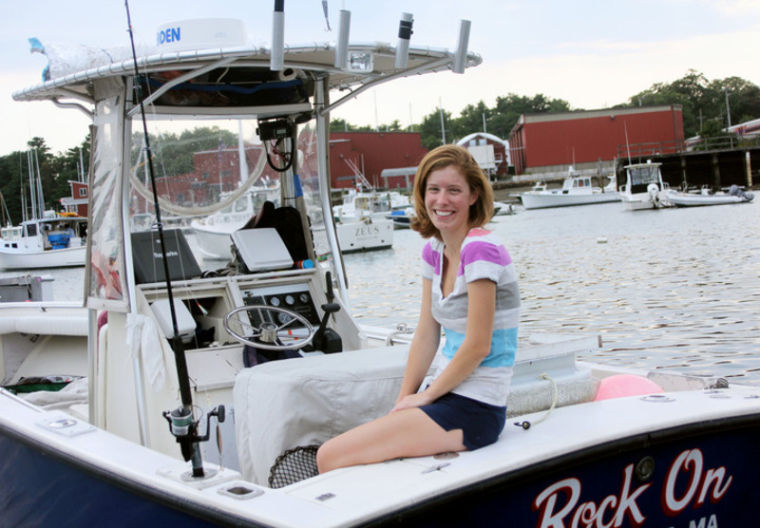 Heidi Burgess of Manchester and Boston on Rock On, her family's tuna fishing skiff. 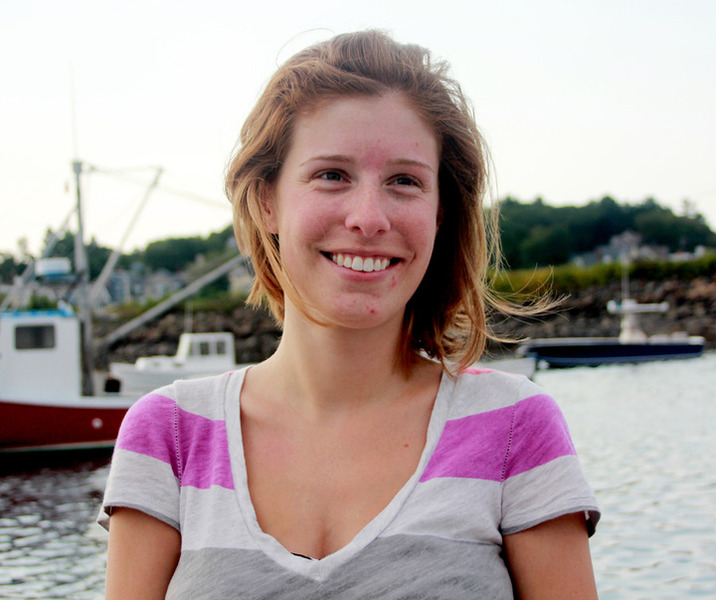 ALLEGRA BOVERMAN/Gloucester Daily Times Heidi Burgess of Manchester and Boston. Her family's tuna fishing skiff, Rock On, is in the background at right, behind her. 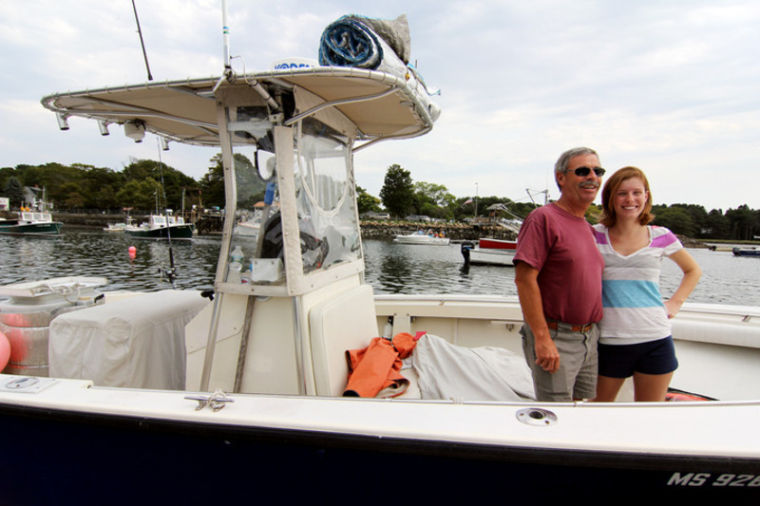 Heidi Burgess and her father Richard Burgess of Manchester, on their tuna fishing skiff Rock On. 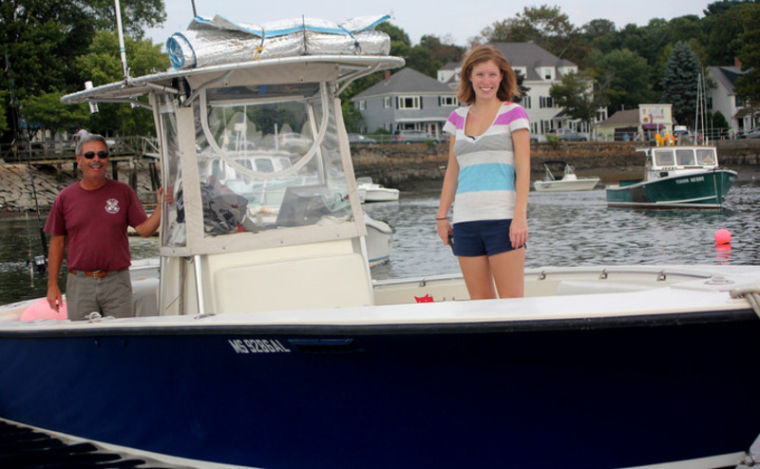 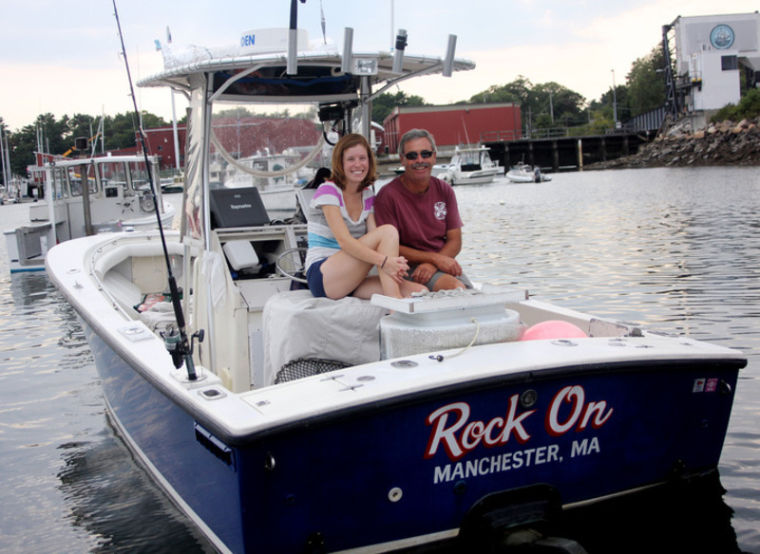 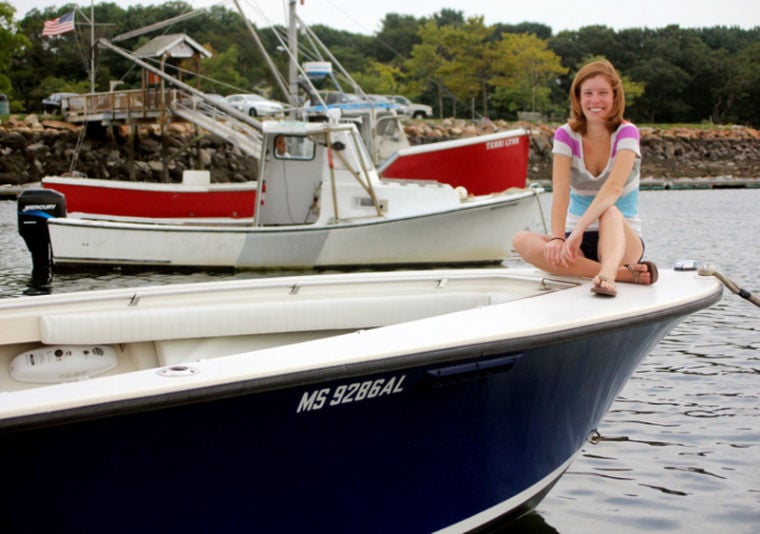 Heidi Burgess of Manchester and Boston on Rock On, her family's tuna fishing skiff.

ALLEGRA BOVERMAN/Gloucester Daily Times Heidi Burgess of Manchester and Boston. Her family's tuna fishing skiff, Rock On, is in the background at right, behind her.

Heidi Burgess and her father Richard Burgess of Manchester, on their tuna fishing skiff Rock On.

Linked to but overshadowed in the hoopla of the first Bluefin Blowout tuna tournament anchored last week at the Cape Ann Marina, the fifth annual “Tag a Tiny Tuna” effort raised an estimated $5,000 and $10,000 for the Large Pelagics Research Center.

The research center is enjoying its first season on the former pier of the former Cape Ann Granite Co. at Hodgins Cove of Ipswich Bay in Bay View.

While 30 boats competed for high stakes in the more traditional tournament which produced two trophies and more than $13,000 in prize money — the keepers and winners combined weighed nearly 1,000 pounds of the most valued sushi flesh — another 19 boats committed to catch, tag and release 19 more tuna that are still swimming, albeit now carrying a tag.

“The whole point was to raise money for Dr. Molly,” said Heidi Burgess, 25, who grew up in Manchester, the daughter of a fisherman, and now works in marketing and promotions in Boston.

The facility is a part of the University of Massachusetts-Amherst academic system.

She and Mark Godfried, one of Gloucester’s most experienced and respected fishermen, organized the first Tag a Tiny Tuna tournament five years ago. Her father, Richard Burgess, is a tuna fisherman and owner of a small, multiple boat gillnet fishing business in Gloucester.

Heidi Burgess said they charge boats $200 to participate in the tagging program.

“We give out art related to tuna instead of cash prizes,” she said.

Since the program began, she said, “off the top of my head,” the program has generated about $30,000 for the research center. Cape Ann Seafood Exchange in Harbor Loop has also backed the project, with a $500 donation to the Zeus Packaging.

”We ask fishermen to do a measurement and put a tag in, so that we get some data on age and growth rates, and it also gives us a good idea where the size classes are.”

Tags can be obtained at the research center and at the National Marine Fisheries Service offices in Blackburn Industrial Park.

By federal regulation, each recreational angler can keep one bluefin of 27 inches or more for each trip. The smaller fish are small only in relative terms; the larger ones are called giant bluefin for a reason.

Along with the marlin, these are among the alpha finfish; quasi-warm blooded, unlike other fishes, bluefin roam across the ocean as recent tagging field research has demonstrated, showing enormous stamina. The stocks in the Eastern Atlantic and Mediterranean and Western Atlantic have been found to interact.

Fish smaller than 73 inches are not small by most sporting criteria. Larger school tuna, in the four-year-old class, weigh 85 pounds at a length of about 50 inches and give the casting fisherman more or a tussle than any striper. These are the fish Burgess, Godfried, and the Tag a Tiny Tuna program fishermen sought and caught last week.

Nineteen were tagged and released by the 19 boats.

There were also some three- to four-year-old fish, about 35-40 inches in length.

There were especially interesting to the research center because fish of that age class have been hard to find —there was a gap in the data — as ICCAT, the International Convention for the Conservation of Tuna, the governing body for tuna, continues to study this fantastic animal which remains something of an enigma due to its vast range and stamina and unique physiology.

“They double in size for the first four years and then slow down and get fatter,” said Lutcavage.

The school tuna, also known as “football” tuna for their streamlined profile and ability to speed like a torpedo through the water, should be a presence in Cape Ann waters through September.