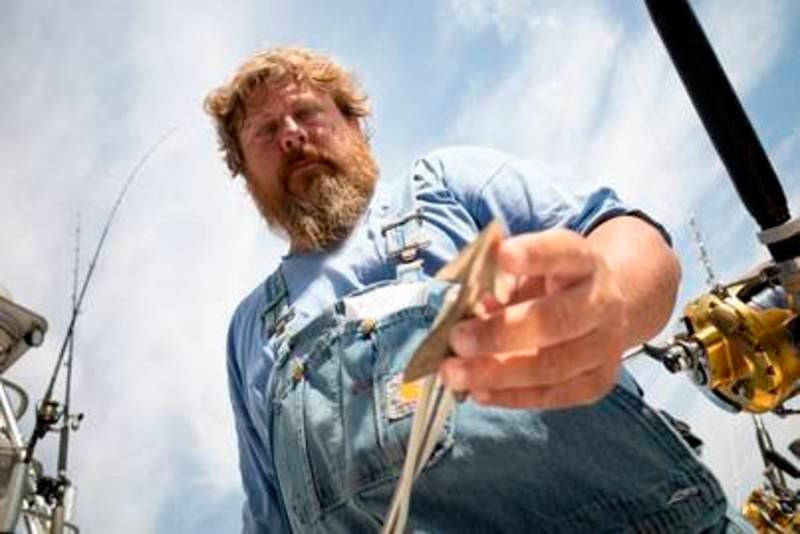 Discovery Channel/Courtesy photo/Capt. Johnny Johnson of Gloucester, who once worked for the Grateful Dead, has assembled a tight-knit crew in his hunt for a record tunaon camera in the Discovery Channel's "All on the Line." The show premieres Friday. 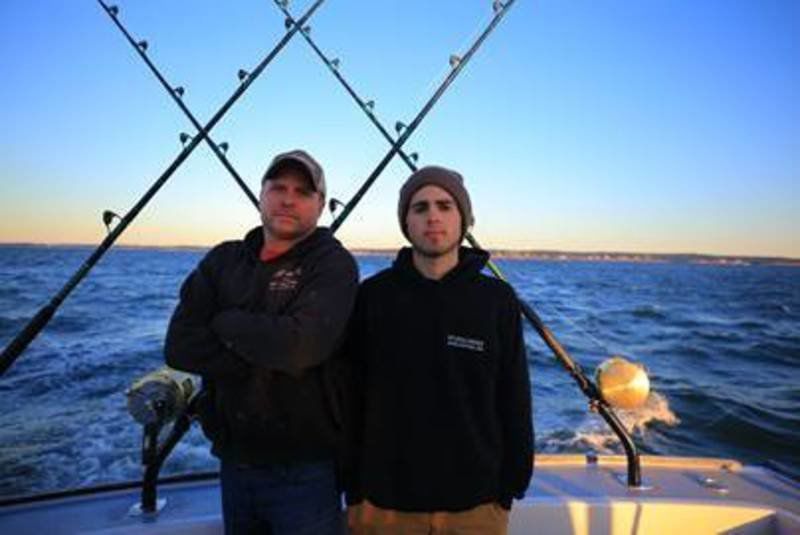 Discovery Channel/Courtesy photo/The fishing vessel Julia Nicole is a multigenerational family business — grandfather, father and son. Danny Smith Jr., left, shown with his father, Danny Smith, will be featured in the Discovery Channel's "All on the Line," which premieres Friday.

Discovery Channel/Courtesy photo/Capt. Johnny Johnson of Gloucester, who once worked for the Grateful Dead, has assembled a tight-knit crew in his hunt for a record tunaon camera in the Discovery Channel's "All on the Line." The show premieres Friday.

Discovery Channel/Courtesy photo/The fishing vessel Julia Nicole is a multigenerational family business — grandfather, father and son. Danny Smith Jr., left, shown with his father, Danny Smith, will be featured in the Discovery Channel's "All on the Line," which premieres Friday.

Two local fishermen’s pursuit for big fish in the North Atlantic will ride the waves to a national television network on Friday.

The new Discovery Channel series "All On The Line" will showcase the dynamics between Gloucester resident Johnny Johnson and North Reading resident Dan Smith Jr., highlighting their unique ability to band together in an industry that otherwise demands fierce, sometimes cutthroat competition.

“I am for every fisherman,” said Johnson, who owns Gloucester Charter Connection. “I am for any fisherman that is out there trying to make a living out on the water. It is a really tough job and everybody that has ever done it knows it is some of the hardest work and some of the most dangerous work in the world.”

At the young age of 8, Smith Jr. knew he wanted to be the best fisherman on the East Coast. Eleven years later, he is now at the helm of the 42-foot Julia Nicole as part of a multigenerational family business and still seeking that title. He getting guidance from Johnson, who is riding his 40-foot Subdivider, in pursuit of catching the biggest bluefin tuna of the sea.

"We have always kind of worked together," Smith Jr. said. "Especially in this fishery, there is not many people you know you can trust. Every fisherman lies, especially when there is money involved. It is always kind of nice that with Johnny we can tell him whatever and he'll tell us whatever."

The young fisherman added Johnson has taught him how to run a successful charter fishing business.

Although he has traveled all over the world in pursuit of big fish, when Johnson came to America’s oldest seaport ten years ago he knew he was home.

“I have never been in a community that made me feel at home,” Johnson said. “I knew that when I got to Gloucester, I was in the right place. I just knew that is where I wanted to grow old and die.”

What made the seaside community so special for the fisherman was not only the fish, but the people.

Ironically, Johnson's Gloucester Charter Connection has represented boats made famous on Gloucester's other reality TV show about fishing for bluefin, National Geographic's "Wicked Tuna," and sold merchandise for the show.

As Johnson and Smith Jr. navigate the choppy waters off the coast of Gloucester, "All On The Line" will highlight their approach to working in an industry that has ever tightening restrictions.

The North Atlantic bluefin tuna, which Johnson and Smith Jr. are both after, is considered one of the most valuable fish in the world.

According to the Discovery Channel, limited supply globally has created prices that can reach as high as $20,000 for a single catch. This also means a tight quota to avoid overfishing and encourage sustainability, something that can be reached at any moment and send fishermen home empty handed.

As each fisherman works to reel in the biggest tuna as fast as possible, regulations restrict them to only one catch per day which must be reeled in by hand.

Smith Jr. says this regulation has the potential to add hours to an already backbreaking process.

"That can limit your profit margin, if you are going out 50 miles and burning $500 in fuel and you can only catch one fish, whereas we would used stay out there until we caught three," " Smith Jr. said. "It really limits the amount of money that you can make."

As both men navigate the fishing industry and the relationships that come along with it, these fishermen will work together to see what is left to discover below the ocean's surface.

"People will give you their opinions, but I think it is the coolest fish in the ocean," Smith Jr. said about the bluefin tuna. "It is absolutely insane to be able to go out there and catch sea monsters."

Where: Viewers can watch the premiere on the Discovery Channel or by downloading the Discovery GO app. Fans can join the conversation on social media with the hashtag #AllOnTheLine.