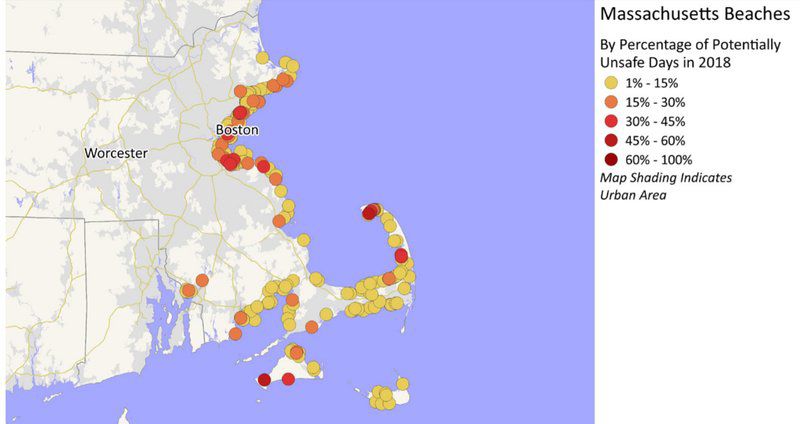 Courtesy: Environment Massachusetts Research and Policy CenterA map of Massachusetts beaches, included in a Tuesday report, that tested positive in at least one 2018 sample for potentially hazardous levels of fecal bacteria in the water. 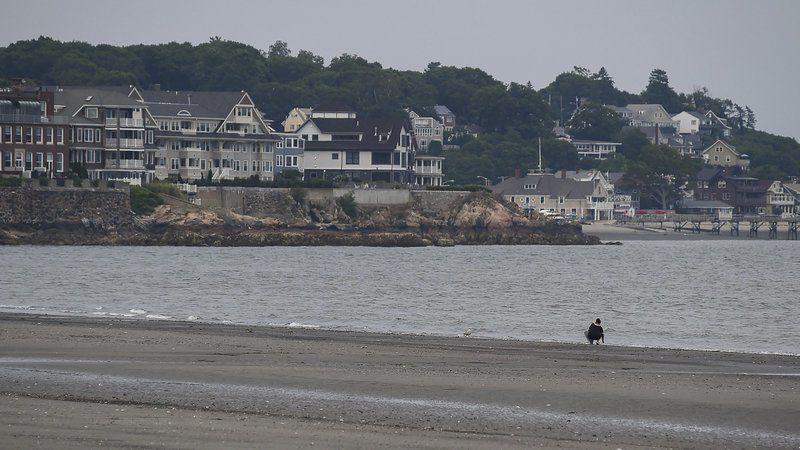 Water quality problems at 200 Massachusetts beaches – including one in Swampscott on Nahant Bay – have been cited in a new report called “Safe For Swimming? Water Quality at Our Beaches.”JAIME CAMPOS/Staff photo 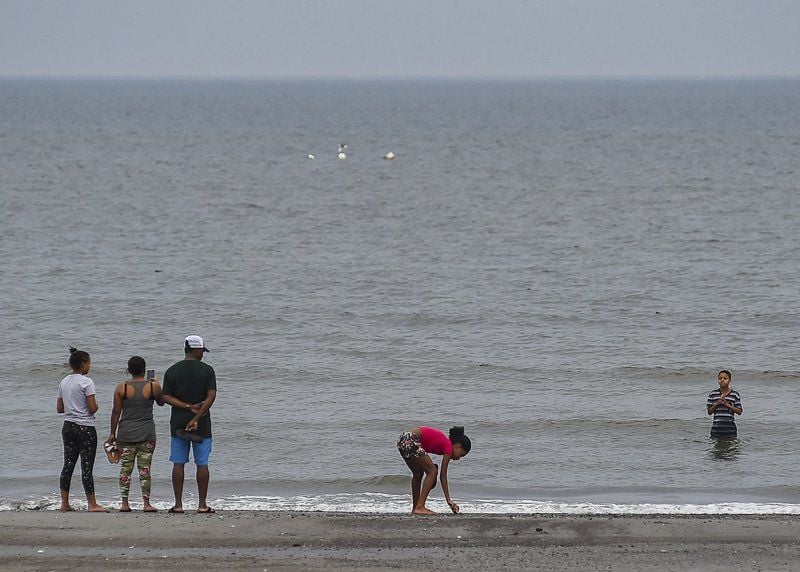 Courtesy: Environment Massachusetts Research and Policy CenterA map of Massachusetts beaches, included in a Tuesday report, that tested positive in at least one 2018 sample for potentially hazardous levels of fecal bacteria in the water.

Water quality problems at 200 Massachusetts beaches – including one in Swampscott on Nahant Bay – have been cited in a new report called “Safe For Swimming? Water Quality at Our Beaches.”JAIME CAMPOS/Staff photo

At the top of the list of Massachusetts beaches with more than 10 days of high bacteria samples last year, Swampscott’s waterfront along Eastern Avenue leads the state with 39 “potentially unsafe days,” according to a new report from the Environment Massachusetts Research and Policy Center and the Frontier Group.

Many of the locations had concentrations of fecal bacteria above federally recommended limits on at least one day, and some demonstrated potentially unsafe water on as many as half of the days they were tested.

While quality has improved in many of the state’s waterways, particularly around Boston, advocates said it is crucial to address the causes of still-frequent pollution to minimize the risk of illness.

“Swimming at the beach is a favorite summertime experience for so many families, but clearly we have more work to do to make sure the water at all of our beaches is safe,” Environment Massachusetts State Director Ben Hellerstein said in a statement. “We must invest in water infrastructure that prevents pollution to ensure that Massachusetts’ beaches are safe for swimming.”

The report analyzed bacteria samples from beaches and lakes in 29 states and Puerto Rico, looking for cases where concentrations of fecal bacteria were higher than the federal Environmental Protection Agency’s highest warning level, which is associated with an illness rate of about 32 per 1,000 swimmers.

More than half of the sites tested nationwide had at least one day with concentrations above the threshold, creating risks for gastrointestinal illness, advocates said.

In Massachusetts, experts examined samples from 583 beachfront locations, ranging from the North Shore to Cape Cod and the Islands. Of those, 223 had levels of fecal bacteria above the federal recommendation in at least one sample.

“We’re not providing enough state funding to cities and towns to do the necessary reduction of everything from sewer overflows to reducing bacteria in our lakes and ponds,” Eldridge said.

In Norfolk County, the average beach was potentially unsafe for swimming on 21% of the days that sampling took place, according to the report, the highest percentage of any county in the state.

The federal government filed a civil lawsuit against Quincy in March, alleging that the city violated the Clean Water Act by dumping pollutants such as E. coli onto beaches between 2009 and 2018. Fact-finding in that case continues and is scheduled to be completed this fall.

Contamination in ocean and lake water can come from a range of sources, often involving rain picking up fecal matter on land and carrying it. Sewage systems, particularly those that combine stormwater and wastewater sewers, are especially vulnerable to overflowing. About 850 billion gallons of untreated wastewater is released from such overflows every year in the U.S., the EPA estimated in 2004.

Investing in sewer and stormwater infrastructure is seen as a way to mitigate or prevent such incidents. A special commission convened to study the issue identified about $1 billion per year in unmet needs providing clean water to towns and another $1 billion needed annually to properly handle wastewater.

Following the commission’s recommendations, the Legislature in 2014 approved a bill increasing the maximum contract assistance the Massachusetts Clean Water Trust Fund, a division of the treasurer’s office, can receive from the state for debt service obligations by $50 million. The law also allows the trust to provide additional loan subsidization and made it easier for municipalities to join the Massachusetts Water Resources Authority, which runs a treatment plant in Winthrop that was critical to cleaning up Boston Harbor.

A representative from the Clean Water Trust Fund could not be reached for comment Tuesday.

Several of the commission’s suggestions, such as increasing the price of delivering clean water and expanding the bottle bill, were not taken up. Eldridge, who co-chaired the commission, said the Legislature’s response was “very modest.”

Unlike 14 other states, Massachusetts still does not require public notification about combined sewer overflows, which the report said can both carry disease-causing bacteria and create toxic algae blooms. Lawmakers who last week kayaked the length of the Merrimack River called attention to that specific problem.

A bill (H 3976) implementing the overflow notification mandate cleared the Joint Committee on Environment, Natural Resources and Agriculture last month and is now before the House Ways and Means Committee.

“Climate change is only exacerbating our pollution issues as stormwater runoff triggers more sewage overflows,” Gabby Queenan, policy director at the Massachusetts Rivers Alliance, said in a press release alongside Tuesday’s report. “This legislation is the first important step in addressing and eventually eliminating CSOs. Ultimately we need to make major investments in our grey and green water infrastructure.”

Eldridge also has a bill (S 460) before the Legislature that would impose a $0.70-per-1,000-gallons surcharge on water withdrawn from municipal sources. Half of that money would go back to the cities and towns to help improve their water infrastructure and the other half would go to the state.

He said he believes that legislation, which has not yet been scheduled for a hearing before the Environment Committee, would “take steps to reduce this release of sewage and stormwater.”

“As difficult as it has been to discuss raising revenue for education or transportation, it seems to be even harder for water infrastructure because people often aren’t thinking as much about infrastructure that’s below the ground as opposed to seeing our commuter rail or subways break down or a lack of funding in our schools,” he said.

REPORT: Water Quality at Our Beaches

MANCHESTER — White Beach will remain closed to swimming for the foreseeable future after failing its second weekly bacteria and fungal water test.