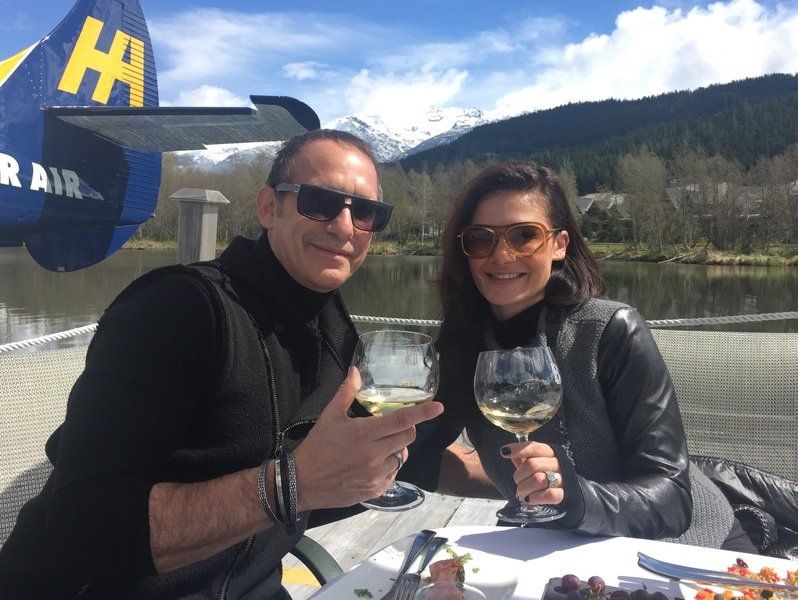 Courtesy photoMaria Lekkakos and her husband Marc Harris enjoy an elegant lakefront picnic during their stay in Whistler, British Columbia, as part of their appearance on Bravo’s docuseries “Apres Ski.” Lekkakos owns the high-end salon M. Lekkakos in Wenham, and Harris owns Salon Marc Harris in Boston and New York. The couple live in Boston. 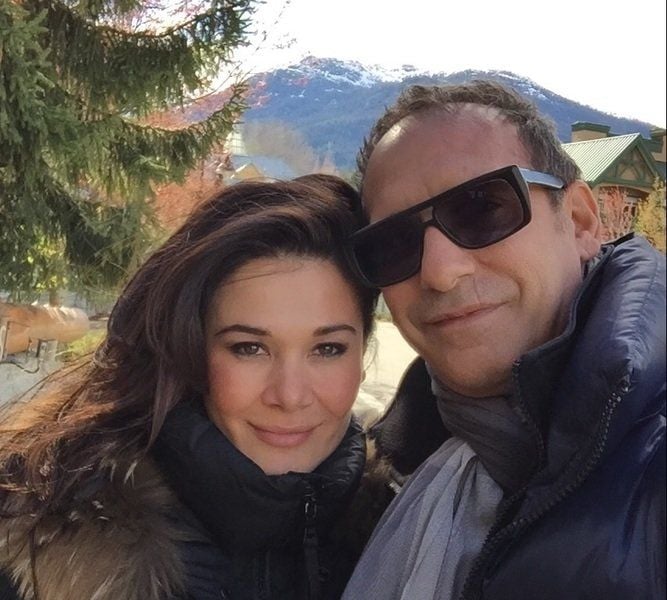 Courtesy photoMaria Lekkakos, owner of the salon M. Lekkakos in Wenham, and her husband Marc Harris, owner of Salon Marc Harris in Boston and New York, pose for a picture while visiting Whistler, British Columbia for an appearance in the Bravo show “Apres Ski.”

Courtesy photoMaria Lekkakos and her husband Marc Harris enjoy an elegant lakefront picnic during their stay in Whistler, British Columbia, as part of their appearance on Bravo’s docuseries “Apres Ski.” Lekkakos owns the high-end salon M. Lekkakos in Wenham, and Harris owns Salon Marc Harris in Boston and New York. The couple live in Boston.

Courtesy photoMaria Lekkakos, owner of the salon M. Lekkakos in Wenham, and her husband Marc Harris, owner of Salon Marc Harris in Boston and New York, pose for a picture while visiting Whistler, British Columbia for an appearance in the Bravo show “Apres Ski.”

Rockport native and Wenham business owner Maria Lekkakos and her husband Marc Harris are no strangers to being in front of a camera. Lekkakos was crowned Miss Massachusetts USA in 2004 and represented the state in the Miss USA pageant, and through their separate salon businesses, she and Marc have had other experiences being in the spotlight.

But the couple’s latest foray into the entertainment business was unlike anything they’d done before: Lekkakos and Harris appeared in the season finale episode of Bravo’s docuseries “Apres Ski,” which aired Dec. 21.

The show follows a team of staffers put together by Canadian hospitality mogul Joey Gibbons with the intent to launch a travel concierge business offering clients a luxury winter vacation in the posh resort of Whistler, British Columbia. The core of the show is the working and personal relationships between the team members, but each episode features different clients.

Lekkakos and Harris were two such clients. They were approached about doing the show about a year ago, and filmed their episode last winter.

“The network asked us to be on the show where we obviously had to agree to going to Whistler, and we were excited to have the opportunity to be on an amazing show and enjoy some of this high-end concierge, luxury adventure (experience),” Lekkakos said.

Harris admitted he was initially hesitant about the idea. Bravo had previously asked them to appear on other shows but they hadn’t felt any were the right fit.

They are both public figures in a way, as Harris owns a national brand, Salon Marc Harris — with locations in Boston and New York and an intent to expand — and Lekkakos owns M. Lekkakos, a salon, spa and boutique, as well as KosmetiQue, a medical spa adjoining M. Lekkakos, located at 154 Main St. in Wenham. Given their professional status, Harris was wary about the nature of reality shows.

“We wanted to get in and get out clean if you will, we don’t like a lot of drama in our lives and that’s the basis for a lot of these shows, so I was tentative,” said Harris.

However, after learning more about the show and what their role in it would be, the couple — who live in Boston — decided it was a good fit. Both Harris and Lekkakos are happy they got on board.

“I got the sense that we weren’t going to be the stars and that was perfectly fine with me, so we went out there with the idea that it would be a new experience, we had no idea who we’d meet or what the people were going to be like, but everyone on the show was charming and super down to earth,” Harris said.

For their role on the show, the concierge team set up a surprise for the couple: a trip around the mountains of Whistler via a floatplane, complete with a lakeside picnic.

“It was great, the sightseeing alone was amazing — it was breathtaking, flying around all the mountains,” said Lekkakos, who overcame her fear of heights to enjoy the views. “It was such a great adventure, a great experience, we’d never been to Whistler and we thought it was gorgeous; it’s breathtaking, something you see in a movie.”

Beyond their key activity, the couple, who stayed at the Four Seasons Hotel, enjoyed private time apart from the show, and were able to experience other aspects of the resort.

“There were great restaurants, the resort was very organic,” Lekkakos said. “I loved the feel, the smell of purity of Whistler, all the wilderness, the animals, it was beautiful, a stunningly gorgeous, picturesque space.”

As for how they feel about how the episode turned out, they watched it for the first time the night it aired and found it surreal but enjoyable.

“I thought the episode was amazing, it’s neat to see yourself on television as part of this extravagant fun adventure...” Lekkakos said. “I’d been on Miss USA but having us on this as a couple, and watching us was more exciting because it was with my husband and we were like ‘Oh my god, we did this?’ We were there, we did that! It was shocking.”

Lekkakos said that they have received positive feedback from friends, family and community members who either watched the show just to see them on it, or got a pleasant surprise when they unexpectedly saw the familiar faces.

Harris was pleased that the drama of the staffers in the episode didn’t affect how he and his wife were presented, and Lekkakos noted that it didn’t affect their vacation during filming.

“They treated us with such great care, showing us 100 percent high-end hospitality, we felt like this was a well presented group,” Lekkakos. “They were engaging, and we loved our experience.”

The episode featuring Lekkakos and Harris is available to stream on iTunes, the Bravo TV app, Amazon, Google Play, VUDU and XFINITY (depending on cable subscription).