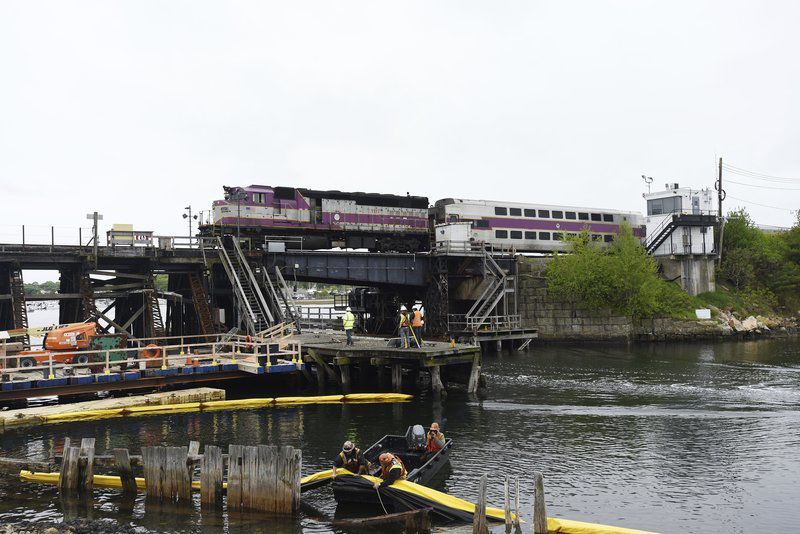 PAUL BILODEAU/Staff photo. MBTA commuter rail train 108 from Rockport to Boston heads over the Annisquam River in Gloucester. Starting Saturday, the train will only stop in West Gloucester as this bridge gets repaired. 5/30/19 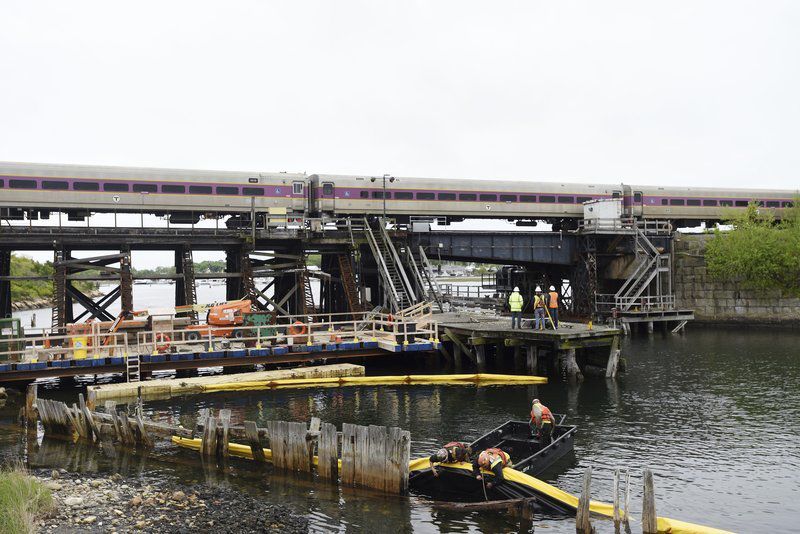 PAUL BILODEAU/Staff photo. MBTA commuter rail train 108, from Rockport to Boston, heads over the Annisquam River in Gloucester. Starting Saturday, the train will only stop in West Gloucester as this bridge gets repaired. 5/30/19

PAUL BILODEAU/Staff photo. MBTA commuter rail train 108 from Rockport to Boston heads over the Annisquam River in Gloucester. Starting Saturday, the train will only stop in West Gloucester as this bridge gets repaired. 5/30/19

PAUL BILODEAU/Staff photo. MBTA commuter rail train 108, from Rockport to Boston, heads over the Annisquam River in Gloucester. Starting Saturday, the train will only stop in West Gloucester as this bridge gets repaired. 5/30/19

The demolition of the aged wooden trestles on the south side of the Annisquam River rail bridge over the next two weeks will mean that riders on the MBTA's commuter trains will be taking shuttle buses between the Rockport and West Gloucester stations beginning Saturday.

The trestles' demolition will mark the latest and most visible step in the state Department of Transportation's work to replace the railroad drawbridge, which dates to 1911. The shutdown is needed because the drawbridge will be placed in the "up" position during the trestle demolition and other work.

The four-year project, estimated to cost $80 million, is expected to be completed in 2022. It is, by far, the most extensive work on and around the bridge, which underwent reconstruction in 1932 and other extensive work during the 1980s.  The project follows the bridge's designation in a 2011 state safety study as being in the worst structural condition of any bridge across the Massachusetts Bay Transportation Authority system.

The immediate effect on commuters and other rail riders is that train service to and from Boston's North Station will start and stop at the West Gloucester station off Essex Avenue (Route 133). Shuttle buses will carry passengers to complete the route.

All shuttle buses will be accessible for persons with disabilities, but bicycles will be prohibited on all buses during all service hours, Battiston's announcement indicated. More information on the Rockport-Gloucester-West Gloucester bus shuttle is available at mbta.com/gloucester.

Gloucester Harbormaster T. J. Ciarametaro said the coming two-weeks' work on the rail bridge is not expected to impact boat traffic beneath the bridge over that time frame as the boating season heats up.

"As far as I've been told, that's not going to disrupt any vessel traffic in the channel," he said Thursday. He said later work on the bridge — sometime between October and January — will force a full, two-week shutdown of the channel to boat traffic, but DOT has not yet advised him of specific dates. Dredging of the river is also on track to begin in October, and that will create "hindrances" to boat traffic on the river at the same time.

"There's going to be a lot going on on the river this fall," Ciarametaro said, "so people need to be aware that that's coming."

During the June 1 to 16 construction period, the south side of the existing timber trestle — the side closer to the harbor — will be demolished. Monitoring and testing will be performed on the north side of the bridge. The DOT has planned to work on each of the bridge's twin tracks separately so as to minimize the disruptions to commuter rail service. Trains will use one track while the other is under reconstruction.

MBTA spokesperson Joe Pesaturo said the agency will be scheduling 10 additional "weekend-only diversions" over the length of the project, though the shutdown that begins Saturday will carry through the next two sets of weekdays.

"Currently, there are no plans to divert (rail service) during weekdays," he said. "As construction progresses, however, there may be instances where additional diversions may be considered."

Once complete, the new Gloucester drawbridge will include new side-by-side, single-track moveable bridges, an updated east approach trestle with box beams on top of drilled shafts, and a relocated control tower on the Gloucester station side of the bridge, Battiston said.

Prep work already carried out by the Framingham-based J. F. White Contracting Co., which was awarded the contract in October 2017, has included steel bracing systems and strengthening of the north side of the bridge. The contractor also opened an office in Blackburn Industrial Park last year to utilize as a local base of operations.

Battiston said that, all in all, the project will deliver a number of benefits beyond the bridge's safety. MBTA officials have emphasized that, despite its structural woes, the existing bridge is safe for crossing, though trains regularly slow down prior to making their way onto and over the structure. Crews have also carried out several temporary maintenance projects on the bridge over the last five years.

“Replacing the Gloucester drawbridge is a key step toward improving commuter rail service on the Rockport line, along with targeted investments in the Beverly and North Station drawbridges,” MBTA General Manager Steve Poftak added in a prepared statement. “We know service diversions are inconvenient, but doing so allows us to get more work done and shorten the overall project schedule.”