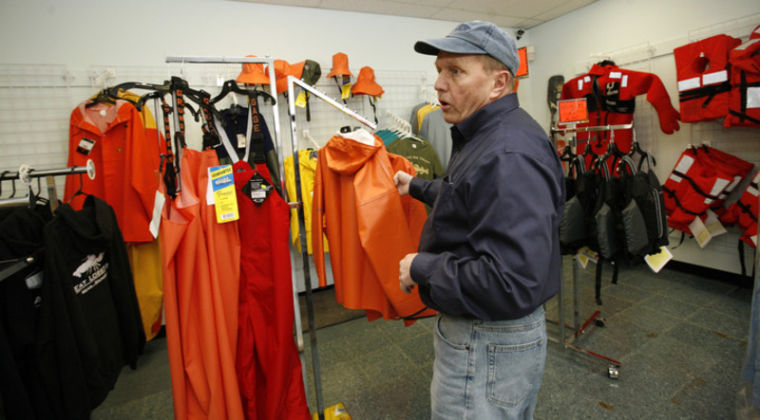 Skip Sheppard is president and owner of Three Lantern Marine & Fishing. This store is now one of a few in Gloucester serving the commercial fishing industry, recreational fishing, sailing and other boating pursuits. 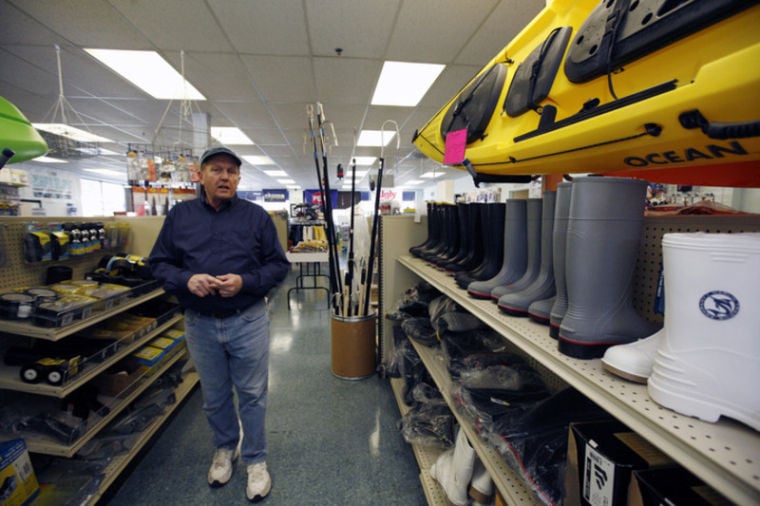 Skip Sheppard, president and owner of Three Lantern Marine & Fishing, in the store on Friday. This store is looking to pick up the slack in the commercial fishing industry after the closing of Winchester Fishing.

Skip Sheppard is president and owner of Three Lantern Marine & Fishing. This store is now one of a few in Gloucester serving the commercial fishing industry, recreational fishing, sailing and other boating pursuits.

Skip Sheppard, president and owner of Three Lantern Marine & Fishing, in the store on Friday. This store is looking to pick up the slack in the commercial fishing industry after the closing of Winchester Fishing.

For most of its 30-year existence, Winchester Fishing Co. on lower Washington Street was the one-stop shop for fishing and lobster gear.

But Dick Winchester sold the property a year ago and has retired, closing his doors for the last time last month.

Fear not fishermen of all kinds, stepping in to fill the void — and then some — is Gloucester’s largest and most diversified fishing and lobster gear business ever.

The Three Lantern Shop, the entrepreneurial dream come true for Skip Shepard after a long career in corporate America, replaced the Three Lanterns Shop last spring. — That dropped ‘s’ in ‘Lantern’ was an accident of corporate registration, and quite the exception for the hyper-precise and -organized Shepard, a native of the Bath, Maine area who has lived in Ipswich for 12 years.

But it was the closing of Winchester’s that pushed Shepard and his expansive shop — 3,200 square feet at the entrance to Parker Street — into the forefront.

The size of the business expands by about one half if one counts the Gloucester construction and warehouse facility of the Sea Rose Trap Co. The Scarborough, Maine-based company not only makes and repairs lobster traps, replacing Winchester’s essential service to the commercial and recreational lobsters, but also — using the same materials — makes furniture, creating the sense of rocking back and forth in a chair that seems to have morphed from a trap.

Shepard exhibits a penchant for inclusion, exemplified by the fusion of space for an independent lobster trap building and repair operations. After he bought out Mike Parisi, Shepard set about creating the most diverse fishing tackle business the city has ever known, an ultra modern, example of a business that has tended from dusty to quaint.

A mid-20th century example of the latter was Gleason’s bait and tackle shop on Washington Street just north of Whittemore Street, presided over by the late George Gleason.

The gnarly Gleason, seemingly a character created by Norman Rockwell, would invariably attempt to make converts to the Republican Party of seaworm customers.

Gleason eventually turned the business over to his son, who ran it in the early 2000s on the property on Eastern Avenue. But by then Winchester’s was the cat’s meow, with its striper and bluefish tournament, wide range of casting and trolling gear, lobster trap making and fixing, and the only place on Cape Ann where live eels were for sale.

As Winchester’s relegated Gleason’s to memory, so the Three Lantern Shop will embody the new era of full service fishing sales and service, and embody what today’s customers will insist is the epitome of modern.

The facts are that Dick Winchester sold his property and planned to close the shop — its last day was in April —before Shepard bought out the Three Lanterns Shop and launched the Three Lantern Shop last spring. Shepard said his location, with dockage at the end of the Inner Harbor, will allow fishing boats to arrive and depart by water.

He also said he has invited Winchester to direct and manage his signature striper and blue fish tournament from the new facility. In any event, Shepard said he would be the new host of the heralded tournament

A tuna fisherman, Shepard has already made a contribution to last year’s Blue Fin Blowout and intends to make the association more intimate

“That was my thing as a teenager,” said Shepard of turn fishing.

For now, the one commodity Shepard will not offer is live eels, but he said the Fin and feather Shop in Essex will have eel tanks.

Otherwise, he will have all kinds of bait and tackle, and commercial safety equipment for boats and a line of handmade silver jewelry, with a fishing and nautical theme.

He effused about his location.

“Every lobsterman drives by here every day to get bait,” said Shepard. “I’m trying to diversify enough to survive,” he added.

But Shepard’s primary product lines are for recreational anglers. “We’re really into it in a big way.”

His motto for The Three Lantern Shop: “If we don’t have it, ask.”