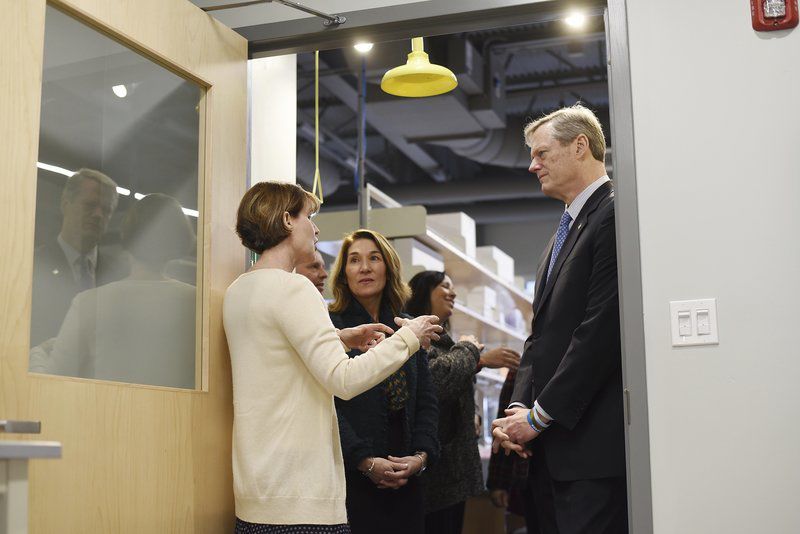 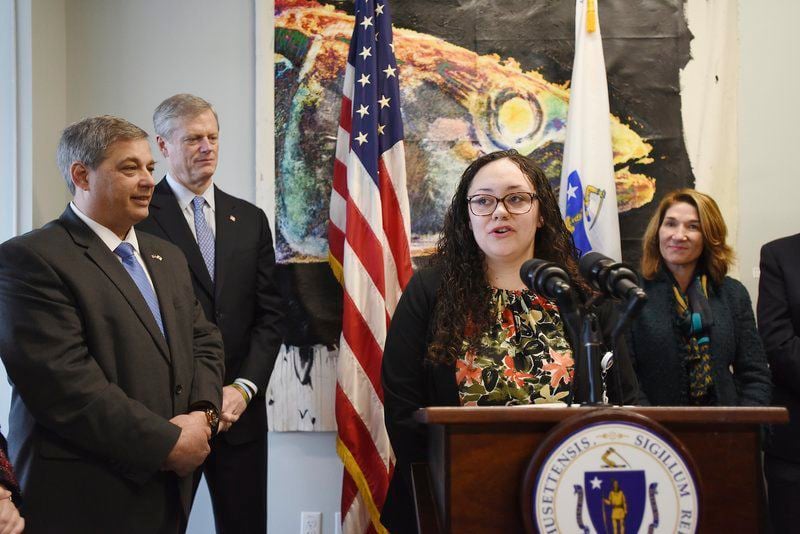 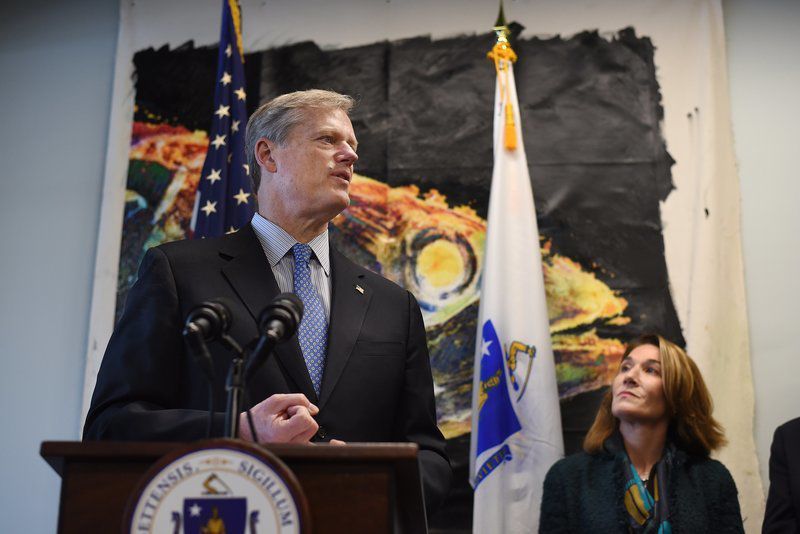 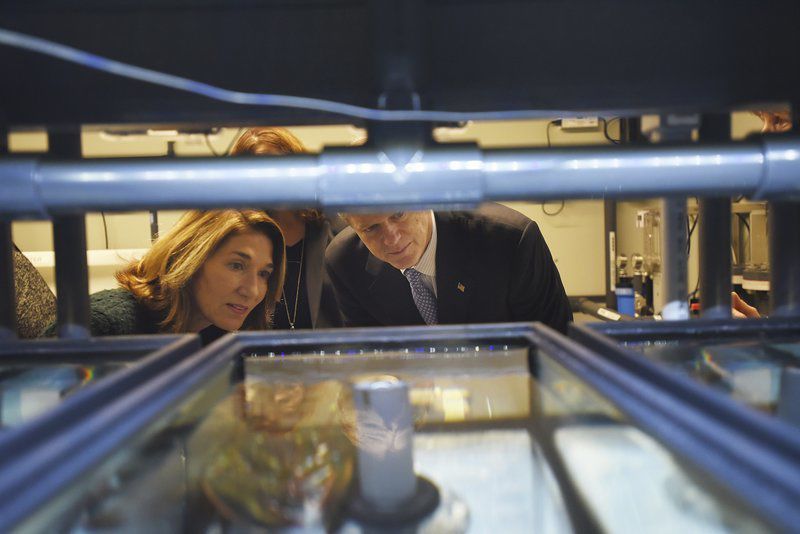 PAUL BILODEAU/Staff photo. Lt. Gov. Karyn Polito, left, and Gov. Charlie Baker look at a lobsters in a holding tank during a visit to the Gloucester Marine Genomics Institute. GMGI is hosting Baker and the announcement of a number of Workforce Skills Capital Grants awards. GMGI also is one of the recipients. 2/25/20 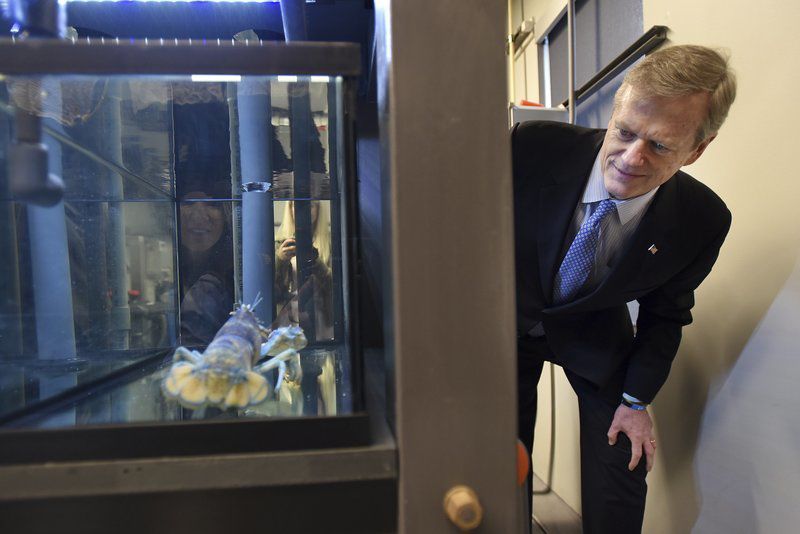 PAUL BILODEAU/Staff photosGov. Charlie Baker checks out a blue-shelled lobster in a holding tank during a visit to Gloucester Marine Genomics Institute on Tuesday. GMGI hosted Baker for the announcement of a number of Workforce Skills Capital Grants awards, one of which GMGI received.

PAUL BILODEAU/Staff photo. Lt. Gov. Karyn Polito, left, and Gov. Charlie Baker look at a lobsters in a holding tank during a visit to the Gloucester Marine Genomics Institute. GMGI is hosting Baker and the announcement of a number of Workforce Skills Capital Grants awards. GMGI also is one of the recipients. 2/25/20

PAUL BILODEAU/Staff photosGov. Charlie Baker checks out a blue-shelled lobster in a holding tank during a visit to Gloucester Marine Genomics Institute on Tuesday. GMGI hosted Baker for the announcement of a number of Workforce Skills Capital Grants awards, one of which GMGI received.

Sara Corchado probably didn’t expect to be thrust so prominently into the light on Tuesday, as the Gloucester Marine Genomics Institute celebrated its collection of another hefty state grant and the Baker administration touted its efforts to entwine economic innovation with education.

And there was GMGI itself, and the success the institute has enjoyed from its cutting-edge marine genomics research, its visionary academic element and its practical ability to tap into the public-private reserve of grants and fundraising.

The institute on Tuesday received a $940,569 Skills Capital grant, one of 54 academic institutions to share $14.6 million from the state grants program.

The grants, which will be paid out over two years, require a 33% local match. GMGI said it already has secured support pledges from three of its corporate partners — New England Biolabs, BioMed Realty and the Payette design firm — and is working on more.

GMGI said it will use the funds to build and outfit a new biomanufacturing lab at the Gloucester Biotechnology Academy to expand the academy's scope of training into the burgeoning discipline and potentially double its current enrollment of about 20 students per class.

But it was the 21-year-old Corchado, a proud 2017 graduate of Gloucester High School and the valedictorian of her 2018 graduating class at GMGI’s Gloucester Biotechnology Academy, who luminously connected the pixels on why everyone was there in the first place.

Her story is the essence of the GMGI story, of young talent looking for an incubator and finding a portal into a whole new life. It’s also at the heart of the race for a place in the sun of the new economy.

“I was on the verge of dropping out of high school,” Corchado said, tracing her path from what she found to be the wearisome nature of the traditional school day to the inspiration of the lab and the thrall of science. And when she learned of the academy, she didn’t hesitate.

Today, Corchado is a chemistry student at Salem State University. But she’s so much more than that. She holds three positions on the SSU campus, including serving as a peer tutor in chemistry for other SSU students.

She has completed internships in the labs at the Dana-Farber Cancer Institute in Boston and at the Massachusetts Institute of Technology in Cambridge.

Her remarks, delivered with a poise and intelligence that left everyone in the room smiling, also gave a face to the ongoing economic reformation that will shape the future.

Biotechnology. Digital media platforms. Blue economy. World-class research. Skills Capital grants. Whatever it takes to navigate the economic rapids. Create sustainable jobs in cutting-edge disciplines and the skilled workforces to populate them and serve as economic flotation devices for the communities that host them.

That is the world that will belong to Corchado and her contemporaries at the academy and throughout the commonwealth.

There were probably more than a few days of sitting through class lectures, her inspirational pilot light still on flicker, that this daughter of Gloucester wondered what she was going to do with her life.

The original version of this story, published online and in print, required clarification. The Gloucester Marine Genomics Institute received the $940,569 state grant to be used to build and outfit a biomanufacturing training lab at GMGI's Gloucester Biotechnology Academy, not by GMGI itself.