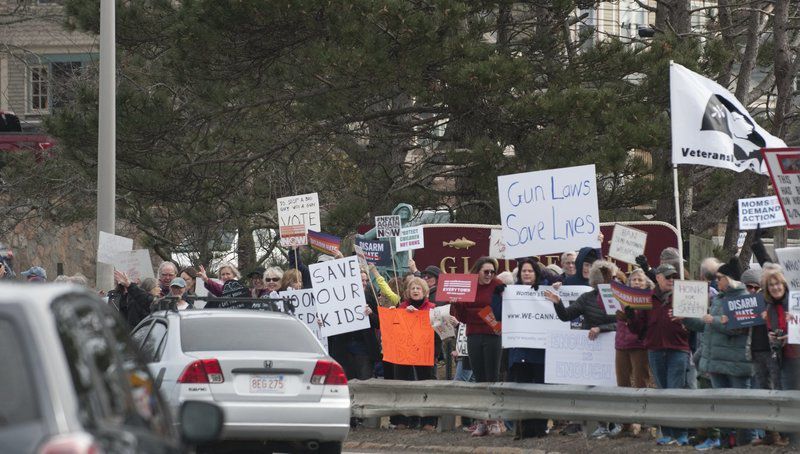 JIM VAIKNORAS/Staff photo/Teachers and veterans were among the  150 to 200 people holding signs and waving to cars at Grant Circle in Gloucester on Saturday as they protested gun violence. 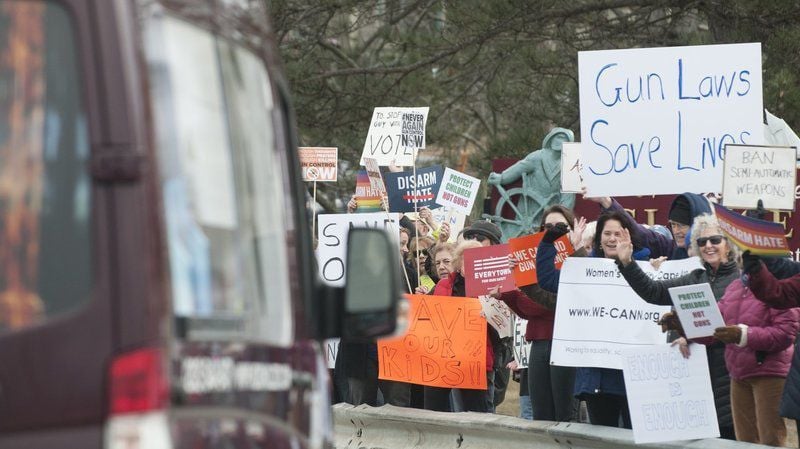 JIM VAIKNORAS/Staff photo/Many drivers honked at the 150 or so people gathered at Grant Circle in Gloucester on Saturday to protest gun violence. 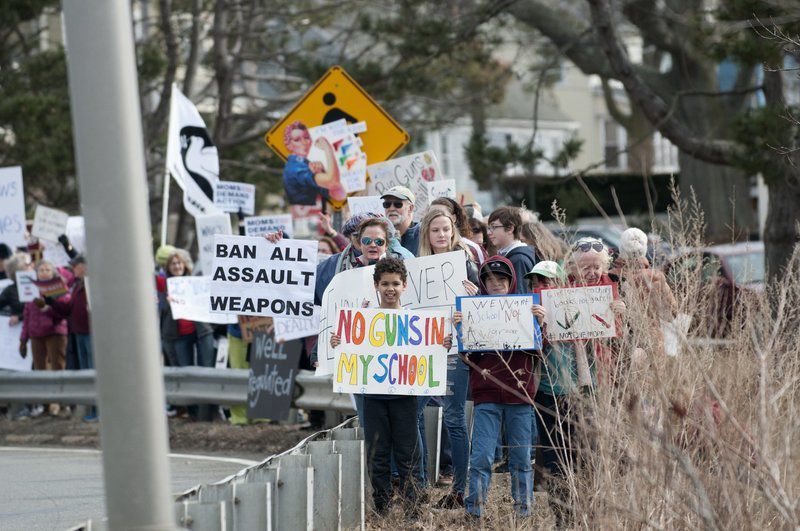 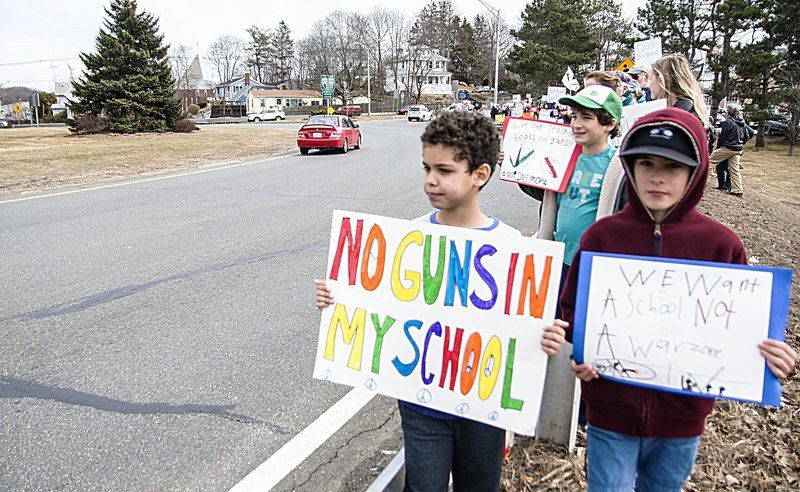 JIM VAIKNORAS/Staff photo/ Aadan DeLeonjob, left, 8, along with Winston and Solomon Rich, both 10, were among about 150 to 200 people who gathered at Grant Circle in Gloucester on Saturday to protest gun violence.

JIM VAIKNORAS/Staff photo/Teachers and veterans were among the  150 to 200 people holding signs and waving to cars at Grant Circle in Gloucester on Saturday as they protested gun violence.

JIM VAIKNORAS/Staff photo/Many drivers honked at the 150 or so people gathered at Grant Circle in Gloucester on Saturday to protest gun violence.

JIM VAIKNORAS/Staff photo/ Aadan DeLeonjob, left, 8, along with Winston and Solomon Rich, both 10, were among about 150 to 200 people who gathered at Grant Circle in Gloucester on Saturday to protest gun violence.

It was all about solidarity against gun violence this Saturday at Gloucester’s Grant Circle, and it’s hard to say which was loudest: the car horns, the bull horns, or the passionate voices of Cape Ann residents raised, along with homemade signs and placards, proclaiming #NeverAgain.

The rally, the first of weekly Saturday anti-gun gatherings planned at the rotary, was organized last week by Kimberlee Cloutier-Blazzard, co-founder of WECANN (Women’s Equality on Cape Ann) and scheduled to start at noon, but by 11:30 a.m., a crowd had already started to gather, and as more and more cars kept turning into Friendly’s parking lot, it was clear that most weren’t there for ice cream.

Emerging from their car bearing signs, Roger Garberg and Mern Sibley surveyed the size of the crowd. “This is amazing. I’ve not seen anything like this before, have you?” asked Garberg. “It’s incredible, the passion and concern, if anything, is growing,” said Mern. And like everyone else gathered at Grant Circle on Saturday, Garberg and Mern put gave credit to “the kids.” Particularly the teenagers at Parkland, Florida’s Marjory Stoneham Douglas High School, who, after losing 17 classmates and school staffers in a mass shooting on Valentine's Day, are campaigning for gun control and have inspired many to do the same.

Estimates of that crowd varied from a conservative low of 150 upwards to 200. Spread out two and three deep along the road, parents, grandparents, children, grandchildren, clergy leaders and quite a few teens were buoyed by thumbs-ups, cheers, and loud honks from passing cars and trucks.

Although this not surprisingly caused a bit of a traffic bottleneck where Route 128 meets the rotary, nobody seemed to mind. Spirits were high.  An emotional Virginia Graves of Rockport was at a loss for words. “This is very encouraging,” she said. Susan Parent, on the other hand, thought “There should be a thousand more here.”

Parent, owner of the downtown toy shop Toodeloos, was live streaming the rally on Facebook. She was not the only one using her smart phone as a social media tool. Virtually everyone was, including Alan Macmillan, a Vietnam veteran who said he’d been researching a letter to the Gloucester Daily Times. “The NRA gave $30 million to Trump,” he said incredulously. “This is not the country I fought for.”

Barbara Sachs and Nancy Goodman, both of whom worked in the Gloucester school system —Sachs for decades— were joined by Ellen Leaman of Gloucester, who also taught for years in Gloucester. “We’re doing the work,” said Leaman, when asked what brought the three women there. All three said they are adamantly opposed to guns in the classroom. “That’s not what teachers do,” said Sachs. Leaman agreed, saying, “Asking teachers to protect children, as if guns protect them! How could you say not to protect our kids? The whole thing is just, I don’t want to call it a partisan issue, or even a political issue, it’s a humanitarian issue. When you see so many people out here being mobilized, well, it’s amazing.”

“We’ve got to save our kids,” said Jim Schoel bluntly. A long time educator and co-founder of Project Adventure, Schoel recalled the loss of one of Gloucester’s own, Galen Gibson, killed 25 years ago when a fellow student went on a shooting binge at Simon' Rock of Bard College in Great Barrington. He spoke of Galen’s father Greg Gibson —author of a memoir about that tragedy “Gone Boy” — who last Sunday in a column published on the op ed page of the New York Times wrote that he was “fed up with vigils, candles and moments of silence."

There was nothing silent or vigil-like about Saturday’s gathering. Loud and passionate, it reminded many of the “boomers” present of the civil rights and anti-war protests of the 1960s. “It’s a revolution, a sea change," said Gordon Baird, who, despite recent hip replacement surgery had come hobbling on a cane with his wife, author JoeAnn Hart. “I feel very emotional about today,” said Hart. “We cannot start arming our children. The Second Amendment is moot.”

The Second Amendment was also the focus of much of Saturday’s conversations. “People who are so hung up on the Second Amendment should join the military,” said Amy Shapiro, whose husband is a veteran, and who also has an extensive background as a local educator. “It's crazy that we have to tolerate military-grade weapons and killing machines in the hands of civilians. I’ve advised 80 or more teachers, and the number one government priority in teaching is a safe and healthy classroom. The whole notion of arming teachers is insane.”

Peg Leeco, a member of Moms Take Action for Gun Safety, which works with WECANN and other local activist groups, said, speaking of the momentum generated by the survivors of the Florida school shooting, “What those high schoolers, who are so eloquent, have made happen in two short weeks is nothing short of miraculous. Now we have groups working hand-in hand. Schools should not be prisons. No more silence, end gun violence now.”

It was hard to hear Leeco while she spoke. She was almost drowned out by the crowd, coaxed by a young mother on a bullhorn, chanting, “This is what democracy looks like.”

Stand up to Gun Violence, Saturdays, from noon to 1 p.m. at Grant Circle rotary in front of the "Welcome to Gloucester" sign. Bring signs and park in the lot at Cape Ann Plaza, 226 Washington St.

National 17-minute school walk-out is scheduled for March 14 in honor of the 17 who died in a mass shooting at Marjory Stoneham Douglas High School in Parkland, Florida, on Feb. 14.

March for Our Lives events planned for March 24 on Cape Ann, in Boston and Washington.

Rally against Gun Violence in Gloucester

Guns not a hot topic at Moulton town hall

SAUGUS -- On Tuesday, a Republican congressman from Colorado was booed over his position on gun control when he held a town hall in his home d…