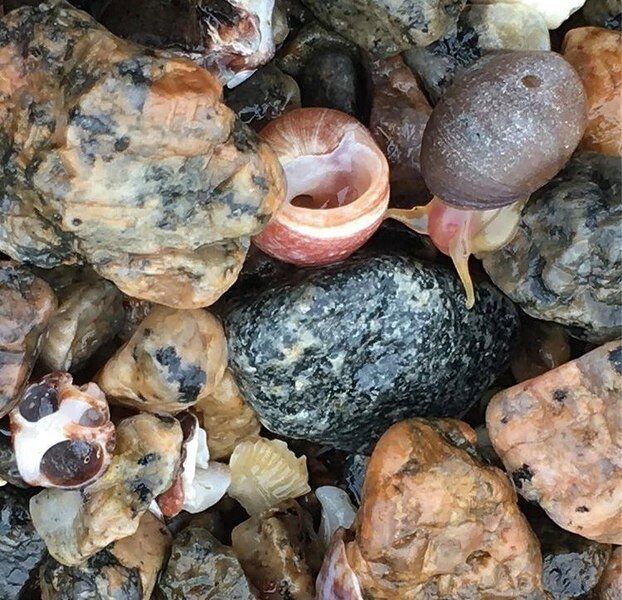 A snail works its way over stones washed up into a tidal pool at the tip of Coolidge Reservation's Ocean Lawn. Taylor Ann Bradford/Staff photo 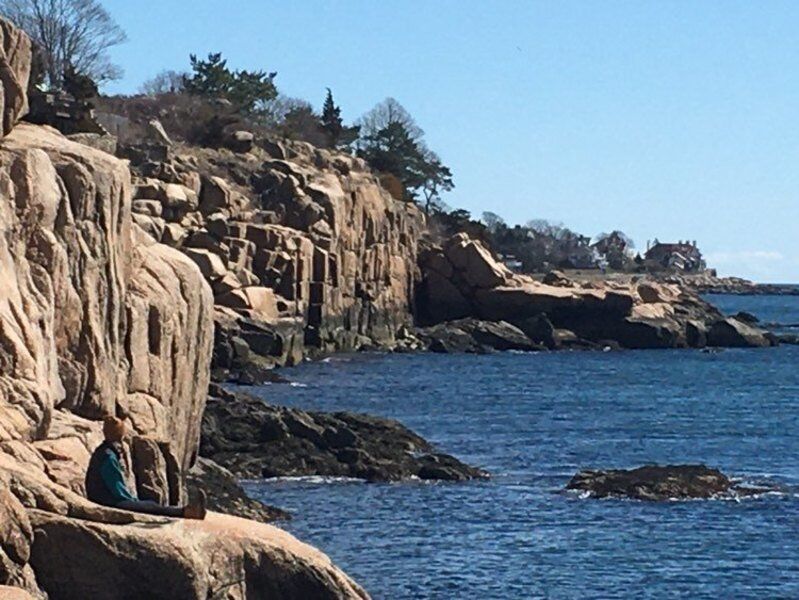 A woman enjoys the view of the ocean while sitting on the rocks at the tip of Ocean Lawn. Taylor Ann Bradford/Staff Photo

A snail works its way over stones washed up into a tidal pool at the tip of Coolidge Reservation's Ocean Lawn. Taylor Ann Bradford/Staff photo

A woman enjoys the view of the ocean while sitting on the rocks at the tip of Ocean Lawn. Taylor Ann Bradford/Staff Photo

History is often cemented in time by towering castles or crumbling foundations.

But at the Coolidge Reservation in Manchester-by-the-Sea, an expansive lawn and towering tree is all that is left to commemorate the rich history of the Coolidge family's Georgian-style home.

I'm getting ahead of myself, though.

Long before pedestrians will reach the reservation's Ocean Lawn, a trail network weaves its way by tidal pools, sandy shores, and a rocky path.

The highest point at the reservation is Bungalow Hill, a modest incline that — at its very summit — makes for a pleasant view of the seashore and neighboring coast.

A steady jaunt or casual stroll through the trails will lead any intrepid explorer to a gravel trail sandwiched between the waters of Clarke Pond — a former salt marsh that was, according to the Essex Heritage — cut off from the tide when its inlet was filled.

Many of the seagulls that take a rest at Clarke Pond come from only a stone's throw away at Grey (Magnolia) Beach, which has a sandy connection point just past the pond and right before a gate that guards the Ocean Lawn path.

Bearing right at the gate, the trail crosses over a cement driveway and up a well-maintained path to Ocean Lawn.

The jump between woods and lawn is rather abrupt as the space opens up to not only showcase the Coolidge family's old property, but the vast Atlantic Ocean that goes on for miles and miles.

All that is left of the Coolidges' "Marble Palace" is a stone outline of the building's footprint, but the history is much more grandiose than that.

According to The Trustees of Reservations, the property was acquired by Thomas Jefferson Coolidge in 1871 for $12,000 and the first residence was built — a summer cottage of white clapboard.

In 1904, a second building made of brick with a marble foundation was built on Ocean Lawn. Known as the "Marble Palace," the home would welcome guests such as President Woodrow Wilson and Crown Prince Olav of Norway.

In 1990 and 1991, according to the Trustees, the family donated a good portion of the property to The Trustees. The reservation was established a year later in 1992.

That same year, Bungalow Hill was gifted to the reservation by the Essex County Greenbelt Association, who had acquired the land from the Coolidge family in 1983.

And now, protected and maintained by The Trustees, the reservation provides ample space for frolicking, exploring, tidal pooling, and resting under the foliage of big trees.

A different type of grandiose to the building that once was, but wonderful nonetheless.

Want to suggest your favorite trail for review? Let staff writer Taylor Ann Bradford know. While carrier pigeon is her preferred mode of communication, she can be reached at 978-675-2705 or tbradford@gloucestertimes.com.

Trailhead(s): 15 Coolidge Point in Manchester-by-the-Sea. After taking a left onto Lincoln Street drive (or gallop) for half a mile to the stop sign at the intersection with Route 127. Turn left onto Route 127 and follow for 2.2 miles to the entrance and parking lot on the right. The lot holds 10 cars.

Ocean Lawn is open year-round on Friday, Saturday, Sunday, and Monday from 8 a.m. to sunset.

Gray (Magnolia) Beach is open May through September from 8 a.m. to sunset.

Remainder of reservation is open year-round daily from sunrise to sunset.