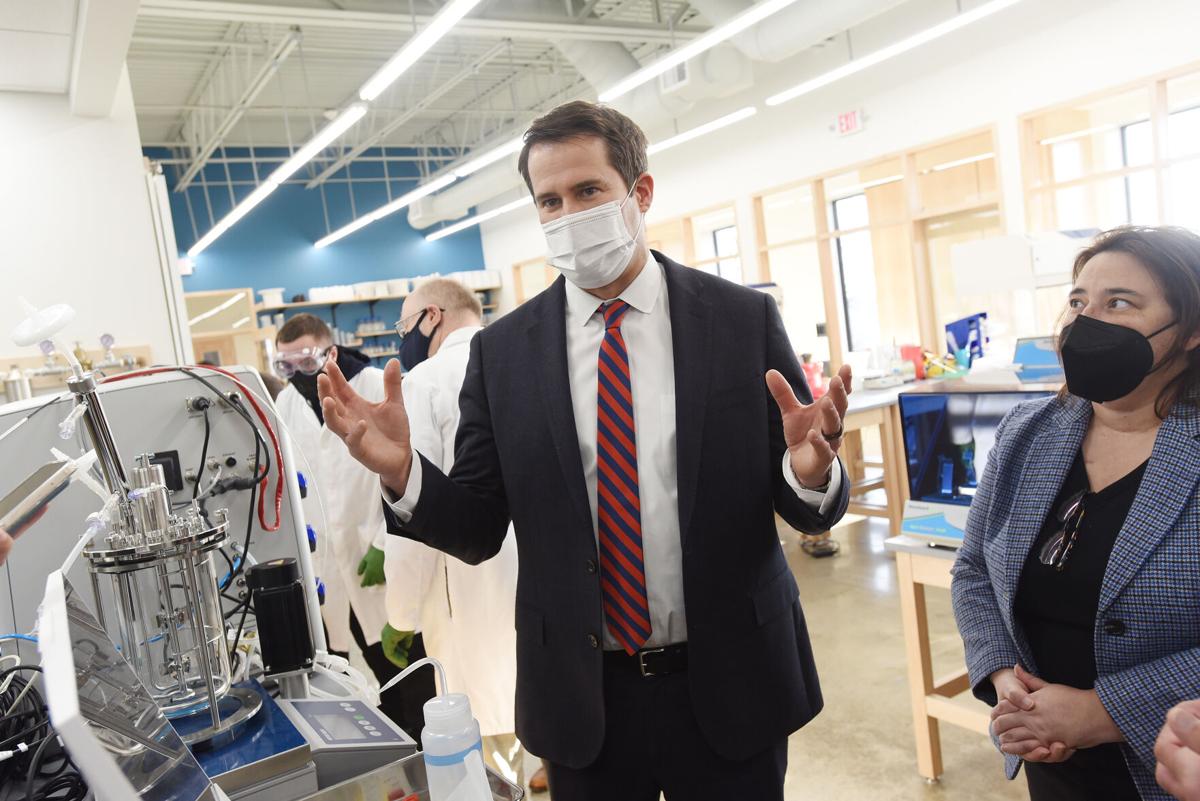 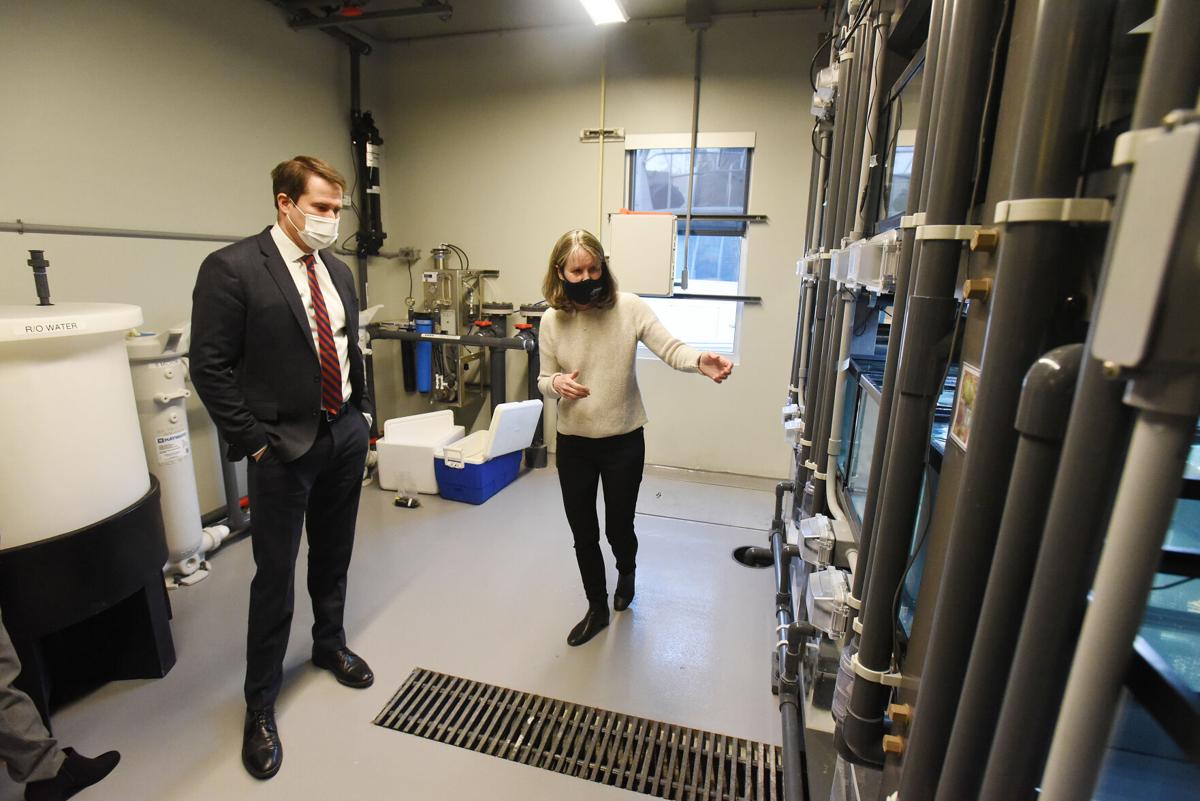 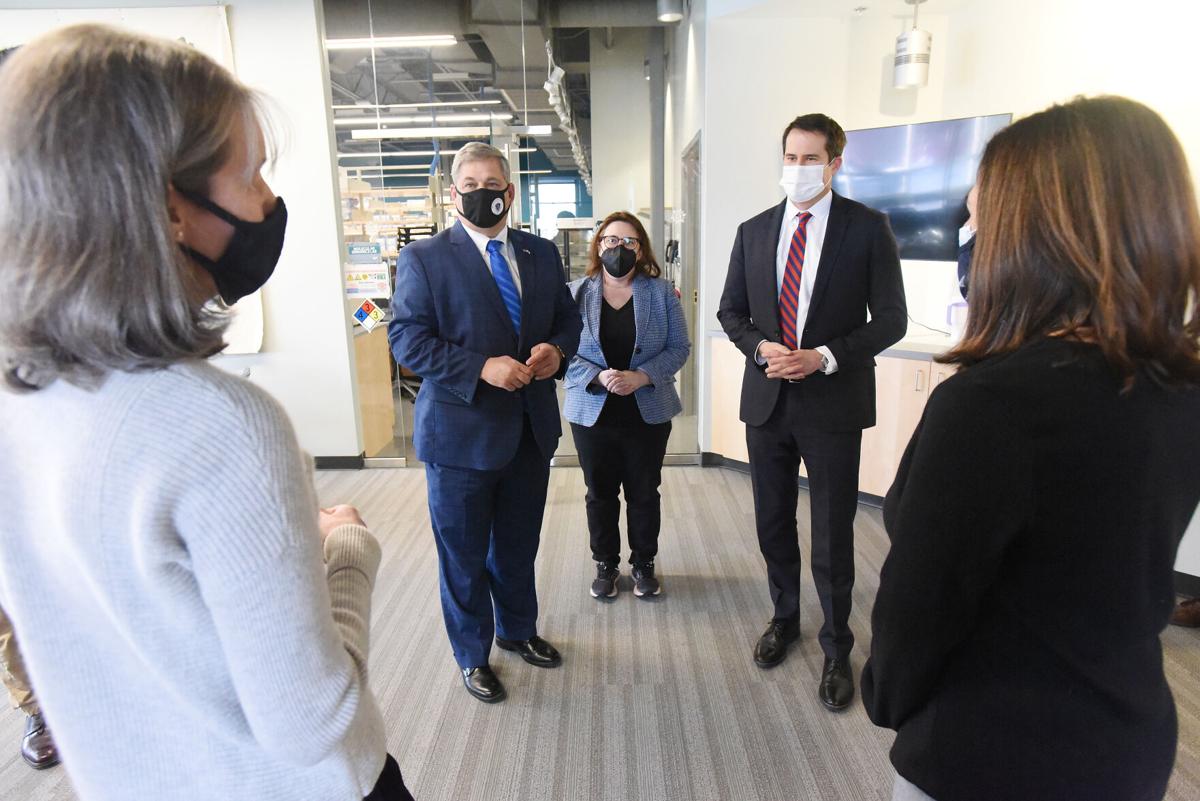 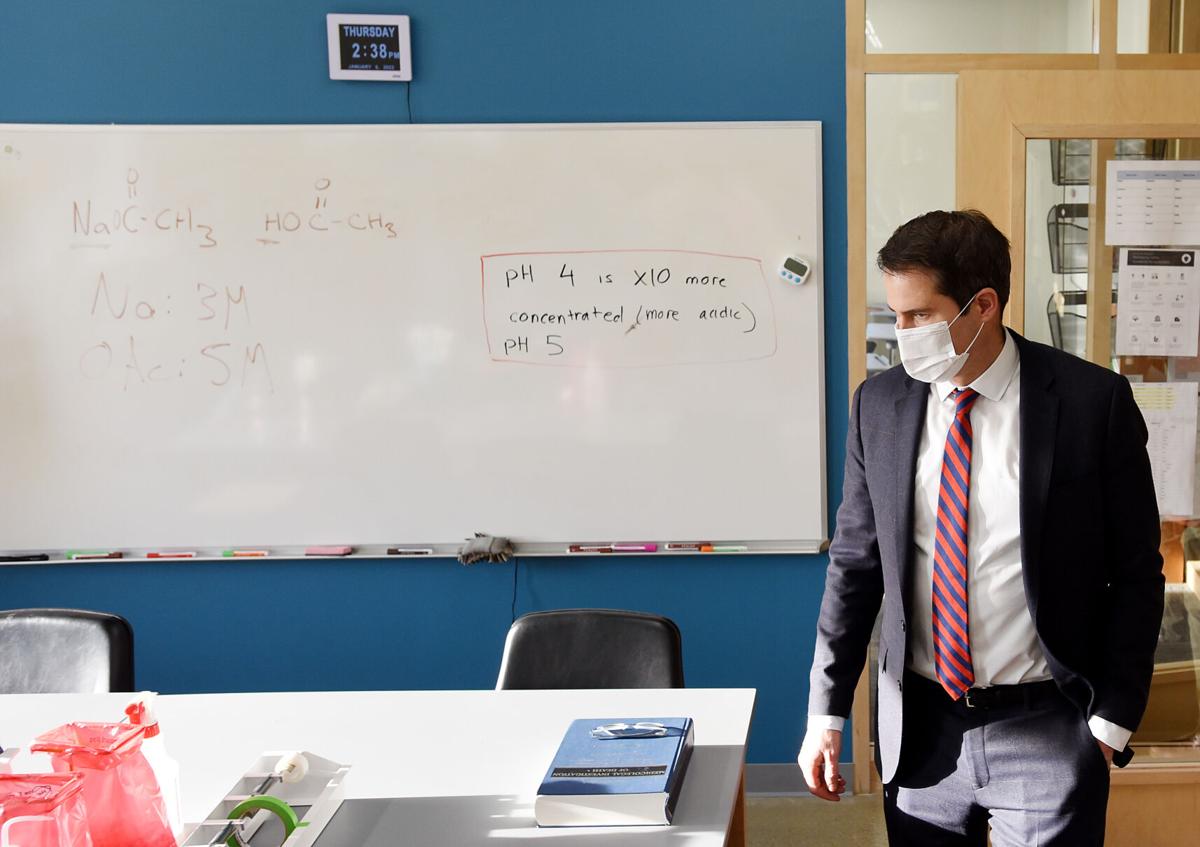 U.S. Rep. Seth Moulton walks into an classroom laboratory at the Gloucester Biotechnology Academy during a tour of the Gloucester Marine Genomics Institute (GMGI) to discuss additional ways to support biotech research and workforce development.

U.S. Rep. Seth Moulton walks into an classroom laboratory at the Gloucester Biotechnology Academy during a tour of the Gloucester Marine Genomics Institute (GMGI) to discuss additional ways to support biotech research and workforce development.

There, he learned how the institute is making a difference when it comes to spurring marine biotech research in this 399-year-old seaport undergoing a sea change from its legacy fishing industry to a community able to attract life sciences companies.

He saw firsthand programs that will be helped by $1 million from the state Legislature’s pandemic relief bill, a combination of money from the federal American Rescue Plan Act (ARPA) and the state budget surplus.

“This is fantastic,” Moulton said afterward. “I mean this is exactly what we need to see more of in terms of education but also in terms of our economy. There’s a synergy between the economic lifeblood of Massachusetts and tremendous educational opportunities for our students, this is incredible.”

Moulton said he was thrilled when he heard the $1 million was going into biotech in Gloucester. Ferrante called the investment in GMGI “important.”

GMGI’s science strategy is based, Bodnar said, on addressing biomedicine and biotechnology, ecosystem function and health, which she said uses genetic and genomic tools to understand the diversity of the marine ecosystem and the impact of environmental and climate change, and fisheries and aquaculture.

Bodnar said the COVID-19 pandemic has impacted operations, including limiting access to the lab and delaying the generation of experimental data because staff couldn’t get out into the field.

“We are really, really appreciative of all the funding that is really going to allow us to accelerate our research program,” Bodnar said.

“Are you guys fully operational now?” Moulton asked. Bodnar said GMGI had come up to full strength but as COVID-19 cases have been on the rise, it has been encouraging those who can work from home to do so.

Bolzan said at the academy, it’s 100% in-person, hands-on learning in a lab.

“We are pleased that we have gone this whole time without a single case amongst the students,” Bolzan said.

Looking to the future

Tarr said the institute is getting its share of attention, and people are interested in coming to the city, but finding housing can be an issue, so it’s important the city grows in the right way.

“Because what were the jobs of tomorrow are the jobs of now, so we want to be ready to make Gloucester the place to be,” Verga said.

At the Biotechnology Academy, Moulton toured a bio-manufacturing lab and learned about the overall workforce training program for young people who have high school degrees or an equivalent and who are un- or under-employed. There, they get hands-on vocational training in a lab, plus career skills training from time management to writing a resume, which they can then use to obtain good-paying jobs in biotech.

Doyle, the education director, said the program has 18 students this year, with plans to enroll 40 in the fall.

“This is an idea that is really going to break the bachelor’s (degree) barrier,” said Bolzan, “and there is an anticipation that there are 43,000 bio-manufacturing-related jobs that are going to be needed to be filled by the end of 2024” in the state. Bolzan said the Biotechnology Academy is the only one of its kind, and it’s been getting a lot of attention and there is pressure to expand.

“That is what the ARPA funding is going to help support,” Bolzan said.

Staff writer Ethan Forman can be reached at 978-675-2714, or by email at eforman@northofboston.com.

Staff writer Ethan Forman can be reached at 978-675-2714, or by email at eforman@northofboston.com.