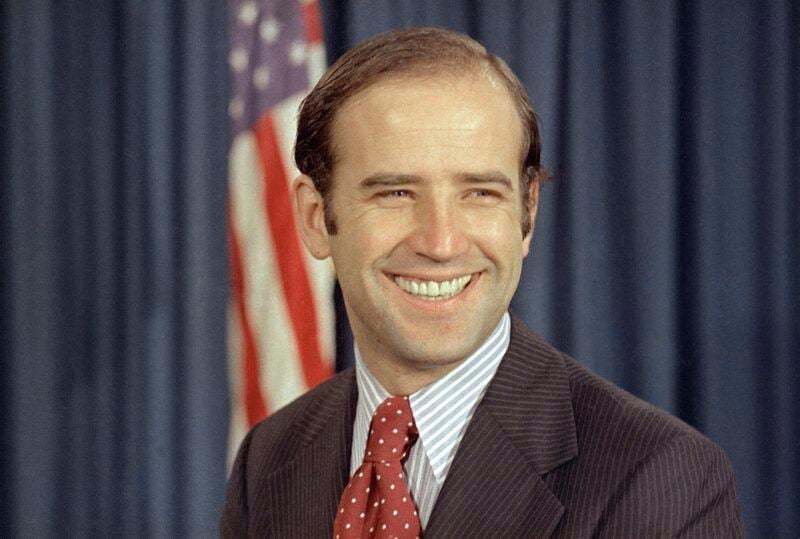 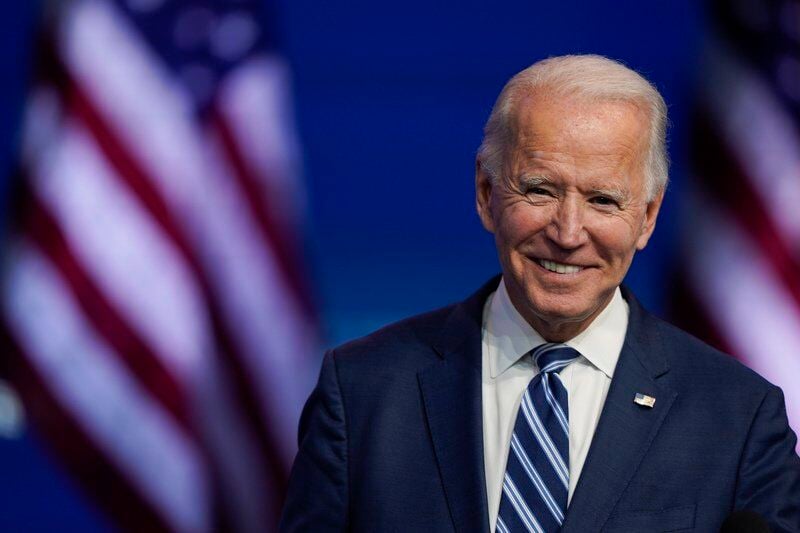 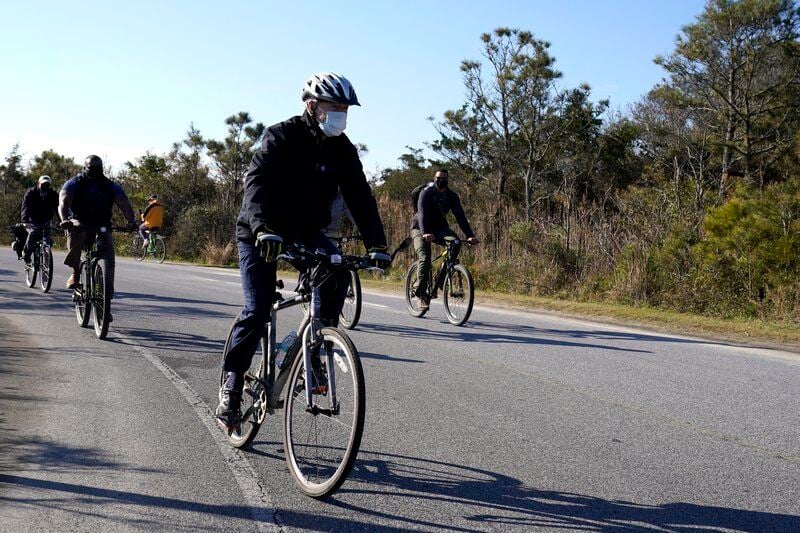 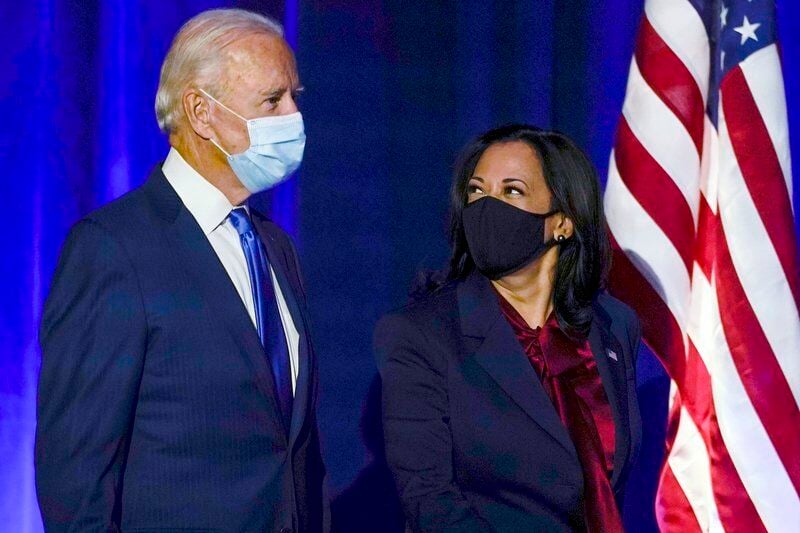 As he wrestles with those issues, Biden will be attempting to accomplish another feat: demonstrating to Americans that age is but a number and he's up to the job.

Biden will be sworn in as the oldest president in the nation’s history, displacing Ronald Reagan, who left the White House in 1989 when he was 77 years and 349 days old.

The president-elect spent his birthday in Delaware at work on the government transition, including a meeting with Congress' top two Democrats: House Speaker Nancy Pelosi and Sen. Chuck Schumer. During the closed-door portion of the meeting, Pelosi presented Biden with a white orchid, one of her signature flowers, an aide said.

The age and health of both Biden and President Donald Trump — less than four years Biden’s junior — loomed throughout a race that was decided by a younger and more diverse electorate and at a moment when the nation is facing no shortage of issues of consequence.

Out of the gate, Biden will be keen to demonstrate he's got the vigor to serve.

“It’s crucial that he and his staff put himself in the position early in his presidency where he can express what he wants with a crispness that's not always been his strength," said Ross Baker, a political scientist at Rutgers University who has advised legislators from both parties. “He has got to build up credibility with the American people that he’s physically and mentally up to the job.”

Throughout the campaign, Trump, 74, didn’t miss a chance to highlight Biden’s gaffes and argue that the Democrat lacked the mental acuity to lead the nation. Both critics and some backers of Biden worried that he was sending the wrong message about his stamina by keeping a relatively light public schedule while Trump barnstormed battleground states. Biden attributed his light schedule to being cautious during the coronavirus pandemic.

Some of Biden’s rivals in the Democratic primary also made a case on age — while skipping Trump’s vitriol — by raising the question of whether someone of Biden’s and Trump’s generation was the right person to lead a nation dealing with issues like climate change and racial inequality.

Brian Ott, a Missouri State University communications professor who studies presidential rhetoric, said Biden was hardly impressive as a campaigner but has proved far more effective with his public remarks since Election Day.

Ott said Biden's victory speech was poignant, and his empathy showed in a virtual discussion that he held earlier this week with frontline health care workers. The president-elect’s experience — a combination of age and nearly 50 years in politics — conveys more clearly through the prism of governing than the chaos of campaigning, he said.

Biden’s relatively advanced age also puts a greater premium on the quality of his staff, Baker said. His choice of Sen. Kamala Harris, nearly 20 years younger than him, as his running mate effectively acknowledged his age issue. Biden has described himself as a transitional president but hasn’t ruled out running for a second term.

“He’s well served in making it known from day one that she’s ready to go,” Baker said of Harris. “She’s got to be in the images coming out of the White House. They also need to, in terms of their messaging, highlight her inclusion in whatever the important issue or debate is going on in the White House.”

Biden, in a September interview with CNN, promised to be “totally transparent” about all facets of his health if elected, but he hasn’t said how he'll do that.

The campaign has made the case that Biden isn’t your average septuagenarian.

His physician, Dr. Kevin O’Connor, in a medical report released by the campaign last December, described Biden as “healthy, vigorous ... fit to successfully execute the duties of the Presidency, to include those as Chief Executive, Head of State and Commander in Chief.”

O’Connor reported that Biden works out five days a week. The president-elect told supporters that during the pandemic he has relied on home workouts involving a Peloton bike, treadmill and weights.

In 1988, Biden suffered two life-threatening brain aneurysms, an experience that he wrote in his memoir shaped him into the “kind of man I want to be.” O’Connor also noted in his report that Biden has an irregular heartbeat, but it has not required any medication or other treatment. He also had his gallbladder removed in 2003.

A September article by a group of researchers in the Journal on Active Aging concluded that both Biden and Trump are “super-agers” and are likely to outlive their American contemporaries and maintain their health beyond the end of the next presidential term.

Some of Biden's White House predecessors left behind breadcrumbs about the dos and don'ts of demonstrating presidential vigor, said Edward Frantz, a presidential historian at the University of Indianapolis.

Reagan made sure the public saw him chopping wood and riding horses. Trump, after being diagnosed with the coronavirus, quickly returned to a busy campaign schedule — holding dozens of crowded rallies in battleground states in the final weeks of the campaign. Those events flouted coronavirus guidelines on social distancing, wearing masks and avoiding large gatherings.

In 1841, William Harrison, 68, attempted to show off his vigor by delivering a lengthy inaugural address without a coat or hat. Weeks later, Harrison, then the oldest president elected in U.S. history, developed a cold that turned into pneumonia that would kill him just a month into his presidency. It’s disputed whether Harrison’s illness was related to his inaugural address.