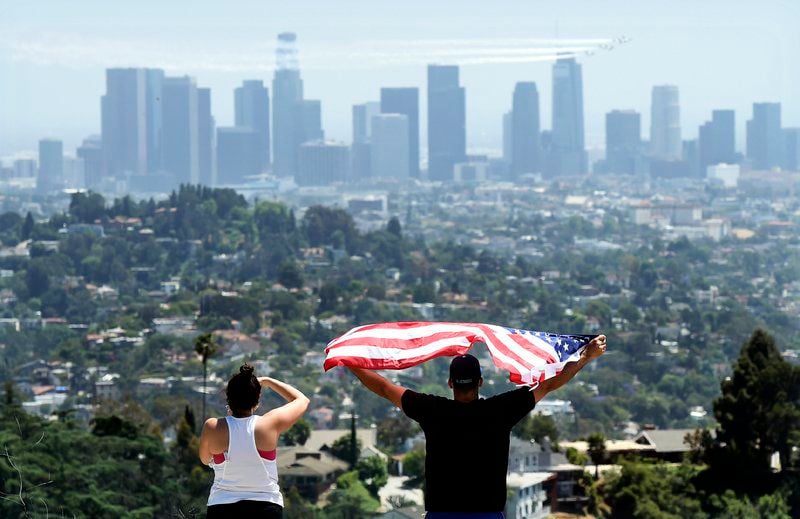 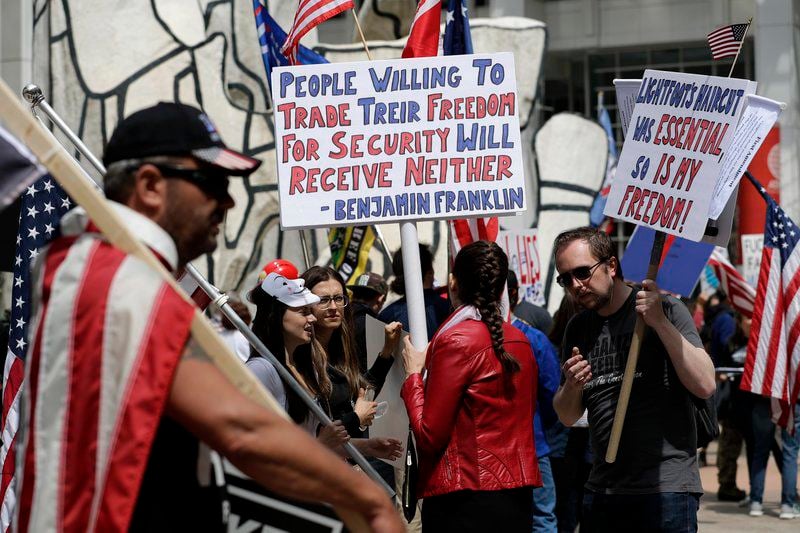 FILE - In this May 16, 2020, file photo, protesters holds a sign during a rally calling for the state to reopen the economy outside the Thompson Center in downtown Chicago. (AP Photo/Nam Y. Huh, File) 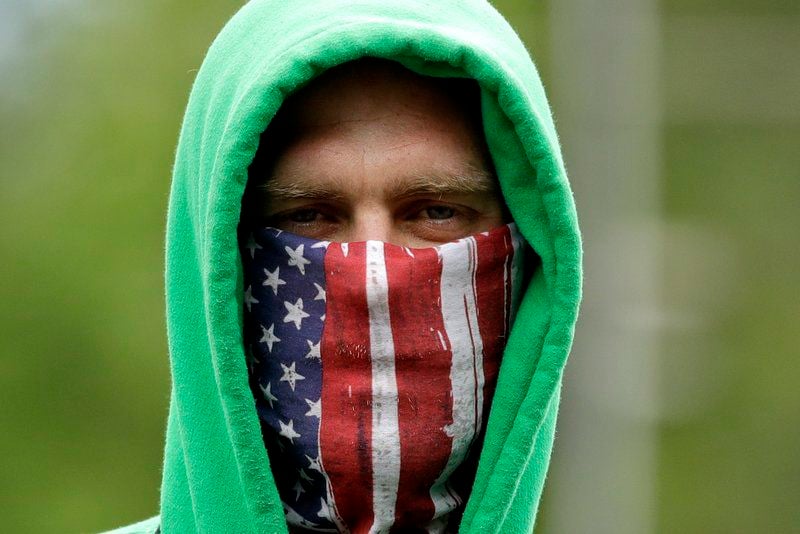 FILE - In this May 4, 2020, file photo, a man wears a mask as he waits in line outside the Warrensburg License Office in Warrensburg, Mo. (AP Photo/Charlie Riedel, File) 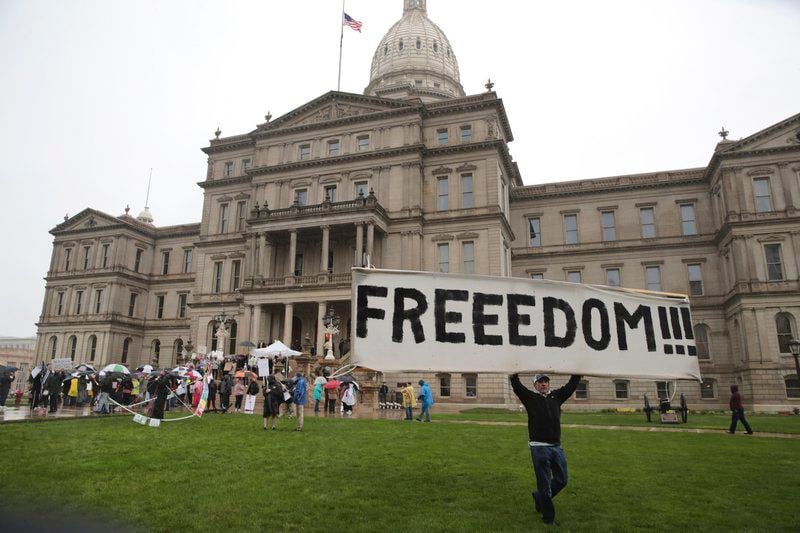 FILE - In this May 14, 2020, file photo, a protester carries a sign during a rally against Michigan's coronavirus stay-at-home order at the State Capitol in Lansing, Mich. (AP Photo/Paul Sancya, File) 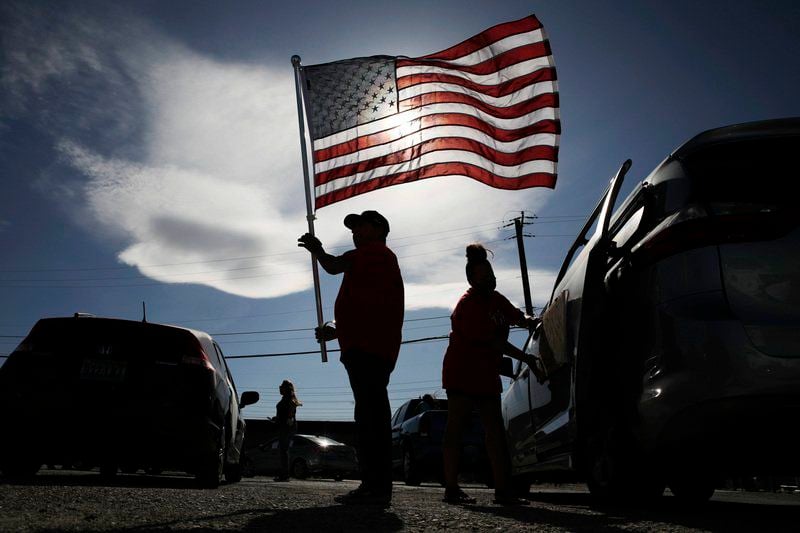 FILE - In this May 12, 2020, file photo, members of the Culinary union prepare before a car caravan rally in Las Vegas. The union is asking for casino companies to make their full safety guidelines and reopening plans public. (AP Photo/John Locher, File)

FILE - In this May 16, 2020, file photo, protesters holds a sign during a rally calling for the state to reopen the economy outside the Thompson Center in downtown Chicago. (AP Photo/Nam Y. Huh, File)

FILE - In this May 4, 2020, file photo, a man wears a mask as he waits in line outside the Warrensburg License Office in Warrensburg, Mo. (AP Photo/Charlie Riedel, File)

FILE - In this May 14, 2020, file photo, a protester carries a sign during a rally against Michigan's coronavirus stay-at-home order at the State Capitol in Lansing, Mich. (AP Photo/Paul Sancya, File)

FILE - In this May 12, 2020, file photo, members of the Culinary union prepare before a car caravan rally in Las Vegas. The union is asking for casino companies to make their full safety guidelines and reopening plans public. (AP Photo/John Locher, File)

We, the people. But individual rights. The common good. But don’t tread on me. Form a more perfect union and promote the general welfare. But secure the blessings of liberty to ourselves and our posterity.

From the moment the American republic was born right up until today, this has been its hallmark: Me and we — different flavors of freedom that compete but overlap — living together, but often at odds.

The history of the United States and the colonies that formed it has been a 413-year balancing act across an assortment of topics, priorities, passions and ambitions. Now, in the coronavirus era, that tug of war — is it about individuals, or the communities to which they belong? — is showing itself in fresh, high-stakes ways.

Last week, protesters massed at the foot of the Pennsylvania Capitol steps — most of them maskless — for the second time in a month to decry Gov. Tom Wolf and demand he “reopen” the state faster. It is one of many states where a vocal minority has criticized virus-related shutdowns for trampling individual rights.

“He who is brave is free,” read a sign carried by one Pennsylvania protester. “Selfish and proud,” said another, referring to the governor's statement that politicians advocating immediate reopening were “selfish.” “My body my choice,” said a sign at a rally in Texas, coopting an abortion-rights slogan to oppose mandatory mask rules.

“The pandemic is presenting this classic individual liberty-common good equation. And the ethos of different parts of the country about this is very, very different. And it’s pulling the country in all these different directions,” says Colin Woodard, author of “American Character: A History of the Epic Struggle Between Individual Liberty and the Common Good.”

Though polls show a majority of Americans still support some level of shutdown, the cries to reopen have grown in the past few weeks as job losses continue to mount. In Pennsylvania and across the country, the demonstrators' chorus has generally been: Don’t tell me how to live my life when I need to get out of my house and preserve my livelihood.

“They’re being told to stay home, wait it out. And that’s a really weird democratic message to get. And the only way to do it is to say, 'I trust the government,’” says Elspeth Wilson, an assistant professor of government at Franklin & Marshall College in Pennsylvania.

While the catalyst is an unprecedented pandemic, the collision of individual rights and the common good is as old as the republic itself: Where does one American’s right to move around in public without a mask end, and another American’s right to not be infected with a potentially fatal virus begin?

“This is economic paralysis by analysis for some people. And they’re afraid," says Steven Benko, an ethicist at Meredith College in North Carolina. "They feel devalued.”

Americans have long romanticized those who reject the system and take matters into their own hands — the outlaw, the cowboy, the rebel. Many American leaders have wrestled to reconcile that with “common good” principles that are generally needed to govern.

"Reagan did that better than anyone. He was the cowboy selling the shared American vision. That’s quite a contradiction,” Benko says.

Ronald Reagan’s crowning metaphor — the United States as the “city upon a hill” — was borrowed from the Puritans, whose traditions shaped the American ethos, including the compact that created the New World’s first English government. But Puritanism also asserted that hard work, a form of moral righteousness, heralded success and salvation.

Over time, and with other ingredients added as more groups came to American shores, a vague sense of shame became attached to the inability to be an individualist: If you couldn’t get along on your own, in the eyes of some, you were less of an American.

But is that kind of “rugged individualism,” as it came to be known, applicable in a 21st-century virus scenario where everything from food shopping to health care to package delivery requires a web of intricate, precise networks that form a common good?

Overlaid on this debate, too, is what some call an ignored truth: Individualism tends to favor groups that are in power, economically or socially. In short, doing what one wants is a lot easier when you have the means (health care, money, privilege) to deal with the impact it causes.

That’s particularly relevant when the direct impact of one’s individualism — in the form of virus-laden droplets — can ripple out to others.

“We fail to recognize how interdependent we really are,” says Lenette Azzi-Lessing, a clinical professor of social work at Boston University who studies economic disparity.

“The pandemic and dealing with it successfully does require cooperation. It also requires shared sacrifice. And that’s a very bitter pill for many Americans to swallow,” she says. “The pandemic is revealing that our fates are intertwined, that the person in front of us in line on the grocery store, if he or she doesn’t have access to good health care, that that’s going to have an effect on our health.”

U.S. history has sometimes revealed that in times of upheaval — the Great Depression, World War II, even the founding of the nation itself — common good becomes a dominant American gene for a time. Will that happen here? Or is the fragmentation of politics and economics and social media too powerful to allow that?

“The status quo is individualism. And then when we get to these crisis periods, it changes,” says Anthony DiMaggio, a political scientist at Lehigh University who is researching groups that advocate reopening. ”All these rules go out the window and people are willing to jettison all these ways of looking at the world.”

So is it, as Ayn Rand once told an interviewer, that “each man must live as an end in himself, and follow his own rational self-interest?” Or is it more like Woody Guthrie, paraphrasing Tom Joad in “The Grapes of Wrath”: “Everybody might be just one big soul — well, it looks that way to me.”

More likely, in a nation stitched together by a high-wire act of political compromise, it's somewhere in between — a new path that Americans must chart so they can continue their four-century experiment through unprecedented times. Yet again.

Ted Anthony, director of digital innovation for The Associated Press, has been writing about American culture since 1990. Follow him on Twitter at http://twitter.com/anthonyted.