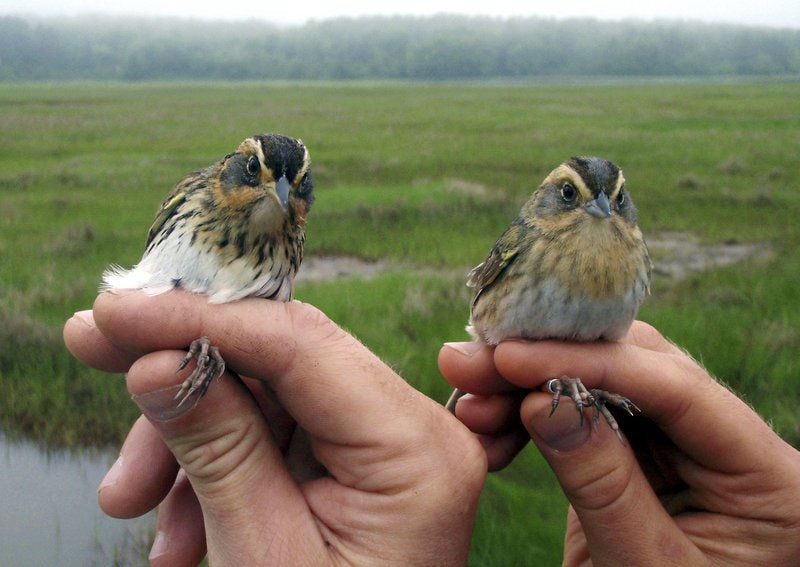 Scientists say the population of saltmarsh sparrows, which live in coastal areas from Maine to Virginia, is declining. (Kate Ruskin/Saltmarsh Habitat and Avian Research Program via AP) 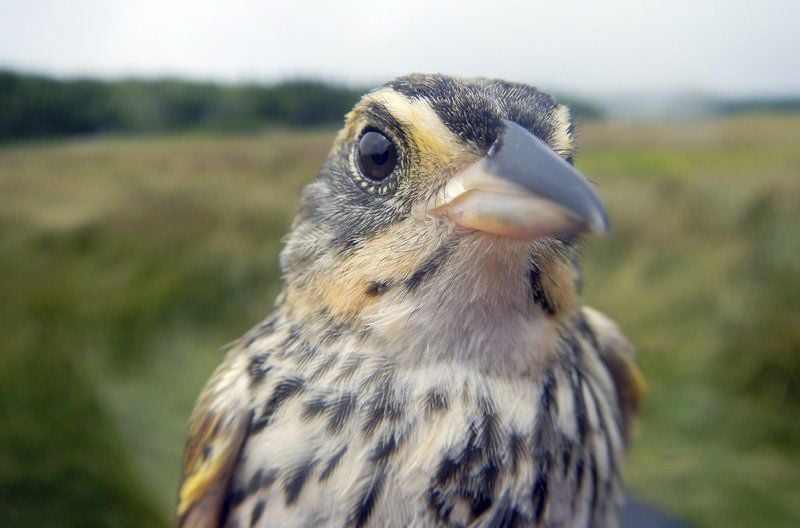 This July 2015 photo shows a saltmarsh sparrow in its coastal habitat. Scientists say the population of the birds, which live in coastal areas from Maine to Virginia, is declining.

Scientists say the population of saltmarsh sparrows, which live in coastal areas from Maine to Virginia, is declining. (Kate Ruskin/Saltmarsh Habitat and Avian Research Program via AP)

This July 2015 photo shows a saltmarsh sparrow in its coastal habitat. Scientists say the population of the birds, which live in coastal areas from Maine to Virginia, is declining.

The saltmarsh sparrow is disappearing from its home on the East Coast and could be headed for extinction in as little as 50 years, say scientists whose work could help protect the little birds.

The sparrows, which weigh about half an ounce, live in coastal areas from Maine to Virginia during the breeding season and migrate farther south in the winter. Researchers with a group of universities have been tracking them for several years and reported this month that eight out of every 10 of the birds has disappeared in the past 15 years.

University of Maine professor Brian Olsen, one of the researchers studying the sparrow, said their population has dropped about 9 percent annually since 1998.

The birds still number in the tens of thousands. Massachusetts Audubon says these sparrows rely on the state's salt marshes for a considerable portion of their global breeding habitat. The bird's population is relatively stable in the Great Marsh, which stretches from Gloucester to the New Hampshire, according to MassAudubon's bredding bird atlases.

Olsen said coastal construction of structures such as roads and railways has restricted the flow of the tides to salt marshes and interfered with the birds' habitat. Sea-level rise has also hurt the sparrows, he said.

"We're watching a species in incredibly rapid decline," Olsen said. "The saltmarsh sparrow is especially sensitive to changes in the tidal marsh."

There are about 53,000 of the sparrows in the U.S., the only country where they live. Olsen said their decline is the most severe in New England, where they have disappeared at a more extreme rate than any other tidal marsh bird.

Saltmarsh sparrows are not afforded special protections or protective status in the U.S. But the International Union for Conservation of Nature's Red List of Threatened Species lists the sparrow as "vulnerable."

The U.S. Fish and Wildlife Service has asked Olsen and the other researchers studying the sparrow to put together information about the bird so it can make a determination about whether it should be considered for protection.

The other researchers are from the universities of Connecticut, New Hampshire and Delaware and the State University of New York College of Environmental Science and Forestry. Their work on the sparrow is part of a project called the Saltmarsh Habitat & Avian Research Program.

Times staff contributed to this story.