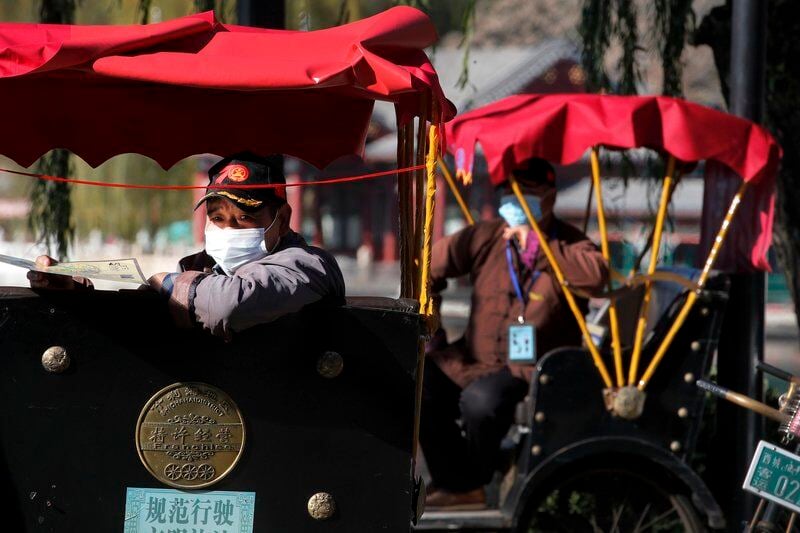 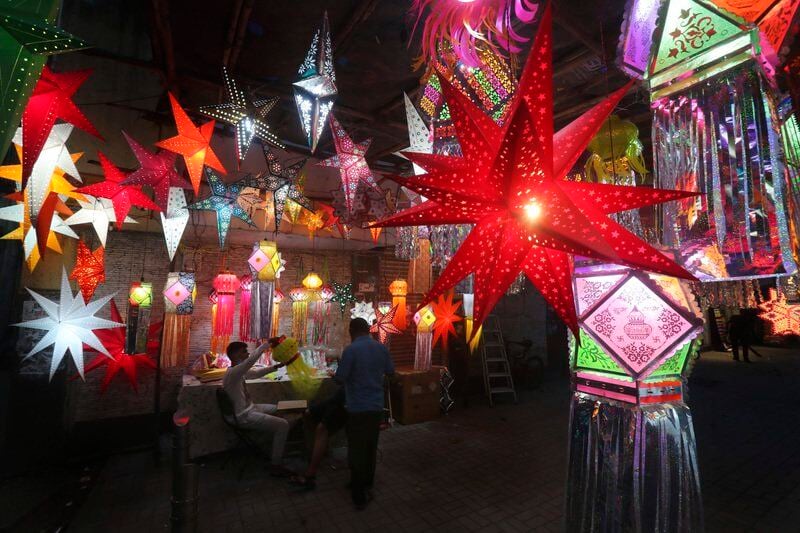 People shop for lanterns at a roadside stall ahead of Diwali, the Hindu festival of lights, in Mumbai, India, Saturday, Nov. 7, 2020. Diwali will be celebrated on Nov. 14. (AP Photo/Rafiq Maqbool) 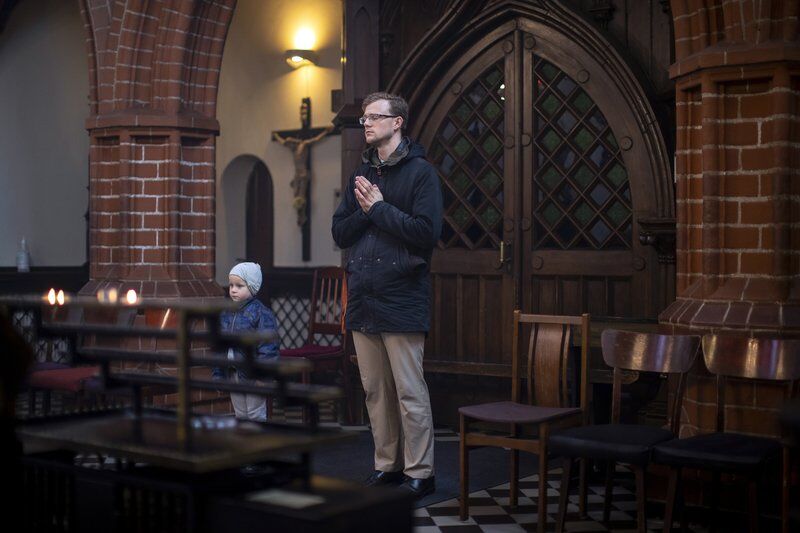 A father and his son pray during the Sunday Mass at the Roman Catholic church of St. Anne in Vilnius, Lithuania, Sunday, Nov. 8, 2020. The entire country has been put under a three-week nationwide lockdown from Nov. 7 to Nov, 29, putting restrictions on social life and economic activities in order to stem the spread of the coronavirus, but churches are open for all worship. (AP Photo/Mindaugas Kulbis) 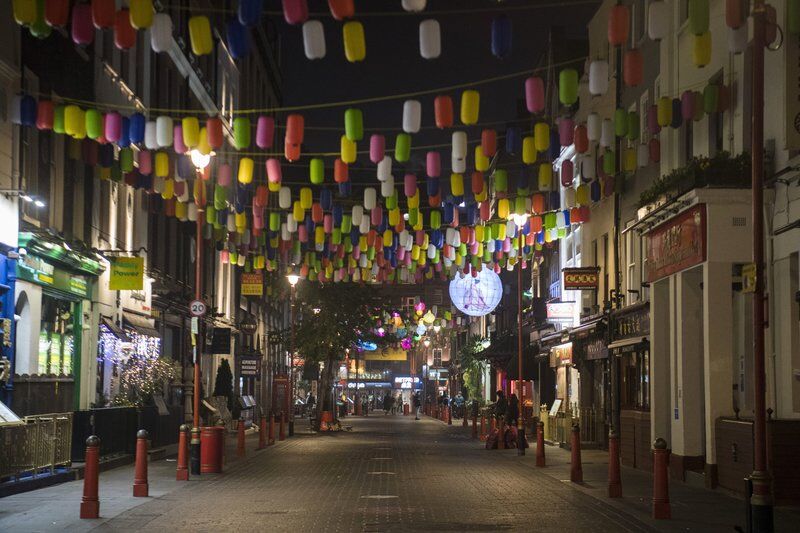 A street is quiet in Chinatown in the central area of London, Saturday, Nov. 7, 2020, on the third day of a four week national lockdown for England to combat the spread of Covid-19. Britain's lockdown started Thursday, shuttering restaurants, hairdressers and clothing stores until at least Dec. 2. (Kirsty O'Connor/PA via AP) 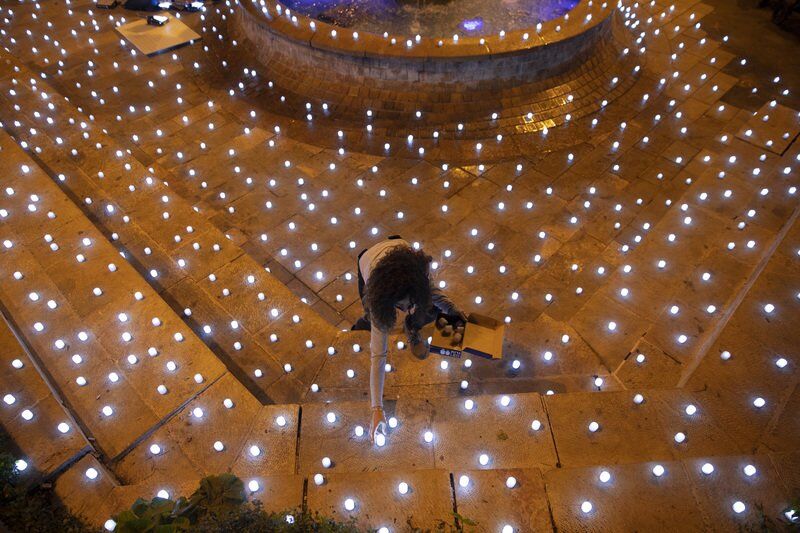 An activist turns on LED candles at a memorial for Israel's victims of COVID-19, in Jerusalem, Sunday, Nov. 8, 2020. (AP Photo/Oded Balilty) 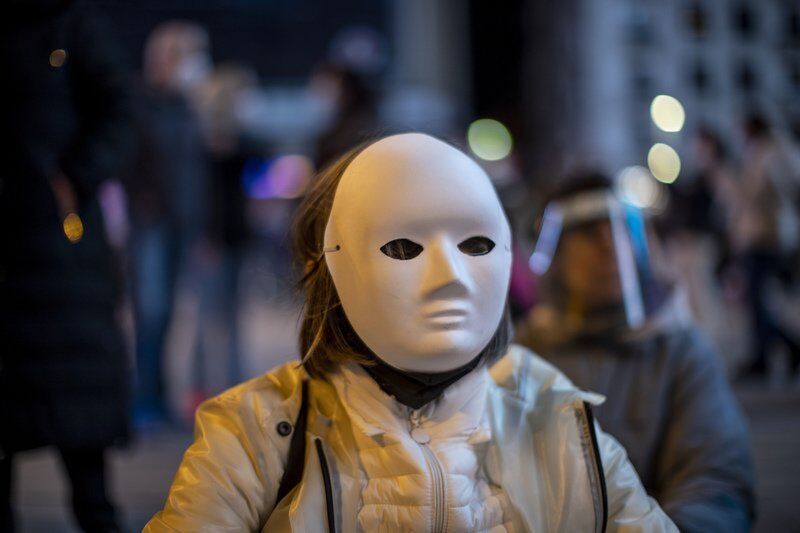 A woman wearing a face mask protests in support of coronavirus deniers and restrictions by the government in downtown Madrid, Spain, Saturday, Nov. 7, 2020. (AP Photo/Manu Fernandez)

People shop for lanterns at a roadside stall ahead of Diwali, the Hindu festival of lights, in Mumbai, India, Saturday, Nov. 7, 2020. Diwali will be celebrated on Nov. 14. (AP Photo/Rafiq Maqbool)

A father and his son pray during the Sunday Mass at the Roman Catholic church of St. Anne in Vilnius, Lithuania, Sunday, Nov. 8, 2020. The entire country has been put under a three-week nationwide lockdown from Nov. 7 to Nov, 29, putting restrictions on social life and economic activities in order to stem the spread of the coronavirus, but churches are open for all worship. (AP Photo/Mindaugas Kulbis)

A street is quiet in Chinatown in the central area of London, Saturday, Nov. 7, 2020, on the third day of a four week national lockdown for England to combat the spread of Covid-19. Britain's lockdown started Thursday, shuttering restaurants, hairdressers and clothing stores until at least Dec. 2. (Kirsty O'Connor/PA via AP)

An activist turns on LED candles at a memorial for Israel's victims of COVID-19, in Jerusalem, Sunday, Nov. 8, 2020. (AP Photo/Oded Balilty)

A woman wearing a face mask protests in support of coronavirus deniers and restrictions by the government in downtown Madrid, Spain, Saturday, Nov. 7, 2020. (AP Photo/Manu Fernandez)

BOSTON — The U.S. has set another record for daily number of coronavirus cases.

The country reported more than 126,000 positive cases and more than 1,000 deaths from COVID-19 on Saturday, according to the most recent data from Johns Hopkins University.

It marked the fourth day in a row that new cases topped more than 100,000 as the country has broken its own record for daily cases with nearly every passing day this week.

The virus death toll is also rising in the country.

The seven-day rolling average for daily new deaths rose over the past two weeks from 801 on Oct. 24 to 930 on Nov. 7, the university said.

There have been more than 9.8 million cases and more than 237,000 deaths from the virus in the U.S. since the pandemic started.

Globally, there have been nearly 50 million positive cases and more than 1.2 million deaths from COVID-19.

HERE’S WHAT ELSE IS HAPPENING:

JERUSALEM — Israel has allowed most retail shops to reopen for the first time in nearly two months, in the latest phase of its exit from a second coronavirus lockdown.

Under the new rules, shops can accept up to four customers at a time, and indoor shopping malls remain closed.

The country has moved more cautiously this time– gradually opening preschools and elementary schools and some offices in recent weeks. The dual lockdowns have hit small businesses especially hard.

Rina Shapira, a shopper in a Jerusalem bookshop, said the plight of businesses is heartbreaking. “Without an economy, there is also no health,” she said.

ROME — More than 200 migrants who reached a tiny Italian island were in mandatory preventative quarantine Sunday aboard a ferry that has been pressed into service as part of the country’s measures against COVID-19 spread.

The 238 migrants are some of about 2,200 who arrived on Lampedusa island in the past week, Italian news reports said. Among them are Tunisians who arrived in small boats directly on the island from their homeland, while some of the others were spotted by an Italian border patrol vessel, which then brought them to shore.

With tourism practically flattened by the pandemic, Italy earlier this year started using empty passenger ferries that normally would ply the waters between Sicily and the mainland to instead house migrants to ensure they don’t bring infection when they are later transferred to shelters in Italy.

While earlier in the pandemic some clusters of infections were found in migrant residences, in past weeks most of the new cases in a resurgence of COVID-19 infections have been traced to transmission within Italian households, according to health experts.

RENO, Nev. — A rural Nevada church is headed back to the U.S. Supreme Court in a second attempt to overturn the state’s 50-person cap on attendance at religious gatherings.

A new petition filed Thursday asks the justices to consider the challenge of Nevada’s COVID-19 restrictions as a test case for others brought by churches across the country arguing their religious freedoms are being violated.

Calvary Chapel argues the 50-person cap is an unconstitutional violation of religious freedoms, partly because casinos and other businesses are allowed to operate at 50% of capacity.

Other secular businesses allowed to operate at half capacity include restaurants, gyms, hair salons and bowling alleys.

A federal appeals court has scheduled oral arguments next month on the Nevada church’s appeal of a U.S. judge’s ruling in Reno upholding the state policy.

NEW YORK — Students attending college at one of New York’s public universities in the spring will have to quarantine at home for a week first and be tested for COVID-19, at home or on campus.

The rules are part of new guidance for the spring semester issued by the State University of New York on Sunday.

Classes will start later than usual, on Feb. 1, and there will be no spring break. And with big gatherings still not allowed, graduation plans for the Class of 2021 are shaping up once again to be scaled-back or virtual ceremonies.

NEW DELHI — India has reported 45,674 new coronavirus infections, with the capital coping with a sharp surge of nearly 7,000 cases a day this past week.

India’s tally of confirmed cases — currently the second largest in the world behind the United States — has exceeded 8.5 million. The Health Ministry on Sunday also reported 559 deaths in the past 24 hours, raising total fatalities to 126,121.

India has seen an overall steady dip in new cases after touching nearly 100,000 a day in mid-September.

However, the tally in New Delhi continues to hover at around 7,000 a day after dropping to nearly 1,000 in September. The capital also reported 79 deaths in the past 24 hours, the most since June.

Delhi state Health Minister Satyendar Jain said that apart from aggressive contact tracing, targeted testing in shopping areas and other busy locations also has started. And authorities are reaching out to people through mobile testing vans.

The government has warned that the situation could worsen due to festival shopping crowds, coupled with the onset of winter and high air pollution levels.

The state reported 604 cases, the highest in a single day since Oct. 25, when 526 cases were tallied, the Anchorage Daily News reported.

The Department of Health and Social Services says there were no new deaths from the virus. The state has had 19,306 cases and 79 deaths since the coronavirus hit.

The Daily News reports that 95 people were currently hospitalized with the virus in Alaska as of Saturday, slightly down from Friday’s record of 97 hospitalizations. Another 10 hospital patients were suspected of having COVID-19, according to state data.

Officials say there are 1,287 additional cases, a one-day record that was the same number reported Friday. But officials on Saturday also said that 10 of the cases reported Friday had turned out to be duplicates or not lab-confirmed. With those adjustments and the latest reported cases, the statewide case total reached 53,671 with 1,104 deaths.

State officials warned Thursday that new records would be set over the coming weeks as the rate of spread remains high.

WICHITA, Kan. — A council member in Kansas’ largest city has tested positive for the coronavirus, forcing the mayor and other council members to quarantine for about two weeks.

“The City continues to strongly urge all Wichita residents and City employees to practice safe social distancing whenever possible, to wear face masks when distancing isn’t possible, limit public exposure and to wash hands frequently,” the City of Wichita tweeted.

The Wichita Eagle reports that Johnson said he had a cough Thursday that worsened Friday, so he went to be tested. He received his results Saturday morning.

The state reported 1,562 new cases on Friday. The state’s totals increased to 108,746 cases and 1,850 deaths. State COVID-19 response Director Caleb Cage said Friday the case increase in Nevada is a surge in cases.

According to Johns Hopkins University data analyzed by The Associated Press, seven-day rolling averages for daily new cases and daily new deaths in Nevada increased over the last two weeks as the average for COVID-19 testing positivity dropped.

HILLSBORO, Ore. — The Oregon Occupational Safety and Health Administration is investigating reports that a circuit court judge is endangering the health of workers and jurors by ignoring a statewide mask mandate in his courtroom.

The Oregonian/OregonianLive reports in a story on Saturday that Washington County Circuit Judge Charles Bailey describes the mask mandate as a “nanny state” requirement. He doesn’t wear a face covering and isn’t requiring others to do so in his Hillsboro courtroom. Bailey told attorneys and jurors in the Oct. 29 recording of the proceedings that it was up to them whether they wanted to wear a mask. The incident occurred as coronavirus infections surge in the state.

OKLAHOMA CITY — The number of newly reported coronavirus cases in Oklahoma on Saturday more than doubled the previous one-day record, but the state Department of Health said a bureaucratic backlog and duplicate reporting partially account for the steep increase.

There were 4,741 new cases, bringing the total to 136,492 since the pandemic began, the department said. The previous one-day record of 2,101 new cases was recorded Thursday as cases in the state have surged in recent weeks.

“We have reason to believe that our normal case count would have continued on an upward trajectory without the backlog and duplication,” which is due to a transition from a manual to electronic reporting system, according to a health department statement. Officials said they were not sure how many cases were recorded twice but were investigating.

“Oklahomans pulled together back in April so we could safely reopen our economy, and I am asking for that same unified effort once again to slow the spread of this virus and keep Oklahomans safe,” Stitt said.

That tops the 37,809 cases on Friday. In Lombardy, one quarter of the coronavirus tests came back positive for a daily total of nearly 11,500.

Lombardy is one of four regions designated a “red zone,” with a partial lockdown in effect since Friday.

Hospitalizations continue to rise, with 1,104 more people hospitalized on Saturday and 119 more in intensive care.

There are more than 862,000 total confirmed cases in Italy. Deaths nationwide rose by 425 for a confirmed total of 41,063, sixth highest in the world.