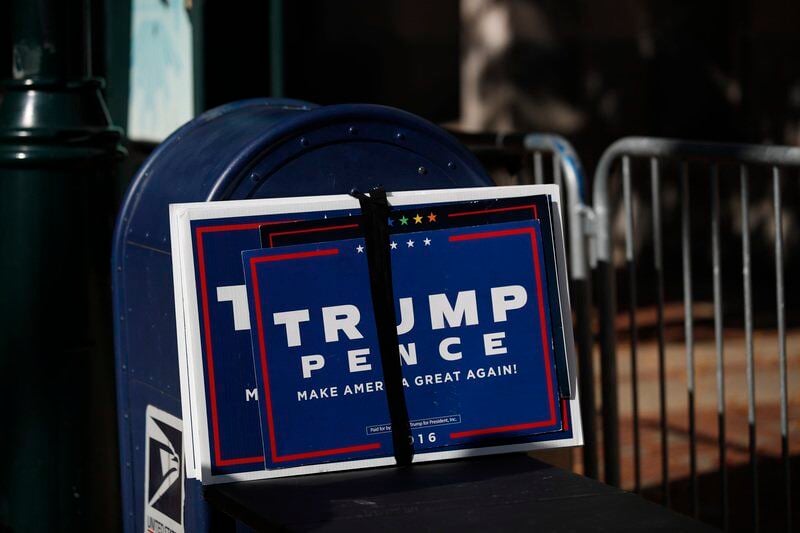 Trump signs sit beside a mailbox as supporters of President Donald Trump set up to protest outside the Pennsylvania Convention Center, where vote counting continues, in Philadelphia, Monday, Nov. 9, 2020, two days after the 2020 election was called for Democrat Joe Biden.(Rebecca Blackwell/AP photo) 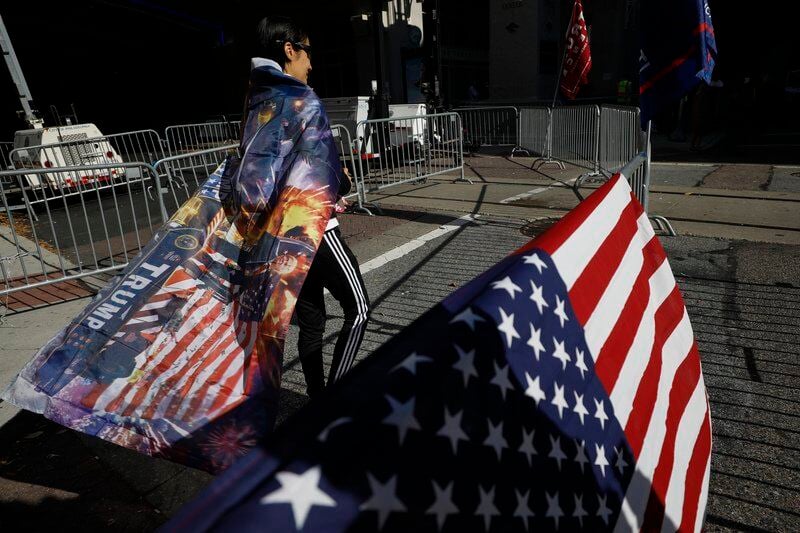 A woman wears a Trump flag as a cape as supporters of President Donald Trump protest outside the Pennsylvania Convention Center, where vote counting continues, in Philadelphia, Monday, Nov. 9, 2020, two days after the 2020 election was called for Democrat Joe Biden. (Rebecca Blackwell/AP photo)

Trump signs sit beside a mailbox as supporters of President Donald Trump set up to protest outside the Pennsylvania Convention Center, where vote counting continues, in Philadelphia, Monday, Nov. 9, 2020, two days after the 2020 election was called for Democrat Joe Biden.(Rebecca Blackwell/AP photo)

A woman wears a Trump flag as a cape as supporters of President Donald Trump protest outside the Pennsylvania Convention Center, where vote counting continues, in Philadelphia, Monday, Nov. 9, 2020, two days after the 2020 election was called for Democrat Joe Biden. (Rebecca Blackwell/AP photo)

Republican surrogates for President Donald Trump resumed their legal fight Monday to try to stop the vote count in key battleground states, including Pennsylvania and Michigan, but faced long odds given the Electoral College tally and recent court rulings that found no evidence of widespread vote fraud.

While some Republican state officials invoked the Trump mantra that only “legal votes” should be counted, others emerged to counter the campaign narrative and urge voters, and perhaps the president, to support the results.

“The process has not failed our country in more than 200 years, and it is not going to fail our country this year,” said Republican Sen. Susan Collins of Maine, who won her reelection bid and has congratulated Biden on his victory.

Still, Trump lawyers soldiered on six days after the election, just as personal counsel Rudy Giuliani had promised they would during a surreal weekend press conference outside a landscaping storefront in northeast Philadelphia.

Giuliani denounced the city’s vote count — which fell about 4-1 for former Vice President Joe Biden, giving the Democrat the win Saturday in both Pennsylvania and the U.S. election — as “extremely troubling.”

Across the country, Republicans have complained about problems with the signatures, secrecy envelopes and postal marks on ballots, the inability of their poll watchers to scrutinize them and the extensions granted for mail-in ballots to arrive.

However, judges across the country largely rejected the Republican challenges over the past week as the campaign sought to interrupt the vote count as it leaned toward Biden. Trump has yet to concede the election, even as Biden claimed victory and got to work on his transition plans.

At the U.S. Supreme Court, 10 Republican state attorney generals filed an amicus brief Monday to support a challenge to Pennsylvania's decision to count mail-in ballots that arrived through Friday. The Pennsylvania Supreme Court had unanimously upheld the three-day extension set by Democratic state officials concerned about Postal Service delays and the COVID-19 pandemic. The attorneys general say the court usurped a power reserved for state lawmakers.

The U.S. Supreme Court had declined to fast-track the challenge, but the vote was 4-4, and three justices expressed reservations. Republicans now hope to try again with new Supreme Court Justice Amy Coney Barrett on the court.

“The decision provided a window of time after Election Day, when the preliminary results were announced, in which unscrupulous actors could attempt to influence a close Presidential election,” the Republican Attorneys General Association said in the brief.

And in Arizona, the Trump campaign asked in a lawsuit filed Saturday for the right to inspect thousands of in-person ballots filled out on Election Day in the Phoenix area, alleging that poll workers had mishandled them.

In Georgia, where Biden has a small lead over Trump but the race remains too early to call, a state election official pledged Monday to investigate any ballot problems they find.

“When the margins are this tight, every little thing matters,” said Gabriel Sterling, who led the state’s implementation of a new voting system for the secretary of state’s office.

Still, he expressed frustration over efforts to shake the public’s faith in the electoral system.

“The facts are the facts, regardless of outcomes,” Sterling said.