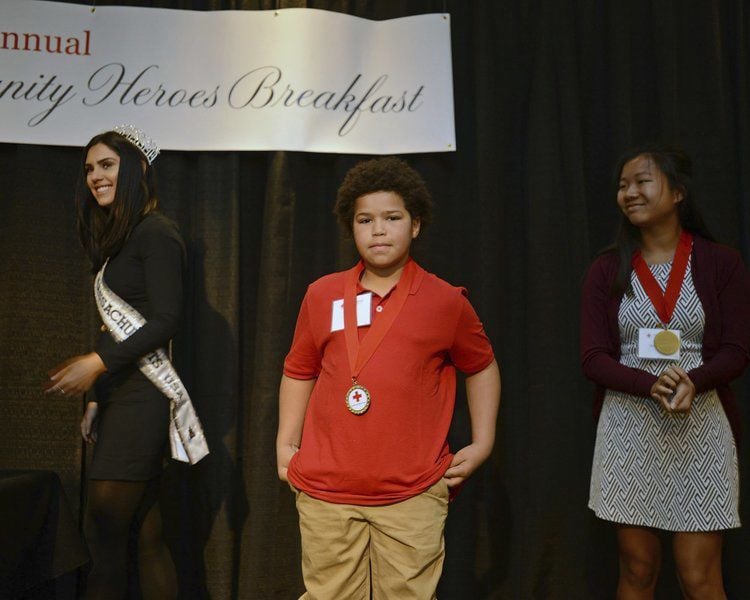 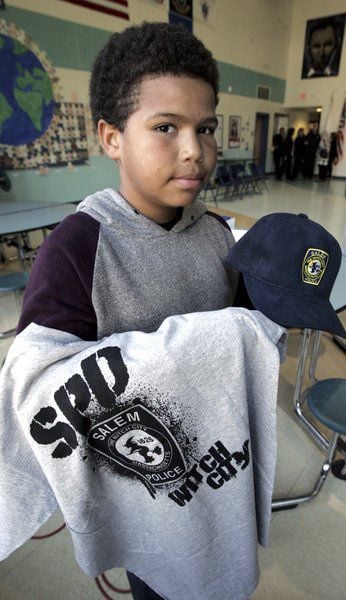 KEN YUSZKUS/Staff photo. Jaydon Dancy, a Carlton School student, was honored by the mayor, police, and other dignitaries in a schoolwide assembly for trying to save a man from drowning over the summer. He received not only the Tshirt and hat pictured, but other items as well. 10/11/16 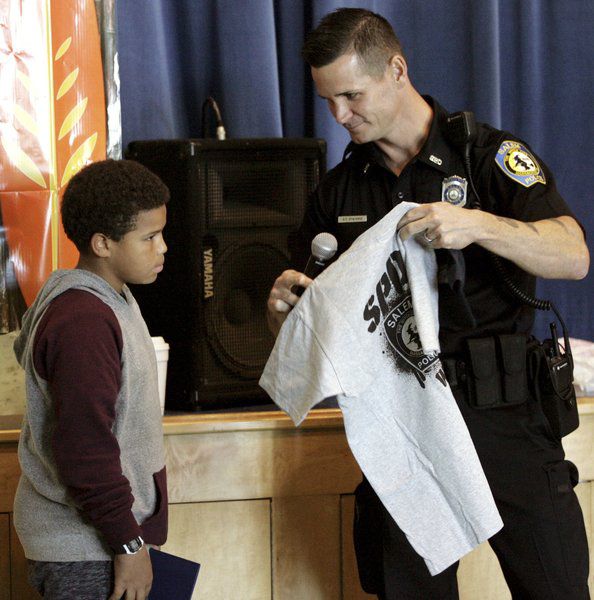 KEN YUSZKUS/Staff photo. Jaydon Dancy, left, recives a Tshirt from Salem Police Officer Bryan St. Pierre. Jaydon is a Carlton School student, who was honored by the mayor, police, and other dignitaries in a schoolwide assembly for trying to save a man from drowning over the summer. He received not only the Tshirt and hat pictured, but other items as well. 10/11/16 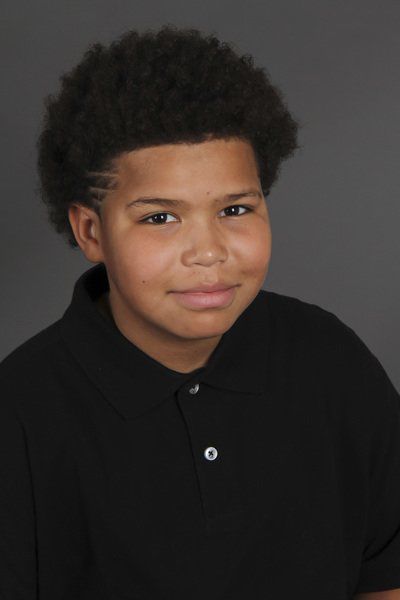 KEN YUSZKUS/Staff photo. Jaydon Dancy, a Carlton School student, was honored by the mayor, police, and other dignitaries in a schoolwide assembly for trying to save a man from drowning over the summer. He received not only the Tshirt and hat pictured, but other items as well. 10/11/16

KEN YUSZKUS/Staff photo. Jaydon Dancy, left, recives a Tshirt from Salem Police Officer Bryan St. Pierre. Jaydon is a Carlton School student, who was honored by the mayor, police, and other dignitaries in a schoolwide assembly for trying to save a man from drowning over the summer. He received not only the Tshirt and hat pictured, but other items as well. 10/11/16

SALEM — This past spring, Jaydon Dancy of Salem was hailed as a Hometown Hero by the Red Cross for coming to the aid of a kayaker in distress.

In October, the Carlton Innovation Elementary School and city officials, state lawmakers, police and fire officials honored him in a schoolwide assembly.

Now the Salem community is mourning the loss of the "very special" fifth-grader who was killed Friday night after he was struck by a commuter train near Lawrence Street just after 8 p.m.

Salem Mayor Kim Driscoll announced the "sad news" in a call to the community in both English and Spanish.

"Our community has suffered a tragic loss with the death of Jaydon Dancy," Driscoll announced, "a fifth-grade student at the Carlton Innovation Elementary School. He was tragically killed during a train accident on Friday."

Driscoll invited the community to grieve together on Sunday, June 11, from 6 to 8 p.m., at the Carlton School on Skerry Street, where teachers, staff and grief counselors will be on hand. Additional counselors will also be at schools starting Monday, she said.

The city has also established a fund at Salem Five Bank to assist the Dancy family. Donations in the form of check or money order can be sent to the Jaydon Dancy Fund, c/o Salem Five, 210 Essex St., Salem, MA 01970. An online donation portal is also being set up.

Earlier Saturday, Driscoll posted a message on Facebook, before Jaydon's identity was released, acknowledging the incident.

"There is no more profoundly sorrowful event than the accidental death of a child," she wrote. "He was loved and respected and our memories of him will be of a bright and engaging young man... We will pull together to support the family, the Carlton School community, the other students who were present, and all in Salem who are struggling with this terrible loss."

"This young man was very special," Driscoll added, "and we are heartsick by his loss. Please keep his family in your prayers."

“Our hearts and prayers go out to Jaydon’s parents and his siblings during this difficult time," said Superintendent Margarita Ruiz, in a statement. "Jaydon was a bright, inquisitive fifth-grader at the Carlton Innovation School. Our entire school community and city mourn the loss of this child."

Hailed as a hero

Jaydon was hailed as a youth hero after an incident last August near Palmer Cove Yacht Club just off Leach Street. He was fishing with a friend when he saw a man had fallen out of his kayak into the ocean. When the man didn’t respond to Jaydon’s calls from land, the boy, then 10, swam out and brought him to shore, where others attempted CPR. The unconscious kayaker did not survive, but Jaydon was lauded for his selfless act.

In what was a surprise to the boy, his entire school, plus Jaydon's parents and older brother, helped honor him last fall. State Rep. Paul Tucker, state Sen. Joan Lovely, Driscoll, and others were in attendance. Jaydon received a resolution from the Statehouse, and Salem police also gave him a shirt, police badge and hat.

Jaydon's father, Ray Dancy, said at the time he was very proud of his son.

"He goes, 'Dad, I was just doing what I'm told,'" the elder Dancy said at the time, adding that he praised him. "You don't know how much that means to help someone in distress."

A message was left on the elder Dancy's phone seeking further comment.

Tucker said Saturday he was heartsick. He had only met the boy that day in October.

"It was a great day for Jaydon and the school," said Tucker, who said the students were happy to honor him. "It was just a special feeling everyone had for him."

Those reaching out to Tucker described the boy as "sweet and special."

Spokeswoman Carrie Kimball Monahan said the boy was hit while he was crossing the tracks, trying to retrieve his bicycle.

"The boy was gathered with a group of other boys at a nearby park. According to the witnesses, the boy was crossing the tracks to retrieve his bicycle," Kimball Monahan said in a brief statement.

"An outbound train passed at 8:04 and then an inbound train went by about a minute later. Investigators believe that the boy was not aware of the second train. It appears to be a tragic accident and no foul play is suspected," she said.

The accident occurred near 40 Lawrence St. at approximately 8:05 p.m.

"This is an unspeakable loss for his family, his friends and the community," District Attorney Jonathan Blodgett said. "Words cannot properly express the magnitude of this tragedy. We extend our deepest sympathies to his family and friends."

In addition to Salem police, firefighters and EMS, the MBTA Transit Police also responded to the scene.

Salem police Capt. Conrad Prosniewski said while Salem officers responded, the accident was being investigated by transit police. Prosniewski said he could not say how the boy got on the tracks, but he noted fencing in the area had improved from when he was young.

"Kids will be kids, they manage to get on somehow," he said.

Shana Thompson, a mother of two, lives at the corner of Jefferson Avenue and Lawrence Street and she said she heard the train screeching to a halt and the rush of emergency vehicles.

"Basically, I heard the train screeching as it was stopping," Thompson said.

It was a sound she was not accustomed to, as the trains do not stop like that in her neighborhood. About 15 seconds later, she said she saw emergency vehicles speeding down the street.

"It's just a sad situation," Thompson said. "I've lived on the street for 30 years, never have I seen such a devastating thing."

Transit police confirmed the boy was struck on the inbound track and that he died as a result of his injuries.

"There are no adequate words to aptly convey the utter tragic event this is. TPD detectives along with representatives of the Essex County DA's office are actively investigating the facts and circumstances surrounding the incident. We ask that you respect the victim's family's privacy at this time," the statement said.

Shortly after the accident occurred, Salem police had confirmed a pedestrian was hit by a commuter train near Friendship Lane, which runs perpendicular to Lawrence Street northeast of Salem Woods and dead-ends at the rail line.

Staff writer Ethan Forman can be reached at 978-338-2673, by email at eforman@salemnews.com or on Twitter at @DanverSalemNews.