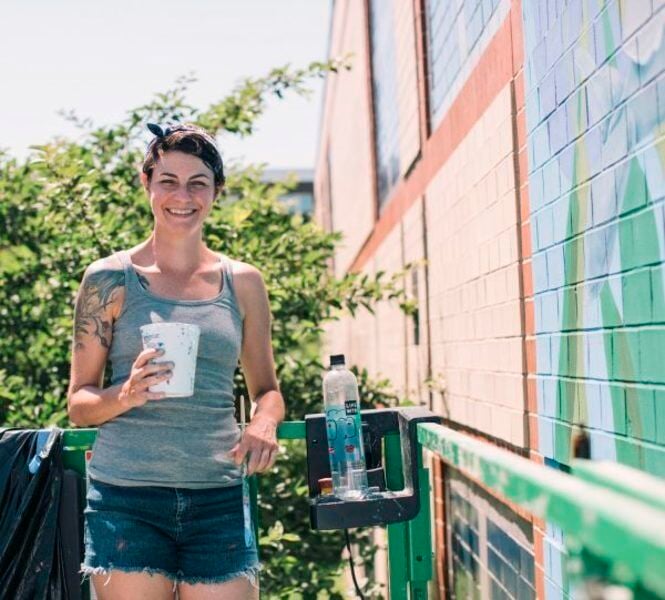 Sophy Tuttle is the environmental installation artist for the Goetemann Artist Residency program of the Rocky Neck Art Colony. 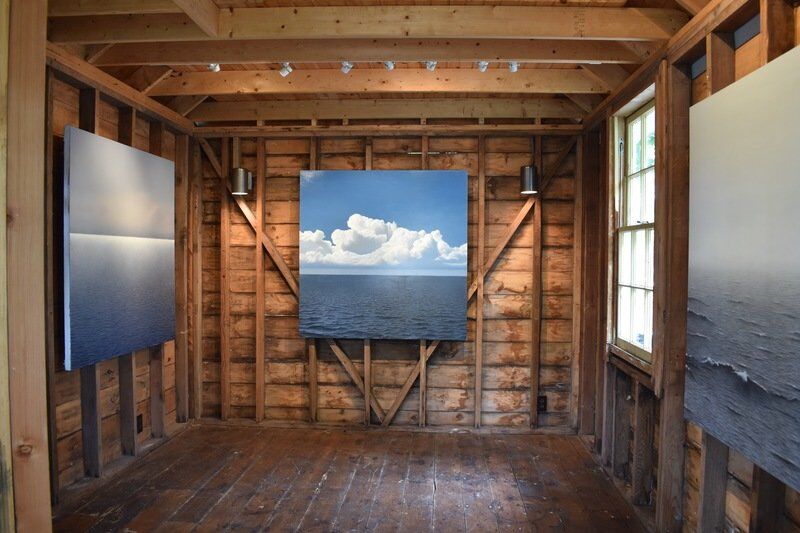 These new works by Adin Murray are on view at the SHED, an off-site space of Gloucester's Jane Deering Gallery. 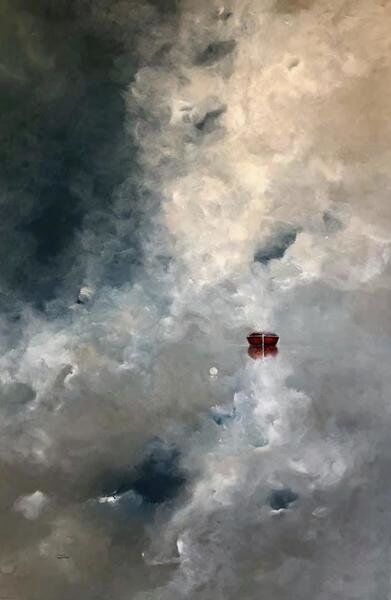 Regina Piantedosi, who previously was part of the Rocky Neck Art Colony, is September's featured artist at Local Colors on Gloucester's Main Street. 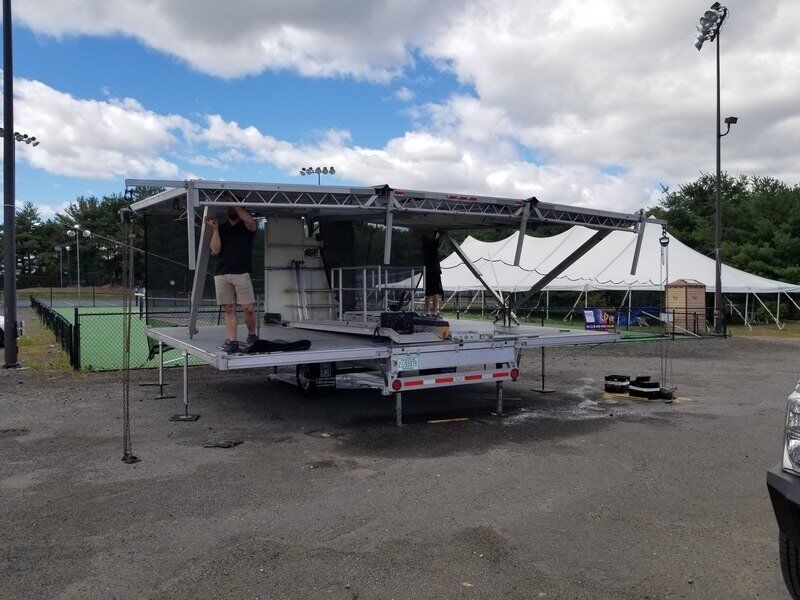 The outdoor stage is coming down at the Manchester Athletic Club, where the drive-in music series has been shut down due to state COVID-19 guidelines.

Sophy Tuttle is the environmental installation artist for the Goetemann Artist Residency program of the Rocky Neck Art Colony.

These new works by Adin Murray are on view at the SHED, an off-site space of Gloucester's Jane Deering Gallery.

Regina Piantedosi, who previously was part of the Rocky Neck Art Colony, is September's featured artist at Local Colors on Gloucester's Main Street.

The outdoor stage is coming down at the Manchester Athletic Club, where the drive-in music series has been shut down due to state COVID-19 guidelines.

Much of the Goetemann Artist Residency program of the Rocky Neck Art Colony was canceled due to the pandemic. However, its environmental installation artist is moving forward, and the public is invited to two events this month.

Sophy Tuttle is the featured artist in this segment of the program, now in its 16th year. Usually, there are four artists-in-residence over the summer months, followed by the environmental installation artist.

In her project, Tuttle will paint on site at the nearby Ocean Alliance on Rocky Neck. She will create a mural on the repurposed shipping container that houses Ocean Alliance's Robotics Club.

The first talk will be a meet-the-artist Zoom event on Wednesday, Sept. 9, at 4 p.m., when the artist will talk about her plans.

Then on Thursday, Sept. 29, at 4 p.m., a talk and the unveiling of her project will take place at Ocean Alliance, 32 Horton St., Gloucester, with visitors required to wear masks and to maintain social distancing. This second event will also be available via Zoom.

Tuttle, born in England, received her fine arts degree in illustration from Rhode Island School of Design in 2008 and a Master of Fine Arts in interdisciplinary art from the University of Hartford Art School in 2019. She currently resides in Massachusetts.

"I always begin with a certain genre of questioning. For example, we have relied on the idea of Aristotle’s hierarchy of species to place ourselves above all others in every decision we make. What would it look like if we inverted this hierarchy? In this vein, each piece that I produce is a catalyst for conversation, collaboration and activism," according to an artist statement.

Information on Zoom access will be posted on the Rocky Neck Art Colony website at rockyneckartcolony.org/residency and the artist residency blog at garesidency.art.

In an effort to think outside the box, something the Cape Ann TimeBank is known for, this grassroots organization has developed an event to provide some entertainment.

"The Great Gloucester Scavenger Hunt" will be held on Saturday, Sept. 12. The idea is that teams of two to five people — family and friends who are already in a "pod" — will meet at Stage Fort Park at 4:30 p.m. to receive their clues. For the next couple of hours, the teams will drive around Gloucester to photograph their team members in front of the identified places.

When the time period for the hunt concludes, there will be an award ceremony at Stage Fort Park — using social distancing rules. Participants need masks. The first prize will be $500, second prize $300 and third prize $150.

An alternative to bringing a full team would be to recruit "silent partners" who contribute to the team’s $100 entry fee and who can share in the potential prize money. Those wishing to enter can send a check to Lester Stockman, 11 Holly St., Gloucester, MA 01930 or go to the Gloucester Scavenger Hunt Facebook event page at facebook.com/capeanntimebank. The registration deadline is Sept. 7.

This is a benefit event for the nonprofit Cape Ann TimeBank, whose mission is to "empower members to give and receive services with one another using the currency of time and everyone's time is valued the same." For more information, visit capeanntimebank.org.

Optical art on view at restaurant

Gloucester's Minglewood Harborside and LuminArtz, in partnership with Hersch Visuals, will present an installation of illumination art on Thursday, Sept. 3, and Friday, Sept. 4, from 8 to 10 p.m. at the restaurant at 25 Rogers St., Gloucester.

Because of social distancing protocols, the best viewing options are either from walking by or from the restaurant, according to organizers.

The digital and video art that will be projected on a ground-level display will turn a section of Minglewood's deck into an immersive art installation. Artists participating are diverse not only in their disciplines and the content of their work but also in their backgrounds.

The Serenitee Restaurant Group became a partner in this display as a way to share hope and inspiration through public art. Guests on Minglewood's deck will be able to see the show. All seating is in accordance with state COVID-19 guidelines; masks are required when moving to and from a table.

Regina Piantedosi, who previously was part of the Rocky Neck Art Colony, is the featured artist at Local Colors, 121 Main St., Gloucester, for the month of September.

The artist describes her work as contemporary.

"It wasn't until my mother, a wonderful and talented painter, was in a nursing home in 2013 did I begin my journey into expressive, nonrepresentational art," she said. "Once I started painting, I knew it was the most important thing I had ever done emotionally and professionally and must follow this with total immersion."

After her mother died a year later, Piantedosi opened a studio/gallery on Rocky Neck, where she further developed her painting.

"Influenced by the ocean and cove right outside my door, I began painting singular, lonely, floating boats," she said. "It was a merging of my abstract roots and the plein air painters Rocky Neck Colony is known for. I also continued expanding into the abstract by adding encaustic, metal, glass and all types of mixed media."

She said that the singular boat concept formed organically from watching the empty boats from her former studio by the sea.

"There they waited through the foggy mornings, the relentless sun and the stunning sunsets," she said. "The reflection of the boat, the buoy, the mast. It whispered of serenity, solitude, isolation and turmoil. I took those emotions back into my studio and translated the feelings onto canvas."

GimmeLIVE’s outdoor drive-in music series, held at a parking lot at Manchester Athletic Club, has been canceled after the Manchester Board of Health fined the promoters for violations of the state’s COVID-19 guidelines.

Two of Gloucester’s fan favorites, Henri Smith and Jon Butcher, are among the artists whose September shows were canceled. For updates, visit gimmelive.com.

Opening on Saturday, Sept. 5, is "Ephemerata — a timeline of creation, a timeline of change," featuring works by Cape Ann artist Deborah Brown, who studied at the San Francisco Art Institute. This show will be at 19 Pleasant St. in downtown Gloucester. Hours are Saturdays and Sundays from 1 to 3 p.m.

Also on view from Friday, Sept. 4, in the SHED at 18 Arlington St., in Gloucester's village of Annisquam, is "Late Summer Selection" with new works by Adin Murray, who continues his "Horizon" series with oils on canvas. Hours are Fridays, Saturdays and Sundays from noon to 3 p.m.

Both locations are also open by appointment; call 917-902-4359. Works also can be viewed online at janedeeringgallery.com.