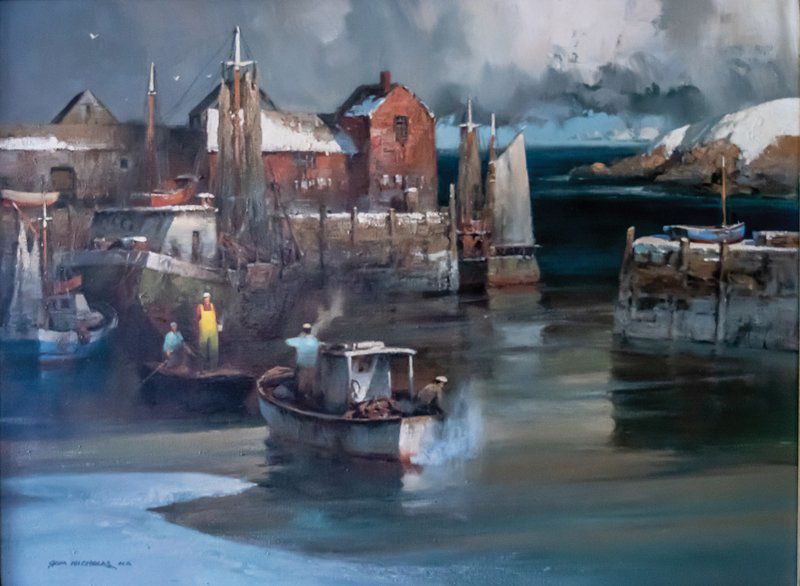 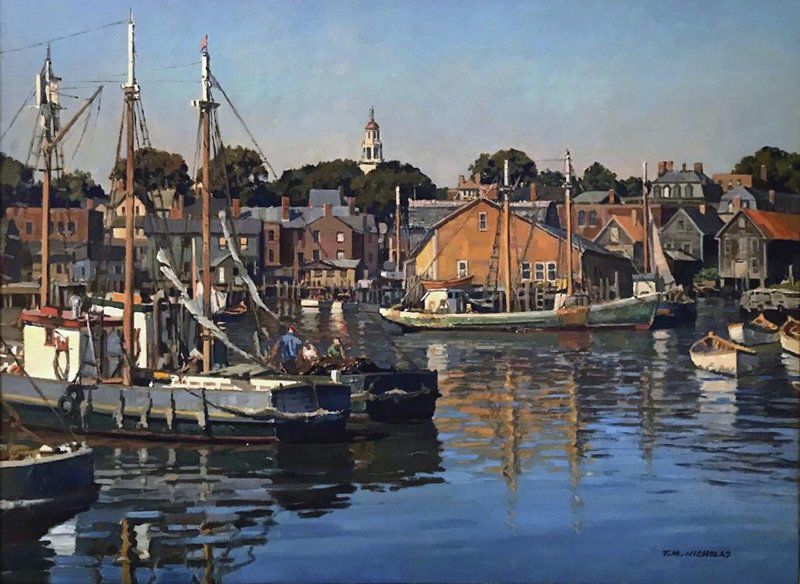 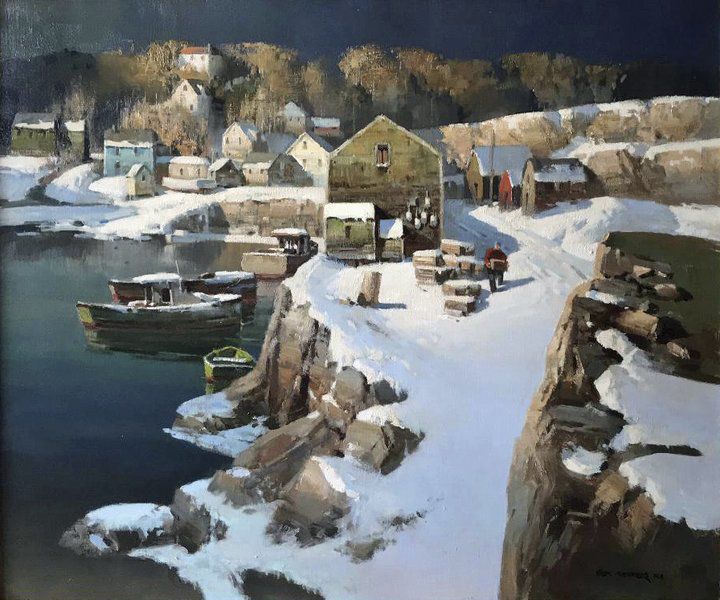 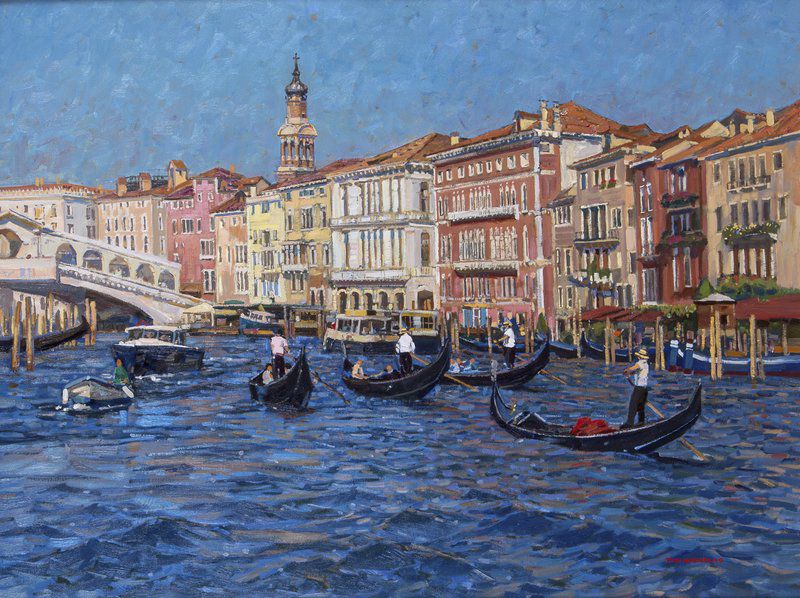 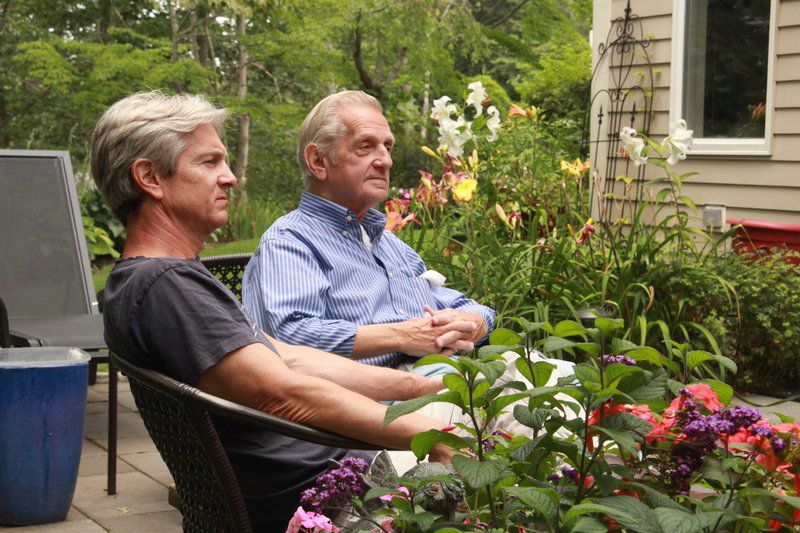 Courtesy photoTom Nicholas, right, and his son, T. M. Nicholas, showcase their shared passion for art in "Tom and T. M. Nicholas: A Father and Son’s Journey in Paint," an exhibit opening Saturday at Cape Ann Museum in Gloucester.

Courtesy photoTom Nicholas, right, and his son, T. M. Nicholas, showcase their shared passion for art in "Tom and T. M. Nicholas: A Father and Son’s Journey in Paint," an exhibit opening Saturday at Cape Ann Museum in Gloucester.

Artists are often asked how long it takes to create a painting.

But the answer typically belies the decades of study and practice undertaken by the painter.

In the case of Cape Ann father-and-son artists Tom Nicholas and T. M. Nicholas, the answer would be well over 100 years.

Both are lifelong painters, devoted to the study and pursuit of their craft.

The younger Nicholas, 56, equally passionate about art, has raised a family of four daughters on his earnings as an artist — no easy feat in the 21st century.

Their works have been viewed together at various galleries and in diverse exhibitions through the years.

Now, they are unveiling their first joint museum exhibit with the opening of “Tom and T. M. Nicholas: A Father and Son’s Journey in Paint” on Saturday, Jan. 11, at Cape Ann Museum in Gloucester.

Their awards may reveal the success of their artistic trails, but for both of these men, their lives have been driven by their art and ceaseless study of their art form in all its intricacies.

Both are plein-air painters and relish painting outdoors on-site. Cape Ann gives them endless subject matter, which is expanded even further though their international travels.

Tom Nicholas, of Rockport, has received more than 250 awards, including special prizes and distinctions, and 45 medals, including gold, silver and medals of honor. He has had 35 one-artist shows in Boston; New York City; California; Florida; Washington, D.C.; Maine; Texas; Ohio; Arizona; New Mexico; and Nantucket.

T. M. Nicholas, now of Essex, has received 131 awards, including special prizes and distinctions, and 18 medals, including gold, silver and medals of honor. He has had one-man shows in Massachusetts, Maine, California, Ohio, Vermont, Georgia and Rhode Island.

Their works are represented in many museums and corporate collections.

A lifetime dedicated to art

Tom Nicholas said that he knew as a boy that he wanted to pursue a career in the arts.

“Even in the early grades, I was always interested in art. It’s something that really made my life in school much more pleasant,” he said.

“When I was going to school, the only thing I excelled in was art. I always had top marks in art. But in all other parts of schooling, I passed, but I didn’t do as well as I should have. But the art really pushed me through school and helped me develop into a professional artist.”

As a 14-year-old, Tom persuaded his parents to allow him to study art at a trade school in Connecticut, where he was raised. He later won a scholarship to the School of Visual Arts in New York City, where he studied from 1953 to 1956.

In the beginning of his career, he worked primarily in watercolor, and in 1958, he became a member of the American Watercolor Society, in which he later earned the distinction of Dolphin Fellow.

After a painting demonstration given at the Rockport Art Association in 1960, Tom was offered a two-year traveling scholarship from the Elizabeth T. Greenshields Foundation in Montreal, Canada. He and his wife, Gloria, visited England, France and Spain.

They later moved to Rockport and opened a gallery in 1962, which celebrated its 50th anniversary years ago.

T. M. Nicholas said that in addition to learning about the world of fine art from his father, he learned many other life lessons.

He recalled how his father taught him the philosophy of why an artist creates paintings.

“I remember as a teenager studying with him, and he’d always say the world doesn’t need just another painting; you have to make it special or unique in some way,” he said. “That always stuck with me, and I strive to do just that.

“When I was young and very enthusiastic about art, I remember going into museums or galleries in Boston and seeing artists I admired, and you see a picture that takes your breath away,” he said. “And that’s the thing you want to try to do.”

Both father and son are known for their quiet, humble natures and their extraordinary work ethics.

“My father is a very honest person, and it carries over in his work,” T. M. said. “He always knew what he had to give to the career in order to progress and he willingly did all that work.

“The work ethic is really important and it can’t be understated, to work at your craft all the time — that’s how you progress,” T. M. said.

Even today, Tom is still working at his craft. When he traveled to Venice, Italy, last year, he spent 12 hours a day painting.

“Tom and T. M. Nicholas: A Father and Son’s Journey in Paint” represents a first for Cape Ann Museum because of the relationship between the two artists.

“The museum has worked with husband-and-wife teams in the past on exhibits, but never parent and child,” curator Martha Oaks said. “As we laid out the paintings in the gallery, we really got a sense of how Tom and T. M. have influenced each other as artists over the years and how T. M. has evolved on his own in recent decades.

“We also came to better understand how the two fit into the tradition of the Cape Ann School of landscape painting, a group that included such well-known artists as Emile Gruppe, Frederick Mulhaupt and Charles Movalli,” Oaks said.

“Tom and T. M., who command positions of leadership within that group, are an exciting vehicle for doing just that,” Oaks said.

Tom is thrilled at the opportunity to present this exhibit with his son.

“It’s really terrific,” he said. “Anything I can do with my son is special.”

His son echoed that sentiment.

“It’s like the realization of a childhood dream,” he said. “My father was always an important artist, and I wanted to be considered an artist with him. The whole thing is a little surreal.”

What: “Tom and T. M. Nicholas: A Father and Son’s Journey in Paint”

How much: $12 for adults; $10 for seniors, students and Cape Ann residents; free for members and youths 18 and under