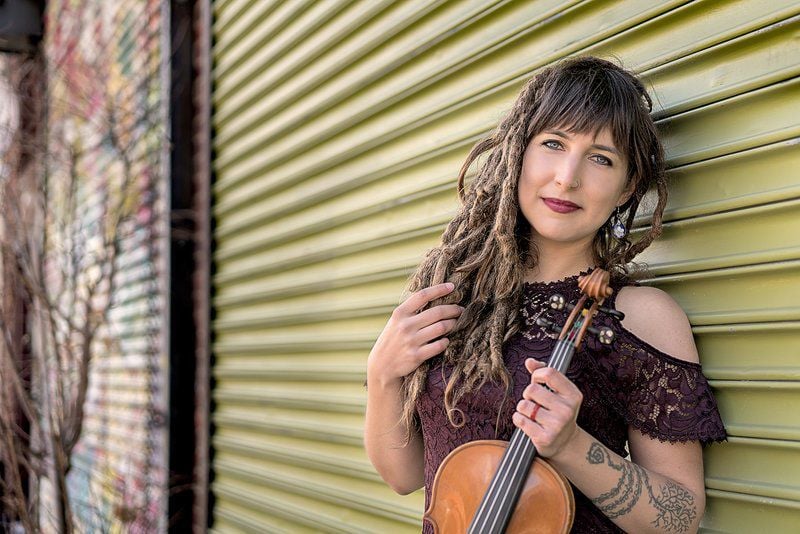 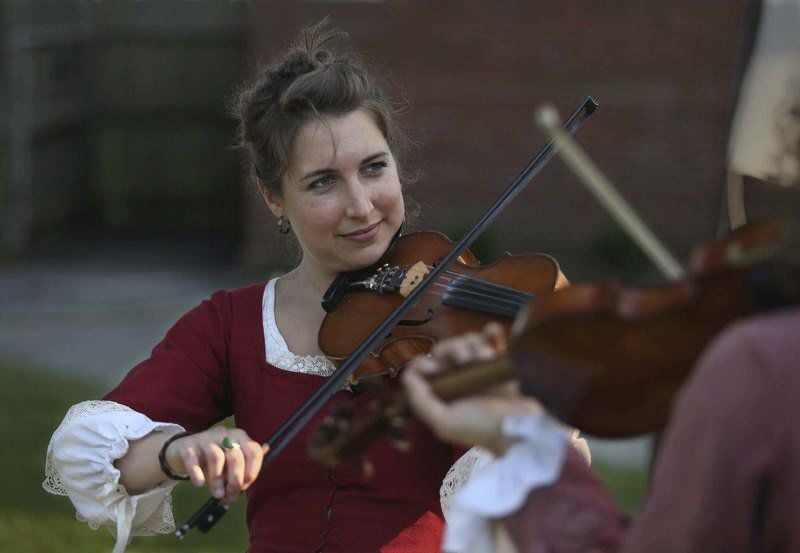 Staff file photoEmerald Rae, seen here playing fiddle during a Revolutionary War encampment at Fort Sewall in Marblehead, is taking a detour from her traditional Celtic fiddling to venture out as a folk singer and songwriter, sharing her diverse repertoire of original songs.

Staff file photoEmerald Rae, seen here playing fiddle during a Revolutionary War encampment at Fort Sewall in Marblehead, is taking a detour from her traditional Celtic fiddling to venture out as a folk singer and songwriter, sharing her diverse repertoire of original songs.

An accomplished Celtic fiddle player, Gloucester’s Emerald Rae has been writing songs since she was a child. As she continues her musical journey, her most recent self-titled album features her talents as a folk singer and songwriter.

Local audiences will have an opportunity to hear these latest works and more at two coffeehouse shows this weekend, one in Marblehead and one in Rockport.

Her 2018 album, composed of 10 original songs, features a variety of folk styles as she pushes the boundaries of the fiddle.

“I’m fiddling and singing now,” Rae said. “I make the fiddle sound like different instruments and create a lot of textures with it.”

On her folk-singing adventures last summer, she said that she had a blast unleashing her new solo material at the New Bedford Folk Festival and at the Falcon Ridge Folk Festival in New York, where she was chosen for the emerging artist showcase.

Rae’s training and background are diverse, giving her many fountains of inspiration to draw upon. Her musical education includes a degree in film scoring from Boston’s Berklee College of Music.

Her 2018 album received a five-star rating from Roots Music Report, which called it “one of the year’s more fetching releases,” giving a shout-out to the songs “Sadie Dear,” “When the Silvery Moon Comes Out to Play” and “Moving On.”

Rae is among the many local musicians who perform more widely off Cape Ann, and she has recently widened her scope from Boston and New England to places farther afield. Her tours often include gigs at Pete’s Candy Store, a venue for live original music in the Brooklyn borough of New York City.

“I’m touring all over the Northeast now and taking more and more dates,” Rae said. “I’m getting down to New Jersey and now moving into Florida and new regions in the Midwest.”

After her two appearance this weekend, she travels to perform at the Folk Alliance International in Montreal, Canada, from Feb. 13-16.

Rae has enjoyed exploring rhythmic and percussive fiddling, transforming the sound of her fiddle into “anything from bagpipes to flamenco or electric guitar, slap bass or ukulele.” Her voice also changes to meet the spirit of the music, from soulful to joyful.

Her mother’s family of Azorean descent resides in Gloucester, a place she has made home for the past 10 years.

“I’m part of the Portuguese community in Cape Ann. This is where my family and my heritage are from, and I love being by the ocean,” Rae said. “I feel at home here because there are so many musicians and artists and creative people who live here and find it inspiring.”

The daughter of a bass player and a singer, Rae spent her childhood immersed in music.

“My parents had a band when I was growing up, a country rock ’n’ roll band,” she said. “I grew up surrounded by music. I got interested in music through country music, and I ultimately chose the fiddle as my instrument of choice. I heard a lot of fiddle music and felt very drawn to it.”

As she departs from her previous path as a traditional Celtic fiddler, she is venturing in her new musical path, through which she is eager to share her songs that she has been writing for the past 25 years.

“The album is reflective of the variety of music I listen to. I am focusing on my voice and the fiddle accompanying it. It’s very much fiddle- and voice-centered,” Rae said. “I play different folk styles, so each song has a particular flavor.”

“She’s a gifted musician. She’s done a few records, and each time, it’s different,” he said. “Some of the tunes are haunting. She’s carving out a personal niche for herself. She’s got a great personality and a beautiful voice. She’s very engaging when she performs. It’s clear she feels at ease, and that comes across and makes people feel comfortable and open to what she is going to present.”