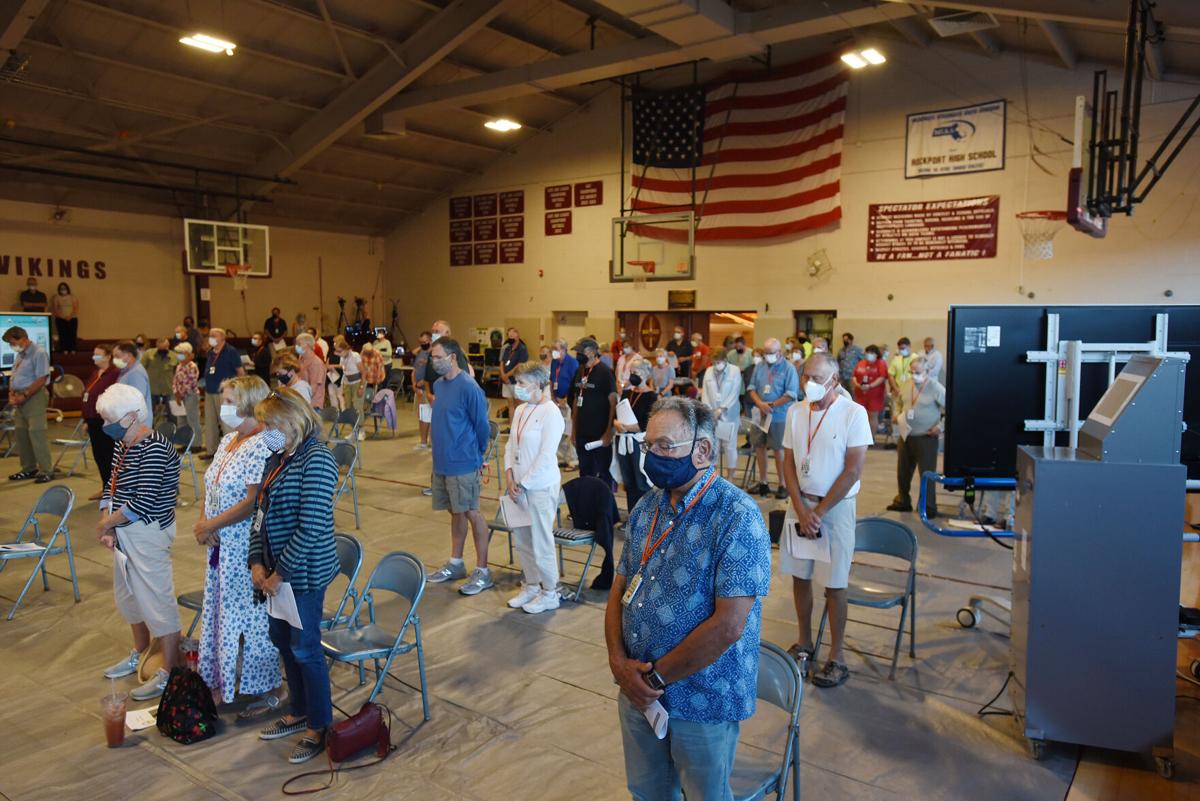 Voters stand in a moment of silence to commemorate the 20th anniversary of the 9/11 terror attacks during Rockport’s Fall Town Meeting on Monday at Rockport High School. 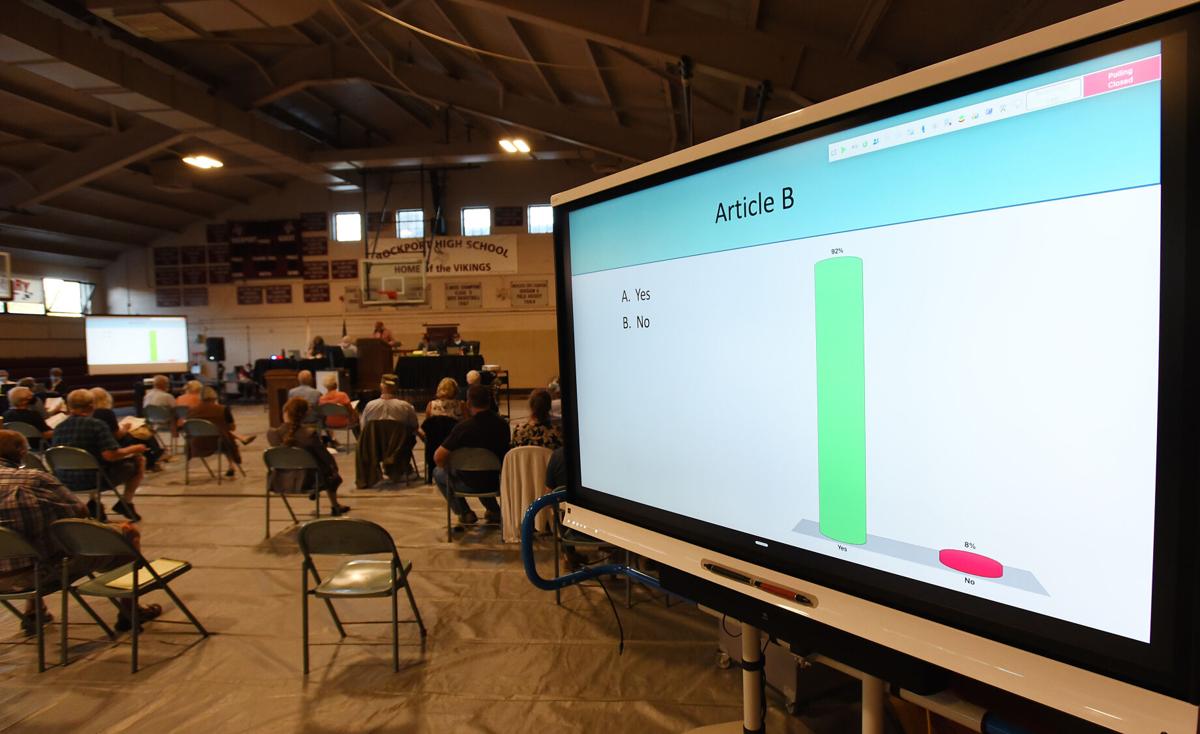 Article B passes by a majority via electronic voting during Monday’s Rockport Fall Town Meeting at Rockport High School. 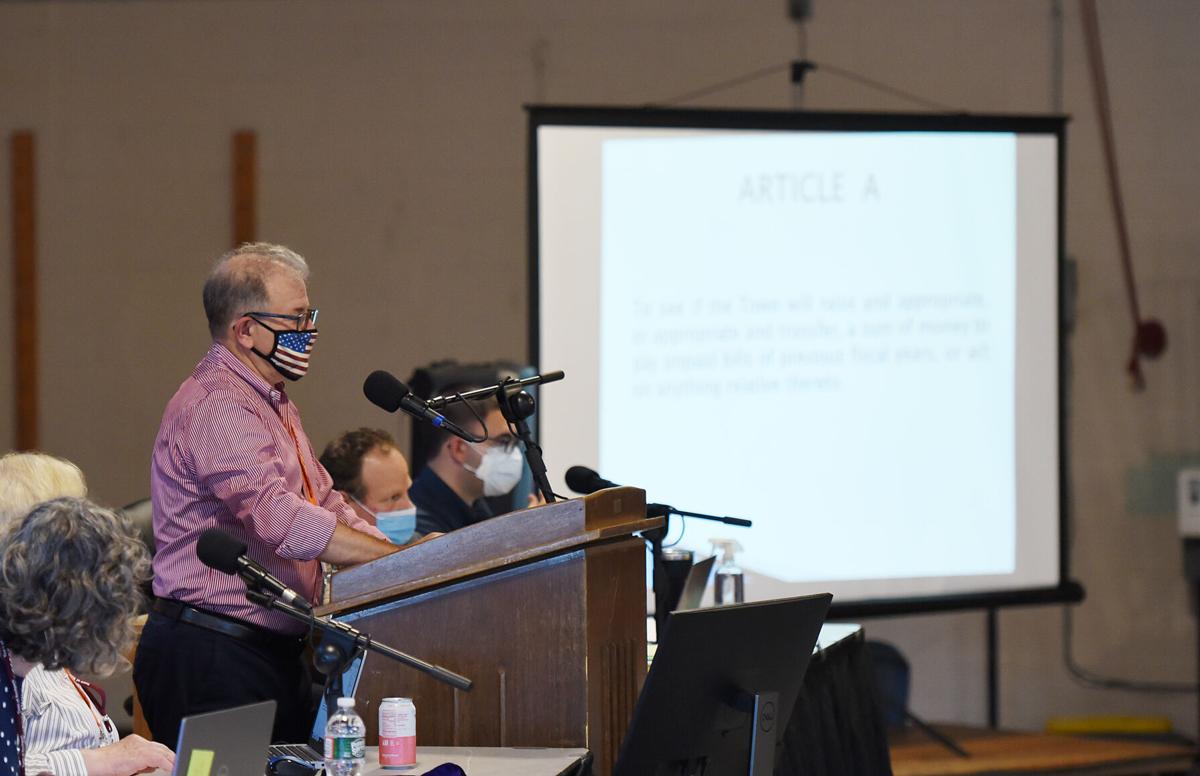 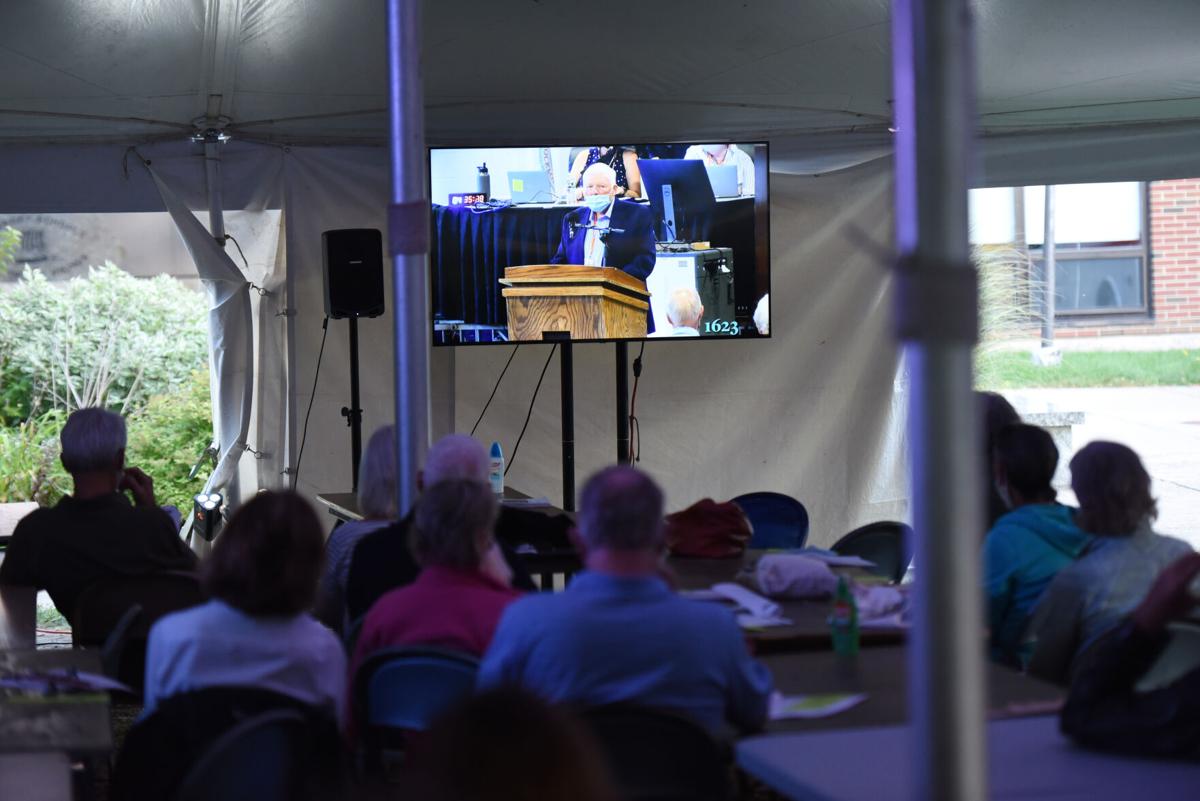 Voters stand in a moment of silence to commemorate the 20th anniversary of the 9/11 terror attacks during Rockport’s Fall Town Meeting on Monday at Rockport High School.

Article B passes by a majority via electronic voting during Monday’s Rockport Fall Town Meeting at Rockport High School.

If approved, the non-binding Article H would have given the town the green-light to pursue outside funding and grant opportunities for the long-awaited project. It failed with 77 in favor versus 135 against.

During public comment, the vast majority of voters in attendance spoke out against the article. Most expressed concerns about the project’s possible negative impact on the environment.

“It’s a folly for the town to be spending money on this given the challenges that we face,” she said.

Alan MacMillan, a resident of Pigeon Cove and Conservation Commission member, said the town should not spend money on something that will “serve very few” when there are more immediate issues the town faces, such as affordable housing.

A feasibility study conducted by Weston & Samson Inc. found Granite Pier was the most appropriate place in town to put a fueling station. It states that “there are more than 300 boats stored at Rockport harbors, with roughly 270 boats having no ready access to fuel.”

Kate Webster of Granite Street said a fueling station would dramatically change the landscape of the historic Granite Pier.

Members of the Granite Pier Committee have fought against the project, stating it will further commercialize the town.

“Just like the historic downtown has the responsibility to maintain the character close-up, the distant vistas and backdrop (at Granite Pier) for the millions of pictures taken from our shoreline should be preserved,” the committee wrote in a letter to selectmen regarding the proposed project.

Article G, which sought an independent fire district in Rockport free from town oversight, did not see a motion at Monday’s meeting.

The article was placed on the warrant by petition from a group of residents known as the Rockport Independent Fire District Petitioners. Selectmen previously worked with the petitioners to sponsor an article on the issue for Annual Town Meeting in the spring, but voted against putting any such article on the spring warrant after Rockport Fire Department Chief Kirk Keating and the department’s captains declined to support an independent fire district.

For Fall Town Meeting, the article was submitted as a community petition, which is required by state law to be included on a Town Meeting warrant if it receives enough signatures.

“The lawyer for the petitions came before the Board of Selectmen pre-meeting and informed them they will not making a motion on the article,” said Town Administrator Mitch Vieira after Monday’s meeting. “They will be informing the court of the same.”

In a statement provided to the Times, the Petitioners said recent changes in the Rockport Fire Department's leadership satisfied them enough to drop the fight for an independent fire district entirely.

"Despite the terrible and embarrassing treatment of (former fire) Chief (James) Doyle, positive changes have come to light," it reads. "The director of emergency services position was removed along with other changes to the leadership. The town government, though slowly, has responded to the will of the voters."

The Petitioners' attorney, Michael Walsh, confirmed that the article is dead.

"The goals of the firefighters were met and our issue was to support them and Chief Doyle," he said in an email. "It remains a statutory right for any seven freeholders to bring (the article) again (at another town meeting), if the firefighters are treated poorly. But if it comes back, it will not be us bringing it."

As the delta variant of COVID-19 continues to spread across the country, town officials offered the 239 voters — of the 6,100 registered — attending the meeting the option to sit inside the Rockport High School auditorium, where the meeting was held, or watch a live TV feed under a tent out on the lawn. Those inside sat six feet apart and were required to wear masks. A midway moderator relayed the votes of the 40 or so who chose to sit outside via walkie-talkie. All attendees cast their votes electronically through wireless voting devices supplied by the town.

Some attendees indoors found it hard to hear the proceedings as sound from the PA system bounced around the large auditorium. The problem was averted, though — speakers were asked to annunciate harder into the microphone through their masks.

A final vote count Article B could not be tabulated at the time of publication. It is believed to have been caused by a communication breakdown between the indoor and outdoor cohorts early in the meeting.

"I cannot confirm the total count in the tent at this time," said Assistant Town Clerk Melanie Waddell via email Tuesday afternoon, "However I believe it to be 36 in favor and two opposed. In the gymnasium it was 135 in favor, 11 opposed."

The town has 6,100 registered voters.

D: Set aside $70,000 each from the estimated fiscal year 2022 Community Preservation Fund revenue to the following funds:

E: Use nearly $500,000 in Community Preservation Act grant funding to support the following:

F: Pay the town’s share of the collective bargaining agreement with the Massachusetts Coalition of Police Local 154 — Sergeants and Patrol Officers. — APPROVED, 188-16.

Due to a reporter's error, Alan MacMillan was referred to as a former Conservation Commission member in the original version of this story, published in print and online. MacMillan stills serves on the commission as he has for 34 years.