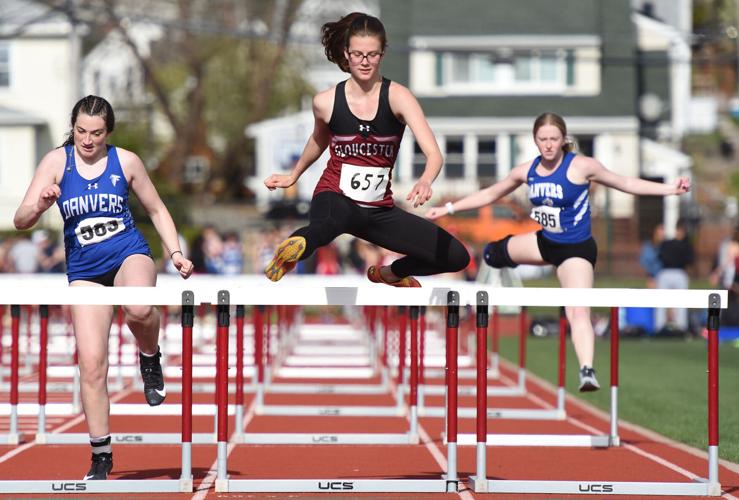 Gloucester’s Ella Young, center, takes the lead in the 100 meter hurdles in Wednesday’s meet against Danvers. 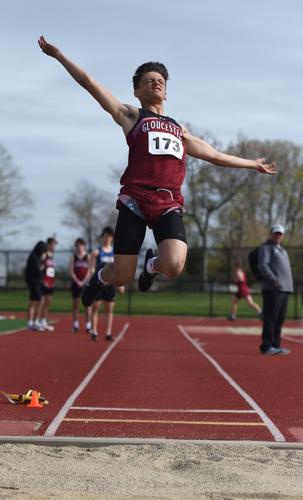 Gloucester’s Josh Silva takes flight in the long jump on Wednesday at Newell Stadium against Danvers. 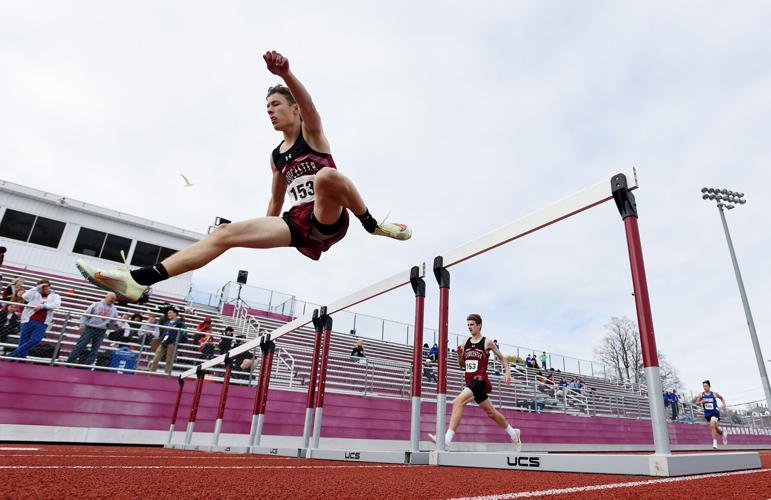 Gloucester’s Nate Gardner goes over one the final hurdles in the 400 meter hurdles on Wednesday at Newell Stadium.

Gloucester’s Ella Young, center, takes the lead in the 100 meter hurdles in Wednesday’s meet against Danvers.

Gloucester’s Josh Silva takes flight in the long jump on Wednesday at Newell Stadium against Danvers.

Gloucester’s Nate Gardner goes over one the final hurdles in the 400 meter hurdles on Wednesday at Newell Stadium.

The Northeastern Conference Lynch championship was on the line for both the Gloucester boys and girls outdoor track teams on Wednesday against Danvers.

While the Fishermen competed well in both meets, it was the girls that took home the NEC Lynch title with an 80-55 victory at Newell Stadium. It is the second straight NEC Lynch Division title for the Gloucester girls in the outdoor season. The boys, on the other hand, fell by a score of 77-59. Danvers takes home its second straight NEC Lynch outdoor title while Gloucester finishes as the runner-up for the second season in a row.

“It was an awesome meet, I’m so happy for the girls to be able to get it done for the second year in a row,” Gloucester head coach David Coleman said. “We had a lot of turnover from last year’s team but a lot of underclassmen really stepped up to get the conference championship again.”

Senior Darcy Muller led the way for the Gloucester girls with first place finishes in the 100m, 200m and the long jump to go with a second place finish in the shot put.

Gloucester also got wins from Caelie Patrick in the mile, Caroline MacKinnon in the 800m, Abby Stauffer in the high jump, Megan Hurd in the triple jump and the 4x400m relay team of Sky Ciolino, Rose Groleau, Stauffer and MacKinnon. Ciolino finished second in the 400m while Hurd turned in second place finishes in both the long jump and the 100m. Lassen Ando also had a strong afternoon, placing in both hurdle events.

The Gloucester girls are now 5-2 on the season but finish up at 4-0 against NEC Lynch competition.

The Gloucester boys, who are now 4-3 (3-1 in the NEC Lynch) were led by senior Andrew Coelho, who picked up a win in the triple jump, surpassing 40-feet for the first time, the 400m and the 4x400m relay along with Colby Rochford, Josh Silva and Kayky Barbosa. Rochford also had a first place finish in the 800m with teammate Finn O’Hara finishing right behind him in second place.

Nate Gardner won both hurdle events with Jack Newton finishes second while Mike Toppan finished second in the shot put and third in the discus to lead the throwers.

“The boys performed well despite the loss,” Coleman said. “Danvers is a strong team but it was a good day for some of our top athletes.”

Championship season is now beginning for outdoor track teams. While Gloucester has one more NEC dual meet remaining next week against Masconomet in crossover action, the conference meet follows on May 21 and the Division 4 State Meet is on May 28.

“This team is really built for the conference meet because we have the quality of talent,” Coleman said. “It’s an exciting time of year and we’re going to get the chance to compete against some serious competition.”