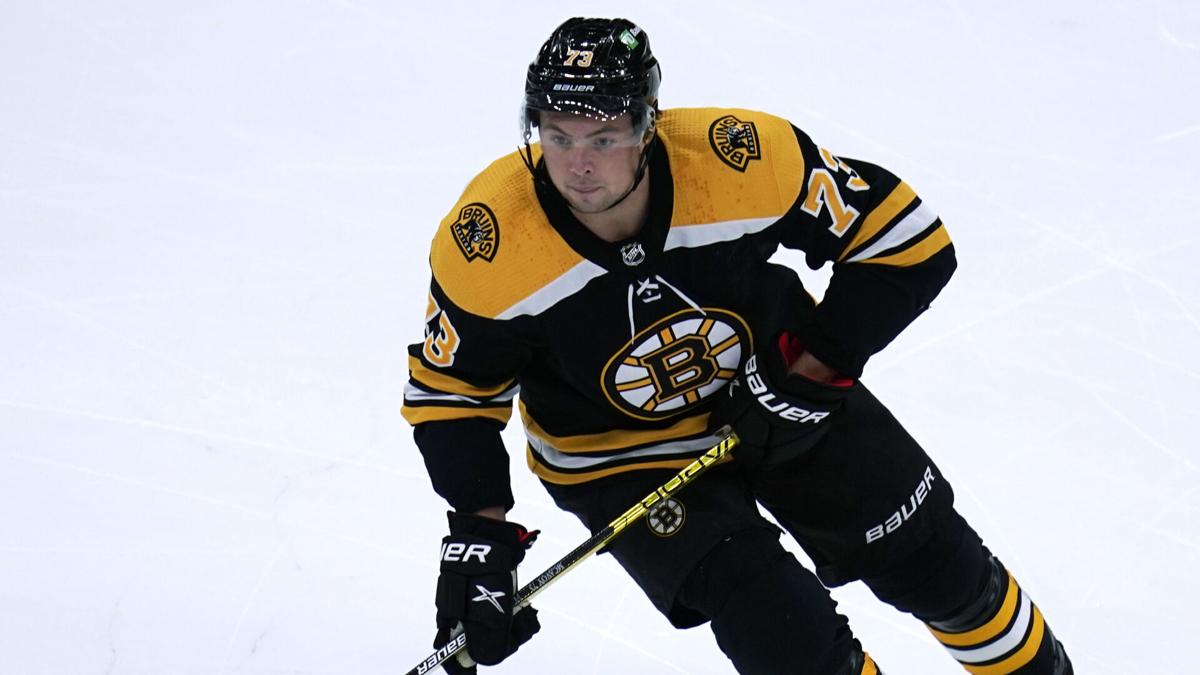 With more responsibility at both ends of the ice this season, look for Bruins defenseman Charlie McAvoy to make the leap into superstardom during the 2021-22 campaign, which begins Saturday night at home against Dallas. (AP Photo/Charles Krupa) 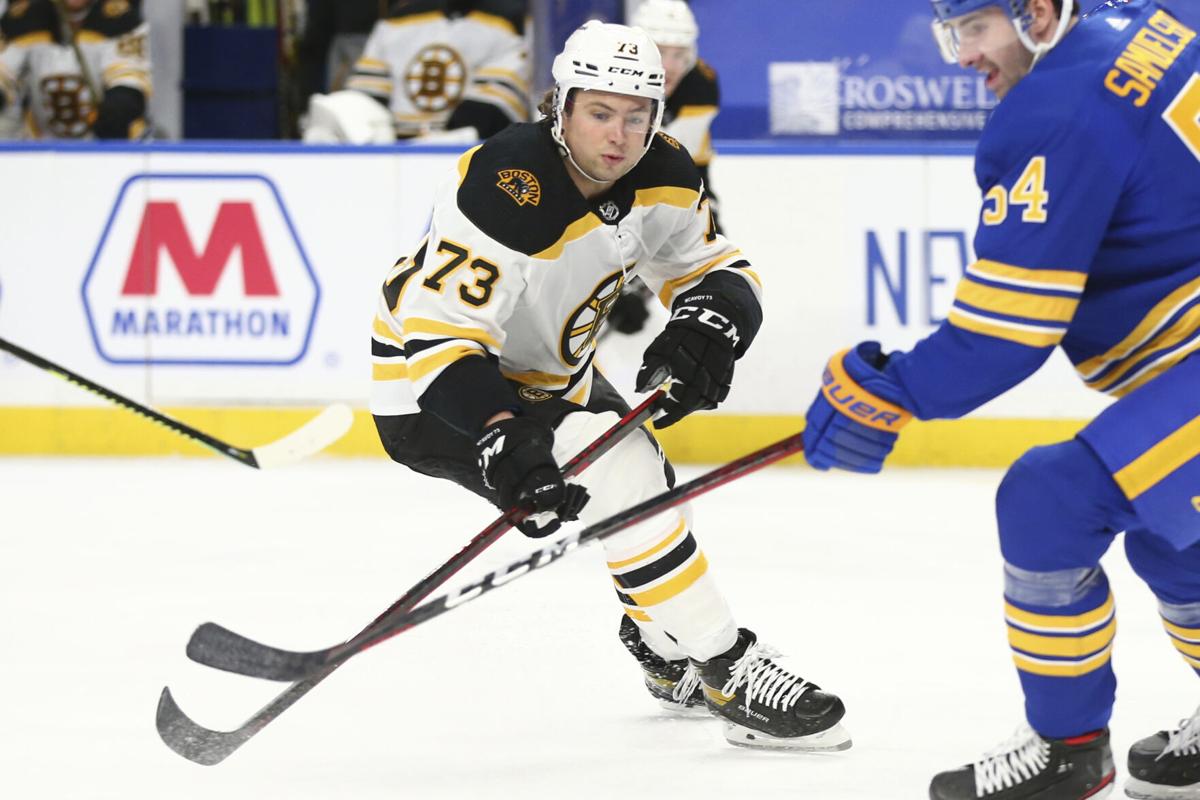 Bruins defenseman Charlie McAvoy should see a significant increase in his point production this season if he remains a part of Boston's top power play unit.

More than any other team in National Hockey League, the Boston Bruins have employed some of the game's greatest defensemen. No one in the sport's history can touch Boston's Mount Rushmore of Rearguards: Eddie Shore, Bobby Orr, Raymond Bourque and Zdeno Chara.

This might well be the season, though, where Charlie McAvoy begins his ascent towards one day rightfully joining that Fantastic Foursome.

On a Black-and-Gold roster that lost two valuable pieces from the last decade yet still expects to compete for the Stanley Cup, all signs point to McAvoy making the leap into the exclusive club of the World's Best Defensemen. Entering into his fifth full NHL season, the 6-foot, 208-pounder is poised to add more offense, remain defensively sound, and gobble up minutes as if they were Swedish Fish.

And make no mistake: when he becomes a restricted free agent after the season, he is going to be a very, very rich man. He currently hauls in a reasonable $4.9 million dollars per year, but there's reason to believe a 23-year-old franchise defenseman such as he could command up to double that.

Head coach Bruce Cassidy and the Boston brass know this. When asked during training camp whether he believed McAvoy can keep elevating his game, the bench boss replied "I do; I do believe there's another level. But I've got to be careful, because (McAvoy's new contract could be) $9-10 million."

Victor Hedman, Roman Josi, Cale Makar, reigning Norris Trophy titlist Adam Fox, Seth Jones, John Carlson, Alex Pietrangelo and former Bruin Dougie Hamilton make up the league's current aristocracy among defensemen. This is the season where McAvoy should not only join them, but could also surpass past many of them in terms of overall talent, potential and impact.

Goaltender Tuukka Rask is out until at least early February; he or may not ever return to the Bruins' cage. That means that McAvoy will need to be even more responsible in his own end, whether it's rookie Jeremy Swayman or newcomer Linus Ullmark tending the pipes. His new partner, Derek Forbort, will be the defensive conscious of the two, but McAvoy will still be expected to clear the zone, win puck battles and throw his size around as needed.

At the same time, Forbort's presence should also allow McAvoy to join the rush more often, a facet of the game he excels at. Between his expertise at carrying the puck out of the zone, finding teammates with crisp outlet passes in the neutral zone, and gaining the offensive blue line to set up potential scoring chances, he's a big boon to Boston's attack.

Take this snapshot from McAvoy's portfolio, coming earlier this month in a preseason game against Washington at TD Garden. Getting the puck in the high slot, he beat a pair of Capitals defenders by twisting his way past them, all while keeping control of the disc, and drove the net with authority, eventually dishing off to Craig Smith at the far post for a scoring bid.

If McAvoy remains with the Bruins' first power play unit -- as he did in the preseason with forwards Brad Marchand, David Pastrnak, Taylor Hall and captain Patrice Bergeron -- his offensive output should skyrocket. On the man advantage, he's got Torrey Krug potential (plus a much more well-rounded game). His previous career highs (7 goals, 32 points) could, if everything goes to plan, be rendered past history by February.

Expect to see McAvoy wearing the letter 'A' for at least part of this season on his sweater, too. Only Brad Marchand is a permanent alternate captain to Bergeron at the moment, and it wouldn't be surprising to see guys like McAvoy, fellow defenseman Brandon Carlo, and Pastrnak also carry that designation at various points during 2021-22 (as they did during the preseason).

Superstar skaters can be found on virtually NHL roster, but you could argue the Bruins' quartet of McAvoy, Marchand, Pastrnak and Bergeron are at the top of this uber-elite heap. Two-time defending Cup champion Tampa Bay would certainly have a case with Nikita Kucherov, Brayden Point, Steve Stamkos and Hedman, as would Colorado with Nathan MacKinnon, Mikko Rantanen, Gabe Landeskog and Makar). Vegas (Alex Pacioretty, Mark Stone, and blueliners Shea Theodore and Pietrangelo) and Toronto (Auston Matthews, Mitch Marner, John Tavares and D-man Morgan Rielly) could also make a similar claim, albeit with a less convincing argument.

As long as Boston's Core Four remain healthy and they get decent goaltending, their championship window remains open.

Another few strides up the ladder to dominant defenseman status by McAvoy will go a long way towards achieving that ultimate goal.