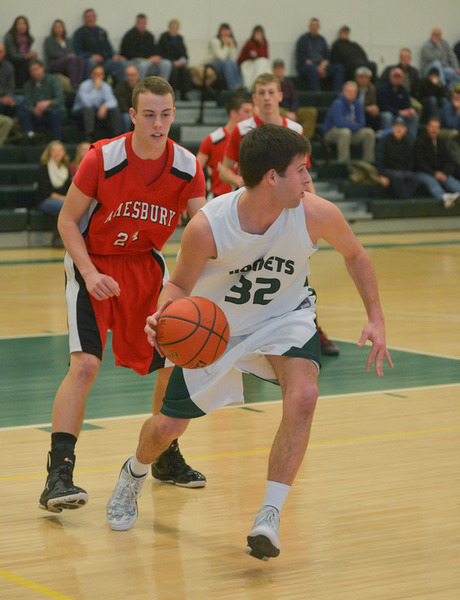 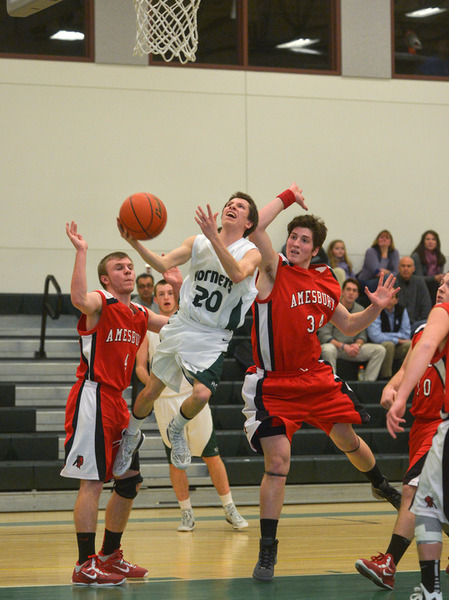 Manchester Essex guard Liam Aldrich takes it to the basket between Amesbury's Patrick Halloran and Grant Bellino Tuesday at MERHS. 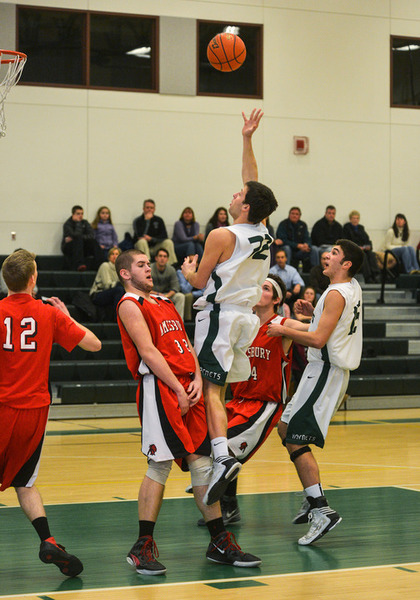 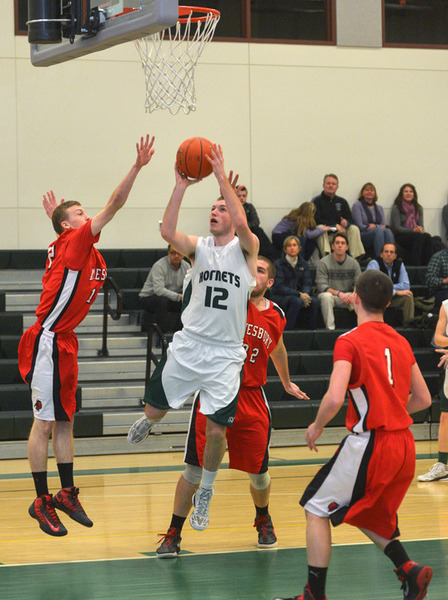 Manchester Essex guard Liam Aldrich takes it to the basket between Amesbury's Patrick Halloran and Grant Bellino Tuesday at MERHS.

MANCHESTER— In every sense of the word, the Manchester Essex boys basketball team survived Amesbury at home Tuesday night.

The Hornets jumped out to a 15 point lead at the half shooting 60% from the field in the process and appeared to be running away with a victory.

But the Hornets followed that up by shooting just 16% from the field in the second half leading to just 12 points over the final two quarters letting Amesbury back into the game in the fourth quarter.

But thanks to a clutch basket from Dylan Estes and two free throws from Max Nesbit in the final minute, the Hornets came away with a 52-49 win improving to 9-7 on the season and needing just one win in their final four games to get back to the state tournament.

“That’s a perfect way to put it, we survived,” Manchester Essex head coach Bryan Shields said. “I think this shows how far we have come as a team. Sure we didn’t shoot the ball well in the second half but at the end with the game on the line we made plays when we needed to. Early in the season that same game may have ended up being a tough loss for us.”

With one minute to play in regulation Amesbury finally erased a deficit that was as big as 17 points (35-18) when Kyle Arseneau (team high 14 points) drained a jump shot to give the Indians their first lead of the game at 49-48.

They would stop the Hornets on their next possession only to turn the ball over back to Manchester Essex. After a timeout senior Estes hit what turned out to be the game winning layup on a perfect pass from Taylor Ketchum in the post. Nesbit stole the ball on the Indians next possession, was fouled, and hit both free throws to make it 52-49.

Amesbury’s last ditch three point attempt at the buzzer fell shy and the Hornets hung on for the win. In an early season matchup Amesbury topped Manchester Essex on a buzzer beating three pointer.

“We made up for a bad first half with a good second half, but Manchester Essex made the big plays this time,” Amesbury head coach Thom Connors said. “We had a chance at the end with the ball and we turned it over. But I thought it was a good effort from both teams.”

Manchester Essex took control early in the first half starting the game on an 8-0 run and extending that lead to 20-5 late in the frame. Amesbury cut the lead to 21-10 by the end of the quarter but Manchester Essex continued to pressure on defense and move the ball around on offense creating good looks to open up a 40-25 lead at the break.

“I thought we moved the ball well and we rebounded the ball well in the first half,” Shields said. “They’re a good rebounding team and we did a good job boxing out down low.”

“They were beating us up and down the floor,” Connors said. “We had to make adjustments in the second half.”

As it turned out, the Indians did make second half adjustments, and they worked. Manchester Essex was suddenly ice cold from the field as the Indians picked up the defensive pressure. The visitors also started to rebound the basketball better and all of a sudden found themselves trailing by just four points after a 13-2 run to open the third quarter.

The Indians started to even out the rebounding battle and strong offense from Grant Bellino, who scored eight of his 12 points in the third quarter, brought them back.

“We started boxing out better and denied them the baseline,” Connors said. “We made them take more difficult shots.”

A Tommy Connors three pointer cut the lead to 44-41 before the Hornets put one in at the end of the third to take a 46-41 lead into the final quarter of play.

The Hornets struggled continued in the third, but the Indians also struggled from the field thanks to lock down defense from both teams. After chipping away at the lead for the majority of the quarter, Amesbury finally took the lead with one minute to play only to see Manchester Essex take it back for good.

Liam Aldrich led all scorers with 19 points while Nesbit chipped in 13 and Estes 10. Arseneau led Amesbury with 14 points, Bellino had 12 and Connors 10.

With the win Manchester Essex can clinch a tournament berth with a win on Friday at Rockport in a Cape Ann showdown.

“Our focus is on one more win to get into the tournament,” Shields said. “I like the way we are playing right now and we are going to take it one game at a time, right now our focus is on Rockport.”