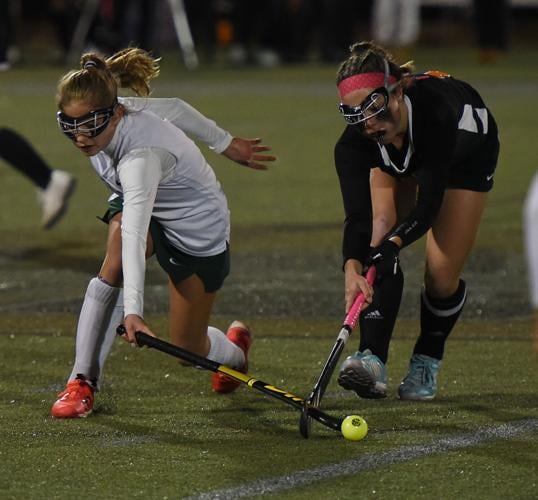 Manchester Essex’s Caelie Patrick tries to poke the ball away from Uxbridge’s Kendall Gilmore in last year’s semifinal meeting. Both players will be back on the field this Saturday in the Division 4 State Finals. 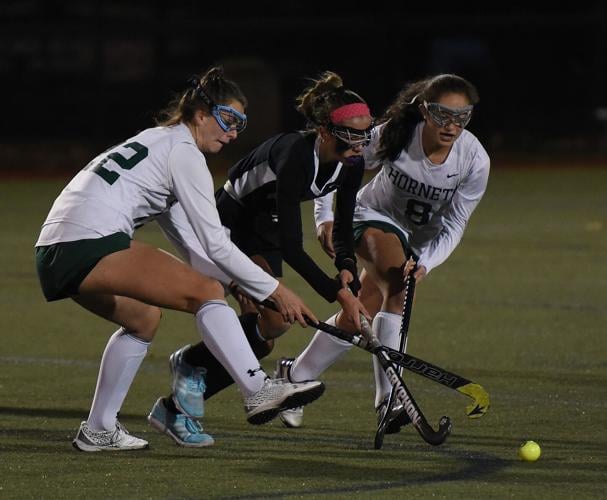 Manchester Essex defenders Hadley Levendusky (left) and Helaina Davis (right) will have to contend with a high powered Uxbridge offense in the Division 4 State Finals.

Manchester Essex’s Caelie Patrick tries to poke the ball away from Uxbridge’s Kendall Gilmore in last year’s semifinal meeting. Both players will be back on the field this Saturday in the Division 4 State Finals.

Manchester Essex defenders Hadley Levendusky (left) and Helaina Davis (right) will have to contend with a high powered Uxbridge offense in the Division 4 State Finals.

Saturday will be 368 days since the last time the Manchester Essex and Uxbridge field hockey teams met.

It was the 2021 Division 4 Semifinals and it was Uxbridge that left Victory Field in Watertown with a resounding 6-0 win en route to the State Championship. On Saturday, the Hornets have earned a second chance. No. 2 Manchester Essex (16-3-3) will take on No. 1 Uxbridge (22-0) in the Division 4 State Championship Game at Norwell High School (11 a.m.).

Manchester Essex has come full circle since the last time it played Uxbridge, earning its first appearance in a state final since 1995, when Manchester High School took home the Division 2 State Crown. This year’s Hornets squad, which is very similar looking to last year’s squad, is one year older, one year wiser and is hungry for a state crown and another crack at the defending champion Crusaders.

Both Manchester Essex and Uxbridge reached the Division 4 State Finals in dramatic fashion. Manchester Essex scored with eight seconds left in regulation to tie Cohasset and eventually won in a shootout. Meanwhile, Uxbridge was taken to double-overtime in its semifinal game against Monmoy, winning 3-2 in double overtime.

“We know Uxbridge is a daunting team,” Manchester Essex head coach Courtney Brown said after Tuesday’s semifinal win. “The girls really wanted to play them again and they’re hungry. Based on their semifinal and our semifinal, I think it’ll be an evenly played game and I’m confident we can step up and win.”

It has been a long yet highly successful road back to the state finals for the Hornets. Playing for all the marbles for the first time in 27 years, Manchester Essex has seen its fair share of big moments and heartbreak along the way. The program reached the North Sectional Final nine times since its last state finals appearance, losing eight of those matchups to Watertown and another loss to Weston. The program got over the hump and into the Division 4 Semifinals last year until it ran into the Uxbridge road block.

The 2022 Hornets are a senior laden squad that has been impressive in four state tournament wins, outscoring opponents by a combined score of 15-1, not allowing a goal until the semifinal win over Cohasset.

Manchester Essex is strong at every layer of the field with Caelie Patrick leading the offensive charge while Grace Gerhardt has scored the teams last two goals, the dramatic tally with eight seconds left in regulation against Cohasset and the lone goal in a 1-0 Quarterfinal win over Lunenburg. Abby Kent, Ava Grace Magnuson and Torrin Kirk are also formidable offensive performers that can find the back of the net with regularity.

Senior captain Amy Vytopilova and Ella Chafe join Patrick in a standout midfield while fellow senior captain Hadley Levendusky is a standout defensive midfielder that is also a contributor on corner tries. Helaina Davis and Phileine DeWidt lead a standout defense in front of goalie Paige Garlitz, who was especially clutch in the semifinals against Cohasset with 10 saves, several of them in high pressure situations.

In Uxbridge, the Hornets will be taking on another balanced squad that has also been dominant in four tournament wins, outscoring teams by a combined score of 24-3. This game will pit strength vs. strength as the Hornets defense will have to contend with a deep and high powered Uxbridge offense.

Leading the way for Uxbridge offensively is a trio of freshmen in forwards Kendall Gilmore, who scored the game winner in double overtime against Monmoy, and Julia Casucci along with midfielder Amelia Blood. Sophomore Elyse Bouchard is also a potent offensive threat. Bouchard, Blood and Gilmore all found the back of the net in last year’s semifinal win over the Hornets.

The Spartans can spread the ball around and quickly move the ball upfield while Manchester Essex has done a masterful job defending its own circle, especially on corners, in the tournament.

Will Manchester Essex’s experience and standout defense win out? Or will Uxbridge’s young firepower claim a second straight state title? We will find out on Saturday.