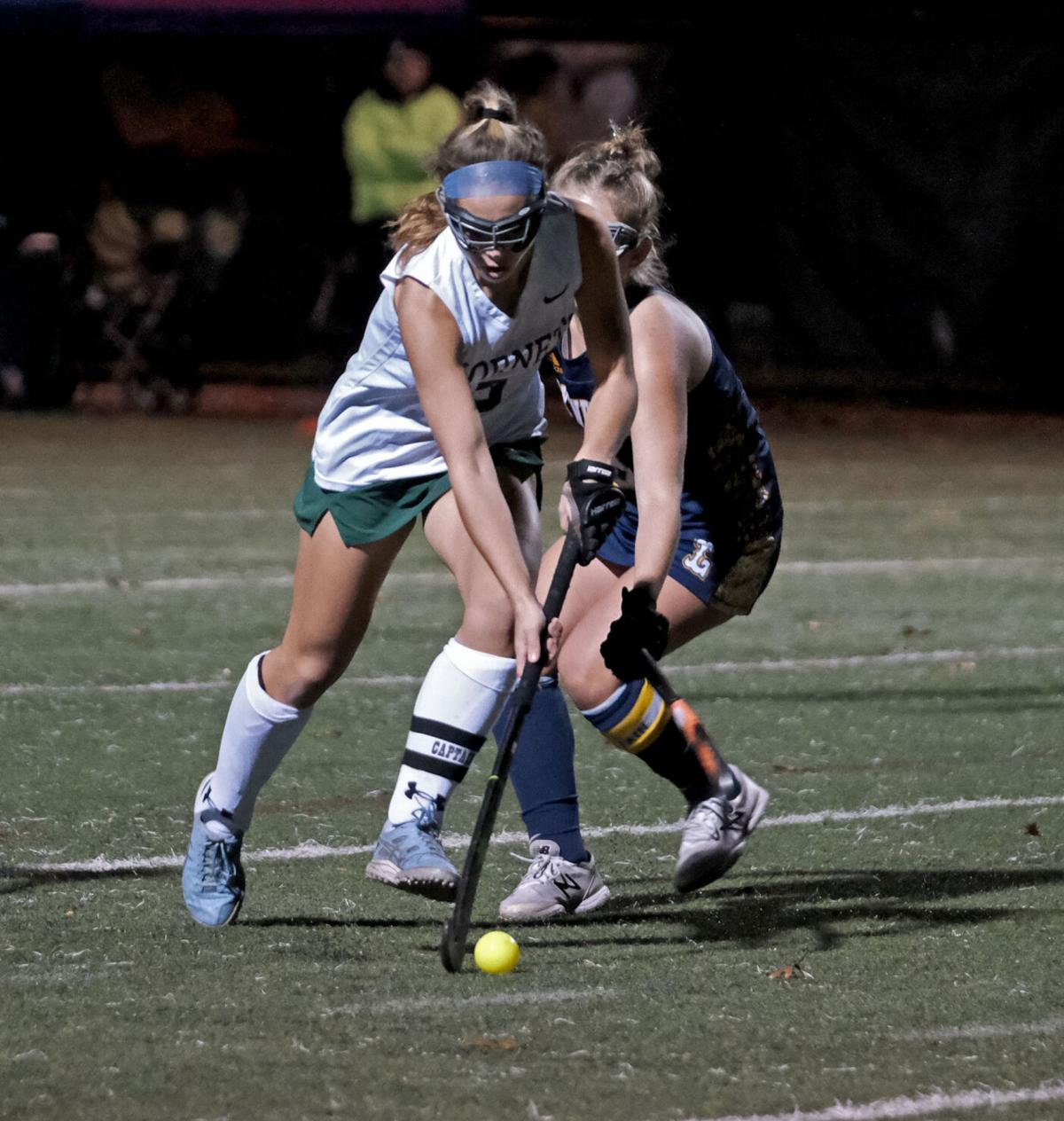 Manchester Essex’s Amy Vytopilova moves past Lynnfield’s Anna Kaminski in the first half of Saturday’s Division 4 Quarterfinal at Hyland Field. 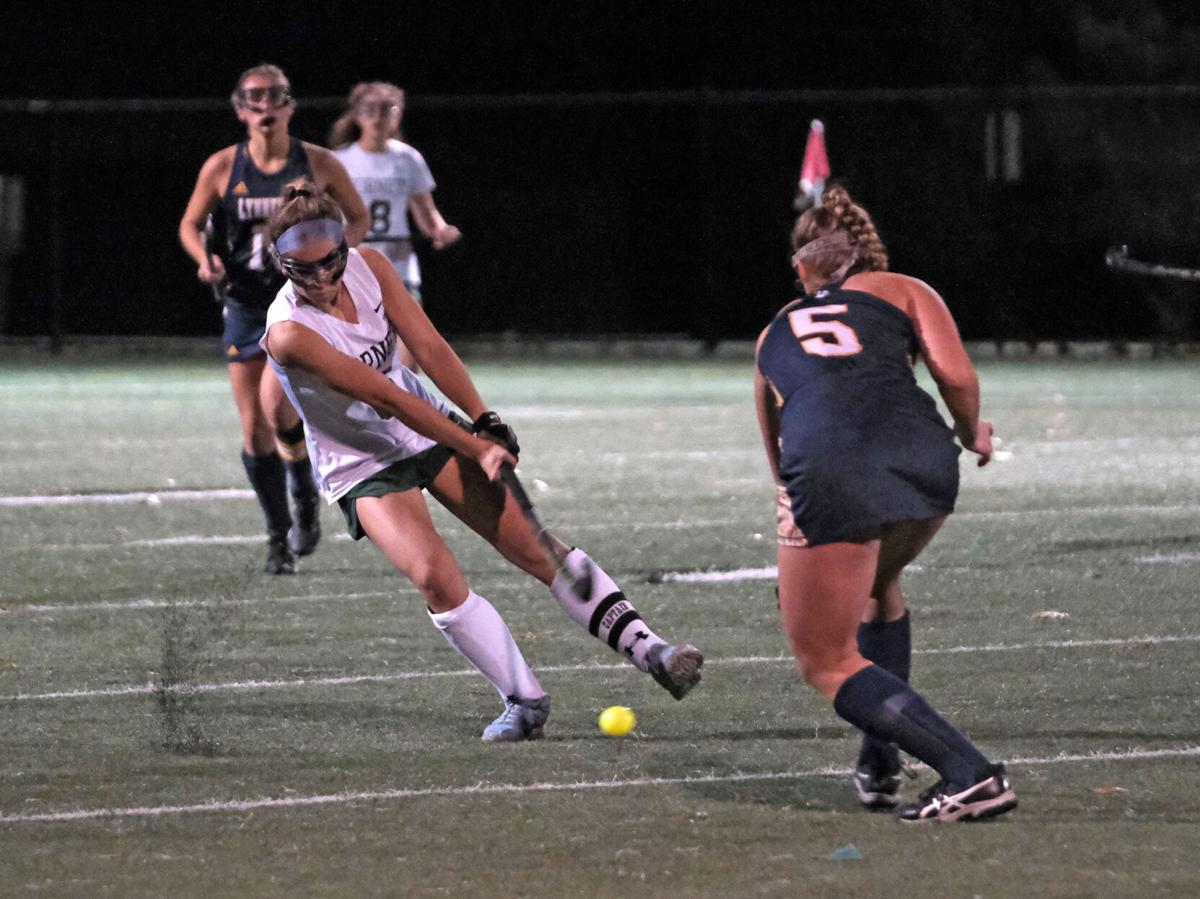 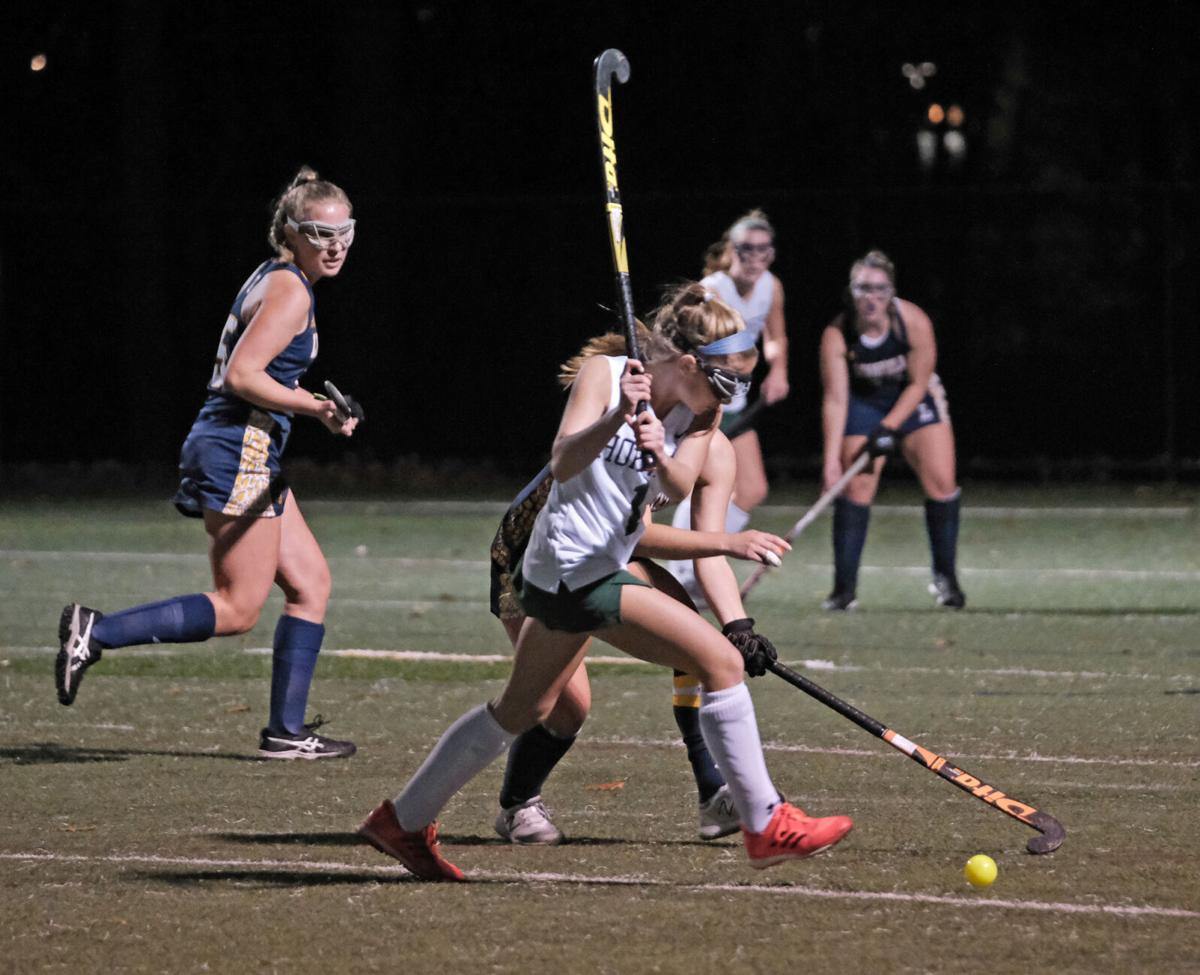 Manchester Essex’s Caelie Patrick winds up for a shot down the filed in Saturday’s Division 4 Quarterfinal against Lynnfield. 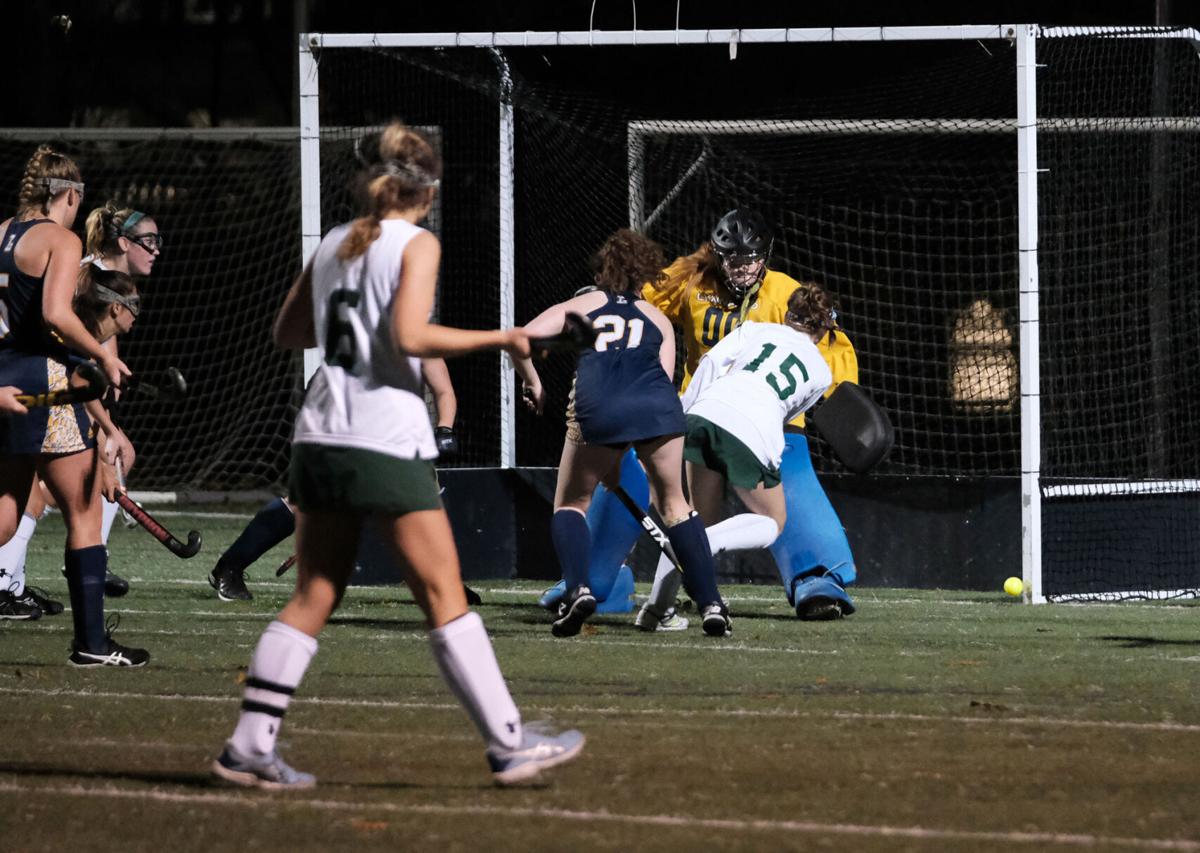 Manchester Essex’s Elsa Wood’s shot rings off the post in the first half of Saturday’s Division 4 Quarterfinal against Lynnfield. 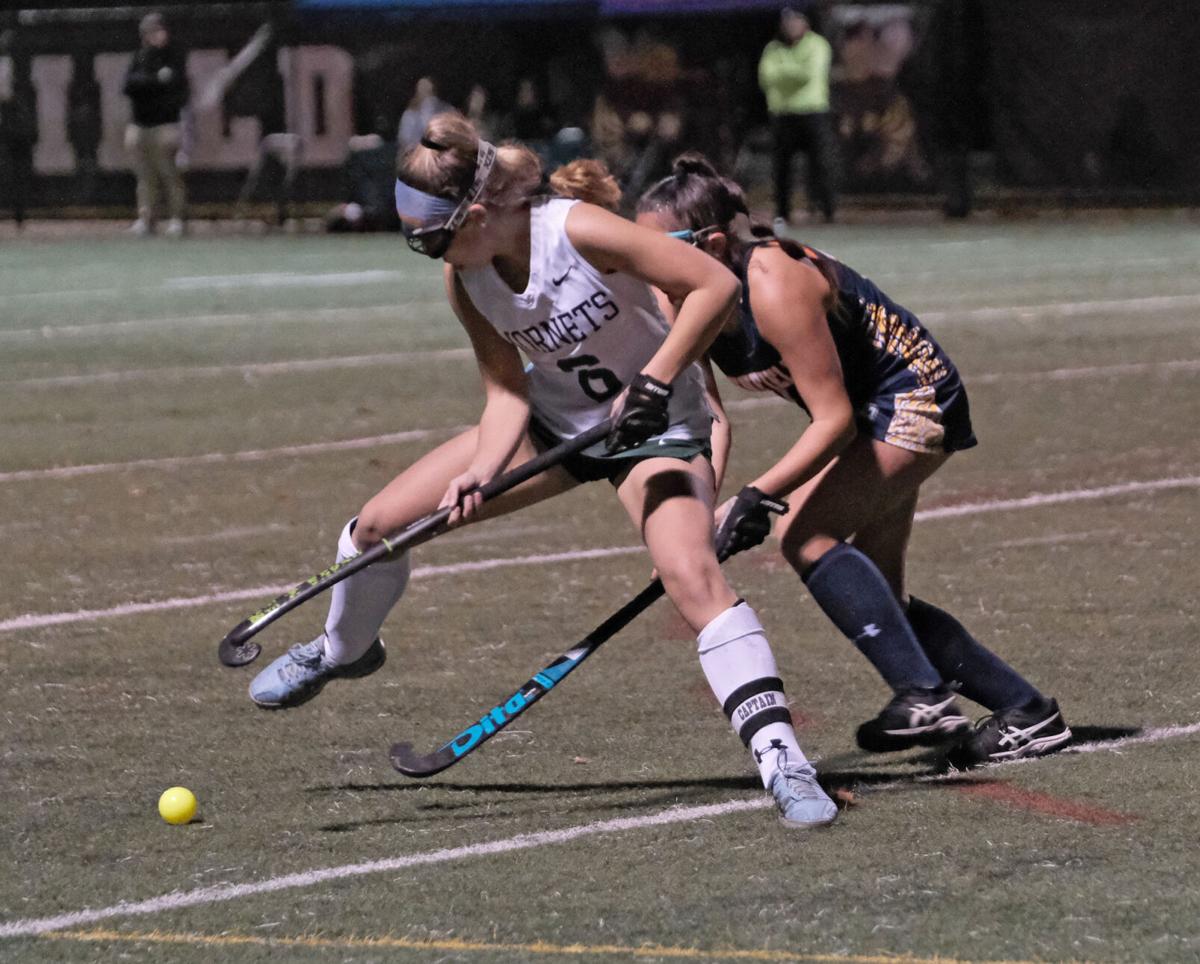 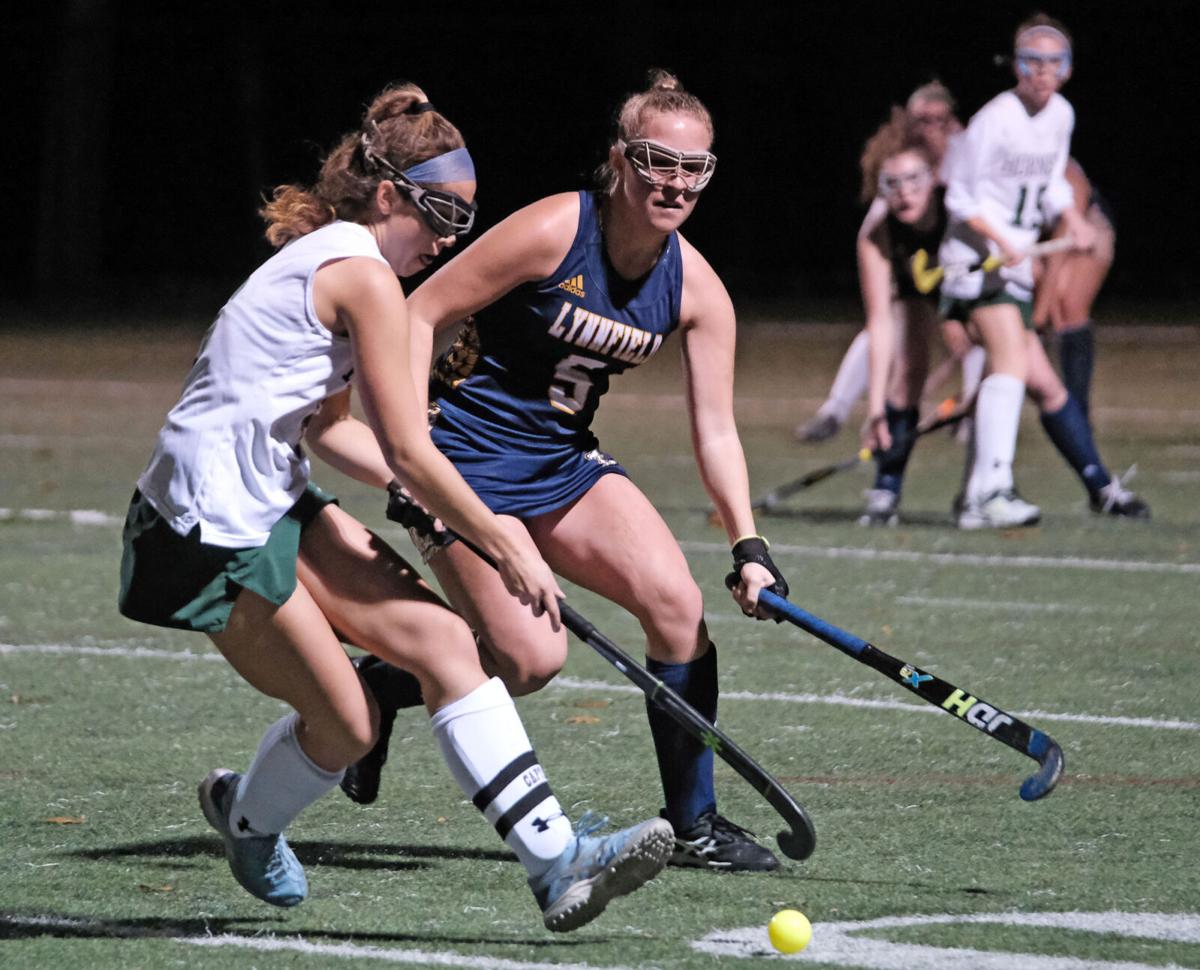 Manchester Essex’s Amy Vytopilova moves past Lynnfield’s Anna Kaminski in the first half of Saturday’s Division 4 Quarterfinal at Hyland Field.

Manchester Essex’s Caelie Patrick winds up for a shot down the filed in Saturday’s Division 4 Quarterfinal against Lynnfield.

Manchester Essex’s Elsa Wood’s shot rings off the post in the first half of Saturday’s Division 4 Quarterfinal against Lynnfield.

The second-seeded Hornets have found success this season with an aggressive, possession based style that limits the opponent’s scoring chances by preventing them from possessing the ball. Manchester Essex played that style perfectly against Cape Ann League rival Lynnfield on Saturday night to the tune of a 1-0 win.

With the victory, Manchester Essex (16-4-1) advances to the Division 4 Semifinals on Tuesday against No. 3 Uxbridge at Watertown High School (7 p.m.) with the winner moving on to the State Finals.

“We like to say our best offense is our defense,” Manchester Essex head coach Courtney Brown said. “That’s our game and we really controlled the tempo today. We found a way to stop their free hits early on and we really limited their chances. I would have liked to score a few because we had a lot of chances but it was a great team effort against a team that is familiar with us.”

The Hornets smothering possession was on display from the start as they regularly won battles for loose balls and kept it out of the hands of the seventh-seeded Pioneers (9-7-5). Lynnfield had just two shots on Manchester Essex goalie Paige Garlitz and just one corner chance throughout the 60 minutes of play, compared to nine shots and eight corner chances for the Hornets.

The Lynnfield defense, however, kept Manchester Essex at bay throughout the first half despite consistent pressure from the home team. Manchester Essex hit the post in the opening quarter of play and had a few other quality chances that were stopped by a strong Pioneers defense.

Manchester Essex’s goal came at 2:38 of the third quarter on a play that has been a bit of a weakness for the team this season. The Hornets have struggled a bit to find goals on corner chances, but a perfectly executed corner led to the only goal of the night as Amy Vytopilova ripped a shot towards goal from the top of the circle that was redirected out of the air at the waist of Ella Chafe for the goal and a 1-0 lead.

“It was such a good feeling to execute that corner because we have struggled with those this season,” Brown said. “It was a great shot and a great deflection.”

With 2:04 to play in the third frame, the Hornets were hit with a major curve ball as inclement weather, including lightning, hit the area and forced a 70-minute delay.

When the teams returned, Lynnfield had a little more hop in its step as it closed out the third quarter well and generated its best offense early in the fourth quarter as a great centering pass led to an open shot out front, but the shot went wide.

“That was a tough break for us because they really got the chance to regroup and their season was on the line so they came out hard on the restart,” Brown said. “But I was really proud of the way we handled it and then went back to playing our game.”

The Manchester Essex possession took care of the final 13 minutes. Led by the play of Vytopilova and Caelie Patrick in the midfield along with Phileine DeWidt and Helaina Davis at the wing back spots, the Hornets were able to shut down any scoring chances the rest of the way to earn the win.

“Amy and Caelie always seem to find a way to dominate in the middle of the field and getting us quickly into transition was key today,” Brown said. “But this was a total team win, everyone did their job. We’re looking forward to the Semifinals now, this is such a great accomplishment for a team that does not have a senior on the roster. To make it this far without senior leadership says a lot about their character.”