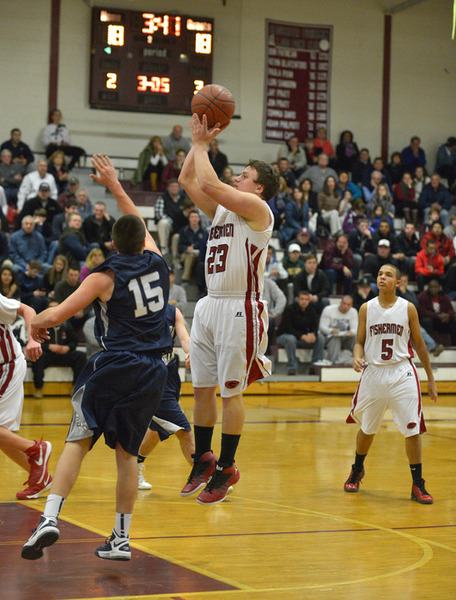 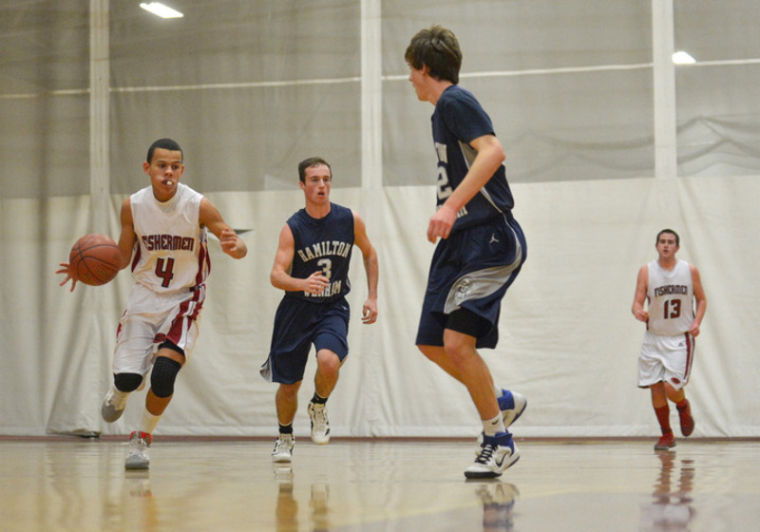 GLOUCESTER -- Bill Cahill knew he had a mismatch in the paint when his Gloucester boys basketball team opened up the 7th Annual BankGloucester Holiday Tournament against Hamilton-Wenham last night.

Cahill exploited that mismatch early and often last night. Knowing that the Generals had no answer for burly center Drew Shairs, Cahill went to him early and often, forcing Hamilton-Wenham’s perimeter defenders to crash down, which in turn opened up Gloucester’s outside shooters.

Behind a well-rounded attack led by Shairs’ 16 points and nine rebounds and a sound, aggressive defensive night, the Fishermen doubled their win total from a year ago with a resounding 58-41 win in front of a packed house at Gloucester High School.

With the win, the Fishermen move on to face Manchester Essex in the tournament final tonight (7:30) after the Hornets rolled past Bishop Fenwick in last night’s first game.

“The strategy was to get the ball inside,” Cahill said. “We had a mismatch with Shairsy, so we went to him three or four times, and that opened things up. We’re a good slashing team, so from there, we were going to the basket well and we hit our shots. It’s a good win.”

“It was hard,” Hamilton-Wenham coach Doug Hoak added. “We don’t have anybody to match up with (Shairs), and he had a nice game around the basket. That was definitely a problem for us.”

While Gloucester’s dominance in the paint was the story of the night, the game may have taken a far different turn if it weren’t for a defensive switch by Cahill early in the game.

The Fishermen (2-3) opened last night in a man-to-man set, and were shredded fairly easily by the Generals in a back-and-forth first quarter.

From there, though, Cahill switched into a 3-2 zone, and the Fishermen cruised from there. Hamilton-Wenham scored just three points in the second quarter after a plague of turnovers, and Gloucester kept that momentum rolling into the third.

Gloucester outscored Hamilton-Wenham 23-11 between the second and third quarters, utilizing an inside-out attack with Shairs and Jason Vizena (10 points), Austin Davis (eight points) and Jeff Oliveria (seven points) on the perimeter to pull away.

“We didn’t shoot the ball well in the first half,” said Hoak, whose team was led by Henry Eagar’s 15 points. “I thought we got good shots in the first half and we missed a lot of easy looks, and in the second half, I don’t know if we just lost confidence a little bit or what. Then Gloucester turned up the pressure and we just didn’t play with confidence.”

The Generals (1-3) will square off with Bishop Fenwick in the tournament’s consolation game tonight at 6:00, immediately followed by the Gloucester/Manchester Essex tilt. The Fishermen/Hornets matchup appears to be a good one. Both teams look to run the floor, and Manchester Essex’s size advantage will likely be off-set by Gloucester’s perimeter speed.

And after the Hornets handed Gloucester an 80-43 loss in the tournament final last December, there’s little doubt the Fishermen will be looking to put that debacle behind them.

“They’re run-and-gun, they shoot a lot of threes and they’ll have a size advantage,” Cahill said of Manchester Essex. “I think we can match their speed. This was a good win for the kids tonight. It’s good for their psyche going into tomorrow.”