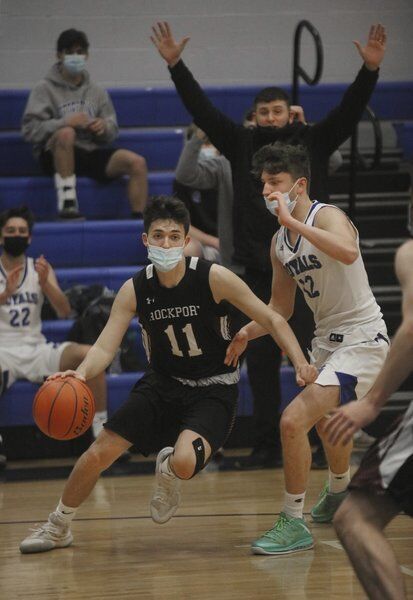 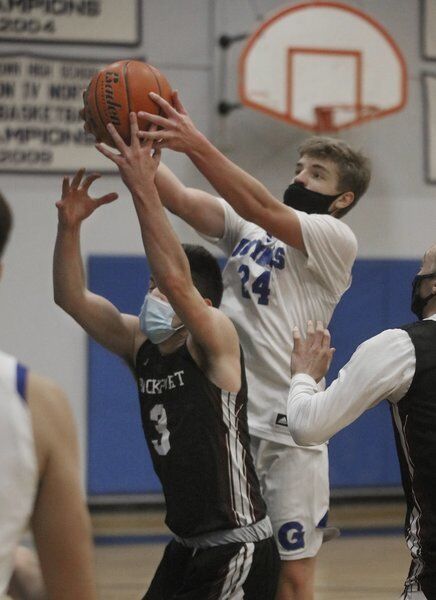 MIKE SPRINGER/Staff photoGeorgetown's Grant Lyon goes up for a rebound over Rockport's Austin Matus in Tuesday's game in Georgetown.

MIKE SPRINGER/Staff photoGeorgetown's Grant Lyon goes up for a rebound over Rockport's Austin Matus in Tuesday's game in Georgetown.

The Royals and Vikings got together at the last minute for Tuesday's season opener, and it ended with the host Royals pulling away for the win.

Rockport was initially scheduled to play Amesbury on Tuesday and Georgetown Pentucket, but Amesbury went on a two-week pause of all athletic activities and Pentucket had a positive COVID-19 test, causing the CAL Baker rivals to link up.

Given the circumstances surrounding the game, Rockport coach Phil Whitley wasn’t going to complain about his team falling short.

“It was great to have a game, obviously any time we’re in the gym is a gift at this point,” Whitley said. “I think [we were] a little rushed, a little jitters, some fatigue with the masks and whatnot but the guys played hard.

“Kudos to them,” he continued. “[They] stuck with it, started moving the ball inside the post on us and started getting easy buckets towards the second half, but I’m pleased with just being here, that’s a win just being here in the gym with all these other schools getting shut down and everything.”

Rockport's Kyle Beal led all scorers with 16 points on four three-pointers, Bowen Slingluff had 10 and Austin Matus 6. The Vikings trailed by just two, 22-20 at the break, but a 7-0 Royals run early in the third put them ahead for good.

Rockport is back in action on Friday at home against Triton (5:45 p.m.).

The Hornets move to 1-0 with the win in a back-and-forth contest on the road. Manchester Essex jumped out to an early lead, taking a seven-point lead into the half. The Pioneers cut it to one heading into the fourth but the Hornets held them off down the stretch for the win.

A.J. Pallazola and Gavin Glass led the way with 14 points each, Frank Wood chipped in eight.

The team returns to action on Friday at home against Ipswich (6 p.m.).