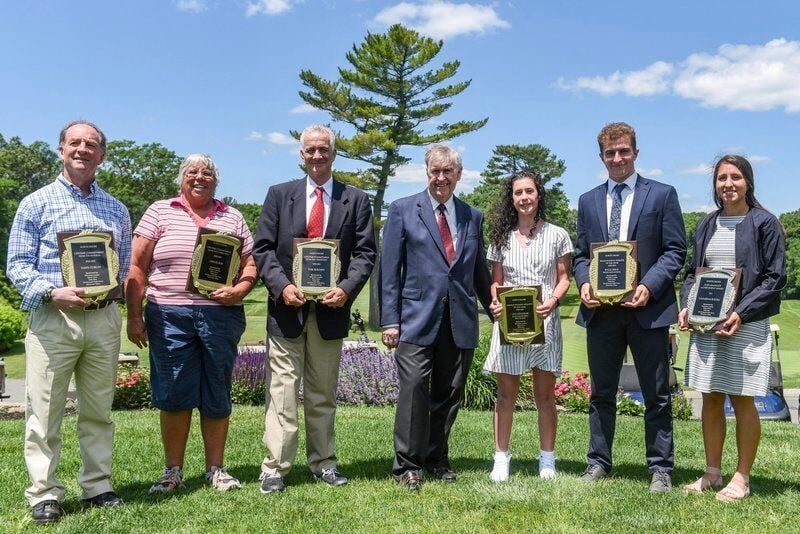 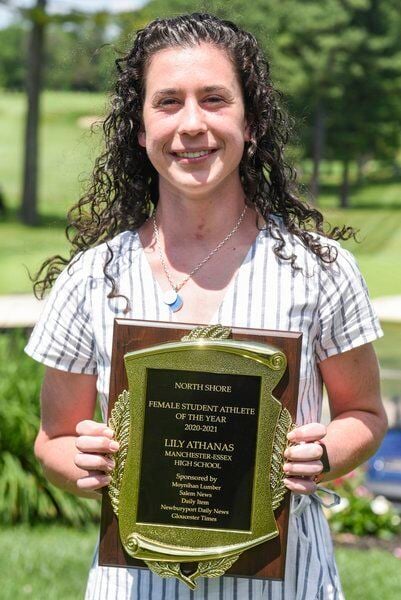 PEABODY — Two of the finest student-athletes on the North Shore were recognized for their incredible accomplishments on Wednesday, as Triton’s Kyle Odoy and Manchester Essex’s Lily Athanas were honored as this year’s Moynihan Lumber Student-Athletes of the Year.

The annual banquet, which made its return to Salem Country Club after a one-year pandemic-induced hiatus, celebrated the two Cape Ann League superstars, both three-sport athletes who have ranked among the region’s top all-around performers throughout their high school careers.

The two now join a club that includes past winners like Olympic runner Shalene Flanagan of Marblehead, Boston University softball coach Ashley Waters of Amesbury and All-American track star Catarina Rocha of Peabody, who was also on hand to present Odoy and Athanas with their awards while being honored with the program’s Post-Graduate Achievement Award.

One of Cape Ann’s top three-sport athletes, Athanas stars in field hockey, basketball and lacrosse for Manchester Essex. This past fall she earned CAL Baker Player of the Year honors for field hockey and the outright league title, and over the winter she earned All-CAL honors as a standout guard for the Hornets.

“In my 17 years of coaching and teaching, it would be difficult for me to find a student more deserving of this honor,” said Manchester Essex girls basketball coach Lauren Dubois, who introduced Athanas at the banquet. “As a student Lily is curious and conscientious, she truly enjoys learning, and as an athlete she is dedicated and competitive and loves the game.”

Athanas has found her greatest success on the lacrosse field, helping Manchester Essex to a Division 2 North title and Division 2 State Finals as a sophomore in 2019, where she was an All League performer, before leading the Hornets to a 7-4 season this spring as a senior captain. Following her graduation Athanas will play Division 1 college lacrosse at Georgetown University, where she plans to study science.

“It’s a huge honor and looking at the list of people who earned the award the years before me, it’s an honor to be considered a part of that group because those people are so inspirational and honorable,” Athanas said on Wednesday. “I never thought I’d be considered the same caliber as them.”

A standout football, basketball and baseball player, Odoy leaves as one of Triton’s most accomplished student-athletes of the past decade. This past Fall 2 season Odoy earned CAL Kinney Co-Player of the Year honors as Triton’s quarterback, bouncing back from a series of shoulder injuries that limited him throughout to emerge as one of the area’s most prolific players.

Odoy led Greater Newburyport with 586 yards on 62 of 107 passing (57.9%) and four touchdown passes while also tallying 393 rushing yards and six rushing touchdowns on a team-high 94 carries. He tallied 36 points on the season, and though Triton finished 0-5 Odoy ensured the Vikings were competitive in every game, nearly leading the Vikings to an upset of Lynnfield in an eventual 30-22 double overtime loss in the season finale.

He was alsoa CAL All-Star in baseball. He served as team captain in all three sports, ranks as one of the top students in his class and has earned acceptance to the U.S. Naval Academy, which admits fewer than 10% of applicants in a given year.

With his selection, Odoy becomes the second straight Triton athlete to earn Moynihan Student-Athlete of the Year honors, and the third straight from Greater Newburyport following Godfrey and Newburyport’s Sam Acquaviva in 2019.

“It means so much, coming here looking at that program and seeing that list of names and all the people who have come before me and what they’ve done, it’s an honor to even be mentioned in the same breath as them,” Odoy said afterwards. “I’m so thankful to Mr. Moynihan for all the support he’s shown and what he’s given me and I couldn’t be more thankful.”

In addition to the Student-Athlete award recipients, several other pillars of the North Shore athletic community were also recognized on Wednesday. Among them, longtime Rockport boys soccer coach Dave Curley received the Lifetime Commitment Award (Schools). Curley retired after more than three decades as head coach of the Rockport boys soccer program. As the smallest school in the league he led the Vikings to several Cape Ann League titles and the Division 3 North championship in 2010, Rockport's only sectional championship in school history.

Jack Moynihan, subbing in for his brother and program founder Gerard, delivered the opening remarks and Paul Halloran served as Master of Ceremonies.