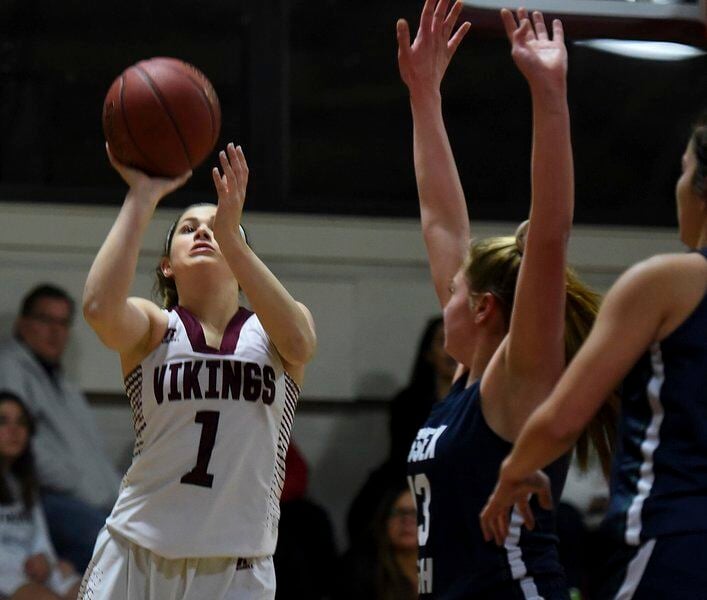 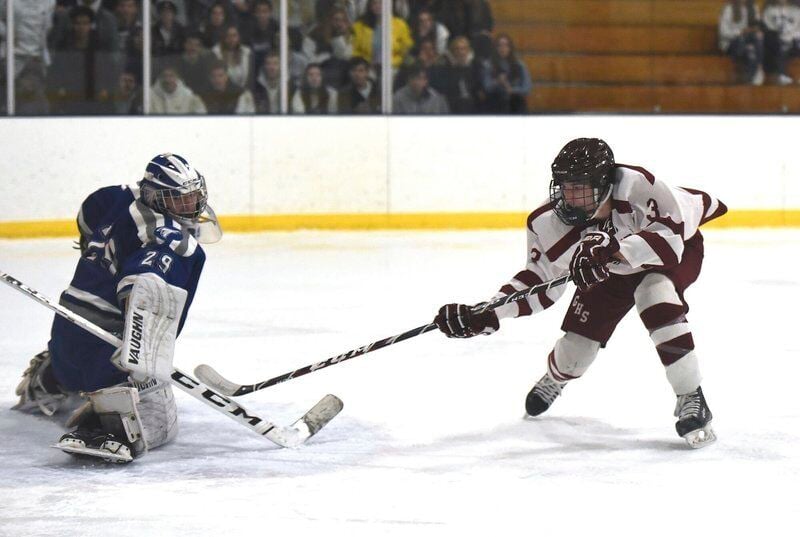 PAUL BILODEAU/Staff photoE.J. Field scored the game winner for Gloucester hockey in a January meeting with Danvers at Talbot Rink.

PAUL BILODEAU/Staff photoE.J. Field scored the game winner for Gloucester hockey in a January meeting with Danvers at Talbot Rink.

What makes a great game? Is it a nail-biting, back-and-forth contest? A fantastic finish? Or an incredible team performance?

Whatever the criteria, Gloucester, Rockport and Manchester Essex high school sports teams turned in many memorable contests in all sports over the 2020 school year.

Hockey 3, Danvers 2; January 15: After a half decade in the Northeastern Conference South Division, Gloucester hockey moved back to the North last winter, meaning it would meet its most storied rival twice a season once again. The January meeting at the Talbot Rink did not disappoint.

Danvers dominated the first two periods and went into the third leading 2-0, when Gloucester mounted a big comeback. Jeremy Abreu put in a power play goal with 3:40 to play and E.J. Field notched the game-winner with 1:03 to play on a rebound after a Jack Costanzo breakaway for a pulse pounding, 3-2 win.

Boys basketball 83, Wakefield 71; Division 2 North First Round, February 24: The Fishermen were the No. 7 seed in the section and hosting a very solid No. 10 seeded Wakefield team out of the Middlesex League. What ensued was a fast paced, back-and-forth affair that saw Gloucester pull away with a great fourth quarter effort.

The Warriors were on fire early on, knocking down 11 of their first 13 shots in the first and second quarters to lead by as much as 10 points. Gloucester, however, chipped away and tied the game by halftime then sealed the win with a 17-2 fourth quarter run to turn a three-point lead into an 18-point lead. Marcus Montagnino had 28 points, Byron Thomas 21 and Zach Oliver 20.

Field Hockey 1, Danvers 0, November 3: Gloucester and Danvers were once again battling near the top of the NEC this fall and they turned in a nail-biter in a November meeting at Deering Stadium. The Falcons easily handled the Fishermen in a 3-0 win at Newell Stadium earlier in the season, but Gloucester was a different team in the second meeting.

Ella Marshall scored the lone goal of the game in the first half and goalie Mia Wheeler made several big stops in the second half to earn the shutout.

Girls basketball 53, Lynn Tech 36; Division 4 North First Round, February 25: This game wasn't the most competitive contest, but it highlights an outstanding team performance and a historical win for the program. The Vikings rolled to their first state tournament win in girls basketball since the 1980's.

Rockport was the No. 7 seed in Division 4 North and throttled the No. 10 seed early on in the First Round tilt at the Rowell Gymnasium. The Vikings opened up a 15-2 lead, which eventually grew to 30-12 by halftime, allowing the home team to cruise in the second half. Kylie Schrock had 21 points inculding the first 13 of the night, Lauren Ryan chipped in 17.

The match came down to the final shot on the final hole as Rockport's No. 8 golfer, Roy Gebhardt IV, polished off a 21 point outing to clinch the league title. Jack Cahill's 30 points led all scorers while senior Ethan Andersen sunk a 40-foot putt on his last high school shot, a putt that proved to be a key shot in the victory.

Boys soccer 0, Lynnfield 0; November 10: To clinch their first CAL Baker title since 2013, the Vikings had to deal with the CAL Kinney champion Pioneers and a little adversity as head coach Dave Curley was serving a one-game suspension due to a maskless team photo taken after the team's previous game.

Instead of letting the adversity get the best of them, the veteran laden team put together one of its best performances of the year, a back-and-forth scoreless draw against a top notch opponent. Lynnfield controlled the first half, but Vikings keeper Camden Wheeler made a few nice saves to keep it scoreless. Rockport turned the tide in the second half but the Lynnfield defense came up big as well. The Vikings earned that league championship in every way.

Boys basketball 76, Bishop Fenwick 74 in double overtime; January 5: Nothing beats the excitement of a back-and-forth hoop game and this one certainly delivered when it came to the drama.

Both teams had chances to finish this one off but both defenses responded with big stops. In the end, Jack Shaw came up big in the clutch as his jumper tied the score late in the first overtime and his put-back in the final seconds of the second overtime clinched the win. Shaw had 21 points, Kellen Furse led the Hornets with 29.

Field hockey 2, Newburyport 1; October 20: The Hornets most impressive win in its run to the outright Cape Ann League championship this fall came on senior night with a one-goal win over the eventual CAL Kinney champion Clippers.

The Hornets controlled for most of the game with Cailie Patrick delivering both goals in the victory. The defense then held off a late Clippers charge to seal the win. While impressive at the time, it ended up being the game that decided the outright league championship.

Boys Soccer 2, Pentucket 1; November 7: The Hornets finished up the abbreviated 2020 season with their best all around performance of the season.

Pentucket led 1-0 in a dominant first half performance, but the Hornets, who were at the time playing to stay alive in the CAL Baker race, turned in an outstanding second half to snatch the win. Naderson Curtis converted a fourth quarter penalty kick to tie the game and then picked the top right corner from the top of the box for the game winner.