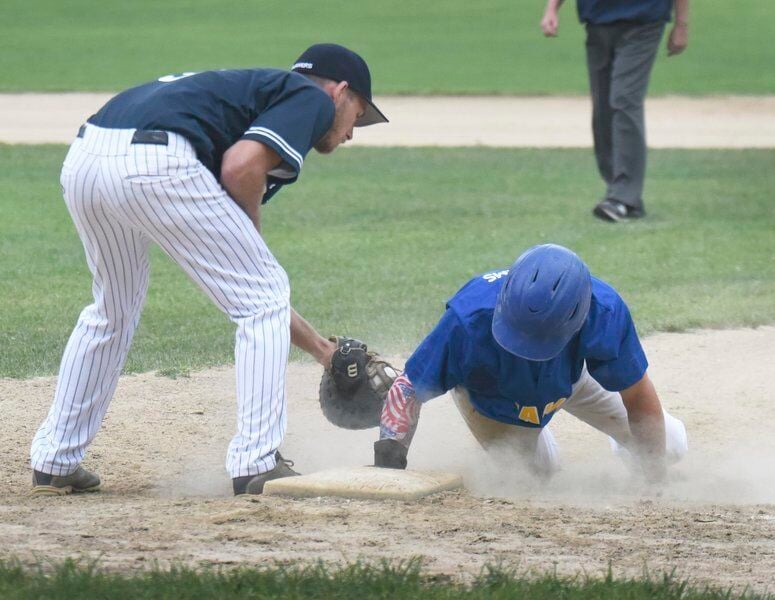 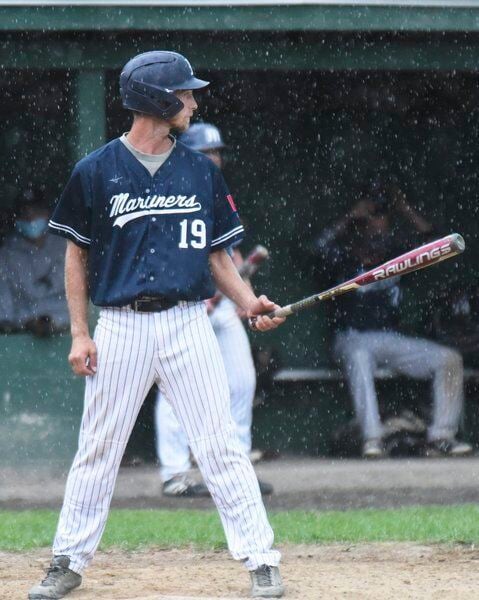 BRYAN EATON/Staff photoManchester's Mike Cain gets ready to bat as the rain starts falling in Game 1 of the ITL Finals on Wednesday in Rowley. 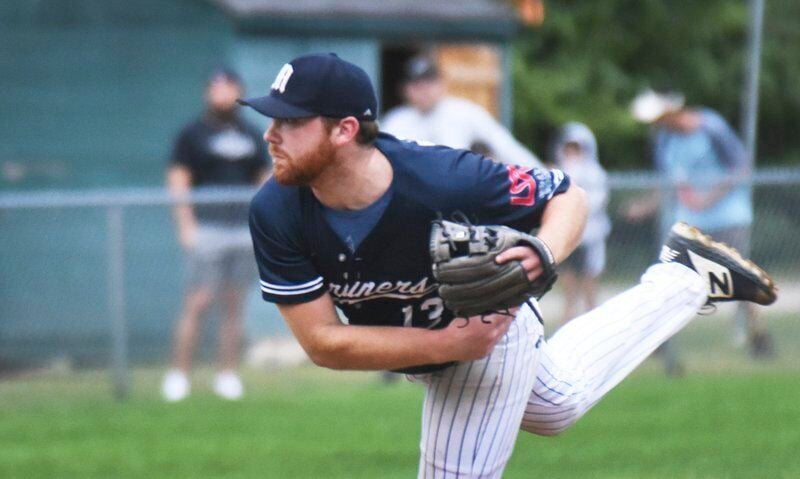 BRYAN EATON/Staff photoManchester's Mike Cain gets ready to bat as the rain starts falling in Game 1 of the ITL Finals on Wednesday in Rowley.

ROWLEY —Justin Bolla didn’t think he’d got enough of it. The Rowley Rams slugger made his way down the line expecting the outfielder to make the routine catch, when suddenly he realized the outfielder was still backpedaling closer and closer to the wall.

“It just kind of kept carrying,” he said.

The ball wound up bouncing off the wall in left center for the first of Bolla’s two consecutive RBI doubles, helping provide the early spark to what turned out to be a decisive 6-2 win for the Rams over the Manchester Essex Mariners Mariners in Game 1 of the Intertown Twilight League finals on Wednesday.

Bolla powered Rowley’s offense in the first and third innings. His first came after a Richie Williams lead-off single and sacrifice bunt by C.J. Ingraham. The second was an opposite field blast that also bounced off the wall in right-center, and Bolla came in to score shortly afterwards on an RBI single by Anthony Conte to make it 3-0.

“He’s really locked in,” said Rowley Rams manager Jeff Wood. “When Bolla starts hitting the ball the other way and driving it the way he did, he’s just a really tough out. He’s put a lot of work into the player he is and it shows, he’s a really great hitter.”

The Rams nearly broke the game open multiple times from there, but the defending champion Mariners proved their mettle by escaping bases loaded, one-out jams in both the fourth and fifth innings with relatively little damage. Mariners pitcher Peter Clark got out of the fourth inning jam unscathed after turning a 1-2-3 double play, but Rowley was able to tack on two more runs in the fifth with RBI singles by Conte and Joe White before the Mariners got out of the inning.

Trailing 5-0, Manchester responded with its best inning of the game in the top of the sixth. Kellen Field and Adam Philpott started the inning with a single and walk, and Mike Cain scored Field on a sacrifice fly to put the Mariners on the board. Caulin Rogers (2 for 3) followed that with an RBI single, but Rowley pitcher Dylan Copeland shut the door from there, escaping the inning without further incident while finishing the complete game win with a scoreless seventh.

“That’s always been the best team in the league, so any time you can come in Game 1 and beat them that’s big to get that advantage,” Bolla said. “We’ve been swinging the bats great, playing defense great so we’re hot right now, we’re just riding the momentum, and one through nine everybody is doing their work.”

Game 1 briefly went into a lightning delay after a thunderstorm rolled through in the second inning, but the game was able to resume without further incident after approximately 15 minutes. Rowley now leads Manchester 1-0 in the best-of-five championship series, which will resume Thursday night in Essex at 5:30 p.m.

Conway - Faye (Wonson) Anderson passed away in her home in Conway, S.C., of a complication from surgery. Faye was born in Gloucester, Mass., on June 18, 1952. She was the daughter of Fletcher and Evelyn Wonson. A graduate of Gloucester High School, Faye married her husband of 51 years, Gary …