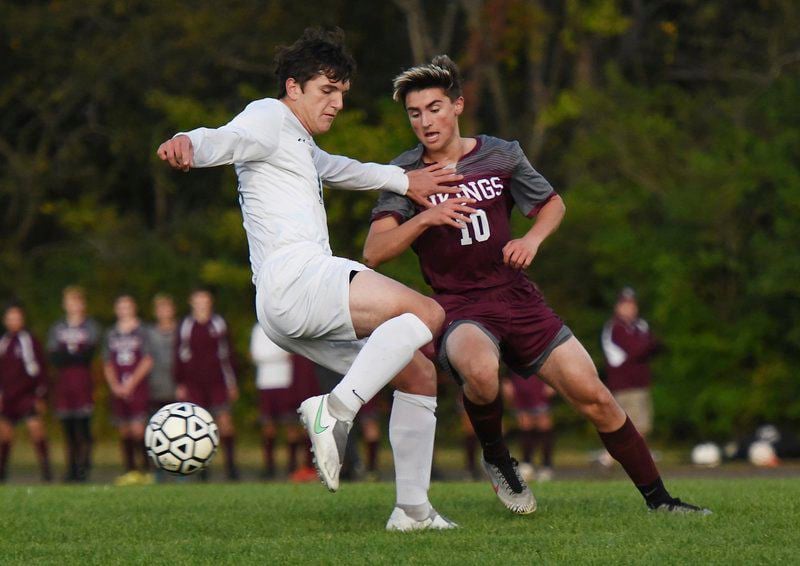 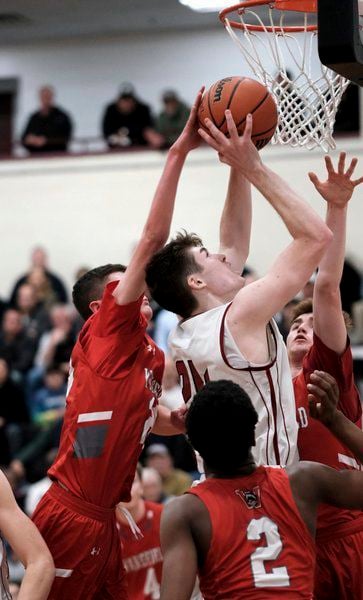 Kirk R. Williamson PhotoMarcus Montagnino and the Fishermen weathered an early storm and eventually pulled away from Wakefield in a February tournament game. 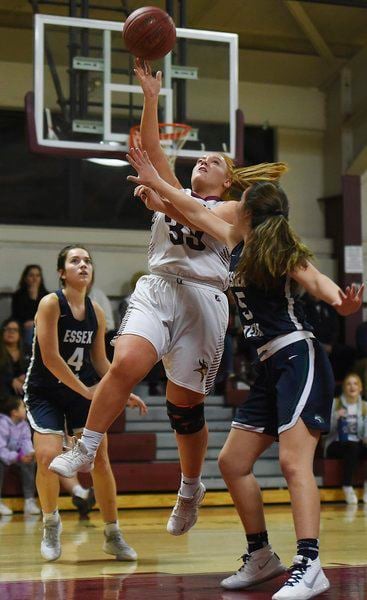 PAUL BILODEAU/Staff photoLauren Ryan and the Vikings made history with a state tournament win over Lynn Tech in February.

Kirk R. Williamson PhotoMarcus Montagnino and the Fishermen weathered an early storm and eventually pulled away from Wakefield in a February tournament game.

PAUL BILODEAU/Staff photoLauren Ryan and the Vikings made history with a state tournament win over Lynn Tech in February.

There were some seriously good games involving Cape Ann teams this school year in terms of close competition and significant moments. Here's a look at the best, in no particular order.

Gloucester field hockey 2, Danvers 0, Division 2 North Quarterfinals: Danvers was a serious thorn in the side of the Gloucester field hockey team in the 2019 regular season. The Falcons ended the two-time defending NEC champion Fishermen's reign as conference champs. They also beat them twice in two meetings.

That all changed when the stakes were at their highest as No. 6 Gloucester delivered a season defining performance in an "upset" win at No. 3 Danvers.

The Falcons came out and dominated the opening moments of the game. But Gloucester's defense held strong, holding off over a dozen corner chances in the first half. Fishermen goalie Mia Wheeler stuffed a Danvers penalty stroke late in the first half, and that changed the tide. Mia Salah found the back of the net to give Gloucester a 1-0 lead and then Maddie Machado scored early in the second to make it 2-0.

Gloucester controlled the rest of the way to reach the semifinals, surviving some tense moments early and growing stronger as the game wore on.

Rockport boys soccer 2, Manchester Essex 2: It's always an absolute battle when Rockport and Manchester Essex meet on the pitch, and the 2019 season was no different as the rivals tied twice in the regular season en route to deep tournament runs for both squads.

This September meeting was a highly entertaining, back-and-forth affair with state tournament intensity.

Rockport took total control of the game just 13 minutes in on goals from Frew Rowen and Colby Kelly. The defense held the Hornets off for a while, but Manchester Essex pushed hard in the second half.

Kai Carroll made it 2-1 early in the second half and Kellen Furse tied the score on a header in the final minutes to make it a draw.

Gloucester hockey 3, Danvers 2: One of the most storied rivalries on the North Shore in any sport delivered a classic contest at Talbot Rink in January.

Danvers actually controlled the action for the vast majority of the night, but the Fishermen showed some serious heart and hustle, battling back late to earn an impressive victory.

The Falcons held a 25-13 edge in shots on goal through two periods and had a 2-0 lead, only to see Gloucester come roaring back. Harry Marshall scored early in the third to get Gloucester back in the game, and then Jeremy Abreu tied it up while on the power play in the final five minutes.

The Fishermen got the game-winner while shorthanded as Jack Costanzo's breakaway was initially saved, but senior captain E.J. Field was there to slap the rebound inside the right post with 1:03 to go to give his team a dramatic victory.

Rockport girls basketball 53, Lynn Tech 36: This one didn't have the drama that most of these games had, but it was an impressive performance from the Lady Vikings and a historic moment. Rockport had not hosted a tournament game in a long time, and had not won a tournament game in multiple decades until the late February game at the Rowell Gymnasium.

With the home crowd buzzing, Rockport broke out to a 15-2 lead and never looked back, blowing away the Tigers in a game that actually was not as close as the final score indicates.

Kylie Schrock had 29 points in the win, senior captain Lauren Ryan chipped in 17.

Manchester Essex girls soccer 1, St. Mary's 0, Division 4 North Quarterfinals: The third-seeded Hornets faced a tough draw in the second round of the tournament with No. 6 St. Mary's coming to Hyland Field, quite possibly the only other team in the bracket that could match the schedule of the Cape Ann League qualifiers.

This was a tense one.

Dasa Hase found the back of the net just two minutes into the game, and that was enough for Manchester Essex to come away with the win. The Hornets defense stepped up in a big way over the final 78 minutes, holding a talented Spartans squad scoreless for the well earned victory.

Gloucester boys basketball 83, Wakefield 71, Division 2 North First Round: The first round tournament tilt at the Smith Field House was a very entertaining game that was nip and tuck just about the entire way.

No. 10 Wakefield came out on fire, knocking down 11 of its first 13 shots from the field to take a double-digit lead early in the second quarter.

Gloucester, however, did not panic as it kept playing hard on both ends of the floor and chipped away at the lead. Eventually, the Fishermen pulled away thanks to a 17-2 fourth quarter run, turning a three-point lead into an 18 point lead in the final frame.

Gloucester had three 20-point scorers on the night with Marcus Montagnino scoring 28, Byron Thomas 21 and Zach Oliver 20. The Fishermen showed off some serious mental toughness to weather the early storm and eventually take control.

The Hornets and Crusaders could not shake each other all night in the January clash as they traded off leads and momentum in spurts with neither team building a comfortable lead at any moment.

Fenwick led by as much as 10, but Manchester Essex kept coming back, eventually forcing overtime. Fenwick had a lead in overtime, and Manchester Essex again came back to tie. The Hornets trailed late in double overtime as well, but finished off on a 6-0 run to snatch an impressive victory in.

Kellen Furse had 30 points to lead Manchester Essex, Mason Paccone had 18 while Jack Shaw had a big three-point play on a tip-in to help his team take the lead in the second overtime frame.

Rockport hockey 2, Shawsheen 1: Rockport hockey's best win of the season came against its nemesis in the Commonwealth Conference in Shawsheen Tech. The Vikings were the only team to knock Shawsheen in CAC action this past winter, and it came with an impressive performance at the Talbot Rink in January.

Shawsheen controlled early, but a goal from John Andrew gave Rockport a lead and much needed momentum.

Andrew added another clutch goal just 13 seconds into the third and the Vikings defense held off a late Shawsheen charge for a huge win, which ultimately led to a big hot streak and a state tournament berth.

Gloucester boys soccer 1, Beverly 0: Both Gloucester vs. Beverly boys soccer games could have made this list, but we will go with Gloucester's most impressive win of the season, a 1-0 road win in October over an incredibly entertaining 4-4 tie in September at Newell Stadium.

The Panthers won the NEC North last fall, but they could not beat the pesky Fishermen, who proved they could win in multiple ways.

Gloucester earned its reputation as an offensive team that could light up the scoreboard with regularity. But on this day it was the defense that shined against a high powered offense.

Robert Mugabe scored for Gloucester just three minutes in and that goal held the rest of the way. Max Sperry made several big stops in net while Jack Patten, Richard Jabba and Carlos Martinez played great in front of him.