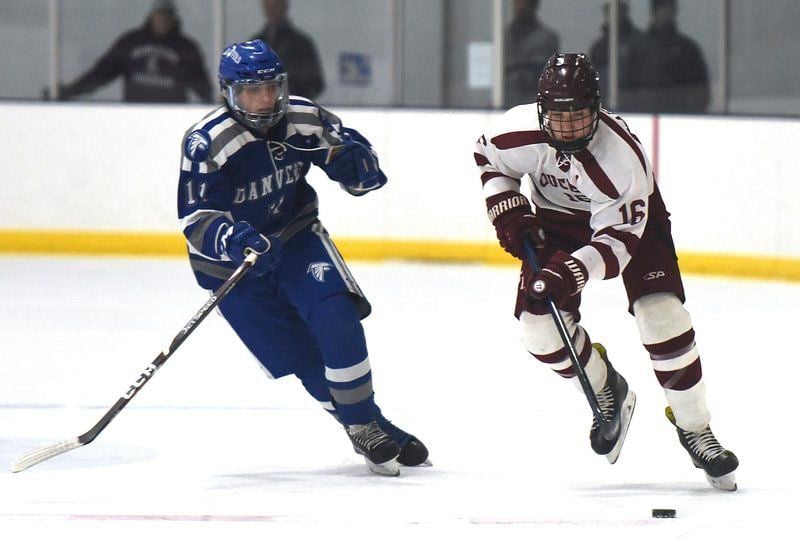 PAUL BILODEAU/Staff photoGloucester's Jeremy Abreu takes the puck up ice past Danvers' Tyler Robinson in Wednesday's game at Talbot Rink. Abreu had a goal in a 3-2 Fishermen win. 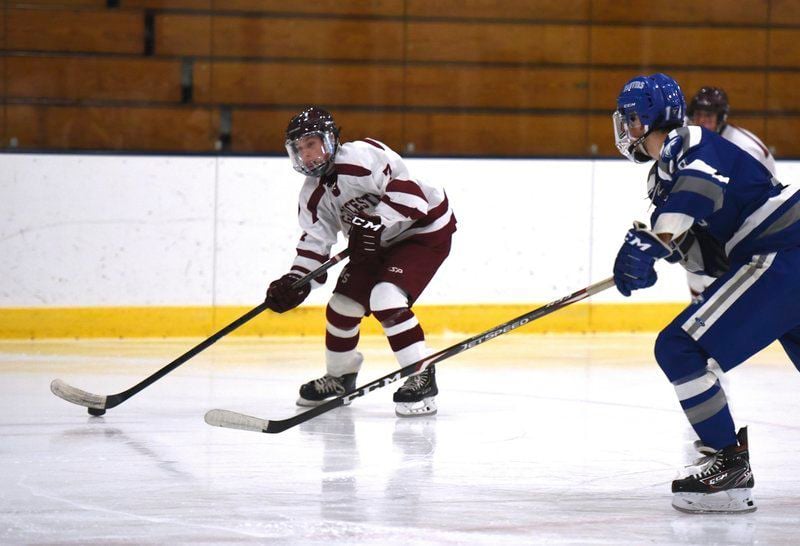 PAUL BILODEAU/Staff photoGloucester's Jack Delaney looks to put the puck on net from the right circle in Wednesday's game against Danvers at Talbot Rink. 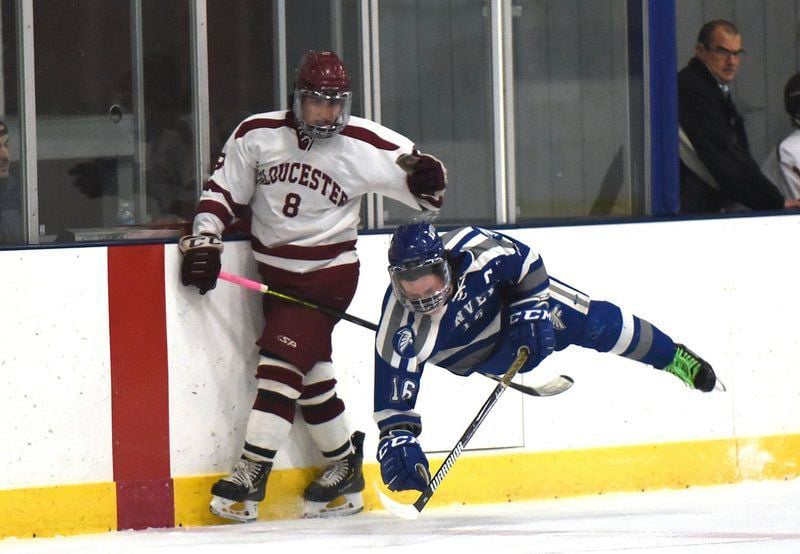 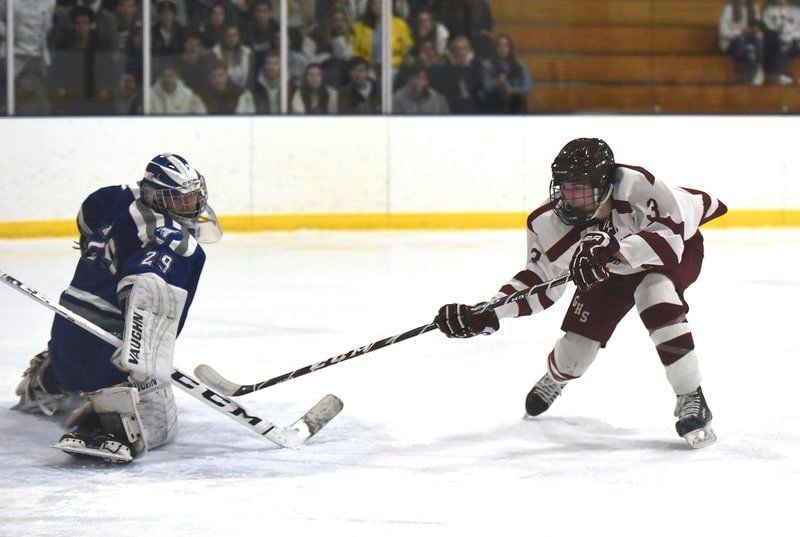 PAUL BILODEAU/Staff photo. Gloucester's E.J. Field goes in on a breakaway against Danvers goalie Adam Bridgeo. The Falcons net minder made the save on the play but Field would end up scoring the game-winning-goal for the Fishermen with 1:03 to play.

PAUL BILODEAU/Staff photoGloucester's Jeremy Abreu takes the puck up ice past Danvers' Tyler Robinson in Wednesday's game at Talbot Rink. Abreu had a goal in a 3-2 Fishermen win.

PAUL BILODEAU/Staff photoGloucester's Jack Delaney looks to put the puck on net from the right circle in Wednesday's game against Danvers at Talbot Rink.

PAUL BILODEAU/Staff photo. Gloucester's E.J. Field goes in on a breakaway against Danvers goalie Adam Bridgeo. The Falcons net minder made the save on the play but Field would end up scoring the game-winning-goal for the Fishermen with 1:03 to play.

Through two periods of Wednesday's Northeastern Conference North clash against Danvers, it didn't look like it was going to be the Gloucester hockey team's night.

The visiting Falcons, powered by a great forecheck and an edge in physical play, took it to Gloucester for the opening 30 minutes and were in control of the ebb and flow on the ice and the scoreboard, taking a two-goal lead in the third.

The Fishermen, however, came roaring back in the third, scoring three times in the final 15 minutes with senior captain E.J. Field's shorthanded with 1:03 to play giving the Fishermen a 3-2 victory at the Talbot Rink.

The win was an important one for Gloucester, which moves to 5-4-2. Danvers falls to 5-6 and snaps a four-game win streak.

"We said coming in that this was going to be a game of character and that it was going to take all 45 minutes," Gloucester head coach Derek Geary said. "Danvers out-charactered us for two periods but we were at least even in the third and we manned up on one-on-one battles. Let's be honest, we stole it a bit, but we were there to make the plays when we needed to in the end and showed a lot of fight."

For the Falcons, it was a tough finish to a game they believe they should have won.

"We didn't put them away when we should have and it cost us," Danvers head coach Steve Baldassare said. "We played good positional hockey, but we let them back in it in the third and we started to get sloppy. We shouldn't have been in that position."

Leading 2-0 and nearly doubling up Gloucester in shots through two periods (25-13), the Falcons were in control until Gloucester got on the board just 2:36 into the final period.

Field skated down the left wing and threw a centering pass into traffic, which found the stick of Harry Marshall, who tapped it in for the goal to cut the deficit to 2-1.

Just under nine minutes later, Gloucester struck again while on the power play. After a face-off win, Jeremy Abreu got some room in the right circle and his wrist shot found the back of the net to tie it up at 2-2.

"Abreu has such a great shot and you saw it there," Geary said. "His move to forward has really invigorated his game and he keeps coming up big when we need him to."

Danvers regained a little momentum with just under two minutes to play when the Fishermen were whistled for a crosscheck, giving Danvers a power play for the remainder of the night.

The Falcons cycled the puck well on the man advantage but were hit with a little misfortune when a potential scoring chance on a well designed back door play ended up taking a big bounce off the pad of Gloucester goalie Connor Vittands (29 saves) that kicked out to Jack Costanzo, who went in alone on a breakaway.

Falcons goalie Adam Bridgeo made a nice stop on Costanzo's try, saving it with his mask, but the puck settled in the slot and Field was the next man in the zone. Gloucester's senior captain put it just inside the right post with a slap shot for what turned out to be the game-winning-goal.

"It was a tough bounce of the puck," Baldassare said. "Bridge made a nice stop but then the puck just stayed there right in the slot. It was a tough break but we let them hang around and gave them the momentum early in the period."

Geary was quick to praise his senior captain.

"In our biggest games, E.J. has been the one coming up with the big goals," Geary said. "He's such an energetic player and he rode that wave late in the game."

It was all Danvers in the opening two periods as the visitors had an answer for everything Gloucester threw its way for 30 minutes.

The first period was scoreless, but Danvers held an 11-5 edge in shots on goal.

In the second, the Falcons found the back of the net 3:14 in when Cal Mansfield put home a Brett Baldassare pass after a great forecheck in the offensive zone to make it 1-0.

Five minutes later, the Falcons got some insurance. Vittands made the initial save on a 2-on-1 break, but the puck stayed in the crease and Jimmy Thibodeau finished off the play for a 2-0 Falcons lead.

"We played two really strong periods to start," Baldassare said. "We were physical, we were disciplined and we did a good job stopping their rushes. We had a few more chances that we should have buried and we would not have been in this position."