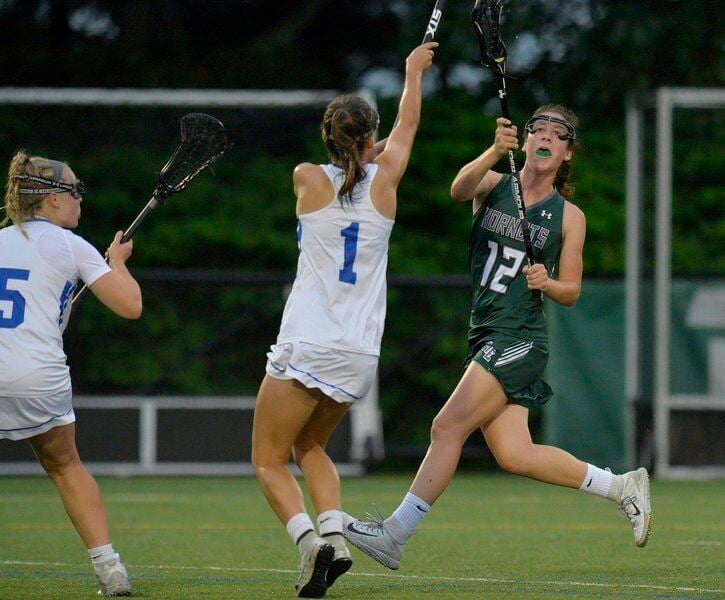 Staff File PhotoLily Athanas (12) is a standout midfielder for the Hornets who helped the team reach the Division 2 State Finals in 2019. 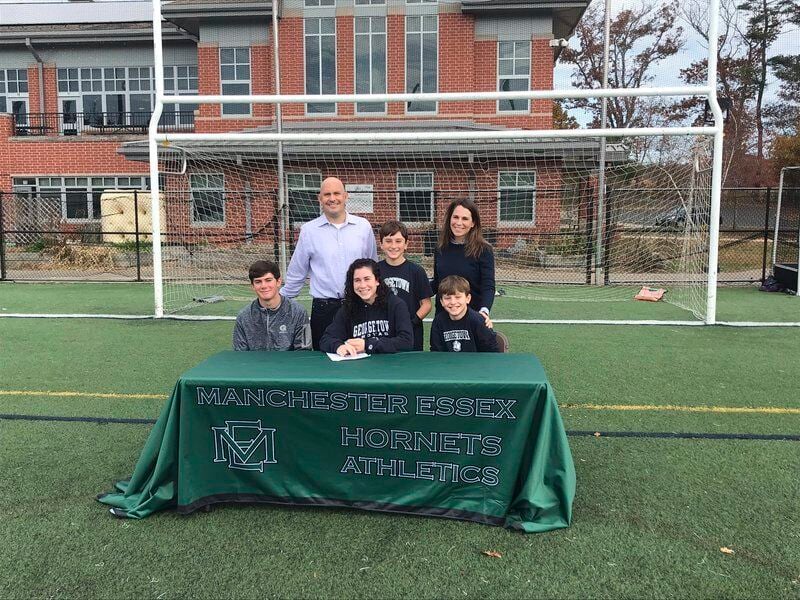 Courtesy PhotoManchester Essex's Lily Athanas (center) signs her letter of intent to play lacrosse at Georgetown University. She is seen signing her letter with her family; father Steve, mother Jennifer, brothers Sam, Will and Charlie.

Staff File PhotoLily Athanas (12) is a standout midfielder for the Hornets who helped the team reach the Division 2 State Finals in 2019.

Courtesy PhotoManchester Essex's Lily Athanas (center) signs her letter of intent to play lacrosse at Georgetown University. She is seen signing her letter with her family; father Steve, mother Jennifer, brothers Sam, Will and Charlie.

An athlete's junior season is considered one of the most important seasons for an athlete to garner some interest from college scouts.

Lily Athanas had her junior high school lacrose season cancelled this past spring due to the COVID-19 pandemic, but that didn't stop her from drawing the interest of a Division 1 program.

Last week, Athanas, a senior at Manchester Essex, officially signed her letter of intent to play lacrosse at Georgetown University in Washington, D.C. next fall.

"Playing Division 1 has been a big goal of mine for a while and it's a dream come true to finally sign that letter to make it official," Athanas said. "Georgetown really stood out during the recruiting process. I loved the campus and it seemed like a close knit team. I wanted to be part of that."

Athanas is one of the most versatile players in the Cape Ann League and she showed off those skills as a sophomore in 2019 when she was a league All-Star and helped the Hornets lacrosse team reach the Division 2 State Finals.

As a sophomore she played a key role in all of the team's victories.

"That was a great season and I was really lucky to be able to play on a team so good," Athanas said. "It was a crazy experience, the best month of my life."

In the midfield, Athanas is heavily involved in both offense and defense as one of the few players on the field that can play on both sides of restraining line at midfield. She has the quick feet and athleticism to defend some of the top offensive players on the opposing team. Offensively she has the speed to get to the net and is a great possession player that never seems to lose control of the ball.

Those skills drew the attention of Georgetown in her sophomore season and she verbally committed to the D.C. school last fall before making it official last week.

Without a junior season, she kept her skills sharp by playing club lacrosse.

She may be playing lacrosse in college, but Athanas' athletic prowess at Manchester Essex spans three sports. She is a multiple time CAL All-Star and midfielder on the field hockey team, which won the CAL championship in all four years she was on the team. Her field hockey skills are very similar to her lacrosse skills as she is a two-way player that covers tons of ground on the field.

She is also a standout guard on the basketball team in the winter. Her athleticism makes her a defensive standout on the perimeter and she is also a reliable ball handler.

Athanas was also recognized by the MIAA as its Student Athlete of the Month for September thanks to her play in field hockey.