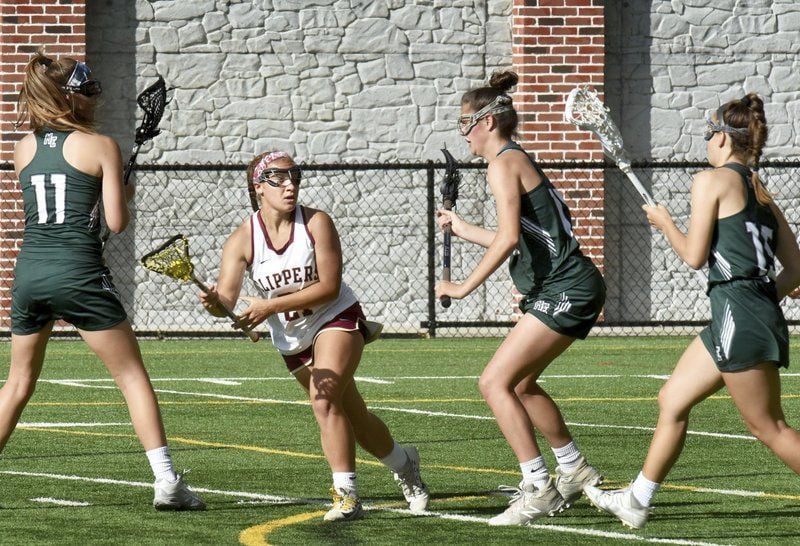 BRYAN EATON/Staff photosNewburyport attack Samantha King has nowhere to go as she is surrounded by Manchester Essex defenders. The Hornets defense was on point all night in a 7-6 win in the Division 2 North Finals. 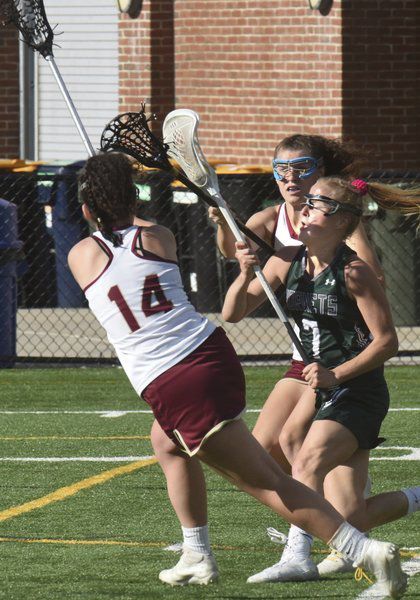 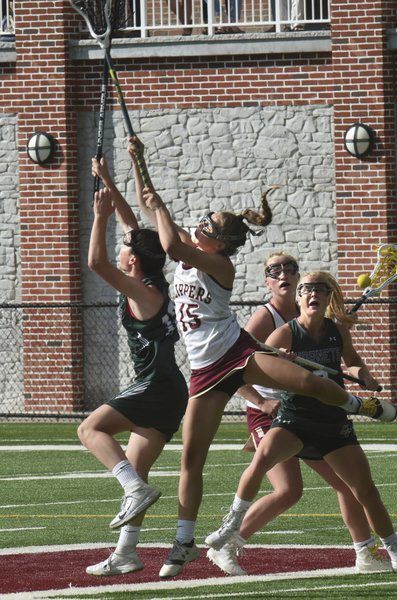 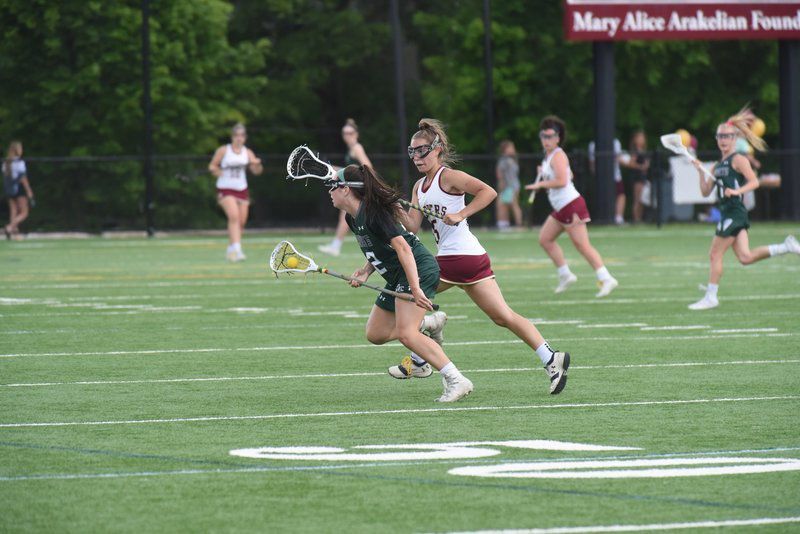 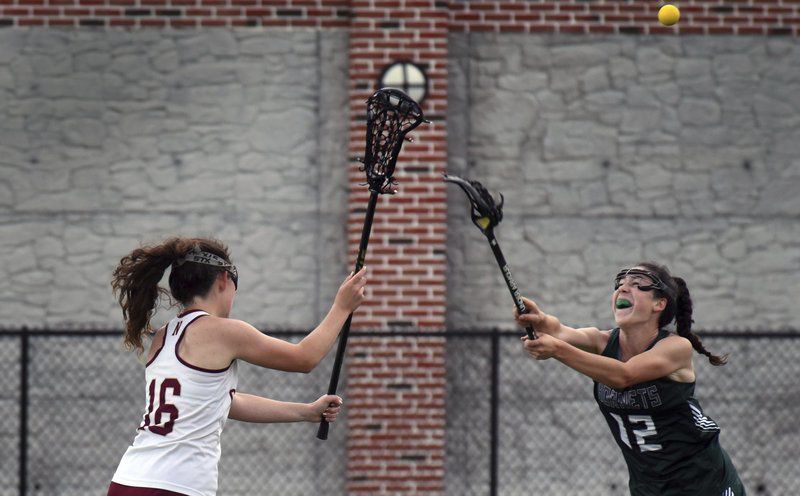 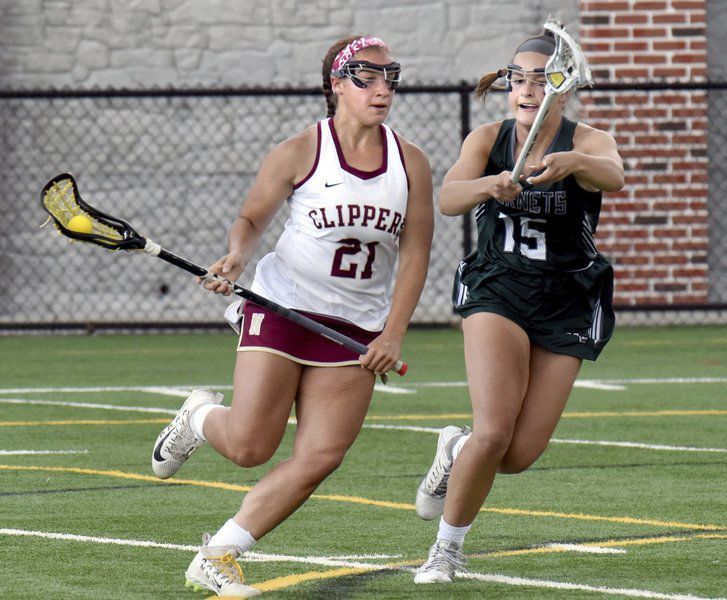 BRYAN EATON/Staff photosNewburyport attack Samantha King has nowhere to go as she is surrounded by Manchester Essex defenders. The Hornets defense was on point all night in a 7-6 win in the Division 2 North Finals.

NEWBURYPORT-- The two times the Manchester Essex and Newburyport girls lacrosse teams met in the regular season, the game was decided by a single goal with each team picking up a win. It was only fitting that Friday’s Division 2 North Final at Newburyport High School would once again be decided by just one goal.

With a standout defensive effort and smothering possession in the second half, it was No. 4 Manchester Essex that edged out No. 3 Newburyport, 7-6, to take home sectional crown and avenge last season’s loss to Newburyport in this very game.

“That was brilliant,” said Manchester Essex head coach Nan Gorton, whose team moves to 16-5. “We played a really smart game and always knew the situation. And we stayed composed, which can be tough in a final because there’s so much emotion.”

“I thought Manchester Essex outplayed us by a lot and deserved the win,” she said. “We’re a young team out there and we just weren’t able to adjust to some of the stuff Manchester Essex was doing, especially defensively, we could never really get our attack going.”

It was the Hornets who needed to do the adjusting early as Newburyport (15-6) got off to a red hot start with the game’s first three goals, all from Katelyn Hadden.

Manchester Essex started the game face guarding Newburyport attack Samantha King, and that opened up room for Hadden to take control. Gorton called a timeout with 18:10 to go in the half and settled her team down.

“I think we over thought our game plan,” Gorton said. “We went back to keeping it simple, keeping it to what we know instead of out thinking ourselves.”

With a more traditional approach, the Hornets took control of the game from there, dominating possession and outscoring the Clippers, 7-3 the rest of the way.

Manchester Essex would go on to finish the half with six of the next eight goals. Emma Cochand put the Hornets on the board when she put home a pass from Gianna Huet. Abby Lantz struck just under three minutes later to make it a one-goal game.

After Newburyport’s Callie Beauparlant and Manchester Essex’s Lily Athanas traded off goals, the Hornets took their first lead of the night with two goals in 23 seconds. Lantz tied the score at four and Cochand again converted on a pass from Huet to give the eventual sectional champs a 5-4 lead with just over seven minutes to go in the half.

Hadden tied the score with under four minutes to go, but Cochand again found the back of the net to give the Hornets a 6-5 lead at the break.

Lantz extended that lead to 7-5 at 3:36 of the second half, and the game took a defensive turn from there.

The Hornets started to control possession and kept the Clippers out of the offensive side of the field for the majority of the time remaining.

“The girls knew they had to play their game,” Gorton said. “We stick to short passes and really try to keep possession. Sometimes it’s the smarter move to slow it down and work your chances instead of pressing for another goal.”

Hadden scored her fifth of the game with 4:34 left, but the Hornets won the ensuing drive and bled three more minutes off the clock before the Clippers forced a key turnover. That final possession, however, came up empty as the Manchester Essex defense, led by Christina Calandra, Gace Gist, Dianne Rodier and Molly Brady, stayed in position and did not allow a high quality scoring chance. The Hornets regained possession with 30 seconds left and let the clock run down for the win.

“They were playing slowly but we just weren’t adapting to it,” Batchelder said. “We couldn’t find a way to figure out the game management and get the ball back enough times.” Manchester Essex senior goalie Bella Pomeroy, the Cape Ann League Baker Division’s Player of the Year, was a huge factor in Friday’s win. Pomeroy made 10 stops, none more important than a four stop flurry, including two on penalty restarts in close, with just over 10 minutes to go. She stopped three penalty restarts in the second half.

“She makes so many key saves, she’s an All American goalie in my opinion,” Gorton said. “When we get into those eight meter situations, it’s an advantage for us because she’s so good at stopping them. She can see the ball so well and always knows where it’s coming from.”

With the Division 2 North title in tow, the Hornets now turn their focus to the Division 2 State Semifinals against Central/West champ Bromfield. The game will be played at Babson College, date and time are still TBA.