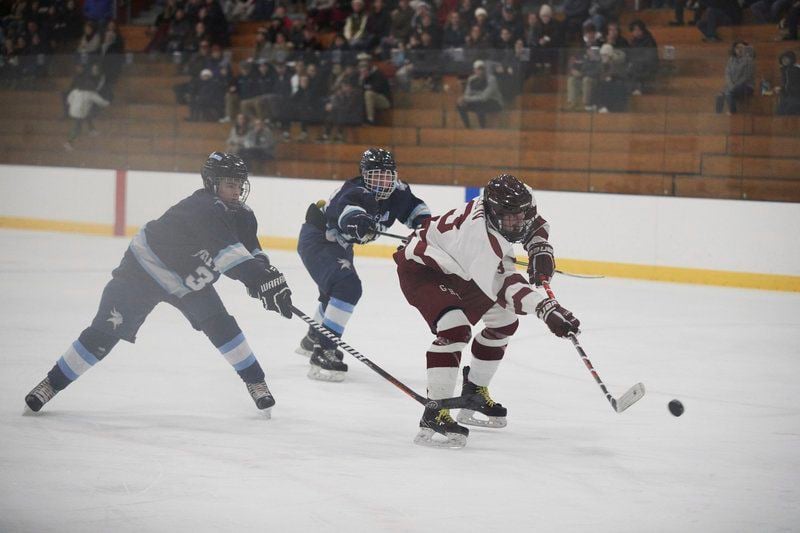 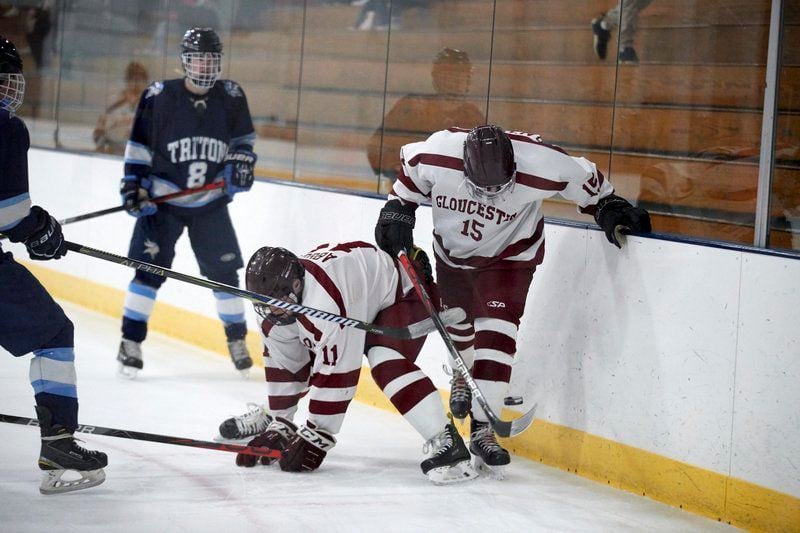 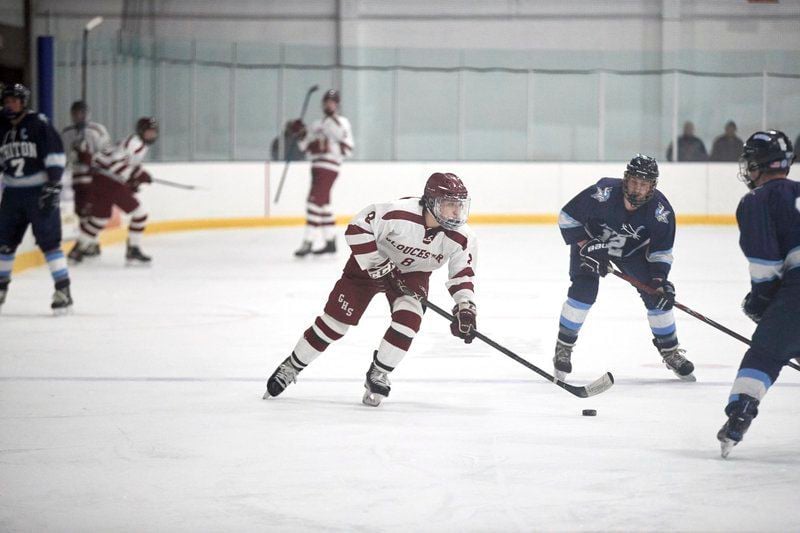 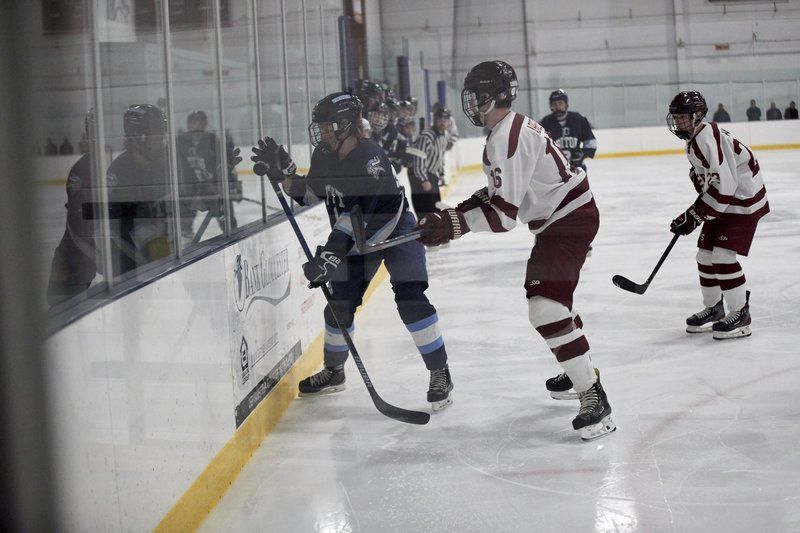 Jared Charney PhotoGloucester defenseman Jeremy Abreu battles for possession along the boards with Triton's Jack Niska in Saturday's game at the Talbot Rink. 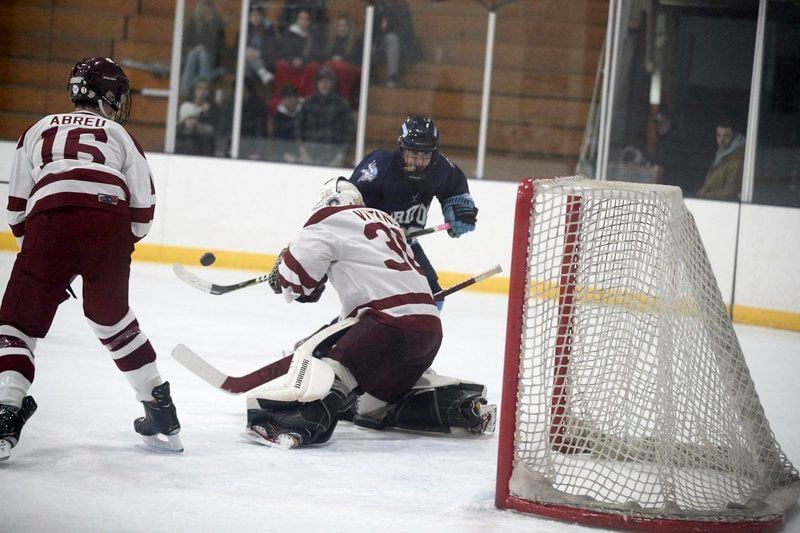 Jared Charney PhotoGloucester goalie Connor Vittands makes one of his 31 saves against Triton on Saturday.

Jared Charney PhotoGloucester defenseman Jeremy Abreu battles for possession along the boards with Triton's Jack Niska in Saturday's game at the Talbot Rink.

Jared Charney PhotoGloucester goalie Connor Vittands makes one of his 31 saves against Triton on Saturday.

The early season struggles continued for the Gloucester hockey team on Saturday night against Triton at the Talbot Rink.

The Fishermen beefed up their early season schedule with three straight difficult, non-conference games; and after a 5-1 loss on Saturday, the Fishermen fall to 0-2-1 on the early season.

"We have a tough schedule this year and that's what you want, this Triton team is good," Gloucester head coach Derek Geary said. "But we're still trying to figure out who wants to compete. It's one thing to lose to a good team, but I feel like we were out-hustled too."

Triton displayed its dominance from the opening face-off, eventually outshooting the Fishermen 36-17.

Behind a strong forecheck, the Vikings controlled play all night, breaking out to a 2-0 first period lead and never looking back.

"The forecheck was good tonight and our transition was good," Triton head coach Ryan Sheehan said. "Our defensemen moved the puck well and that led to good entries and a good forecheck."

Cael Kohan opened up the scoring just 1:39 in when he found some open space in the slot while on the power play and put home a wrist shot. Brad Killion extended that lead to 2-0 with four minutes left in the opening frame, putting home a pass from Ryan Lindholm.

Gloucester found some life early in the second when E.J. Field stole the puck from a Triton defenseman and finished a breakaway attempt with a forehand shot to cut the deficit to 2-1 at the break.

The Fishermen were hampered by penalties early on as they were whistled for three infractions in the first period, including a major boarding penalty, and played 6:18 of the first 11 minutes short handed.

"We're a young team and that has to be said, and will still carving out roles," Geary said. "Right now we don't have the depth to withstand playing shorthanded for that long. The important thing right now is to establish more discipline and consistency moving forward."

The 2-1 score stood for the first 10 minutes of the second period. But Triton's pressure eventually paid off as it strung together a few good shifts, eventually leading to a James Tatro goal on a rebound to make it 3-1.

Just over three minutes later, Tatro struck again with a shot from the lower left circle to extend Triton's lead to 4-1 after three.

"We play three lines and all three are pretty good so that helps keep fresh legs out there for us," Sheehan said. "And we have some good seniors on defense that kept the front of our net clean all night."

Killion added his second goal of the night early in the third, putting home a pass from Mike Beevers for a short-handed tally to cap the scoring at 5-1.

The Fishermen return to action on Friday and Saturday in the 13th Annual Cape Ann Savings Bank Holiday Tournament at Talbot Rink.

Gloucester takes on Westfield in the tournament opener on Friday (6 p.m.) with Beverly and Marblehead playing at 8 p.m. The winners will meet in the tournament final on Saturday night at 8 p.m. with the losers playing in the consolation round at 6 p.m.